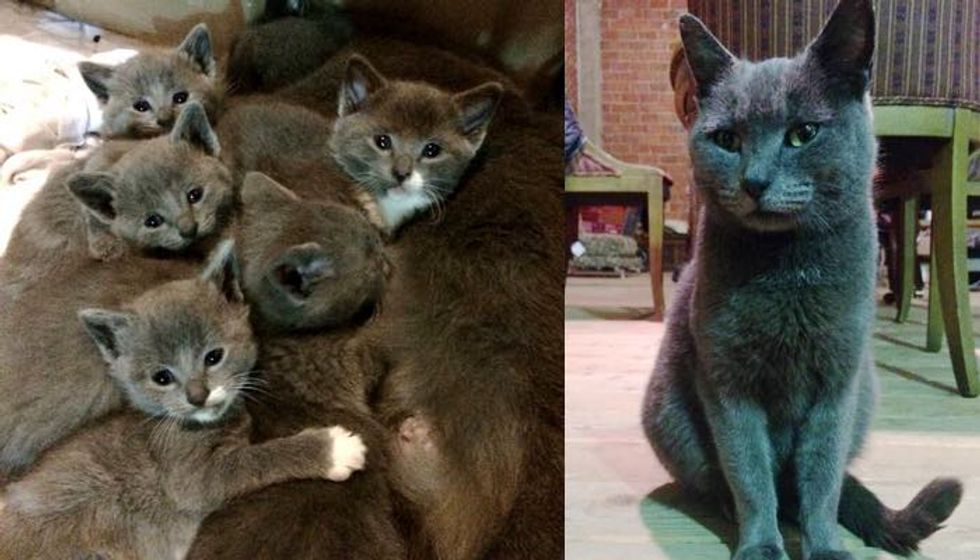 Family Saves Stray Cat from the Cold, She Brings Them a Gift 3 Weeks Later...

They let an adorable grey cat into their home when the weather was getting cold.

Three weeks later she gave them the most precious gift.

A stray cat was wandering outside in the neighborhood during the bitter cold. "She was so thin and missing teeth the night we let her in," reddit user treebeards_friend said.

They named her Tiny Cat as she was very tiny and thin. Her belly started to get rounder each day...

At first they thought she was just getting healthier and putting on weight, but soon they realized the stray kitty came with a surprise.

Her belly was ready to pop.

She brought five tiny grey furballs into this world. They are the mini version of their mama.

Turns out, Tiny was pregnant when she came to the family, looking for a safe place for her kittens.

"The largest kitten was named Dozer because he always bulldozed his way to get some milk. Next there was Sleepy (aka Slumpo). He just loves to sleep! Once he even started to doze off during a bath….

"Then you've got the middle cat, Magoo. She is a sweet precious all grey angel who was not quite as graceful as the other kittens and tended to fall off of things a little more."

"The second smallest was another all grey cat that we named Super Tiny! Apparently this kitty now goes for walks on the leash and plays fetch!

"And finally there is our little runt, Nano. She was so small when she was born, but has always been a fighter. Nano had so much attitude and love inside her."

Sweet mama and her babies!

It's a cuddle puddle!

"All amazing little creatures. So lucky to have had them in my life!"

"All the kittens and the mom went to the vet several times for check-ups and shots/fixing before we found them homes.

"Happy to say they all went to good people and we still love that we get to see update shots every so often!"