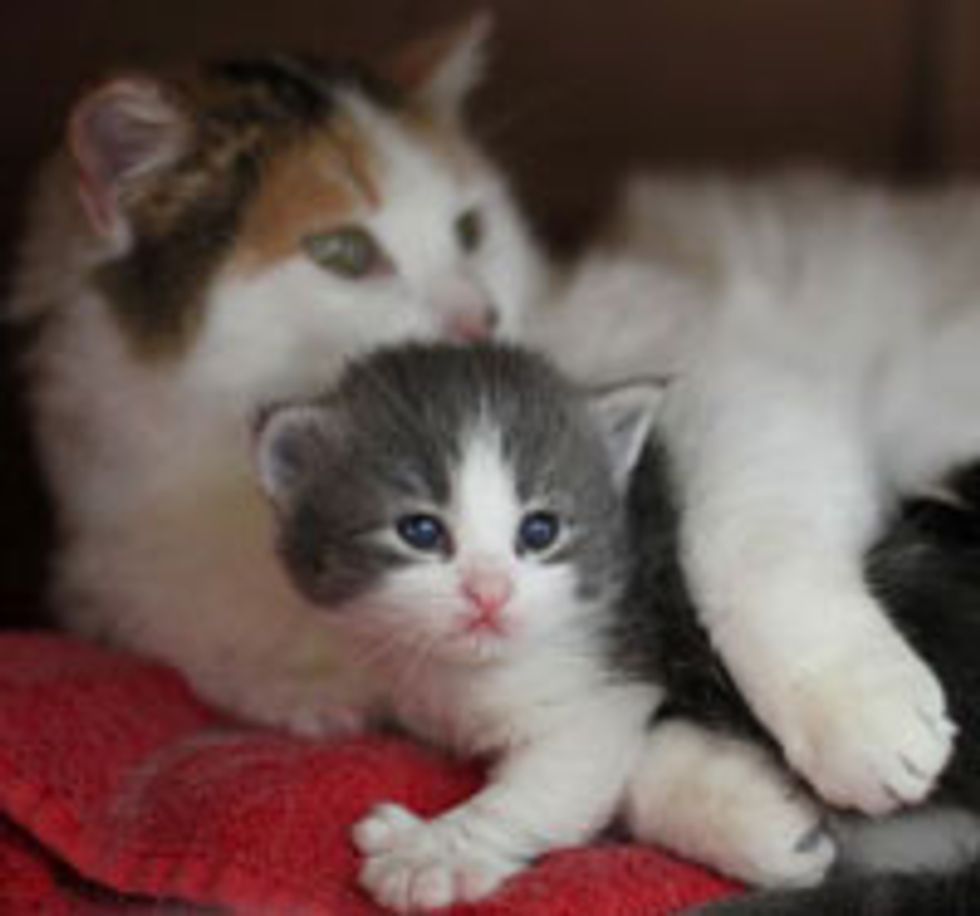 Jean and her friends who run a TNR program spotted a very feral cat with a big belly. They knew the beautiful cat (they named Heidi) was about to give birth. Since Heidi was very feral and had no trust in humans, they made a box for her to nestle in at the farm and let her nurse her babies there.

One day she gave birth to three tiny squirmy little ones. They were fiesty and healthy. Jean had to watch the mama cat from a distance so not to disturb her.

During her regular visits to the farm, she tried everything she could to get closer to Heidi and her brood, but the mama cat's true feral nature kept her from having any trust whatsoever. "Maybe as the kittens learn to trust us, in time, Heidi will, too," said Jean.

Jean and her friends never gave up hope. As the kittens grew bigger and more active, Jean was able to play and interact with them with permission from the mama cat. "I actually could lightly stroke her and she didn't hiss. Progress!"

Indoor life is still a challenge for Heidi, but Jean and her friends are doing whatever they can to help her adjust.

A few weeks after the babies were born, Heidi became more and more comfortable and relaxed around Jean. "I can reach in and touch her comfortably, even stroking her fur, but she apparently hisses at others. I hope she adapts to humans soon. Maybe when her kittens truely play with us." Jean could finally touch Heidi's toes while she was nursing.

As the little ones turned one month and became very playful, two of them were not afraid of people and were very friendly when they saw visitors. Heidi would still stay in her box, but peek out to view the commotion. "I even had the chance to pick out bits of litter stuck between her toes," said Jean.

Heidi has come a long way, even though she has not completely adapted to humans yet, she has made tremendous progress. It may take a while until she feels safe with people, but when that time comes, it would be so worth it.