Rescued Kitten Who Can’t See Very Well, Blossoms When He Finds Someone to Love

A timid cross-eyed kitty was found in a cat colony. He couldn't see very well and needed help. 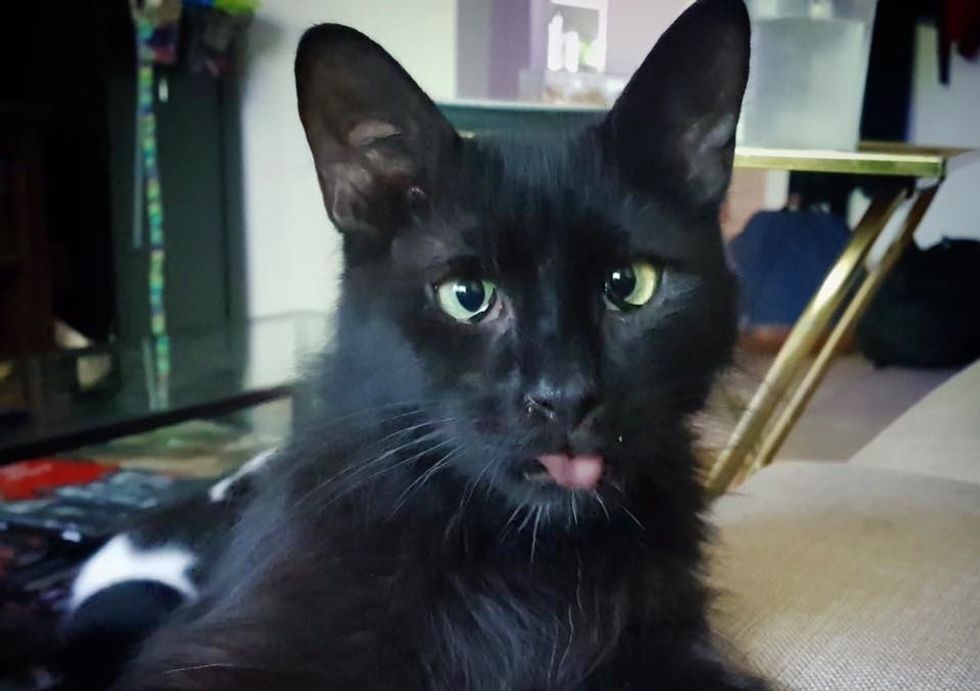 Two months ago, Nadia and a group of TNR (trap-neuter-return) rescuers from Montreal, Canada went to help a colony of cats by getting them spayed and neutered.

She spotted a black kitten who seemed to have some trouble getting around. He was clumsy and fearful of other cats.

The kitty had poor eye sight and needed medical attention. Knowing it would be difficult for him to survive the outdoors, Nadia rescued him and reached out to Chatons Orphelins Montréal for help.

The cat whom they named Marius, was terrified of people as he had never had any human contact.

"We took him to the vet. He was very young and just skin and bones. He was frightened and didn't make a sound, but his heart was beating out of his chest," Celine Crom of Chatons Orphelins Montréal shared with Love Meow. 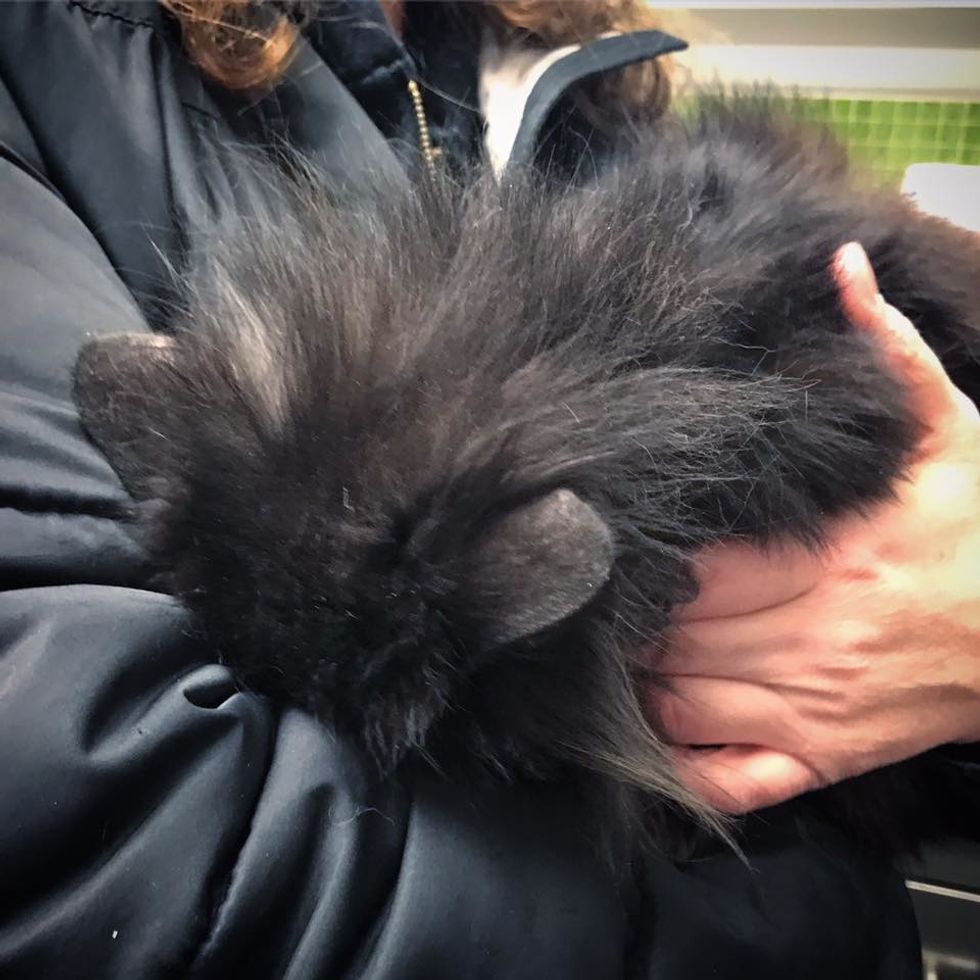 Marius cowered inside his litter box and tried to be invisible by flattening his ears and hiding his face.

After getting some much-needed medical attention, Fran, a foster volunteer, took him home. She was determined to help him trust. 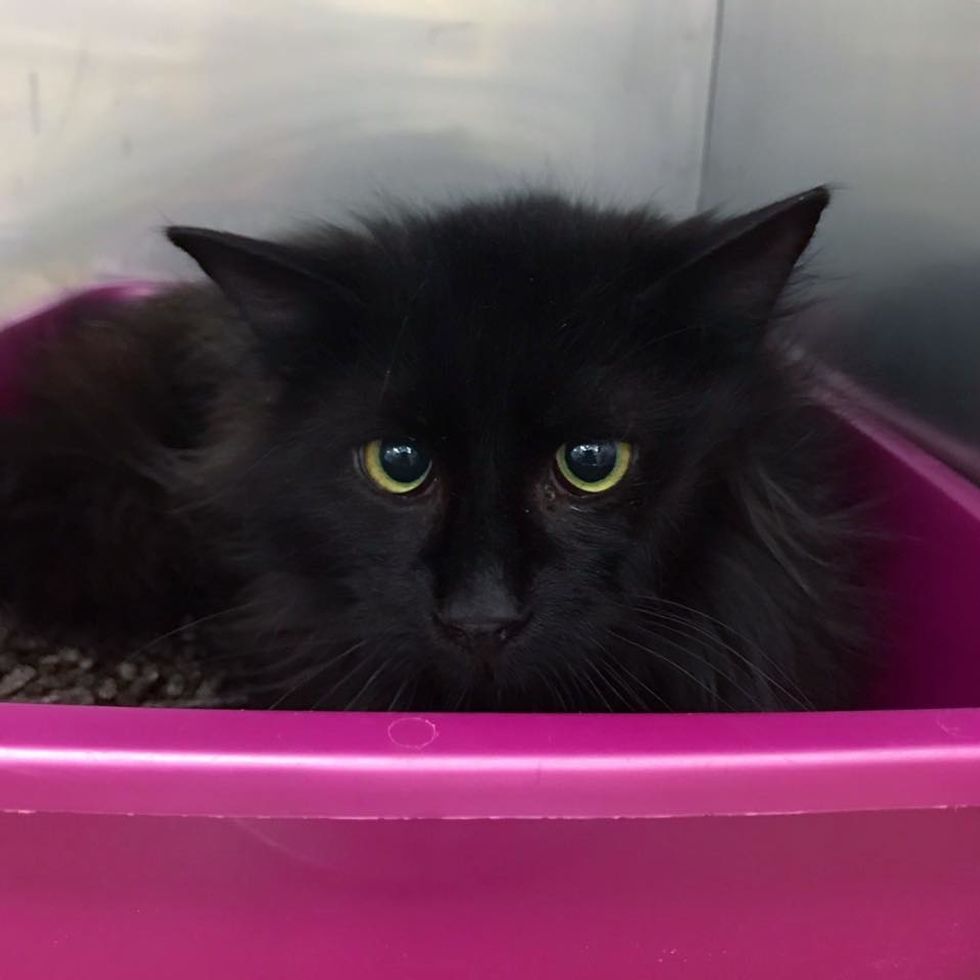 "It was his first time living with a person. It was a challenge, but with time and patience, he slowly came out of his shell," Celine said.

Marius never had a mean bone in his body. All he wanted was some love and reassurance. 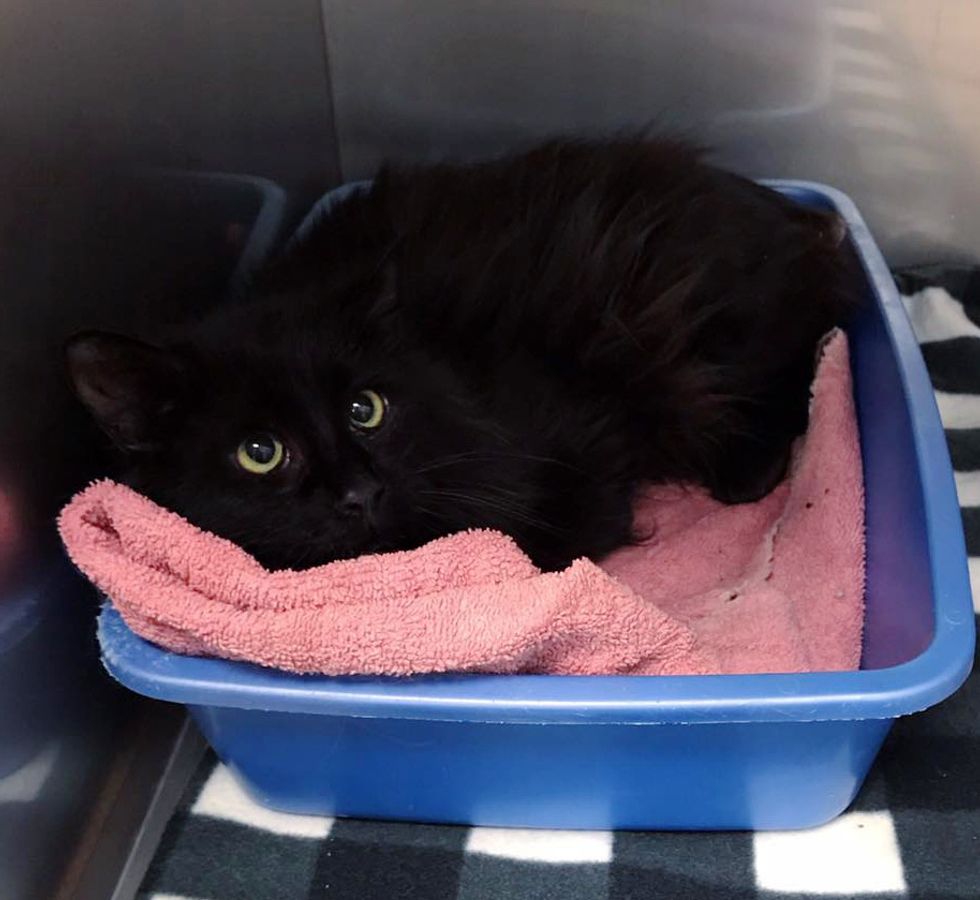 Fran spent a lot of time with him, feeding him and bonding with him. Slowly but surely, he learned that pets were enjoyable and even started to demand attention from his foster mom.

He went from hiding behind furniture when he first arrived to walking around the house with his fluffy tail held up high. 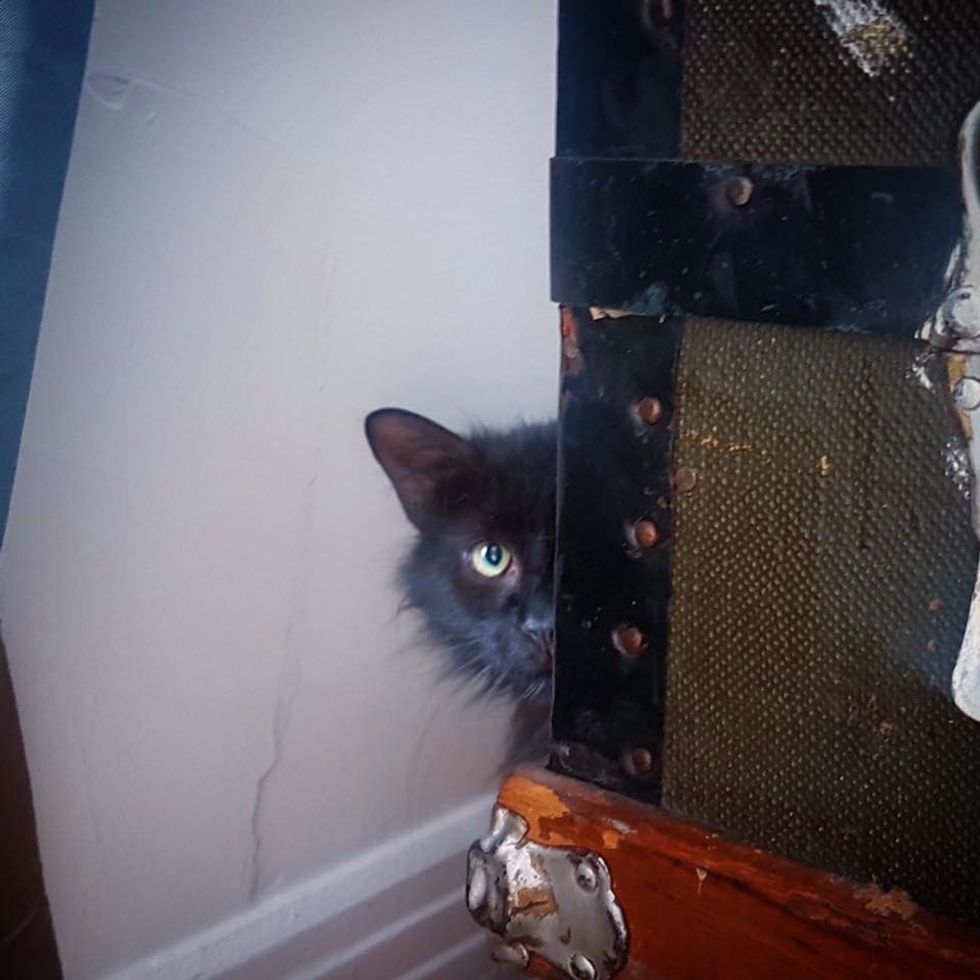 The sweet kitty is getting more confident every day. He has even befriended Fran's resident cat. The two buddies hang out together, keeping each other company.

"He never had any cuddles before we met each other, and now he loves them," Fran said.

Watch the kitty's foster journey in this video:

"Marius had a rough life outside. He managed to survive in the colony even though he couldn't see well."

Sometimes, he may run into things, but this cross-eyed boy lets nothing stop him. He is so happy to have a comfortable, quiet home where he feels safe and loved. 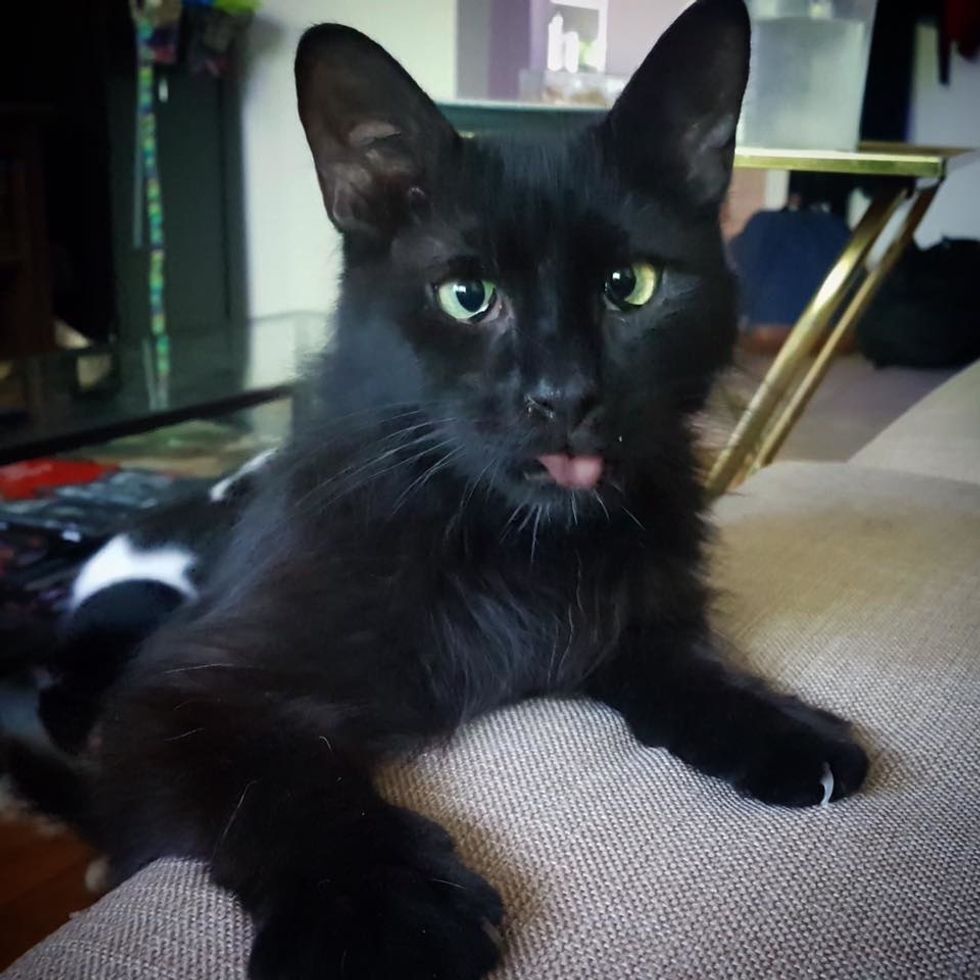 He has come a long way in just two months.

"When he first arrived, he was frightened and lost. He hid his head to pretend that he didn't see us. Now he will roll on his back for belly rubs and cuddles," Celine said.

"Sweet Marius is ready to find a family for life." 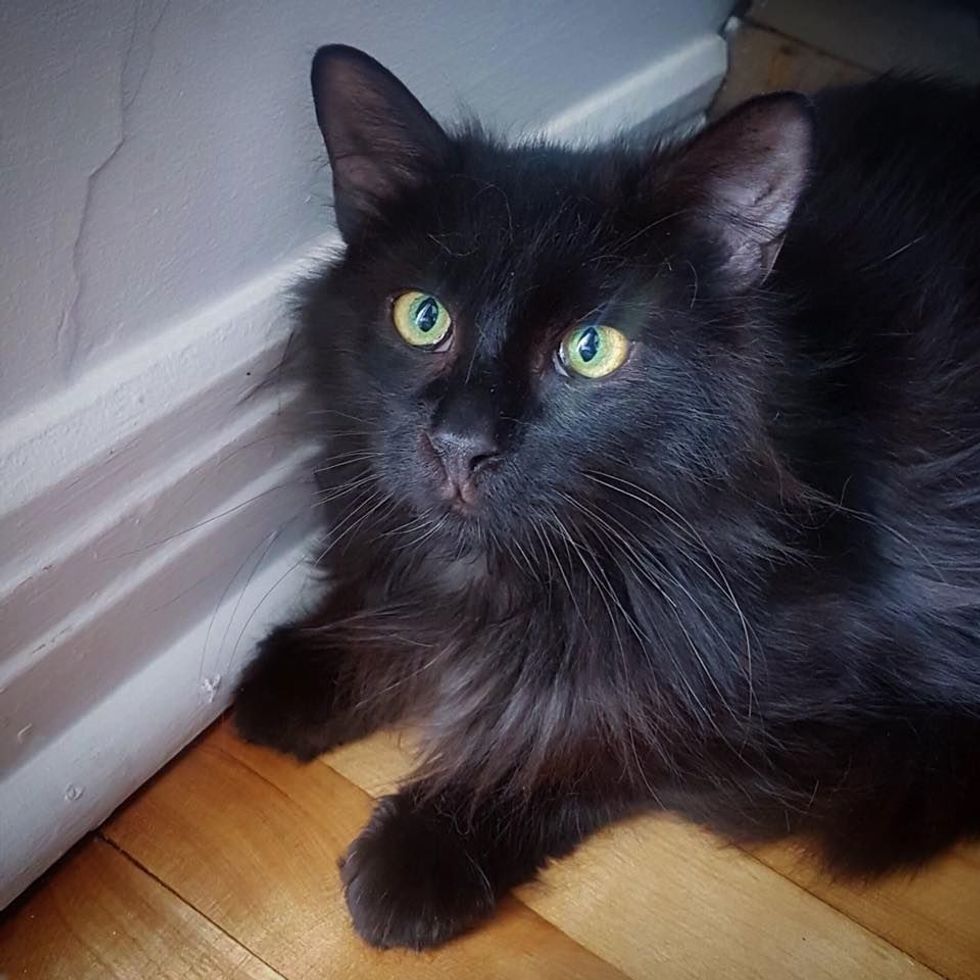