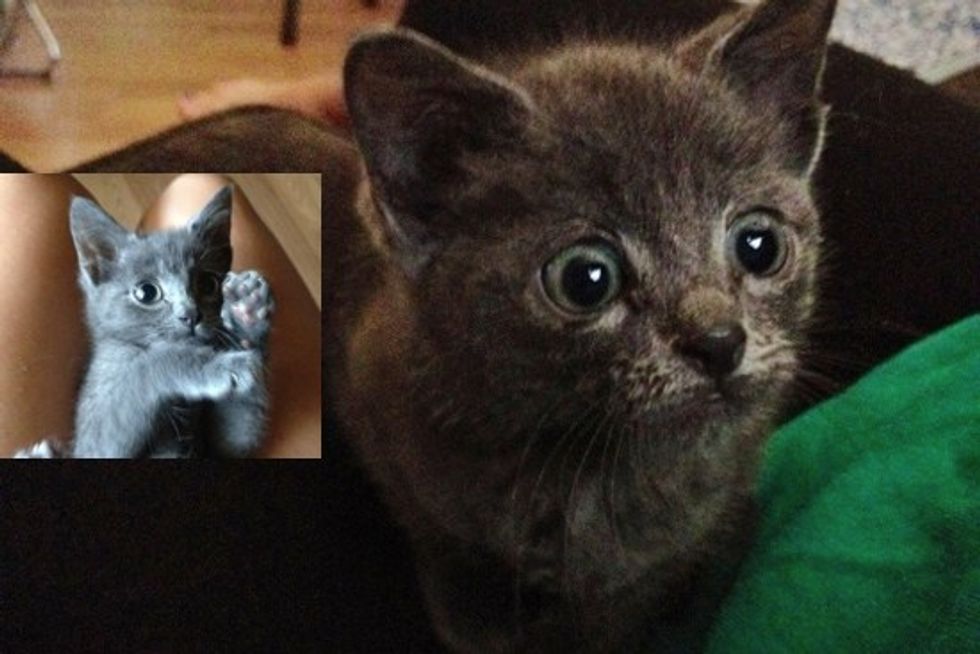 "I was working at a vegetarian restaurant downtown. A customer came in and told us there were some baby kittens in the parking lot (really, it was just a dirt lot next to the restaurant)," said Adriana via reddit. "Our manage went and put them in a box behind the restaurant. It used to be a house, so they were in a fenced in, grassy area.

No one could take this last little guy, so I did despite knowing that my family wouldn't be happy."

When she was told that the kitten might not survive, Adriana didn't give up hope. "When I took him to the vet they told me that he was two weeks old and likely wouldn't live. Not because he was ill, but because he was so young, and I don't think the vet had confidence in me. I had to fee him every 4 hours, and make him poop/pee in the first few weeks but he is super healthy and happy now. He constantly want to be held, and likes to sit on my shoulder when I'm up. His name is Oatmeal," she added.

Oatmeal became very affectionate with Adriana. "We bottle fed him and he didn't really know his mom." Adriana became the kitten's surrogate mom.

"I'm so glad to have him! Even though my family initially didn't want him, they really wouldn't be happy without him, now," she said.

Meet Oatmeal. He was found in a parking lot outside a vegetarian restaurant. "No one could take this last little guy, so I did despite knowing that my family wouldn't be happy," said Adriana.

Curious Oatmeal checking out things at his new home.

"I saved a kitten from the parking lot at work. He's become the most loving pet I've ever had," she said.