A tiny kitten was found in a difficult situation. He was given a new lease on life with help from a former feral cat. 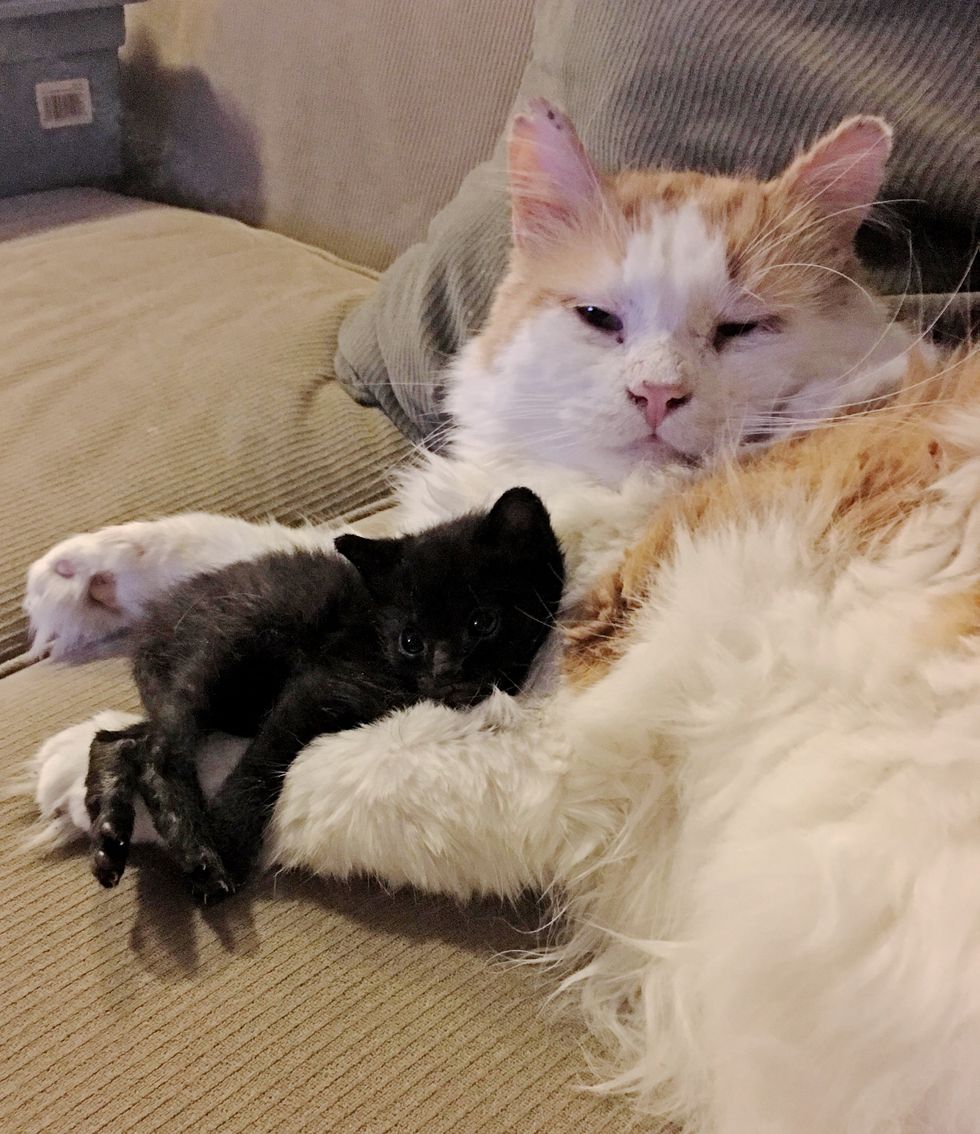 Becky Zielinski, a board member of Hearthside Cats (in Geneseo, New York) was working on a TNR (trap-neuter-return) project at a house where many homeless cats frequent, when she spotted a little black kitten in need of help.

"We have taken in over 40 cats from this house and most come to us in horrific conditions. While checking up on these cats and dropping off food, we came across Teddy, who was in less than ideal shape for a kitten his age," Becky told Love Meow.

The 3-week-old kitten was malnourished, covered in fleas and lice, and very lethargic. Knowing the conditions of the house, and that most of the kittens wouldn't survive, they just couldn't leave him. 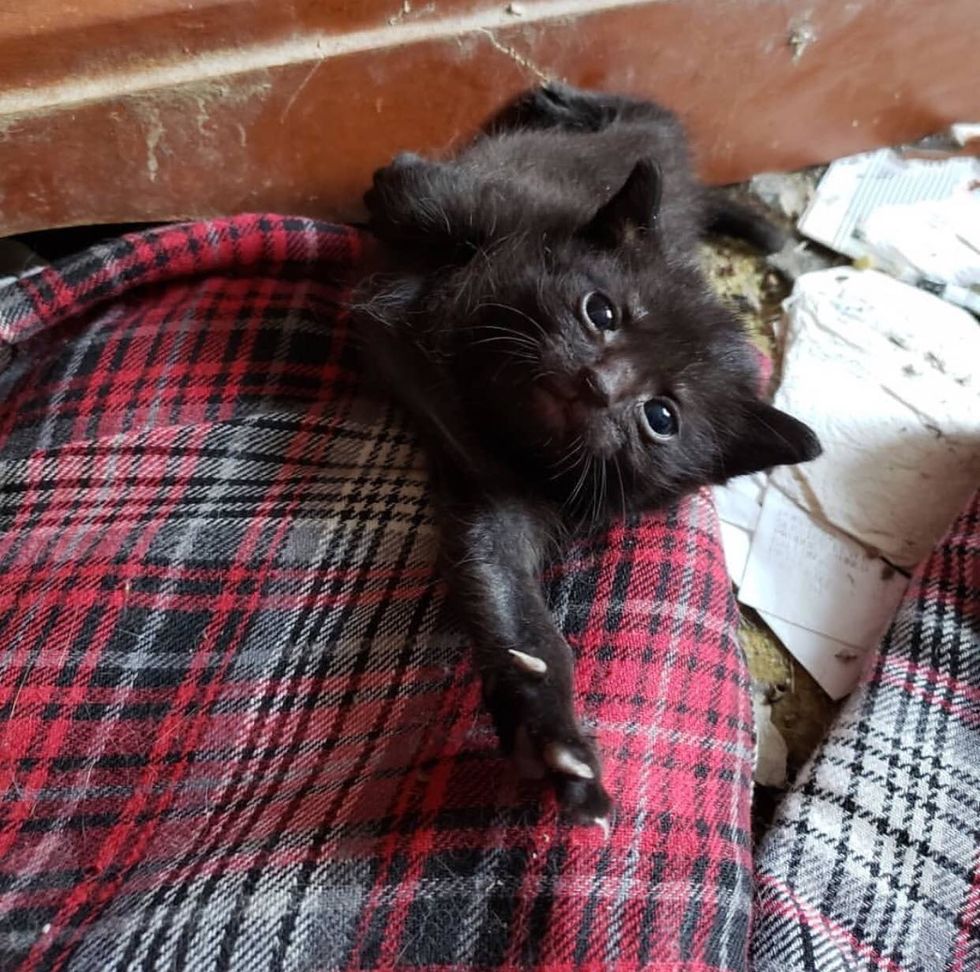 After getting him treated for fleas, lice, worms and parasites, he was placed in a foster home with Becky. "Teddy's first day in foster care was a little tough as he would not eat much on his own, and he did not have a lot of strength," she said.

The kitten needed to be kept warm at all times and to be on a round-the-clock feeding regimen. They tried different ways to encourage him to eat, but Teddy had no appetite or strength. 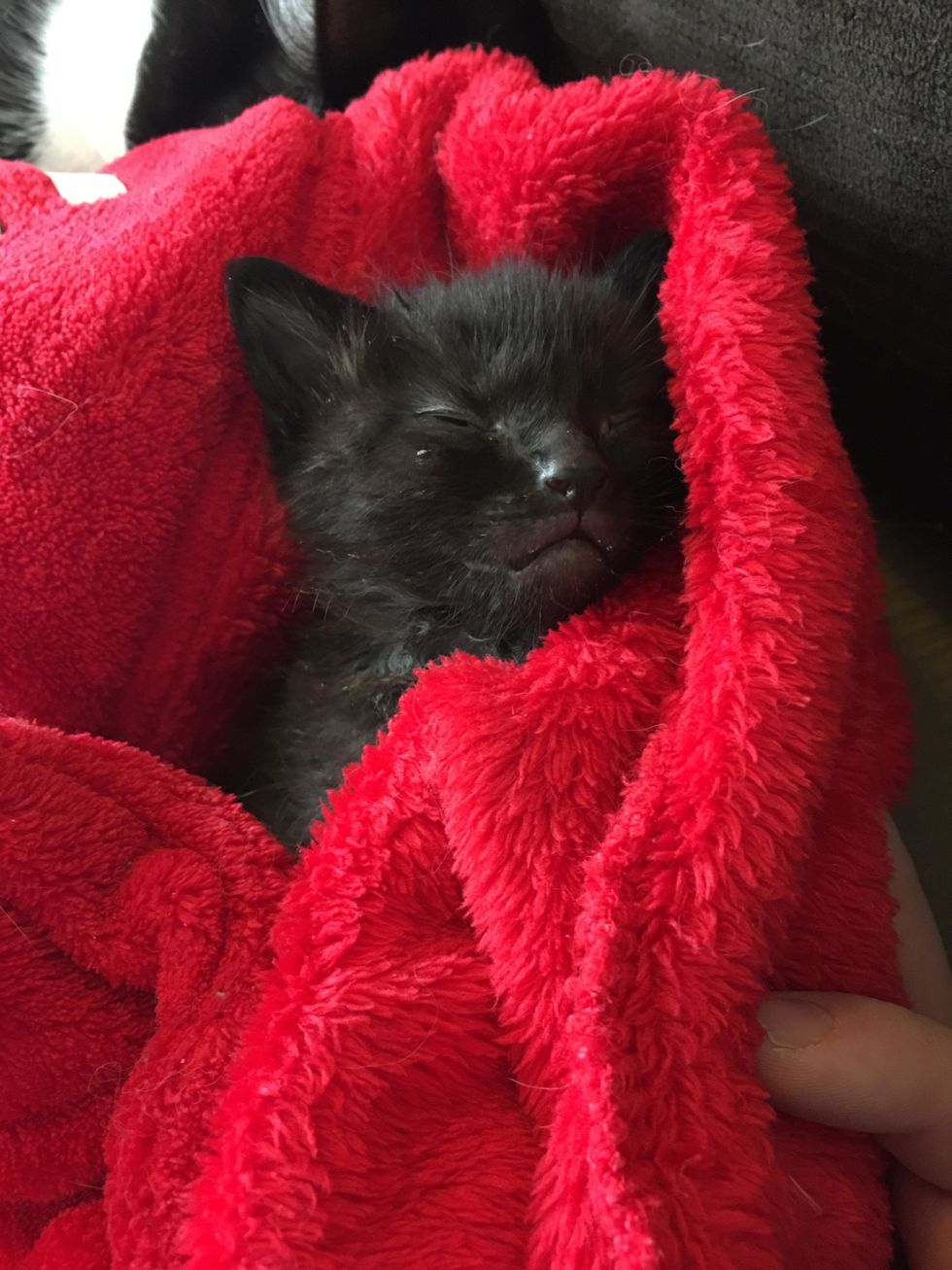 Since he couldn't eat on his own, they began syringe-feeding him every 3-4 hours for three days.

By the end of the third day, his appetite returned and the little one finished a whole plate of food all by himself. It was then they knew he was going to survive. 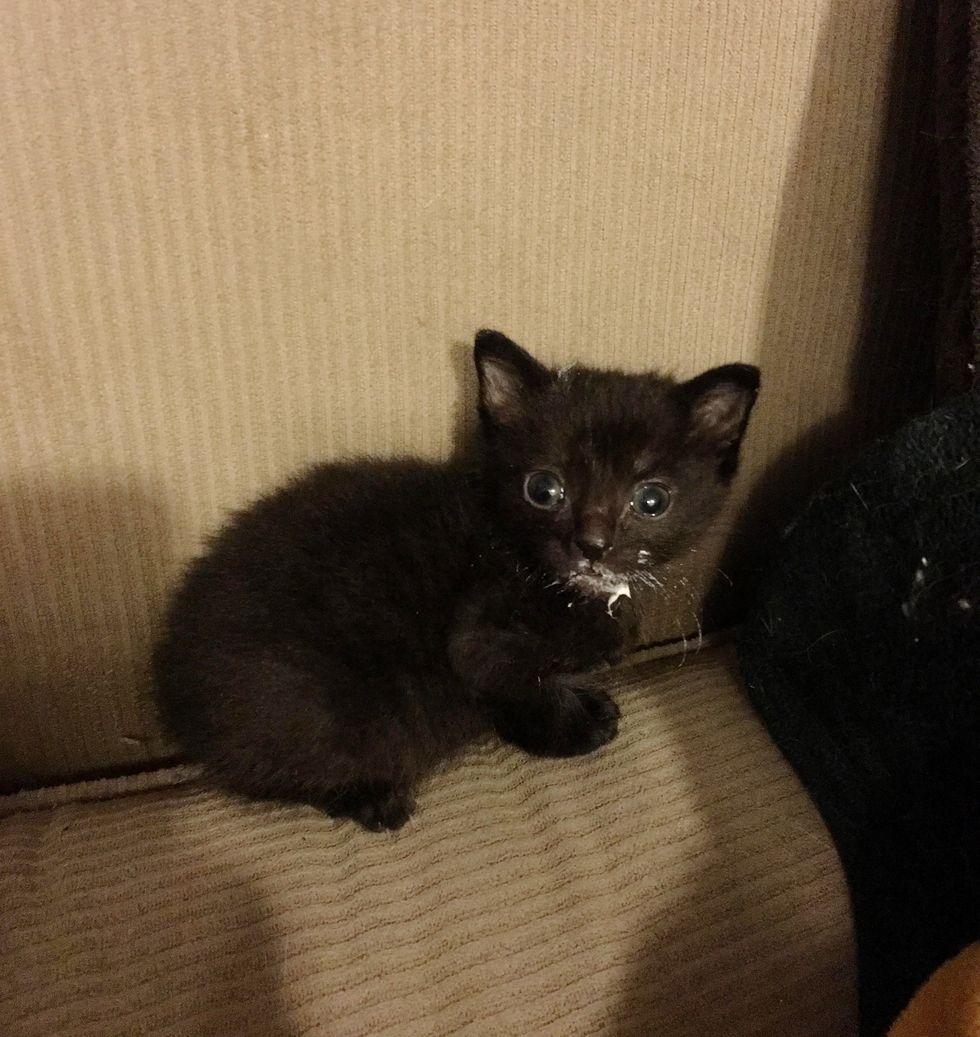 "We noticed that he had finally gained some strength and energy as he spent the day with us running around and playing on the couch," Becky said.

"When he finally fell back asleep, that's when I heard his first purr." 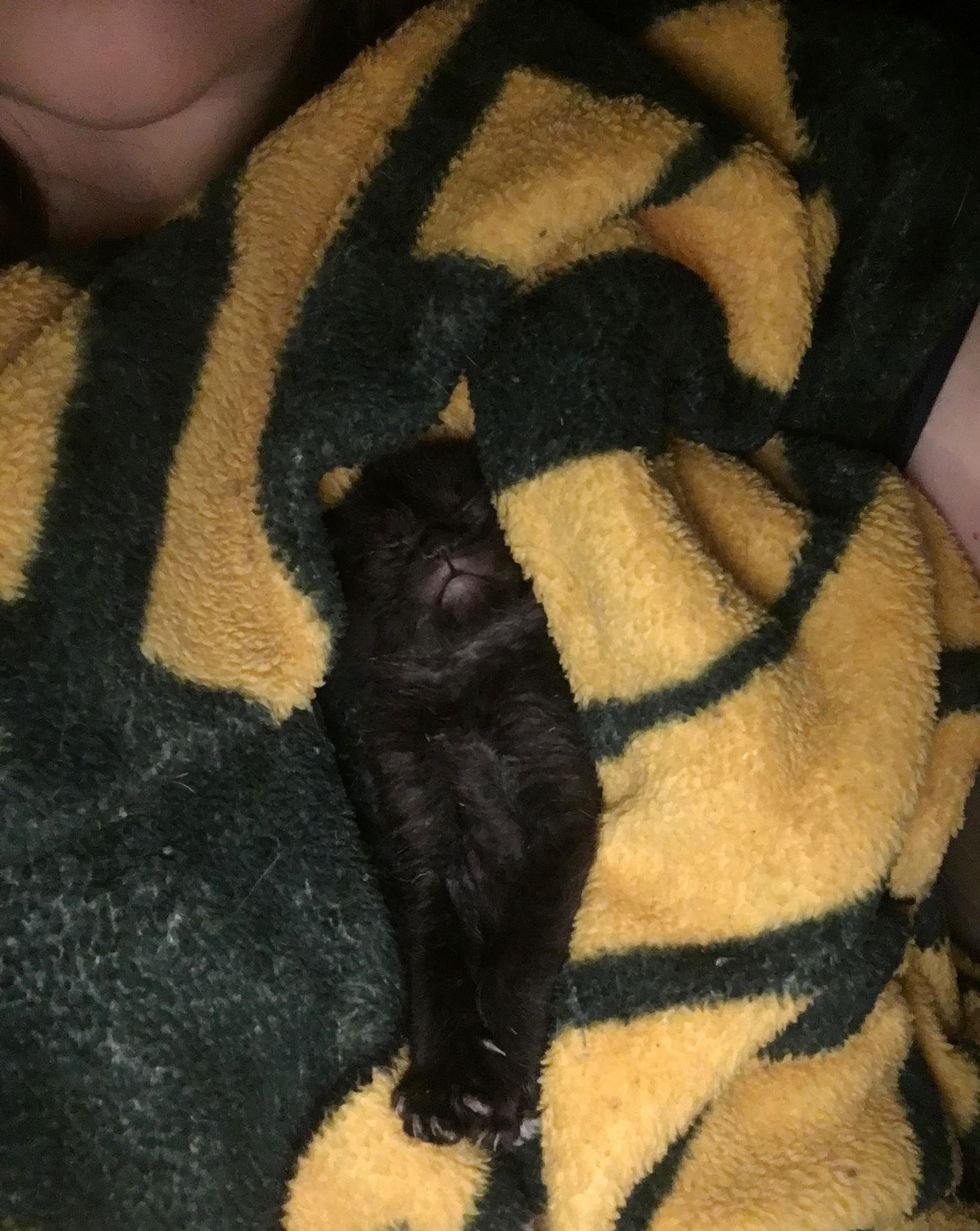 Becky's resident cat Leo has a big heart for kittens in need. When he heard Teddy's cries, he immediately came running and offered a cuddle and a bath.

Just like Teddy, Leo was rescued from a challenging situation. "He was a very injured feral cat that we were told to put to sleep," Becky told Love Meow.

They decided to give him a fighting chance, nursed him back to health and helped him learn to trust. 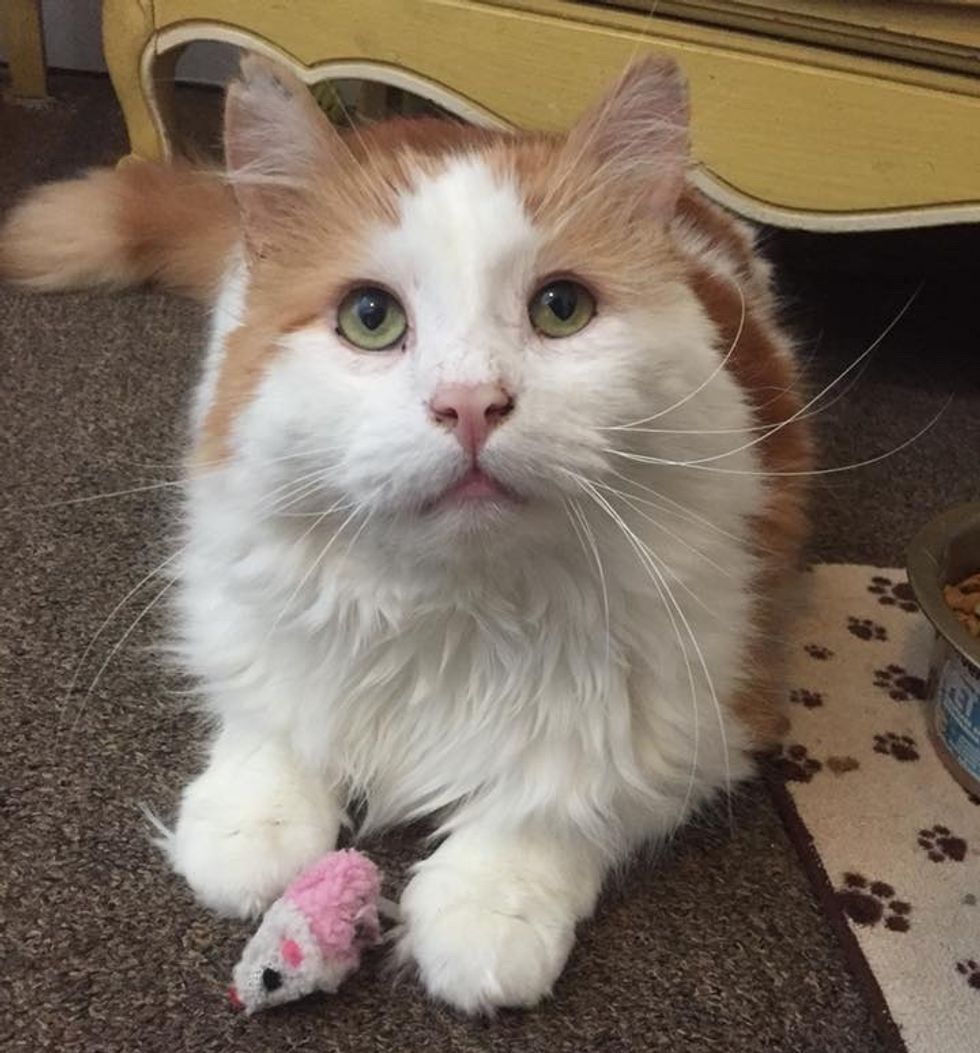 "Now two years later, he is happy and healthy and is the 'Papa Bear' to all of my abandoned foster kittens."

Leo took to Teddy and started caring and grooming him as his own. The little kitty nuzzled right into his arms and fell peacefully asleep in his fluff. 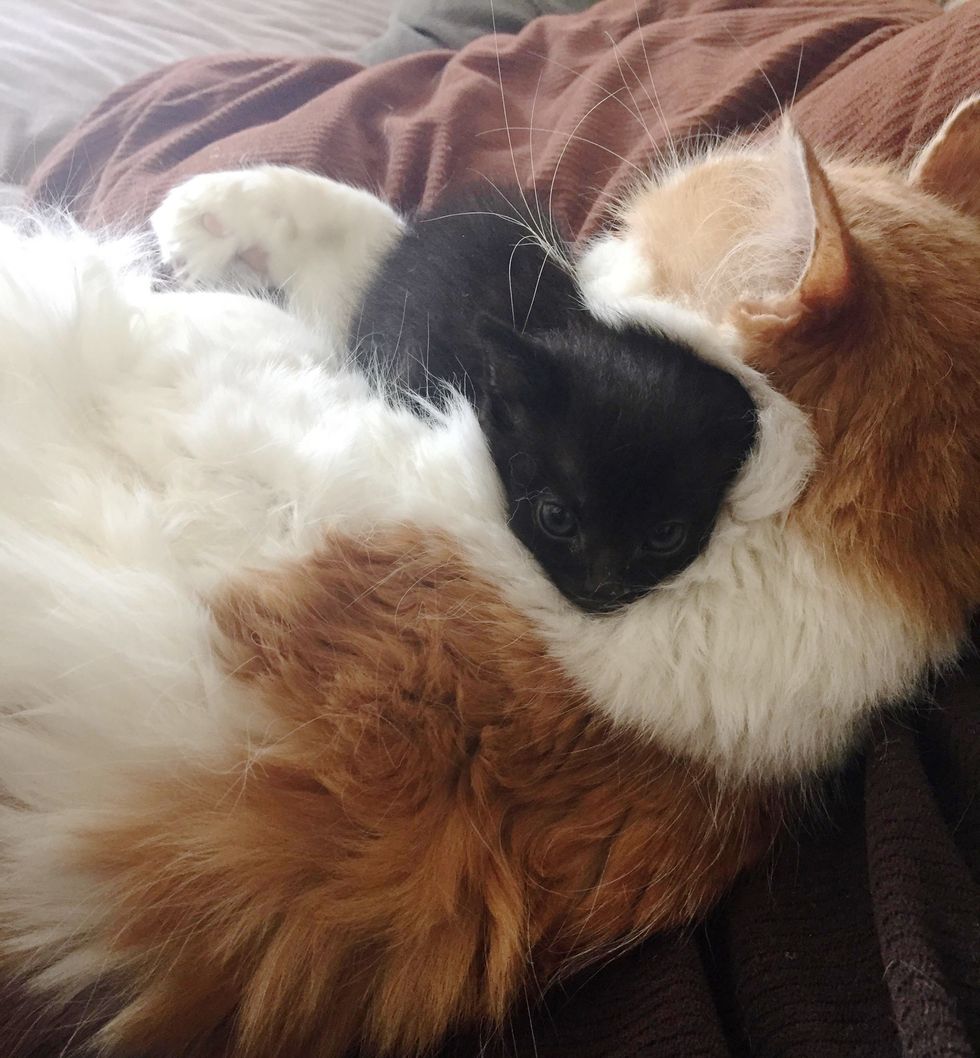 Now, Teddy goes to Leo for comfort. He's become his best friend and someone that he can depend on. "He follows Leo around on the couch and snuggles up to him instantly," Becky said. "It is the next best thing to a 'mother cat' that he has."

"I would like to believe that a mix of love and snuggles from Leo along with the syringe feeding just gave him the will and energy to try on his own." 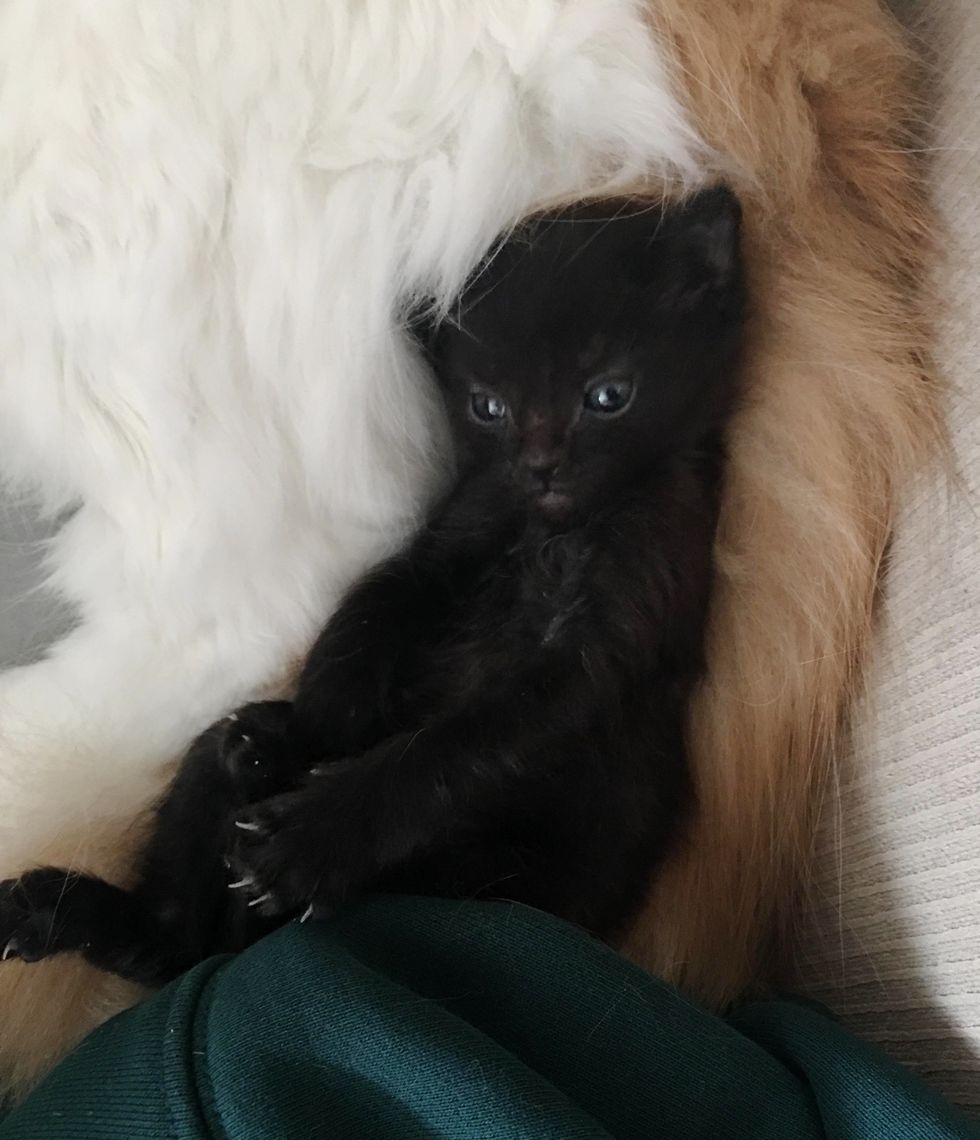 A week after the rescue, not only did Teddy bounce back on his paws, but he found himself a cuddle buddy to love on. 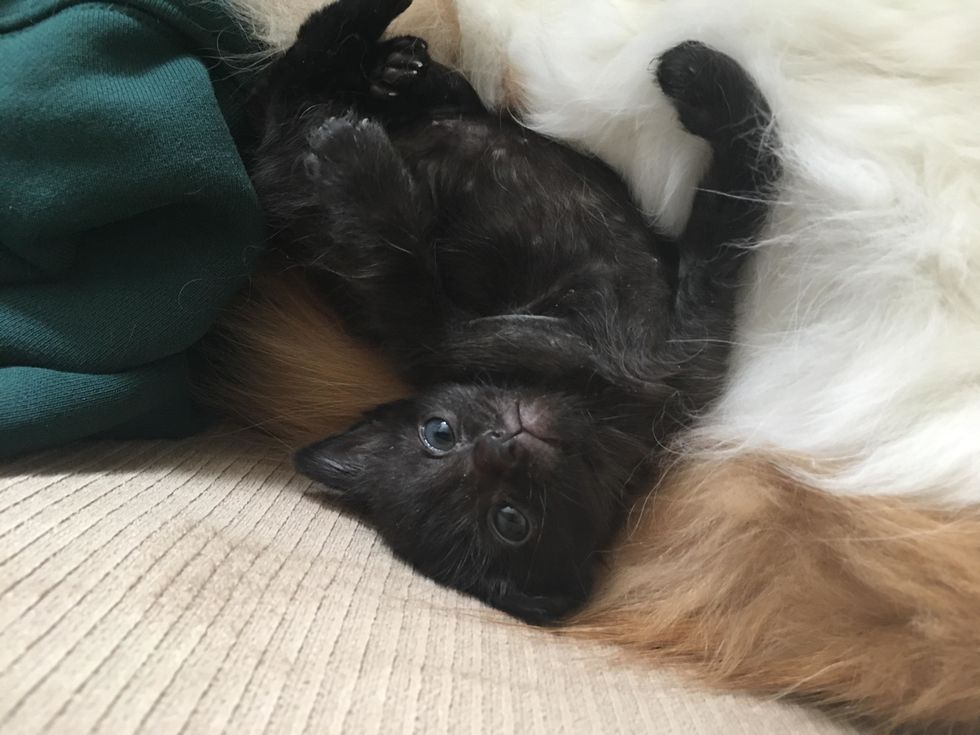