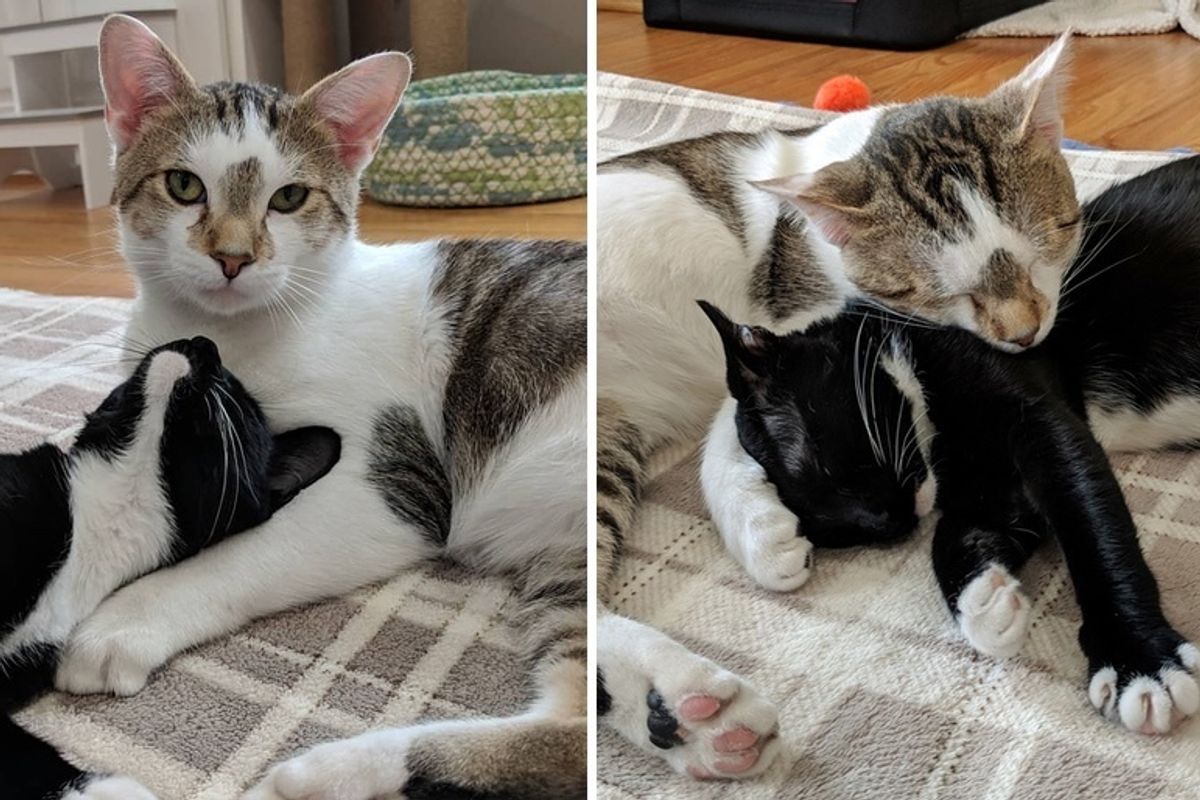 Charles and Caroline, two bonded cats, were brought to a shelter in Alabama.

When shelter volunteers discovered that the tuxedo was pregnant, they knew they needed to get them into a foster home. 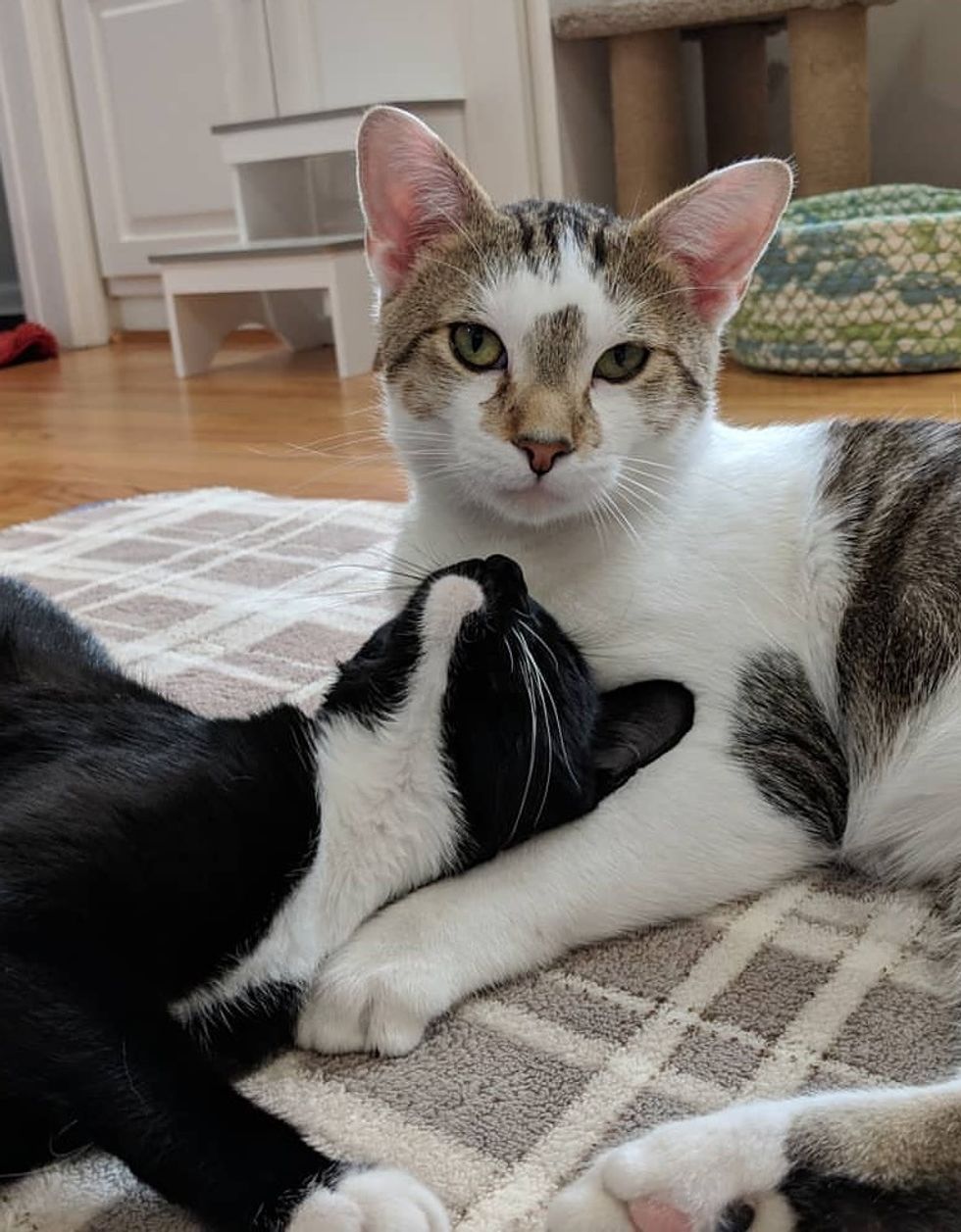 Robyn Anderson, a foster volunteer of Forgotten Felines of Huntsville (in Capshaw), was contacted about the male and female bonded pair.

"Due to a job loss, their owner had to relocate to another state and couldn't take them with her. They came to me in mid-January. We know that Charles is the kittens' father because they were the only two cats in the house," Robyn told Love Meow.

Caroline was very tiny weighing just six pounds when she arrived. She strutted right out of the carrier and explored every nook and cranny of her foster room with her tail held high.

She then snuggled up to her foster mom for pets and love. 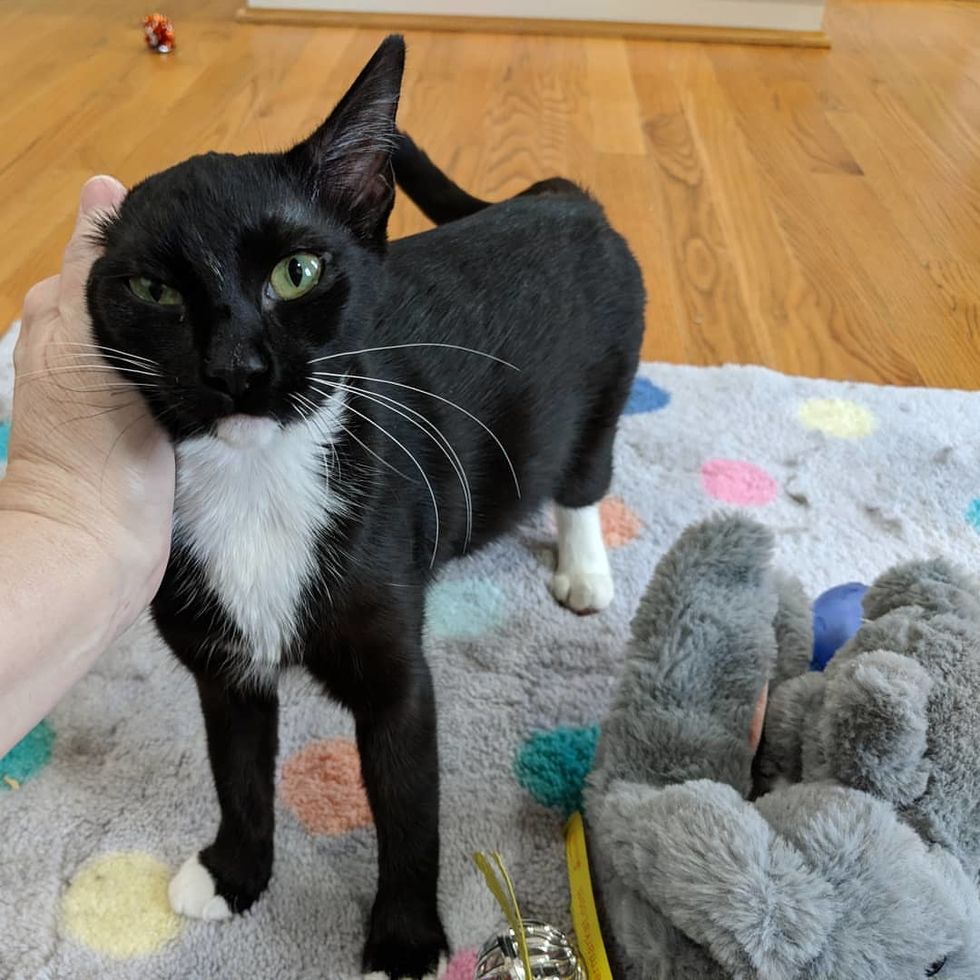 Charles joined his foster family after his neuter surgery. He was almost twice the size as Caroline at 10 pounds and 12 ounces.

Caroline was a bit put off at first when he returned to her, still reeking of the vet, but Charles insisted on following her around and wouldn't take no for an answer. 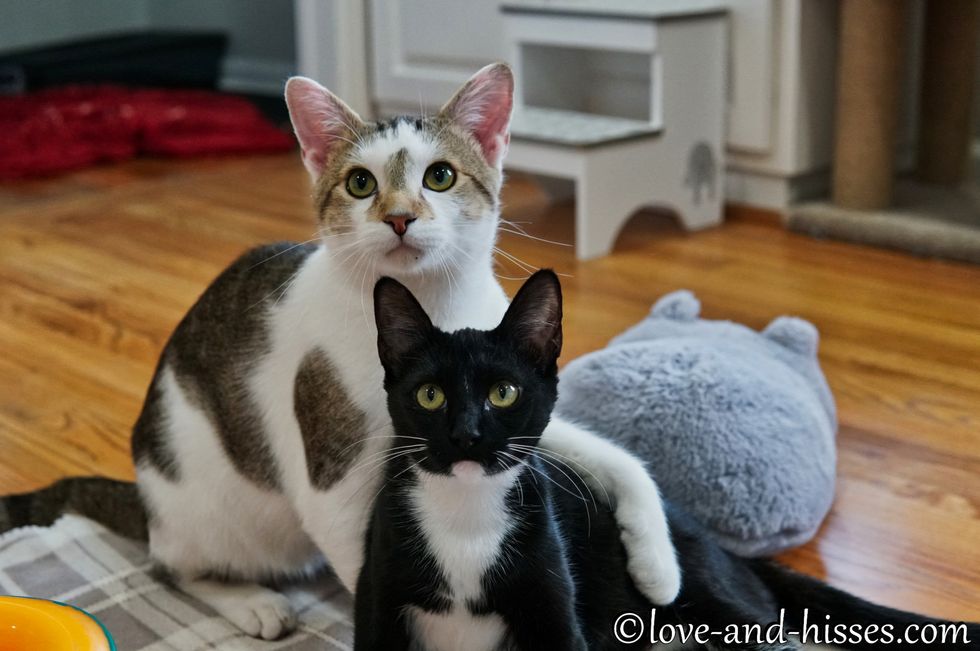 "By Sunday morning, they were eating off the same plate, occasionally licking each other on the head, and playing together," Robyn said.

They set up a birthing place for the expectant mama cat, and both Charles and Caroline took a tour inside. 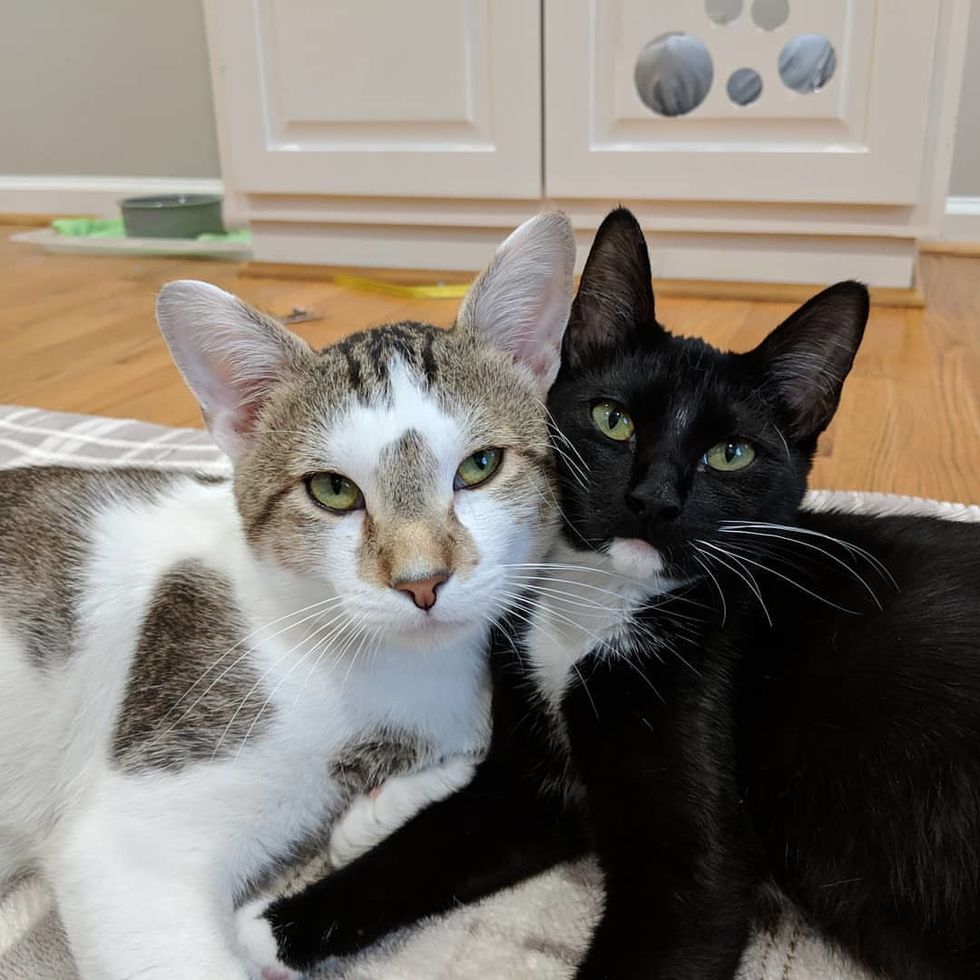 "Despite the fact that she's practically half his size, there's no doubt who's got the upper paw in this relationship. He hangs back and lets her eat first, backs off when she tells him to, and lets her tell him when it's time to play," Robyn said.

"I've never had a father be present when I had a pregnant foster cat before, so it's been a wonderful experience so far." 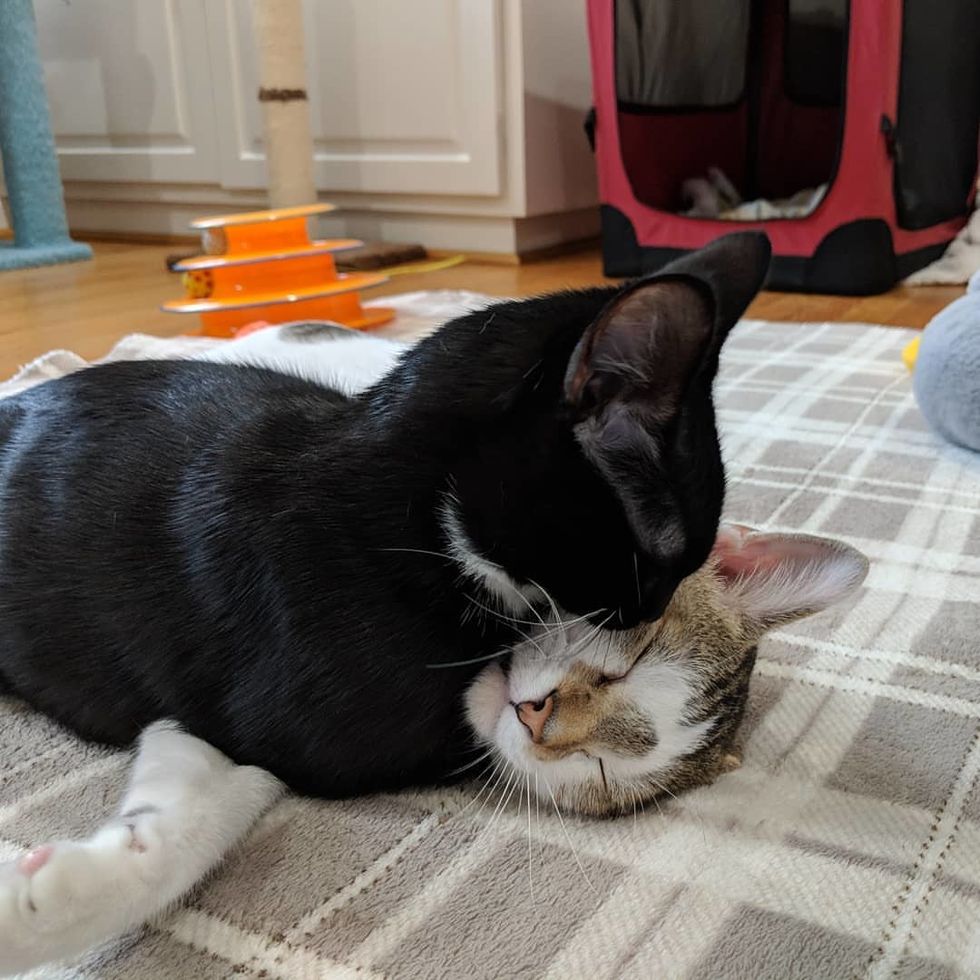 The two are very tightly bonded. Charles is gentle and sweet to Caroline. He always waits for her at meal time, checks on her throughout the day, and in return, Caroline keeps him groomed and cuddles on him when she naps.

"Charles's ears have never been so spotless," Robyn added. 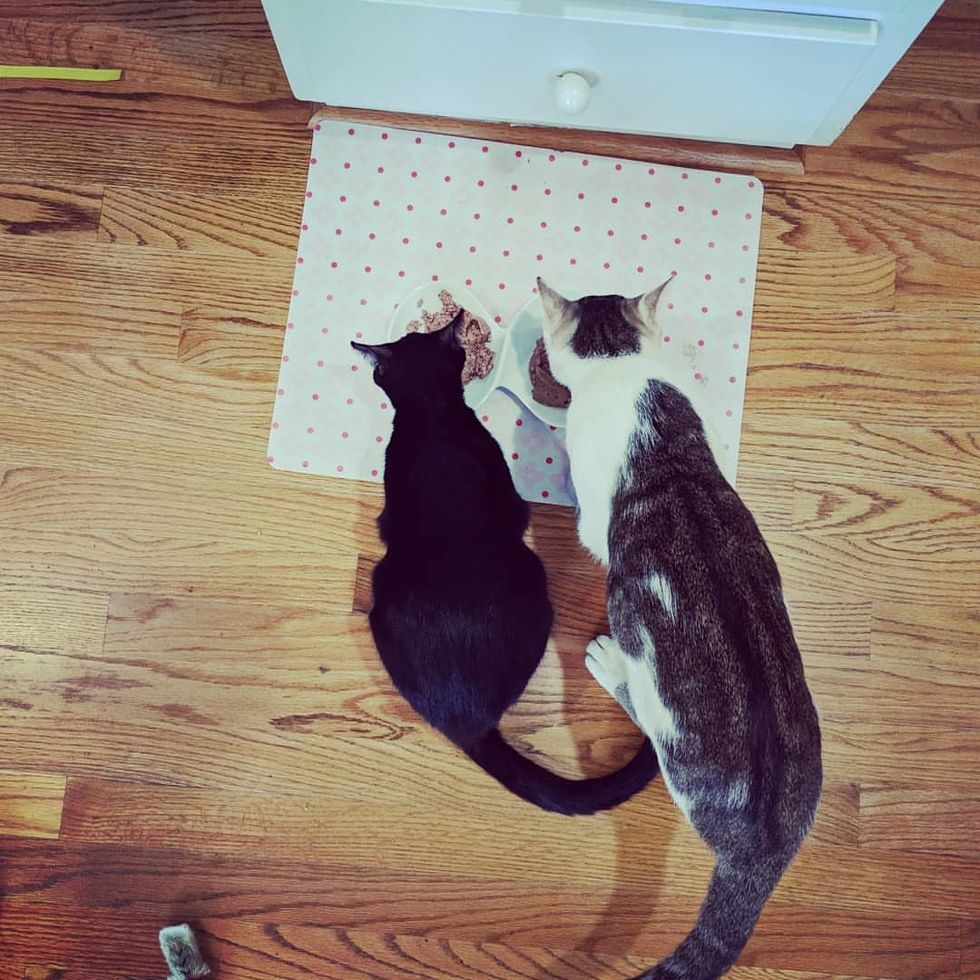 Caroline's belly grew so much over the past few weeks that Robyn began to anticipate the birth of the kittens this week.

As they patiently waited, the two kitties continued to shower each other with love. The day before Valentine's Day, Robyn woke up to meowing coming from the foster room. 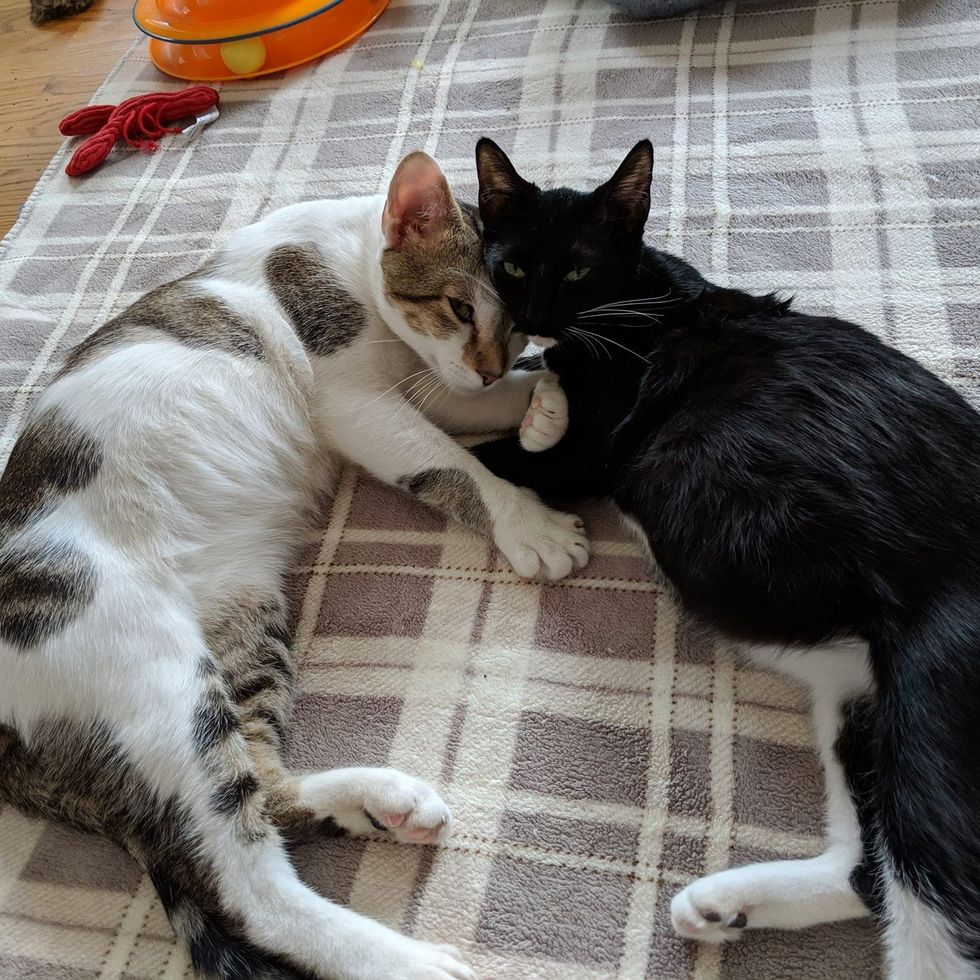 "I woke yesterday morning to the sound of Charles demanding that I open the foster room door and let him out," Robyn said.

She walked to the room with their breakfast and saw the pair waiting for her at the door. After scarfing down a good amount of food, Caroline went into the crate they prepared and started having contractions. 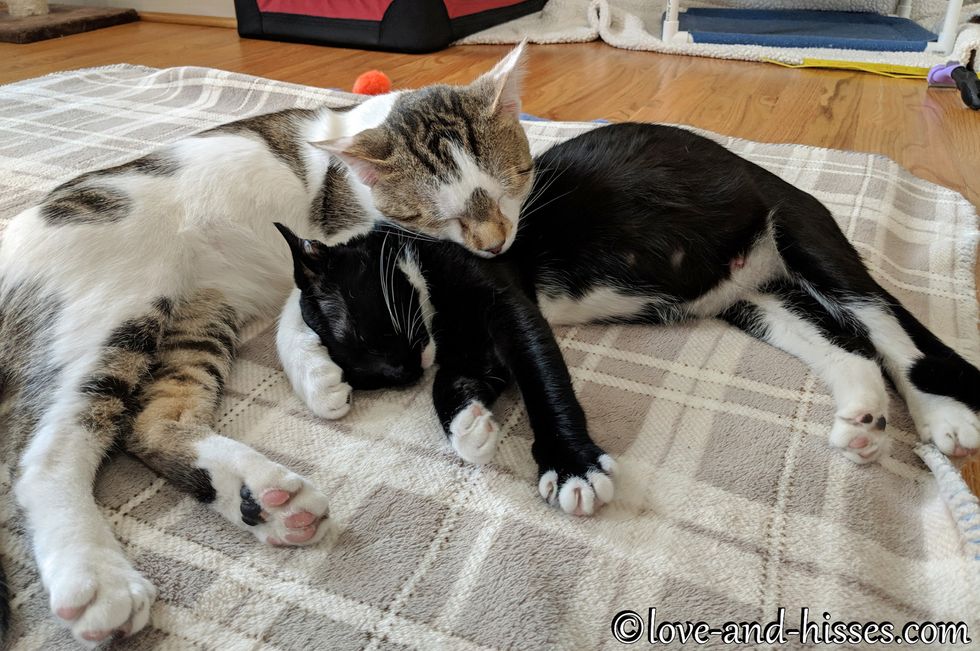 "She was clearly in labor, and so I sat and talked to and petted her for several minutes," Robyn said. "Charles had ventured near the crate while she was having contractions."

Charles stayed right outside and kept sticking his head in to sniff her.

"He licked her on the head a few times and she would rub her head against him. I think she took a lot of comfort in having him nearby." 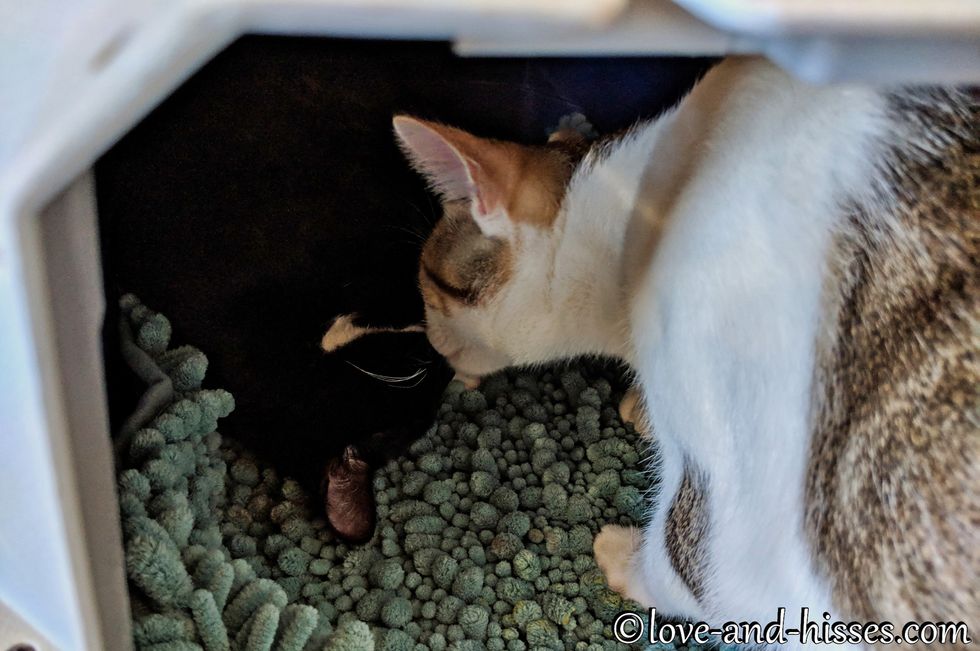 When the kittens were born, Charles heard their cries and immediately came running to check on them.

While mama was in the process of cleaning them up, he stayed nearby, watching her tend to her babies. 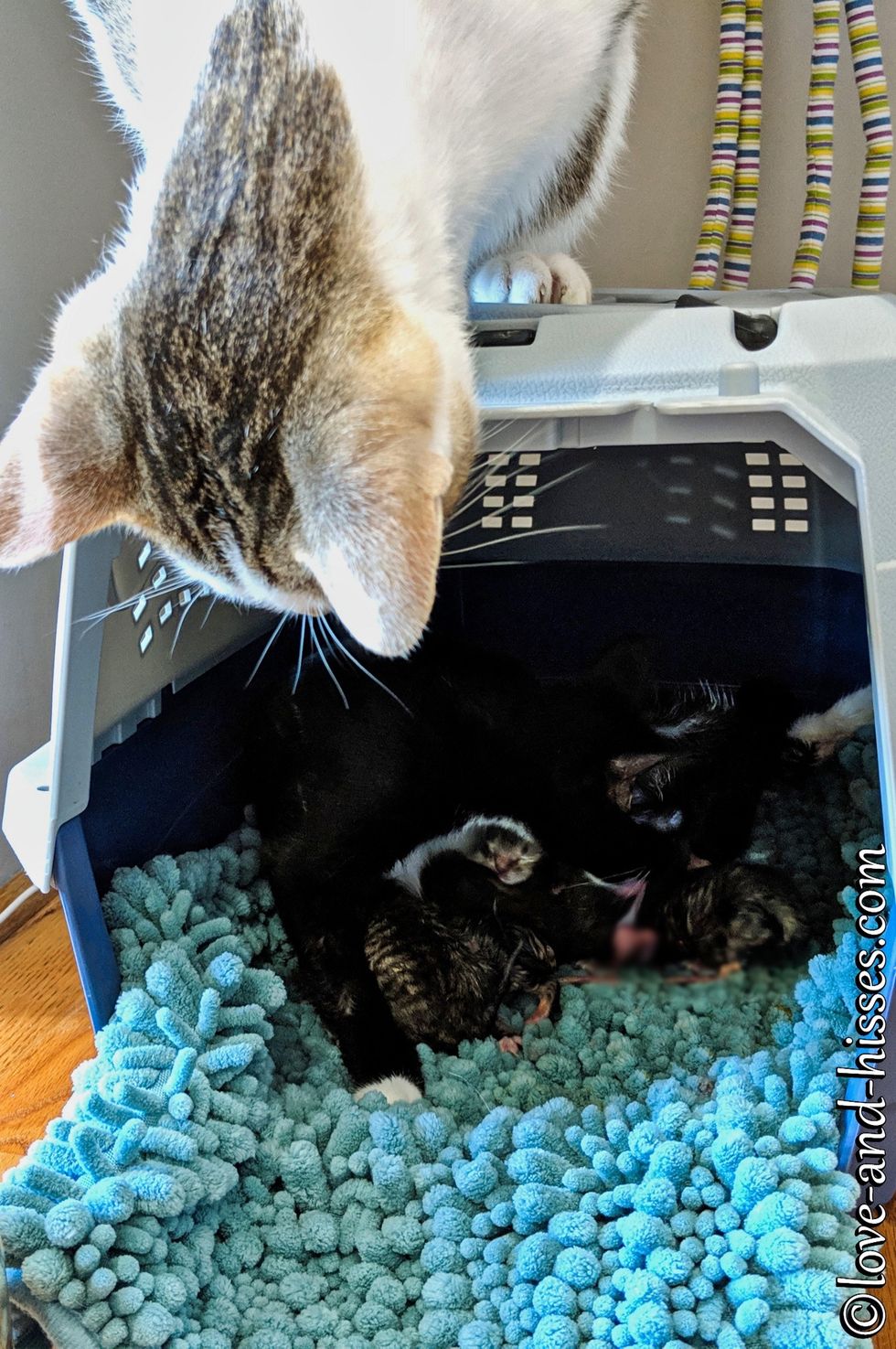 They welcomed five healthy tabbies into the world.

Watch Charles and Caroline in this adorable video:

"Charles has many brown tabby patches, and so I assume that's where the brown tabby-ness came from," Robyn said. 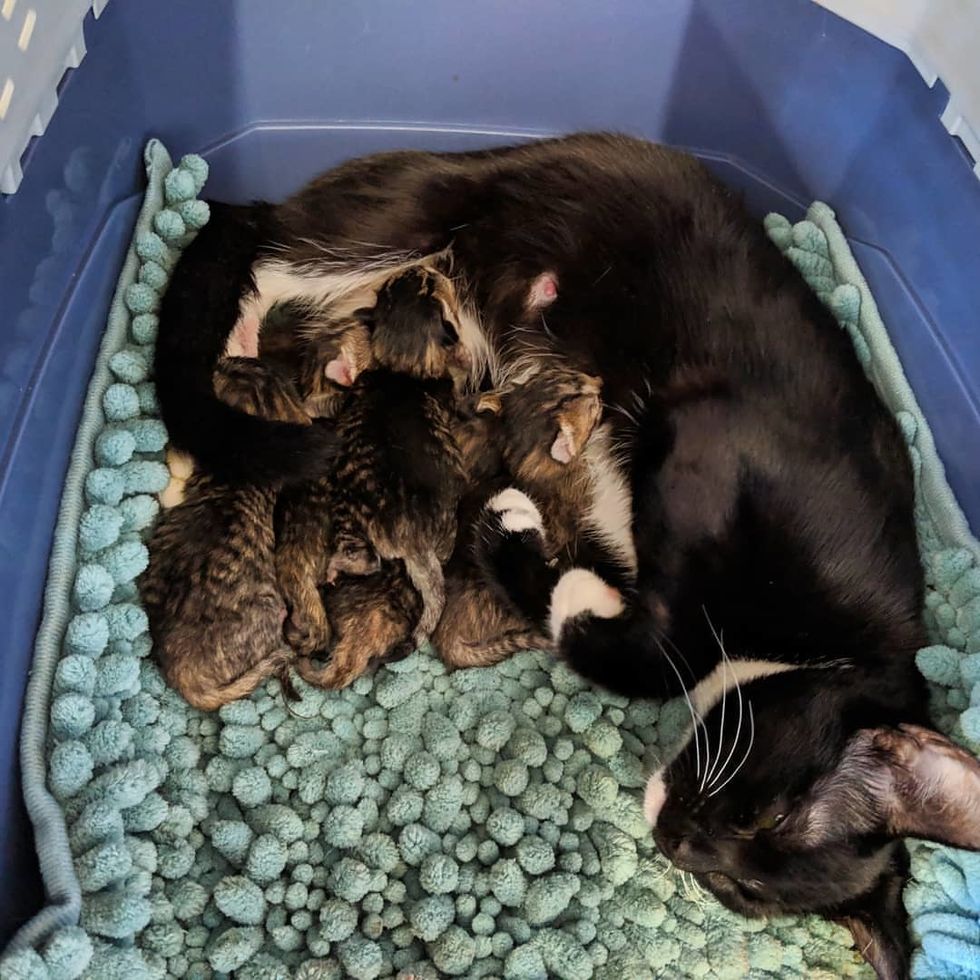 With five kittens, Mama Caroline has her work cut out for her.

She's been doting on them with purrs and unconditional love while keeping them fed and clean around the clock. 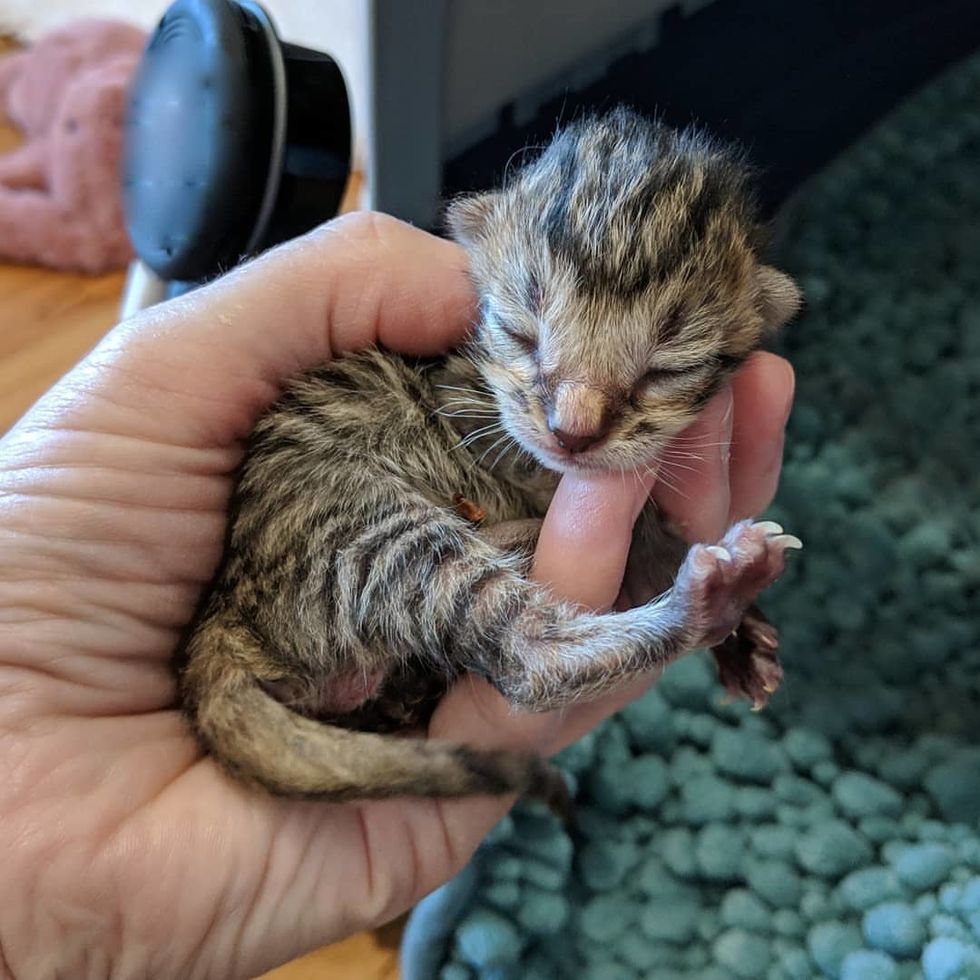 Knowing Caroline has her paws full, Charles is giving her space while making himself available whenever she needs his support.

"He checks on her from time to time especially if the kittens start crying," Robyn told Love Meow. 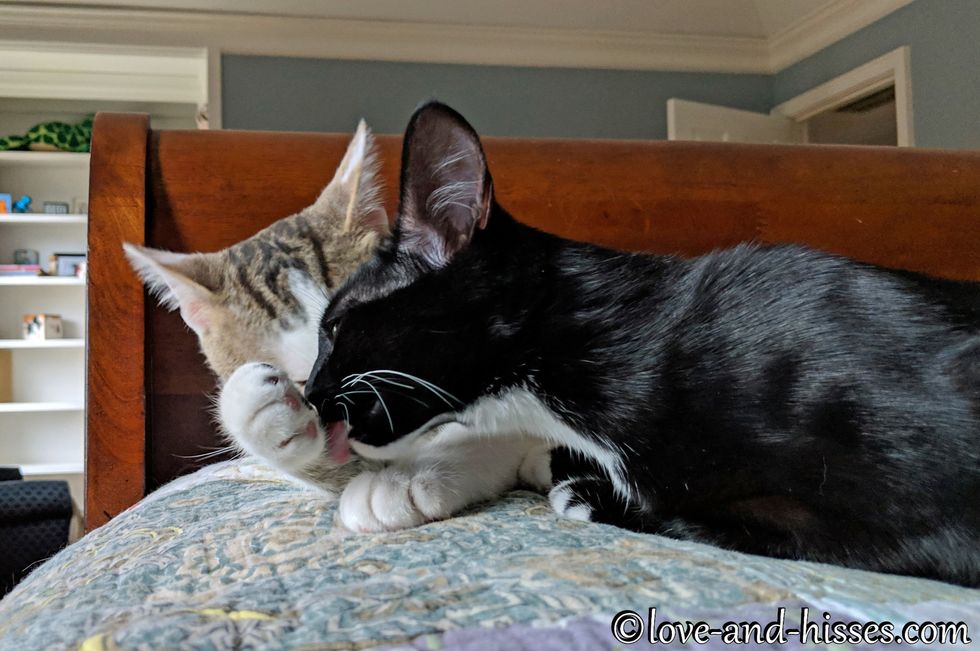