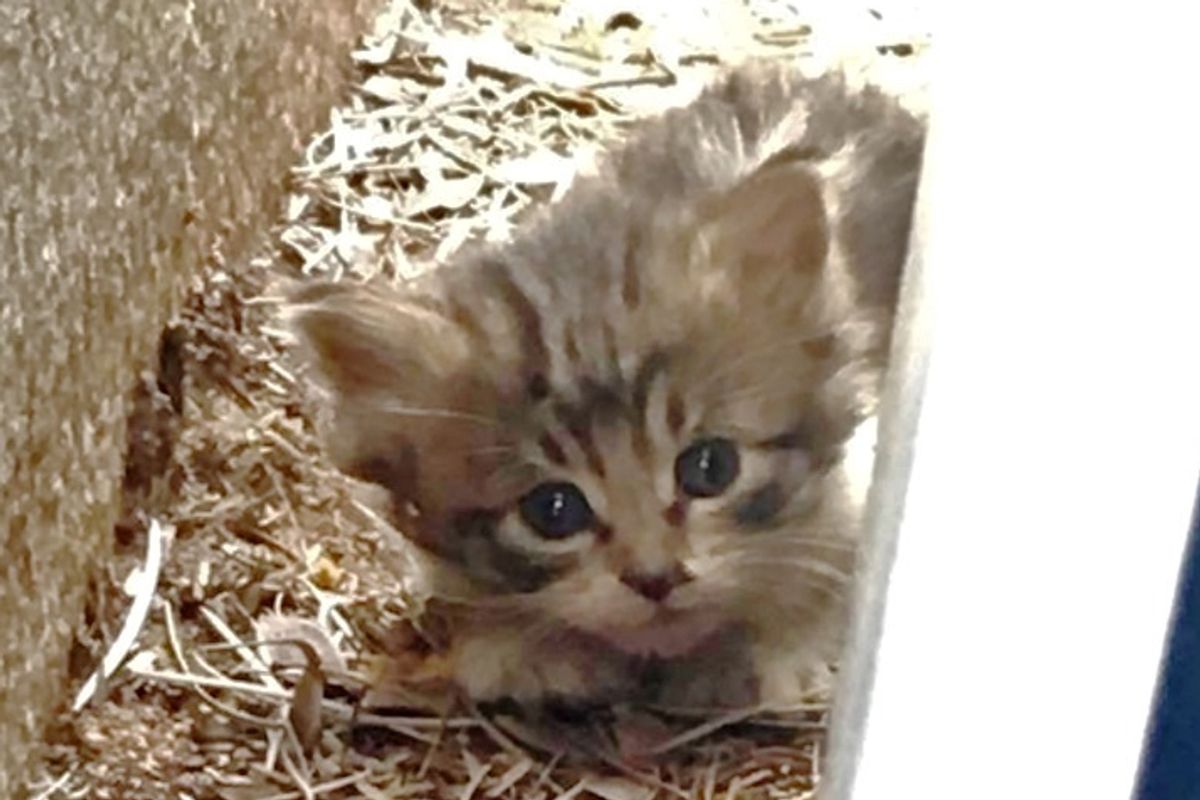 Kitten Ran Around Parking Lot, Trying to Hide Until Woman Found Her and Turned Her Life Around

A year ago, a tiny kitten was spotted running around the parking lot at a facility in Arizona. The kitty was frantically trying to hide from everyone there. 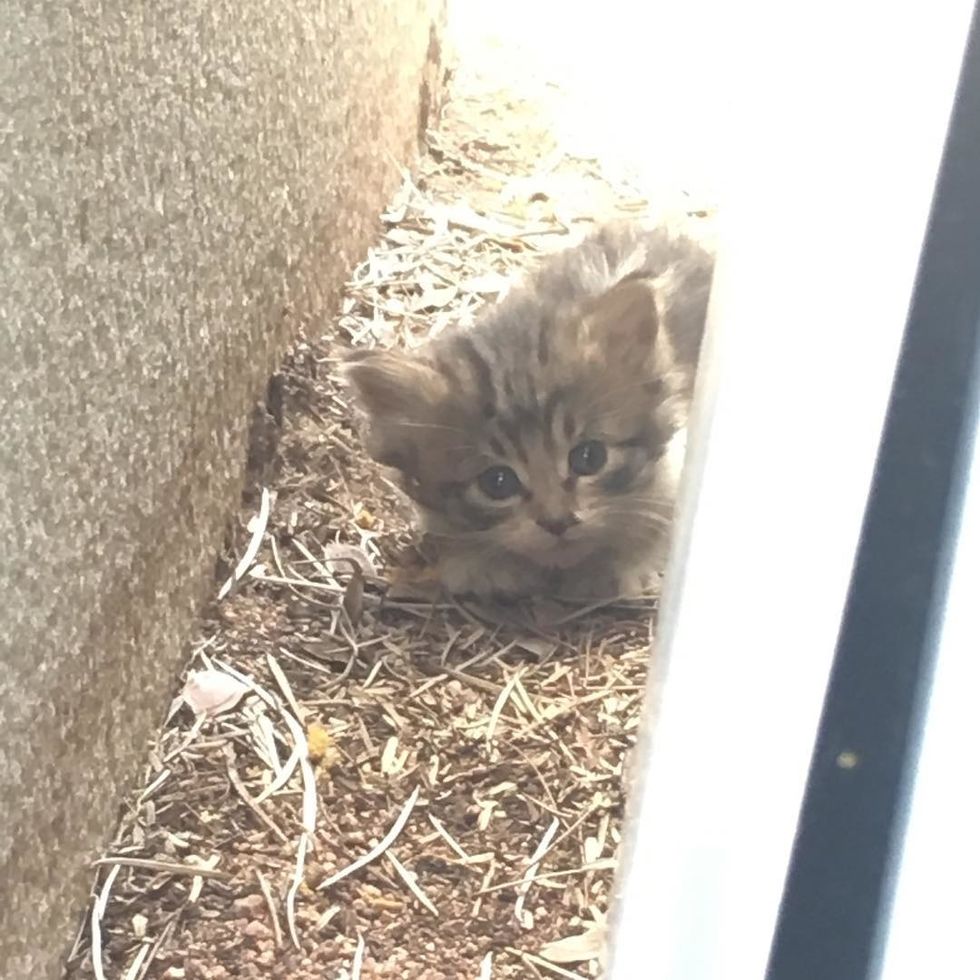 Lisa, an employee, was taking her morning walk outside when she heard something coming from an electrical box.

"I worked in a large facility with lots of building. As soon as I went outside, I heard what I thought was very loud chirping. Then I realized it might be a cat," Lisa told Love Meow.

"As I stood by an electrical box next to a building and meowed at it to see if something would meow back, another employee walked by and asked, 'Are you trying to catch the kitten?'"

It turns out that a security guard had seen a mama cat carry her babies, one by one, early in the morning. They believe that this kitten had gotten lost or left behind. She was running away from everyone that tried to help her. 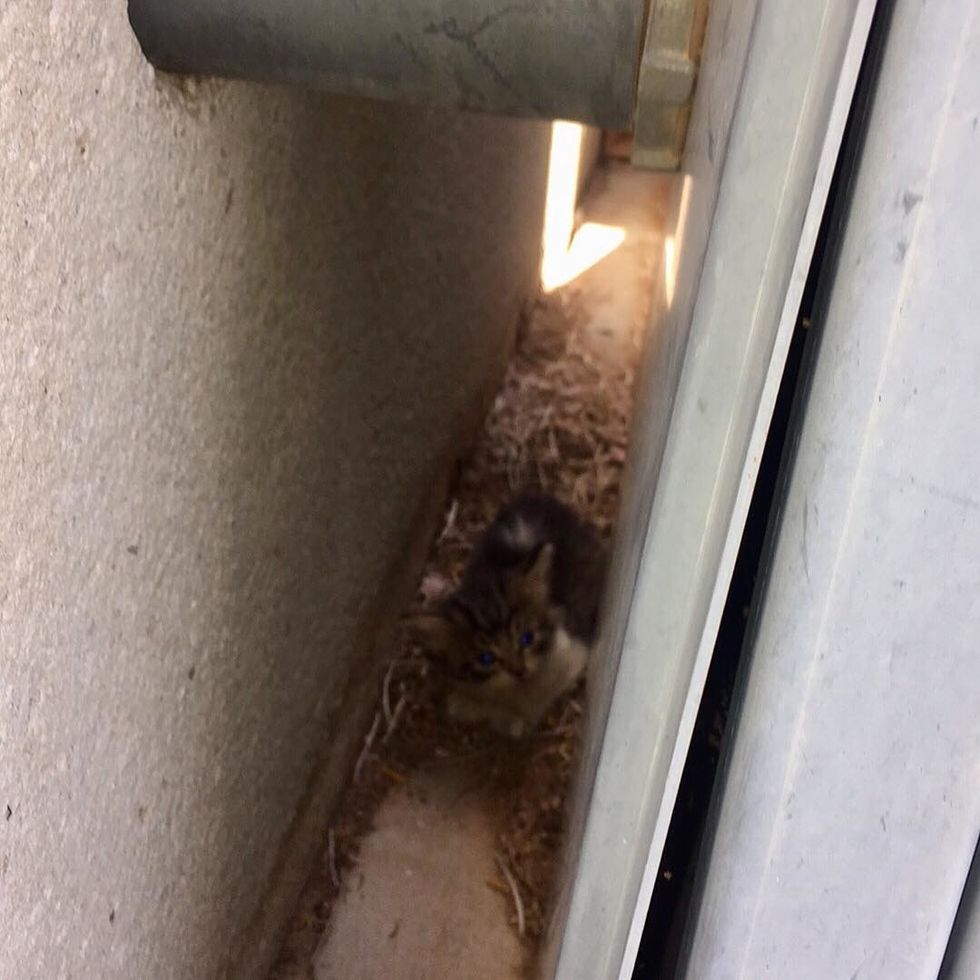 "She was behind the electrical box and stopped making noise as soon as she saw us. She was about four weeks old. It was 100 degrees (37.8 C) and I knew that she couldn't stay there or she would die," Lisa added.

The area had a lot of traffic and was not safe for the kitten. Lisa's co-worker got a large box from inside and blocked off one end of the space. The kitten was frozen in fear and they couldn't reach her, so they used a shipping tube to gently nudge her into the box. 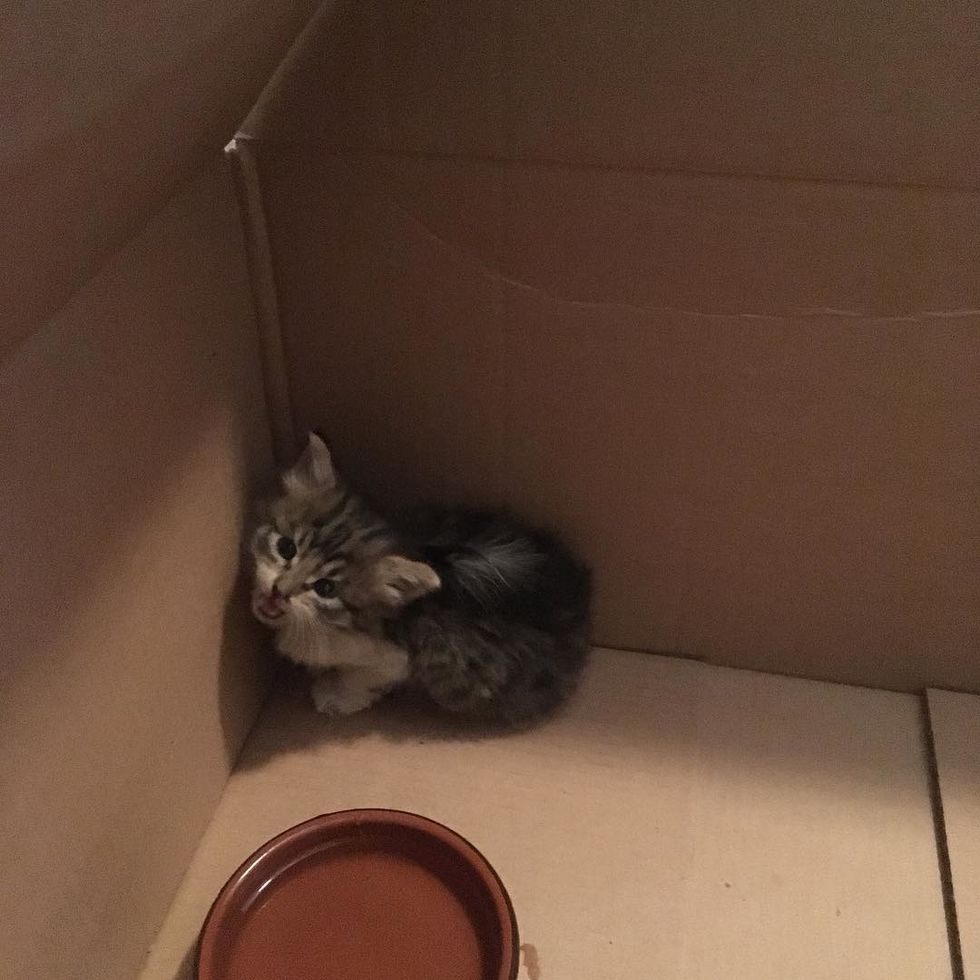 "I went to tell my boss I needed to go home for a while because I had a kitten in a box at the front desk. Being an animal lover herself, she told me to go home and take care of the kitten," Lisa said.

The little tabby was very scared when they got home. She hissed at her rescuer and her whole body was shaking. Lisa stayed by her side and tried to calm her.

Soon the hissing stopped, and then the purring began. 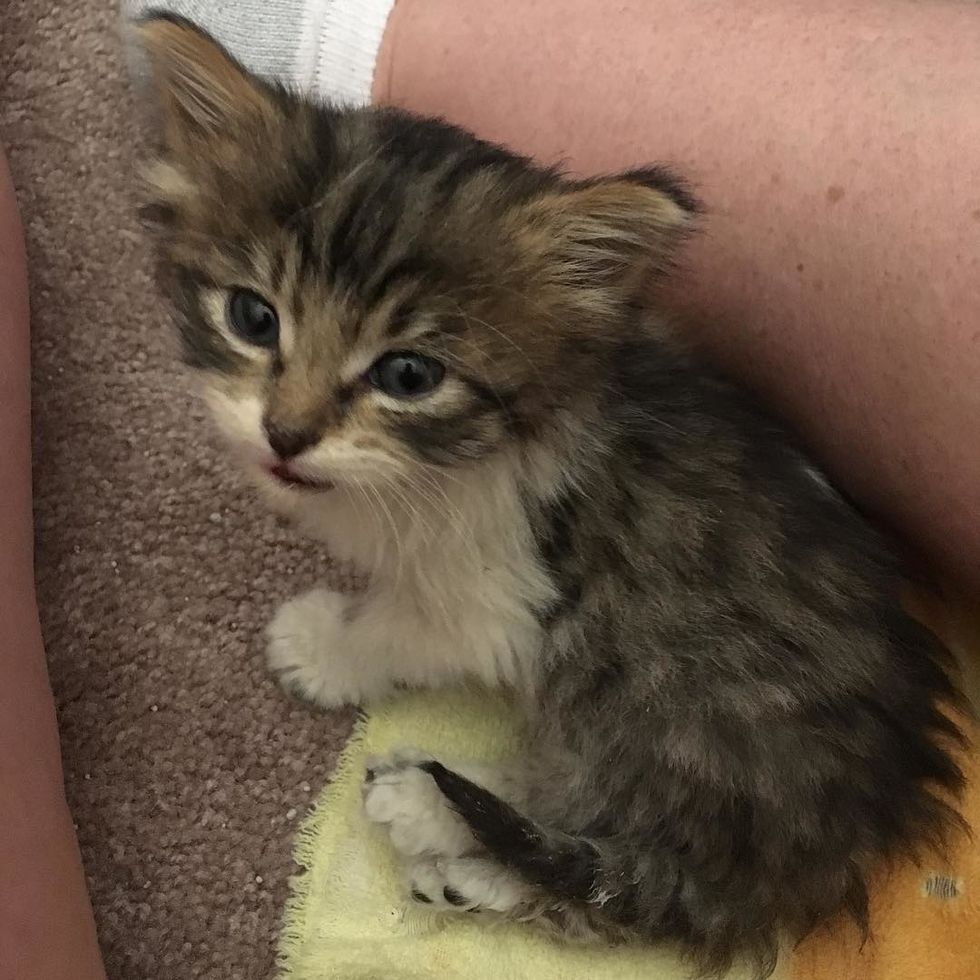 Lisa brought out a can of cat food, and the kitten came running to the sound of it opening.

She was hungry and couldn't resist the offer. 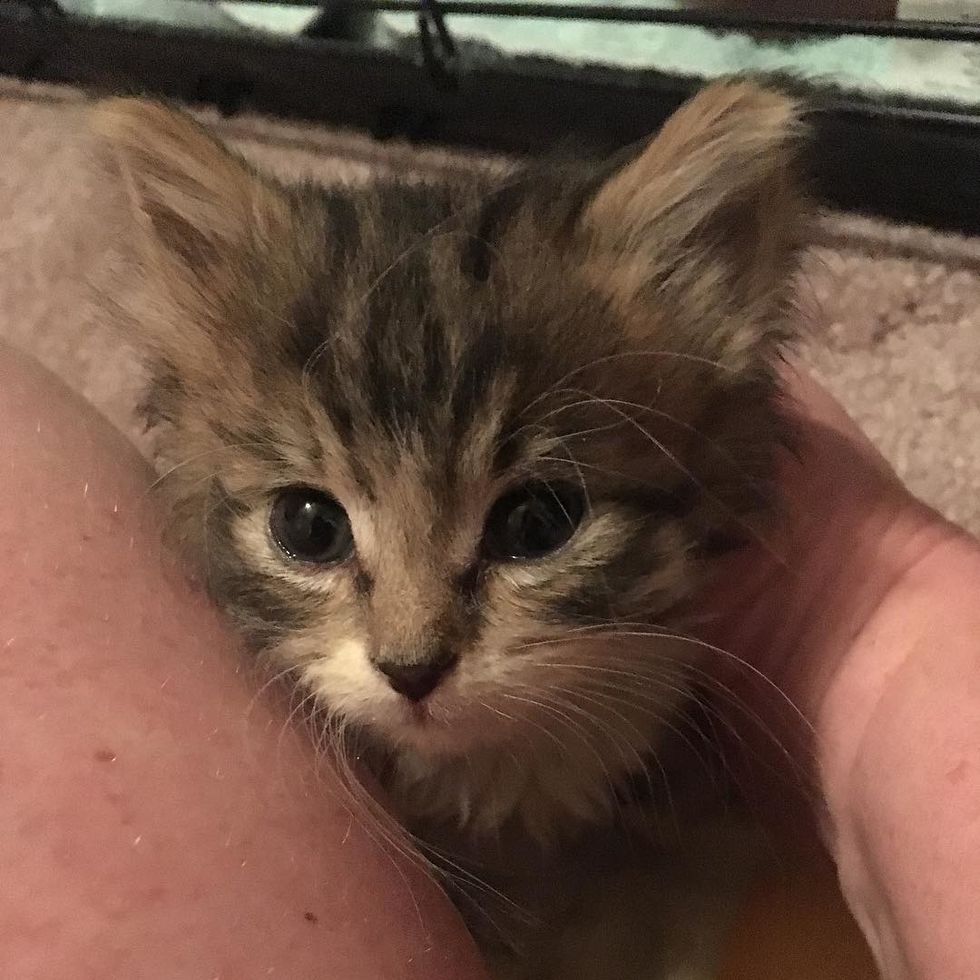 They already had two cats, Calamity and Catastrophe, and were not sure if they were ready for another one. "But once my husband held her that night, there was no doubt that we had a new kitty."

The little bundle snuggled up to her new dad and wouldn't let go. 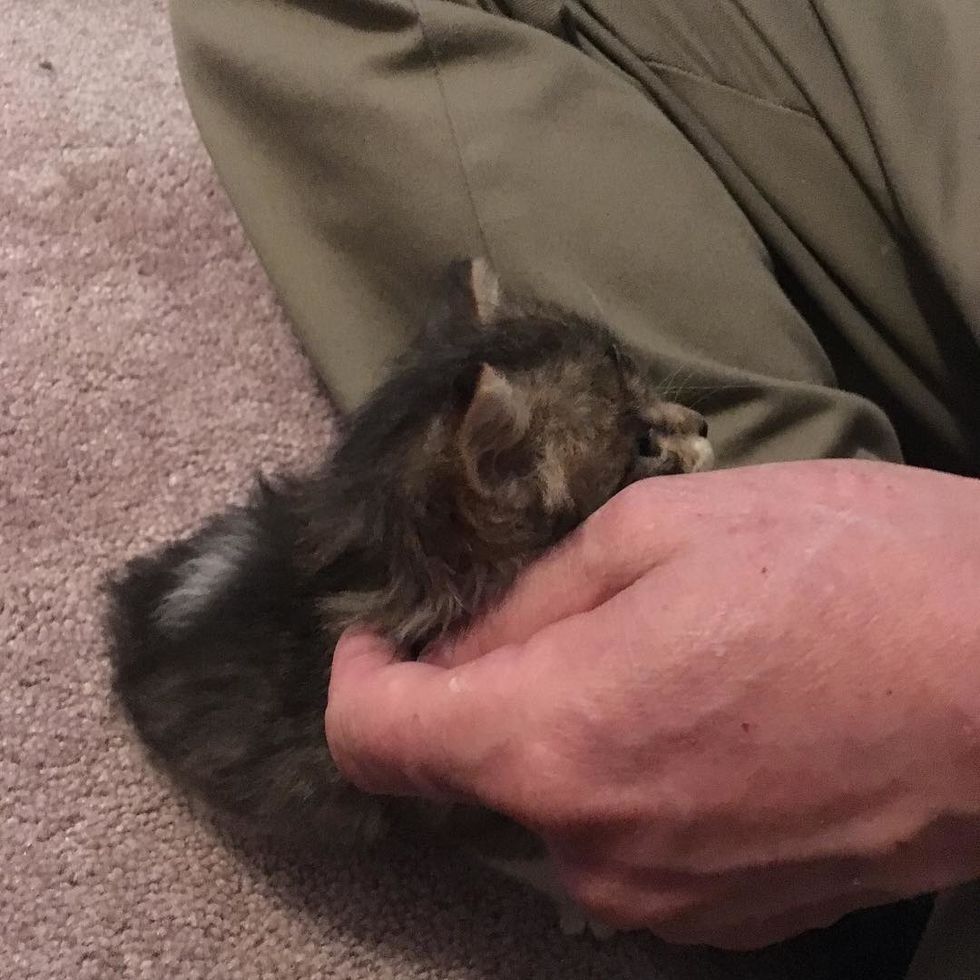 They named her Mayday!

"We have a destructive naming theme with our cats, so we picked Mayday for a girl. It was perfect because she was calling out in distress when I found her, and she was born close to May 1st." 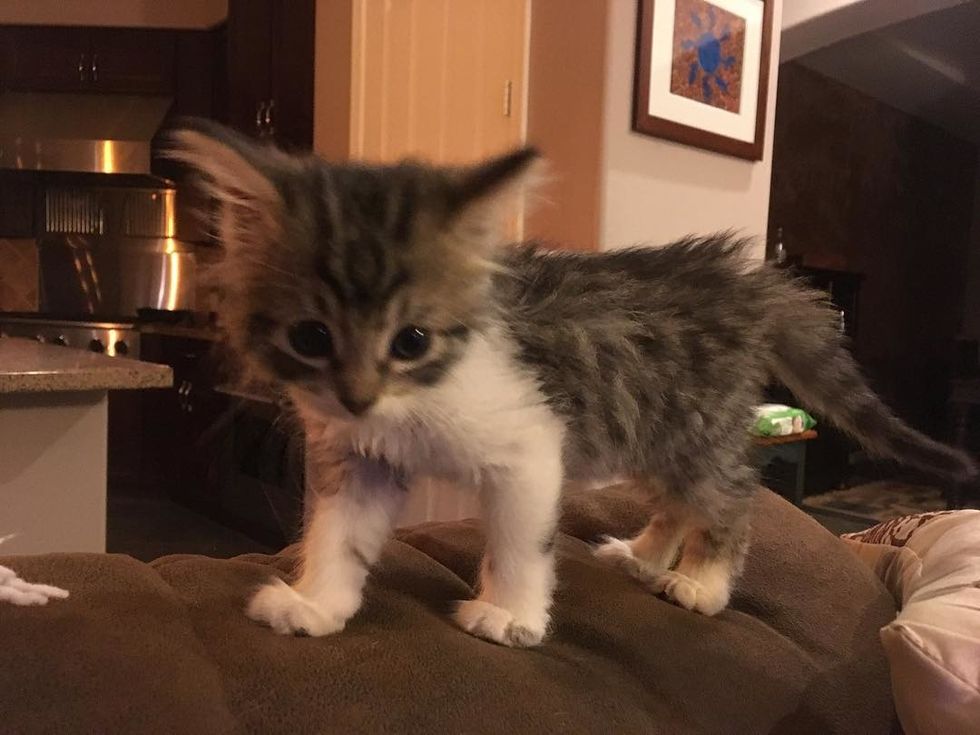 They continued looking for the mama cat and the other kittens but no one saw them again at work.

Little Mayday found a feline sister when she met Catastrophe who is a year older. The tuxedo cat immediately took the kitten under her wing. 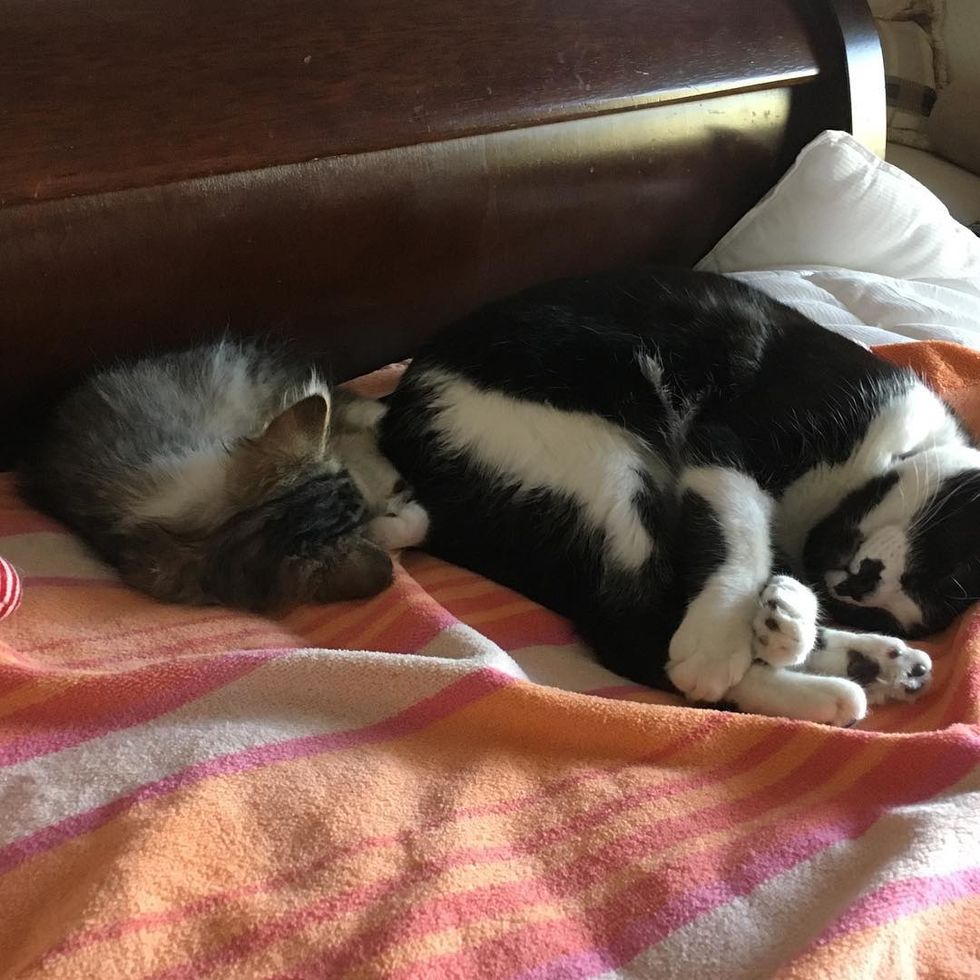 "They are best buddies for grooming, napping and playing. Mayday also won over Calamity, who is seven."

A week ago, sweet Mayday turned one. She's blossomed into a beautiful cat with a long, fluffy tail to be marveled. 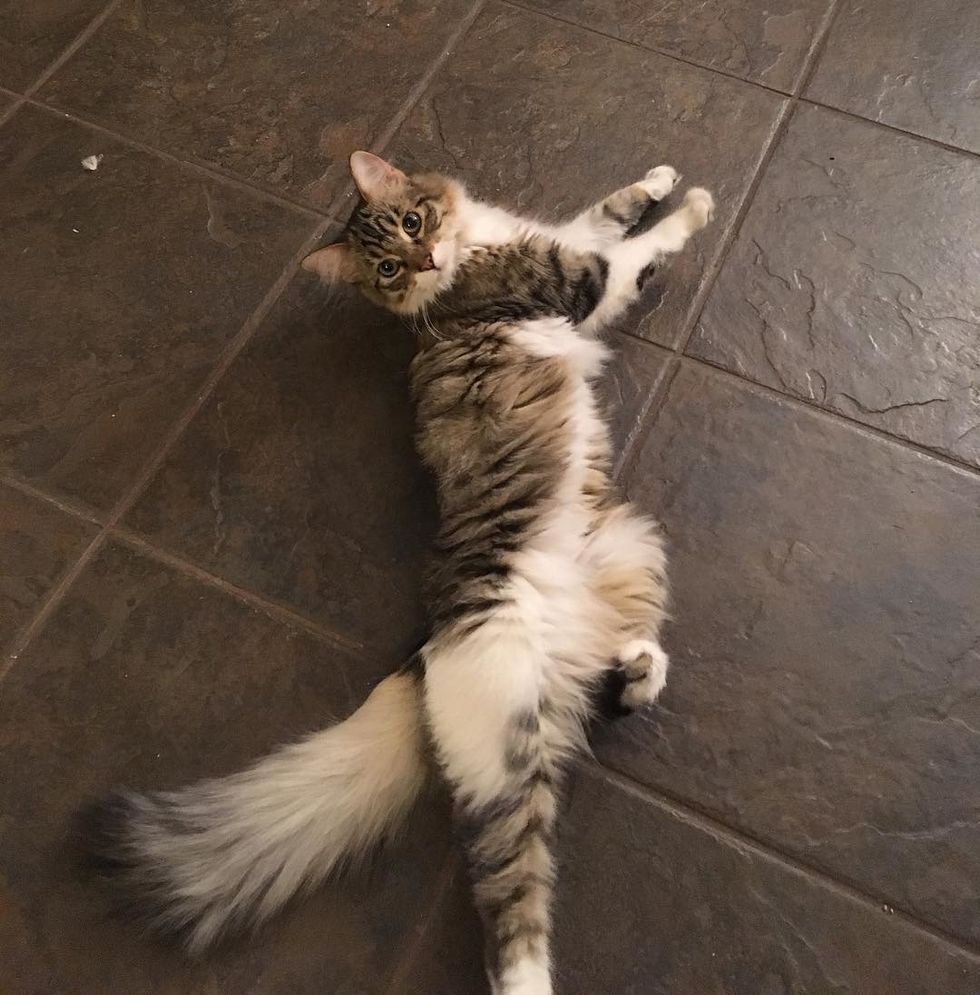 "She is the sweetest cat we've ever had. She's gentle and loves to purr and play," Lisa said.

A year after the rescue... look at her now! 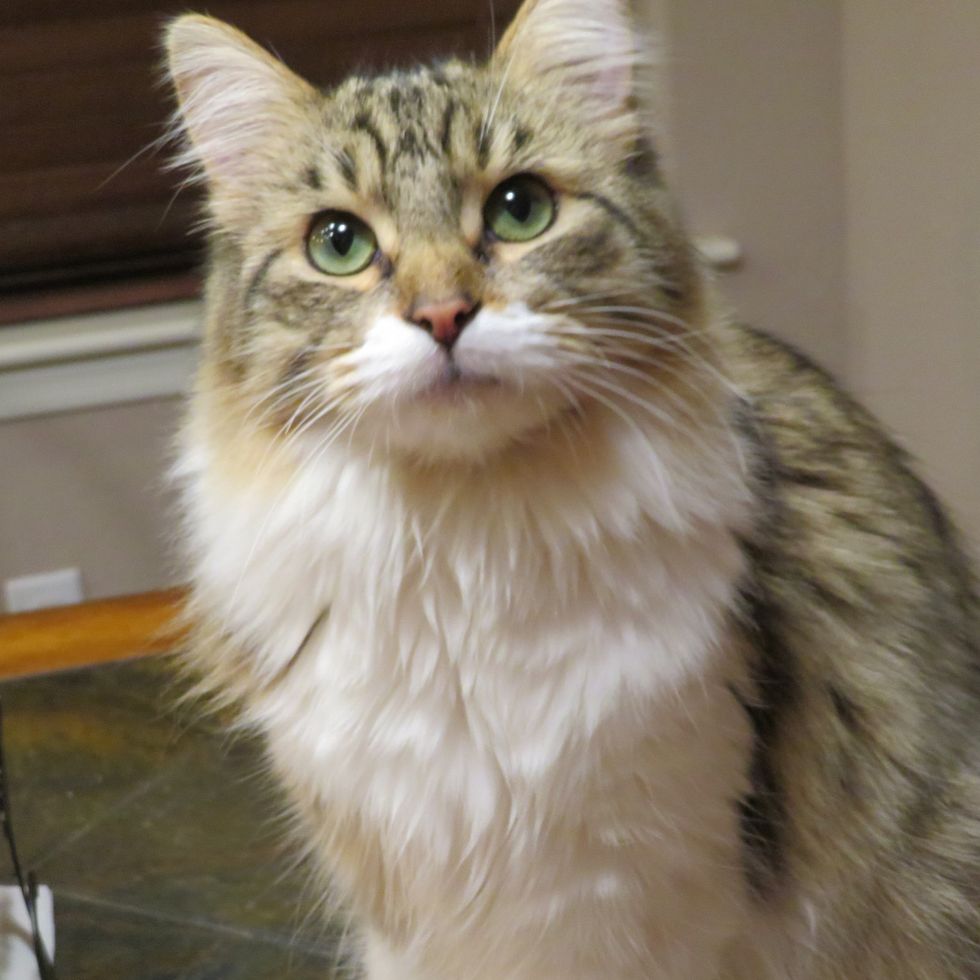 Watch Mayday's journey in this video: