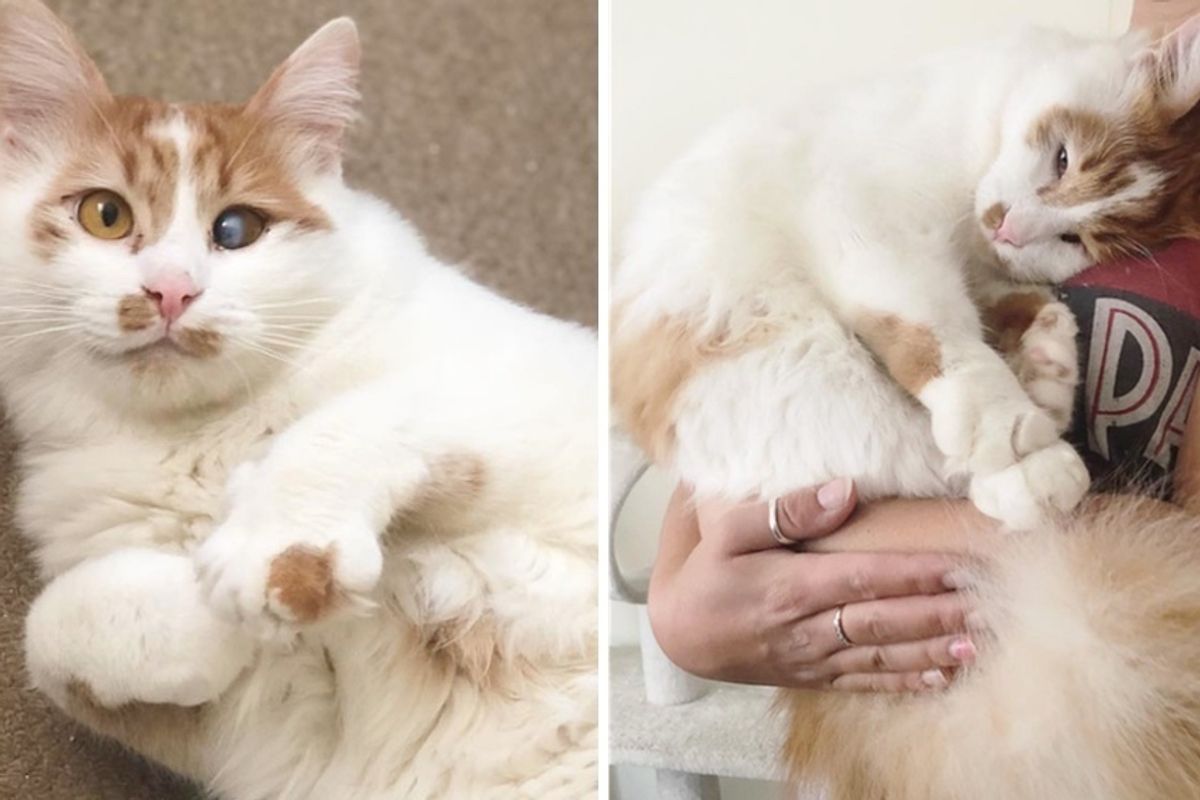 Honey is a special needs cat who grew up at the shelter because he couldn't find a home.

He is blind in one eye but has so much to give.

A few months ago, Kyla from England came across a rescue group from Egypt that specializes in saving and helping special needs kittens and cats. She reached out to Alexandria Cat Rescue Centre, in hopes of giving a kitty a forever home. They had three cats that were available at the time, and Honey, the half-blind cat, had been there the longest.

She knew right away that he was the one. "It had to be him. He'd been in the rescue for almost a year and no one wanted him," Kyla told Love Meow.

Honey was found in poor shape as a kitten with a wounded eye. It was either due to glaucoma or trauma by other street cats while he was living as a stray.

He grew up at the shelter as no one showed interest in adopting him until Kyla came along a year later. "We flew him over from Egypt to England. The day we got him, we were driving back home and he was so vocal for the whole ride," Kyla said.

When they got home, Honey walked right out of his carrier and was so intrigued by everything around him. He immediately took a liking to his human parents. "He was already giving us kisses when he came out of his carrier."

After a few days of getting used to the new scents, he came from under the couch and decided to claim the house as his Kingdom.

"He instantly became the most confident cat I've ever had," Kyla said.

Honey's blind eye has healed. Though he doesn't have any vision in it, it gives him quite the unique look. Sometimes he bumps into things if he turns around too fast, but nothing can stop him from having fun.

From day one, Honey showed his family what a love-bug he truly is. "He's the most affectionate cat I've ever had."

"He has to have morning cuddles before I go to work, and he has to have evening and night cuddles or he won't go to sleep," Kyla told Love Meow.

"Honey aggressively shoves his head into your hand so you'll stroke him, and tends to gently nip when you ignore his generous offer of petting him."

Honey enjoys his title as the house supervisor. He goes to the kitchen first thing in the morning after waking up his humans.

Despite being blind in one eye, Honey can do anything just like other cats.

Honey tries to convince his Mom that she should stay home and cuddle.

It's been over seven months since Honey found his forever family. He follows them around the house, offering cuddles and companionship.

Kyla couldn't believe that no one had offered him a home, but she is so happy that they did.

The sweet boy has blossomed into a beautiful cat with the most gorgeous eyes.

Honey had his dreams come true.

Now every day he tells his humans how happy he is through cuddles and purrs.