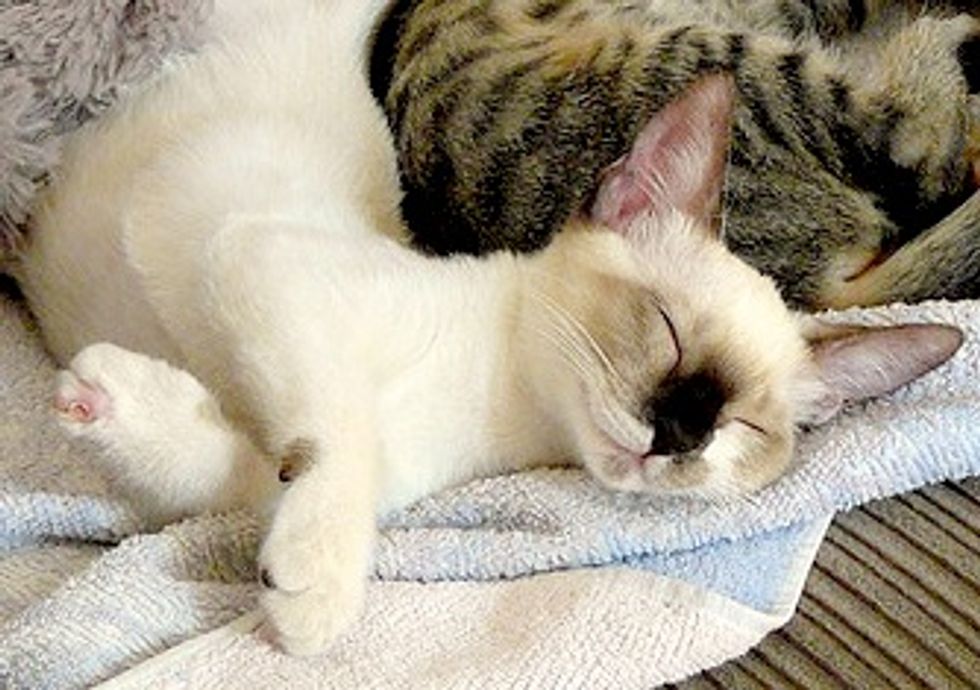 Kitzy was brought to Andreea on June 13, 2009. She was missing a chunk of her paw. "Three little girls brought her at the end of an adoption fair. I grabbed her, wrapped her in a towel and rushed her home to feed her and give her first aid. Early next morning I took her to the vet."

There was nothing the vet could do for her at that time except some antibiotic ointment on the wound. Andreea named her Mishu because the vet thought it was a boy kitten around three weeks old. Until later it was clear that she was a female so they changed her name to Kitzy. "She is a fighter, she wants to live and I will help her do just that. She eats well, sleeps well, is active when awake, and purrs when I hold her. To my surprise, she used her injured paw when walking or holding the milk bottle."

When Kitzy came, Andreea's kitty Pitsi was a bit confused. She couldn't make sense of the new tiny screaming creature that appeared out of the blue in her house.

Andreea worked around the clock to nurse the little baby even if she had to get up in the middle of the night. "After every meal. She did a little bit of cleaning, then 15 or so minutes of lazy playing, soft massage and belly rubbing, and some purring too. Then we went back to sleep for 3 to 4 more hours."

"Two weeks since rescue, the little one was doing great, and the paw was healing steadily. She weighed about 360g as compared to 220g when I found her!"

"The very first time I let her walk on the floor in my room as soon as her paw healed, she went straight to Pitsi's food bowl and did what you see... her very first contact with kibble, at 6 weeks."

Kitzy was officially adopted at Andreea's shelter's weekly adoption fair on August 22 by Andreea herself. It was a wonderful day that both of them cherished. "She is a very special kitty who needs and deserves more than just a bowl of food, a warm place and the average affection. I for sure am able to understand and appreciate her Cattitude.