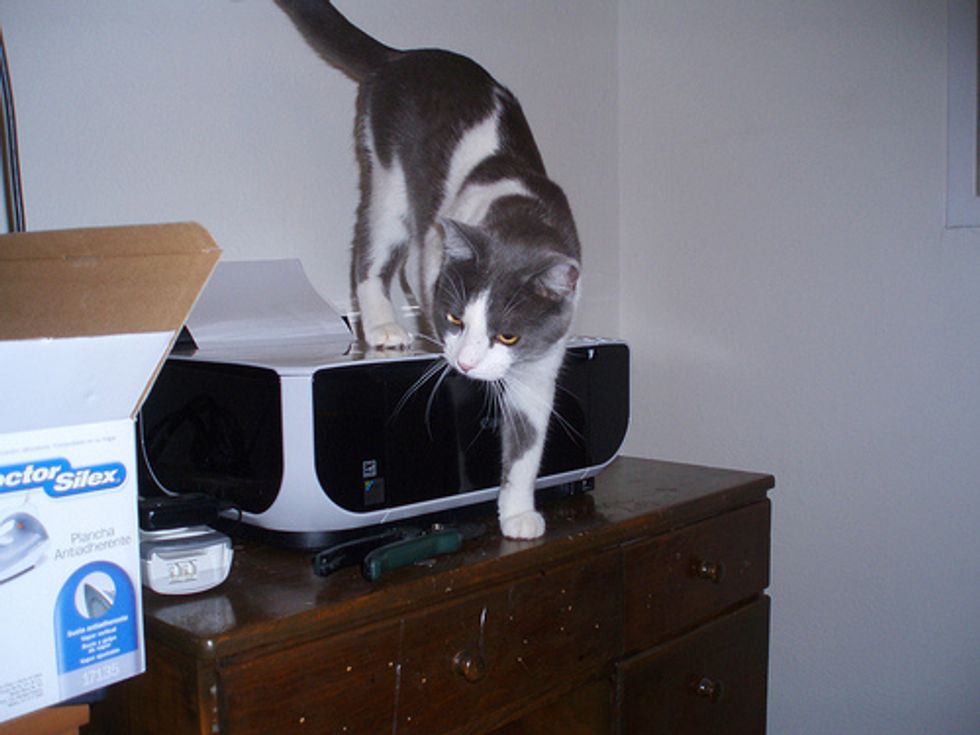 My cats are very curious cats ( like most cats ). But when you try to put a CD in the PC and it starts to spin they totally start to become boxing kitties. Also when you try to print out things, they are almost in the printer with there heads. Now I tried to find some information on Internet why cats have such an obsession with CD players and printer, but I couldn't find anything. Only some movies of cats with the same thing. So apparently these things triggers something at the cats. I was wondering if you maybe knew some more about this behaviour?

Indeed many cats get in a combat mode when a CD player starts spinning or a printer printing. What you see from your kitties is a display of aggression.

What happen in either of these scenarios is that the sound produced by the machines appears to be extremely unpleasant to your cats. If you turn on the printer in close proximity to the cats, they'd feel instantly threatened or bothered by the sound. As you know cats communicate through mostly scent, but often via sound as well. When a cat hisses, you know that kitty is not happy. Similarly, when the printer produces the printing sound, your cats may interpret it as some type of defensive mechanism coming from the printer as if the printer is warning to attack.

Cats are very curious when they hear or smell something different from their normal routine. When they hear something out of the ordinary, they'd have to find out what it is. Their sense of hearing is much sharper than humans. Cats can hear up to 100,000 hertz as oppose to a paltry 20,000 hertz of humans [5 Senses: Cats vs. Humans] Even though my cats absolutely despise the vacuum, when it is switched off, they try to tiptoe to it, sniff and prod, attempting to figure out its scent and status if not DNA. You may see their tail lowered and fluffed out when they are inspecting the machines. That's a sign of active fear. However, if they are ready to attack, their tail will swish violently from side to side.

Cats often show several types of emotions: aggression, fear and submission. Some cats experience fear when they hear sound coming from a running vacuum, printer, CD player, etc. Others become aggressive, swap and bat, trying to defend for their lives. Cats are very particular to sound. They prefer a quiet and tranquil ambiance. In the context of music, cats can fall asleep listening to harp or piano music because of its soothing and calming melodies. On the other hand, vacuums, printers or computer CD players produce "noise" that puts them under stress. [Is My Cat Unhappy? How to Tell if My Cat is Stressed?]