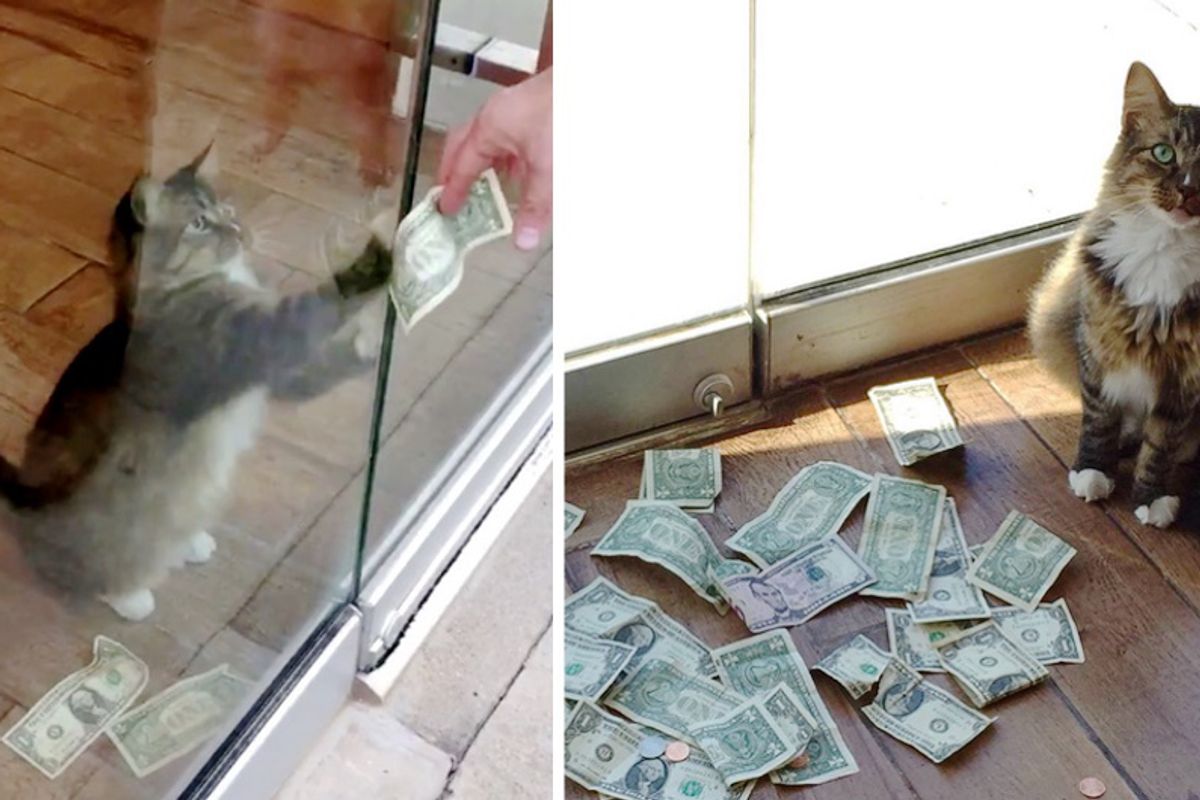 This office kitty has a very special talent. He is a money snatcher. Other cats like catnip, but he has a strong penchant for cash. He takes money from passersby and turns it into something meaningful. 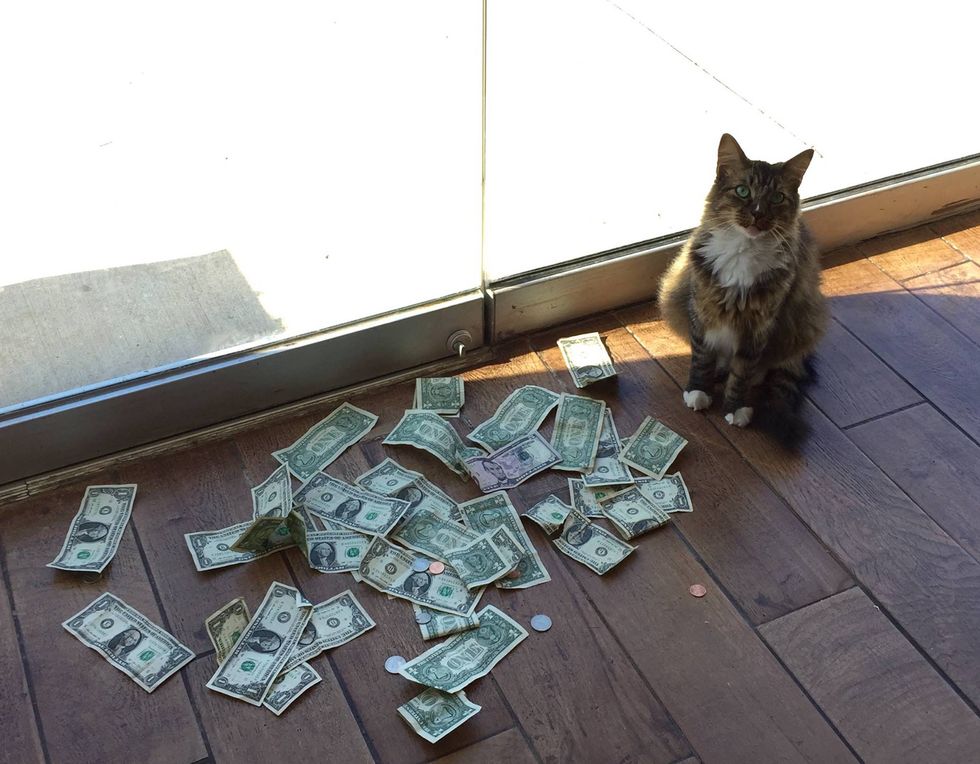 CASHnip Kitty is a proud office cat at GuRuStu, a marketing firm in Tulsa, Oklahoma. He may look like a typical office kitty, but the clever feline has a quite knack which took his humans by surprise.

The company adopted CASHnip Kitty from the Tulsa Animal Shelter when he was about six months old. "They said they found him out running around in an open field. He was homeless before coming to live with us," Stuart McDaniel, owner of GuRuStu, told Love Meow.

The charismatic tabby quickly solved the company's pest problem and has kept all the mice and critters at bay since. He is a permanent part of the team and an excellent supurrvisor. 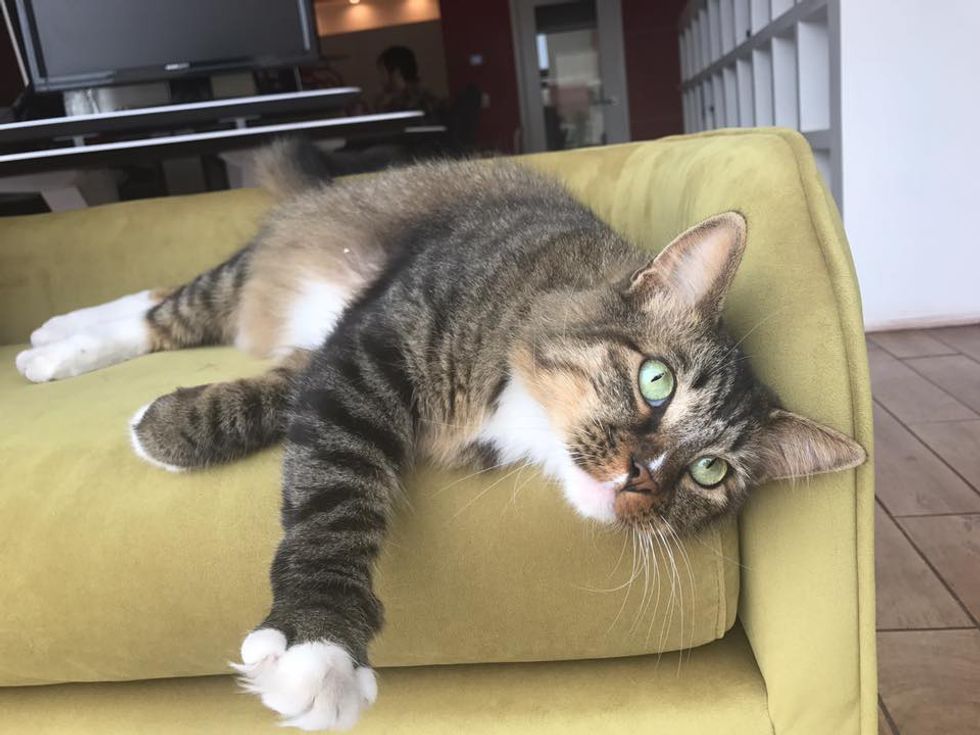 "He hangs out with everyone at the office and often walks on our keyboards and even sends a few emails before we're ready for them to be sent."

About a month ago, Stuart and his team discovered a few random dollar bills lying near the door. The money just kept coming in and they were baffled as in where the cash came from. 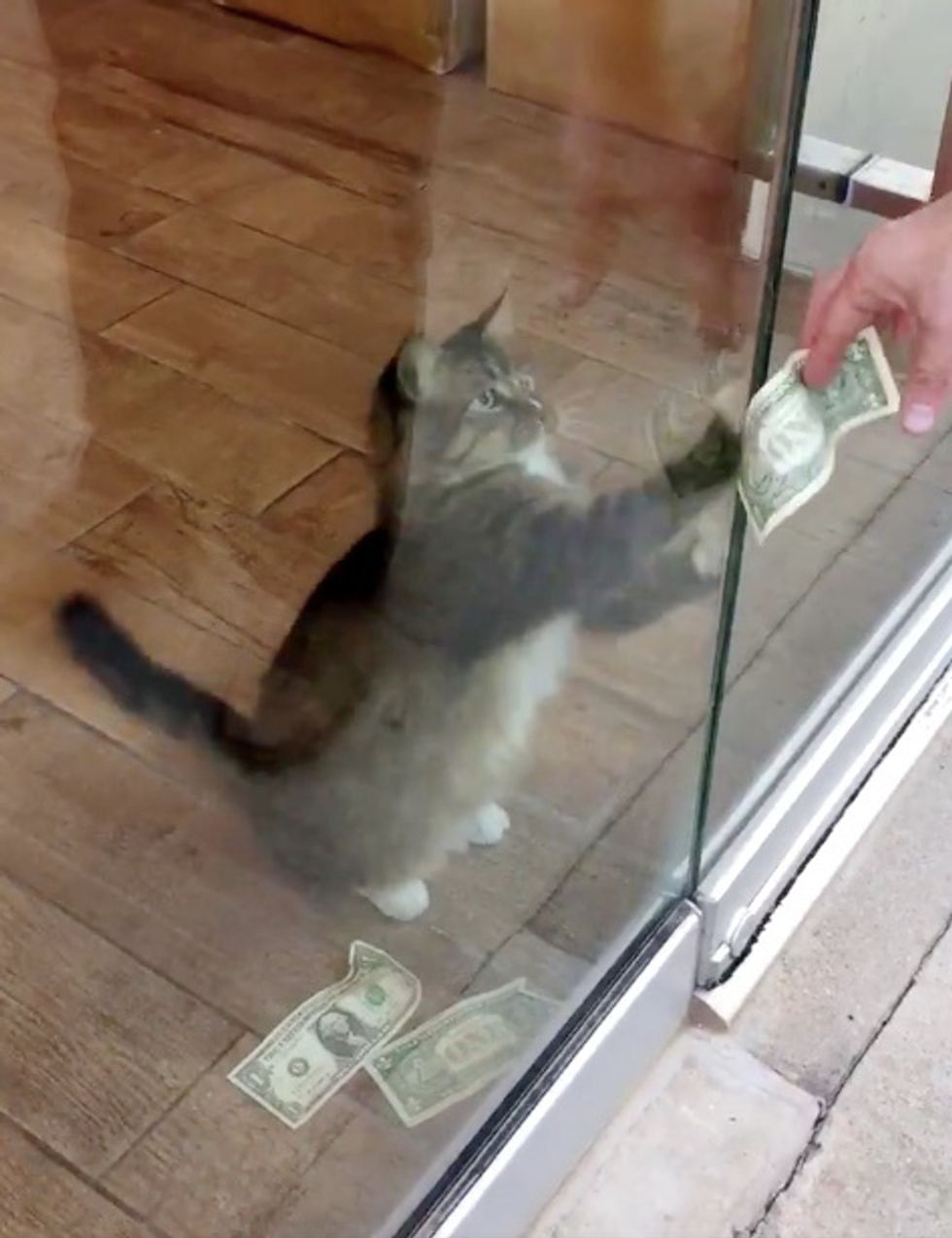 "Our buildings are located in one of the entertainment districts in downtown Tulsa and a lot of foot traffic goes by our door," Stuart told Love Meow.

It was very strange and no one could figure out why the money was there until they decided to test a theory. "We figured people must have been using dollars to play with the kitty through the door and he snatched their money." 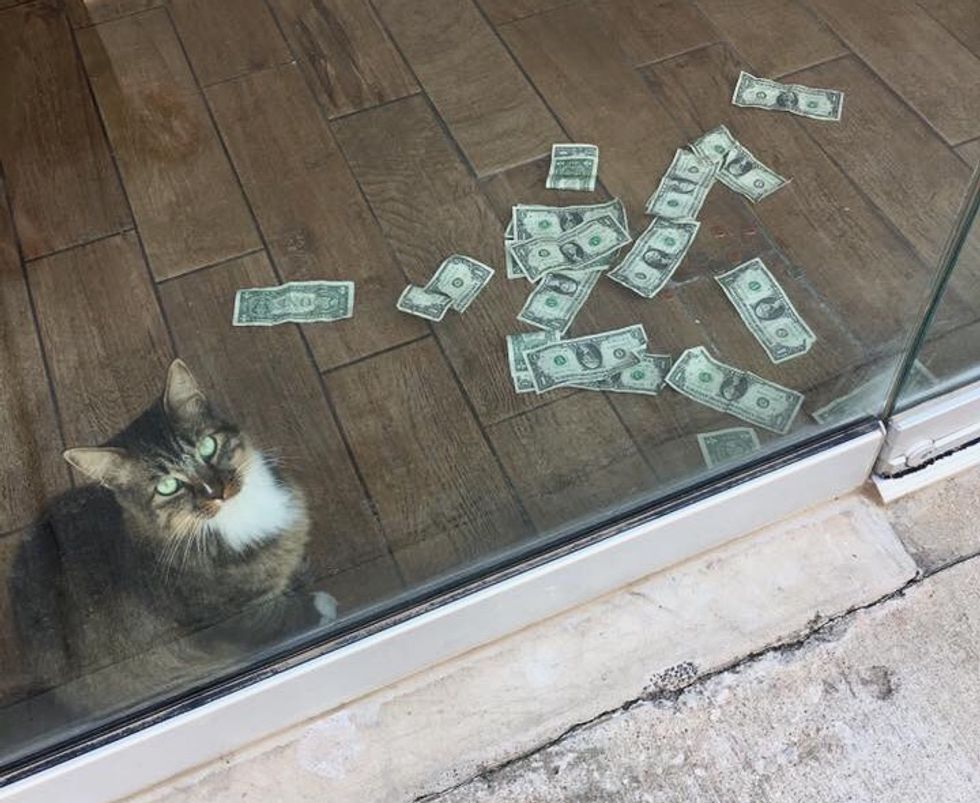 To test the theory, they did an experiment where they inserted a dollar through the door slot. Lo and behold, the kitty snatched it right away as if he'd been doing it all his life.

"We tried it again and over and over, he would jumped up and grabbed the dollar through the door slot," Stuart told Love Meow.

Watch him in action:

"Now we knew no one was paying their invoice in singles."

The secret was out, and the team decided to put the kitty's talents to use for a good cause. 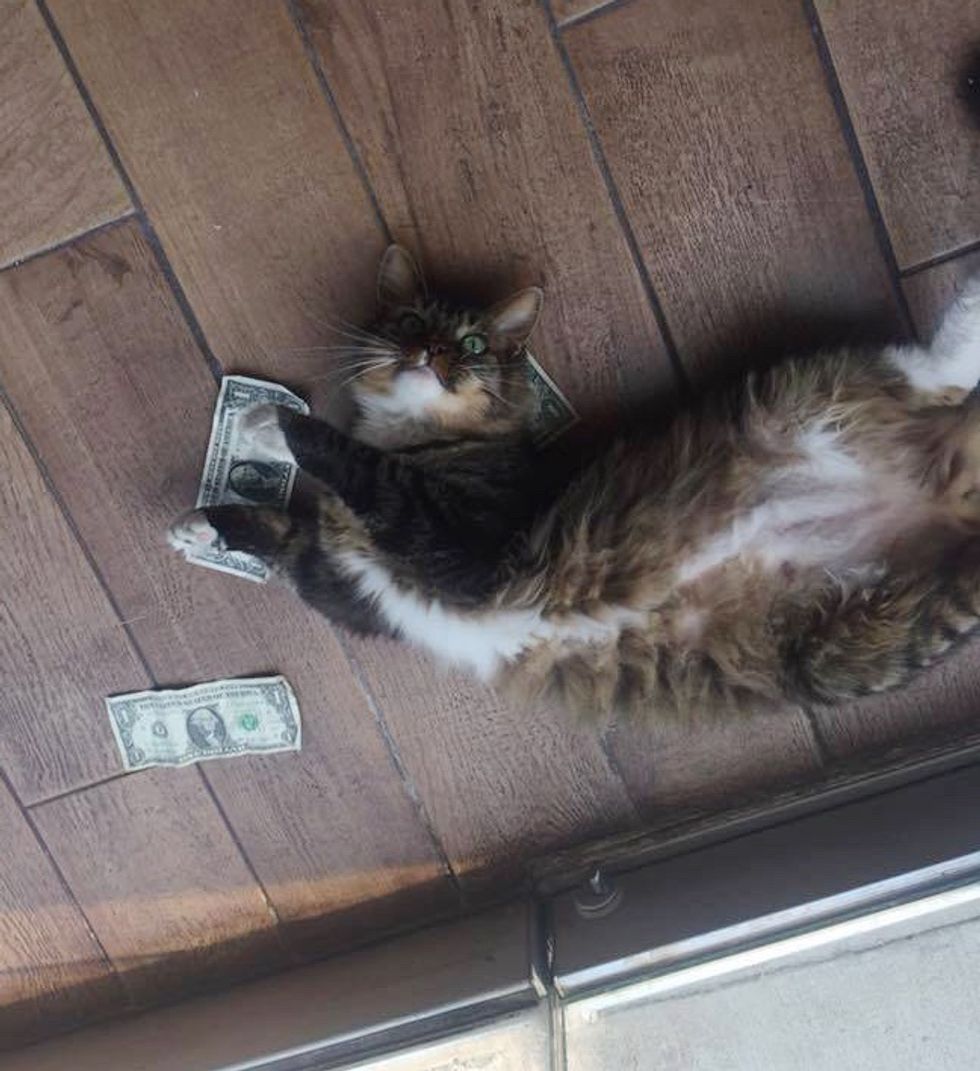 They put up a "Warning" sign by the door for all passersby to see.

"CASHnip Kitty is a hustler with a philanthropic heart. He will snatch your money and donate it to the Tulsa Day Center for the Homeless. CASHnip Kitty says, 'Slide a dollar through the slot and great blessings will follow.' Search #CashnipKitty on Facebook to see his take each week!" 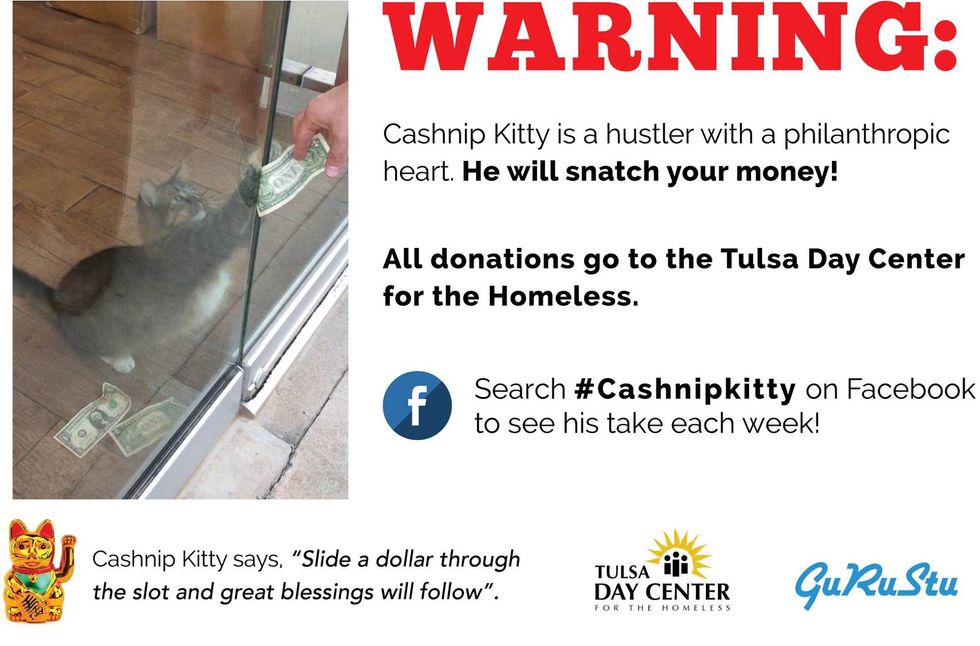 "Being in the downtown area we see a lot of homeless people pass by our window as they walk to the various nonprofit agencies who provide them services, like the Tulsa Day Center for the Homeless. It weighs heavy on our hearts," Stuart told Love Meow.

"Many of these people stop and play with our Kitty through the front window. They never bother us, they just love to tap the glass and say Hi to the Kitty. So that's why we decided to donate CASHnip Kitty's dollars to the Tulsa Day Center for the Homeless." 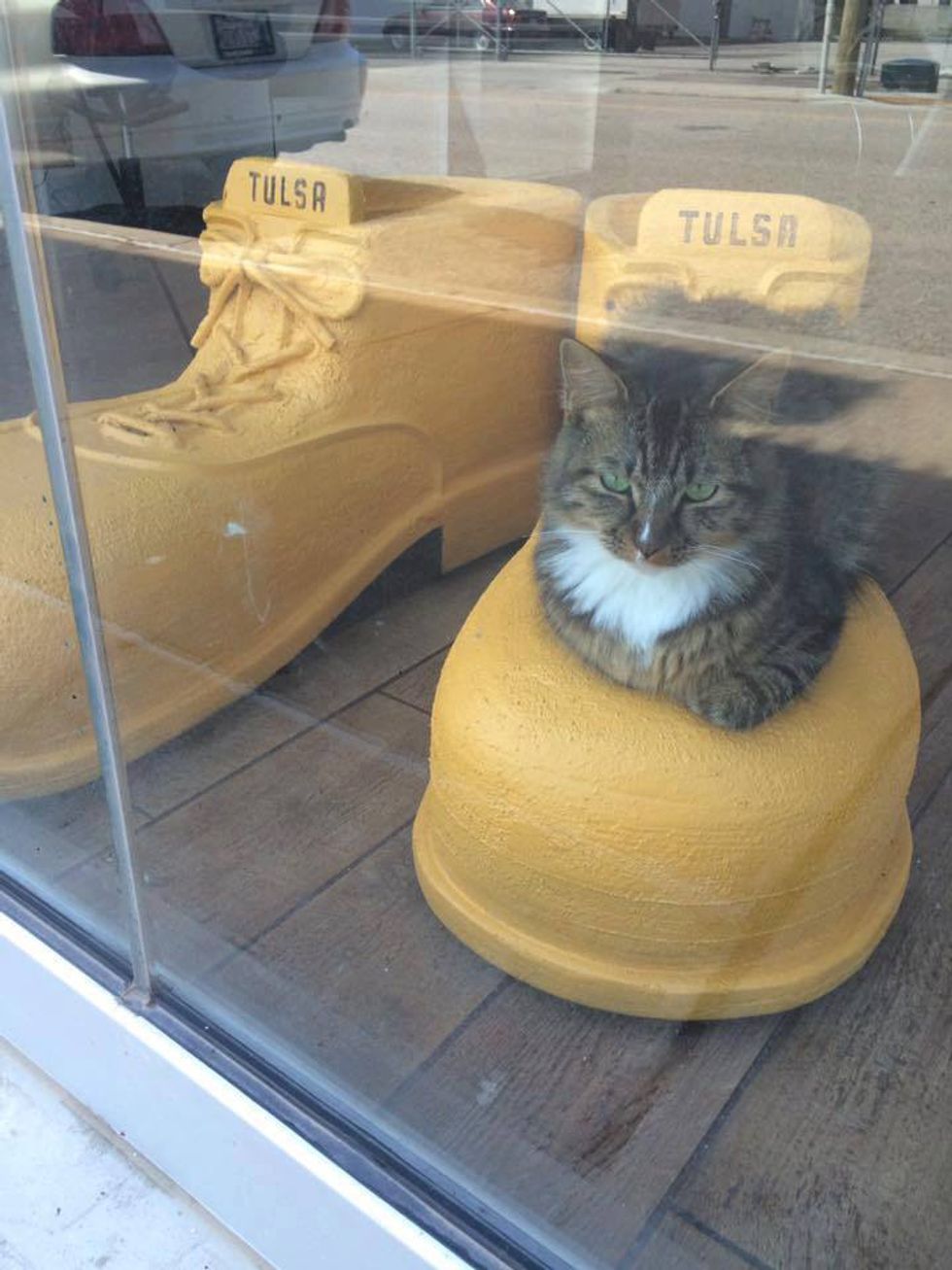 When CASHnip Kitty was still a kitten he would whine until someone picked him up, thus it earned him a nickname, Sir Whines A Lot (like Sir Lance a Lot). Now he's two years old, just like the Japanese Beckoning cat, Maneki Neko, entertaining passersby and doing something good for his human friends.

So far the tabby boy has raised and sent over $100 for the Tulsa Day Center. He's very proud! 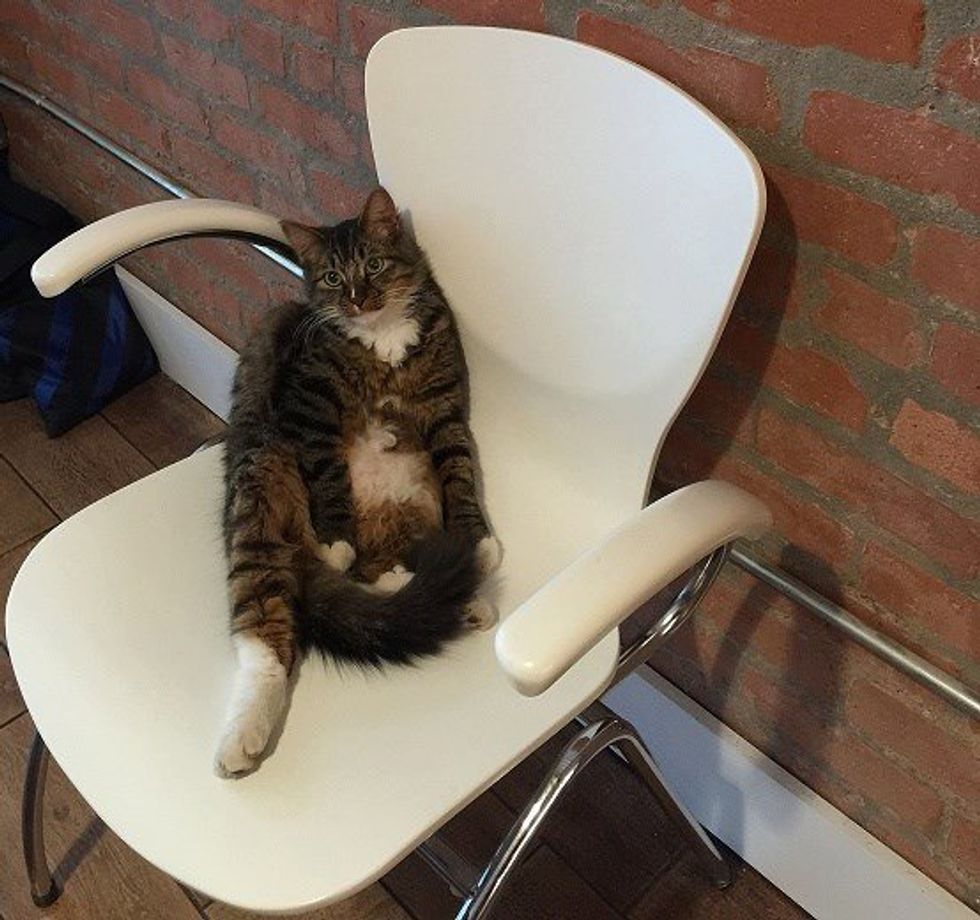 The former homeless kitty knows the meaning of a second chance.

It's changed his life forever, and the sweet tabby is returning the favor by helping humans in need. 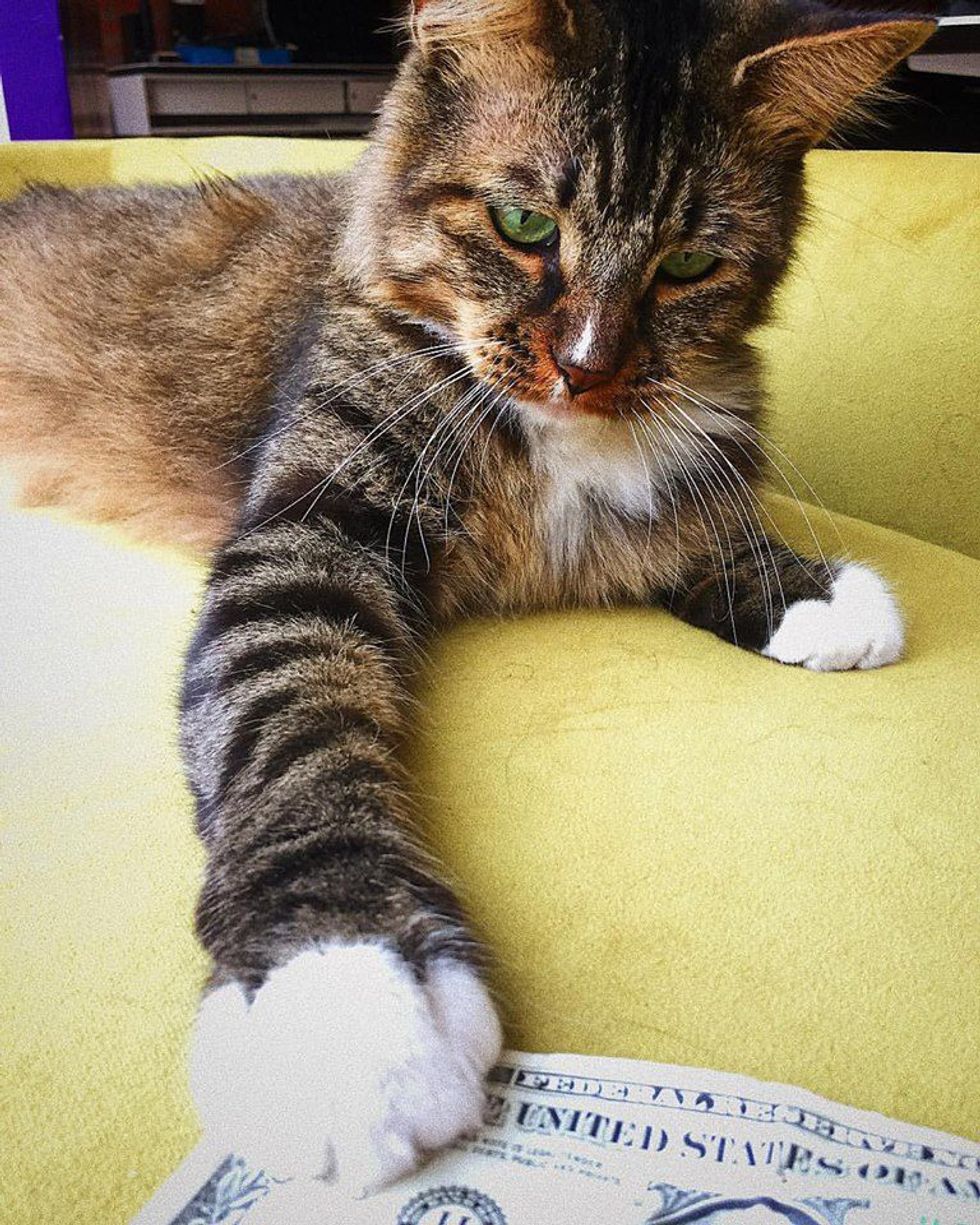 CASHnip Kitty doing what he does best!

Cashnip kitty continues to hustle and snatch his stash. 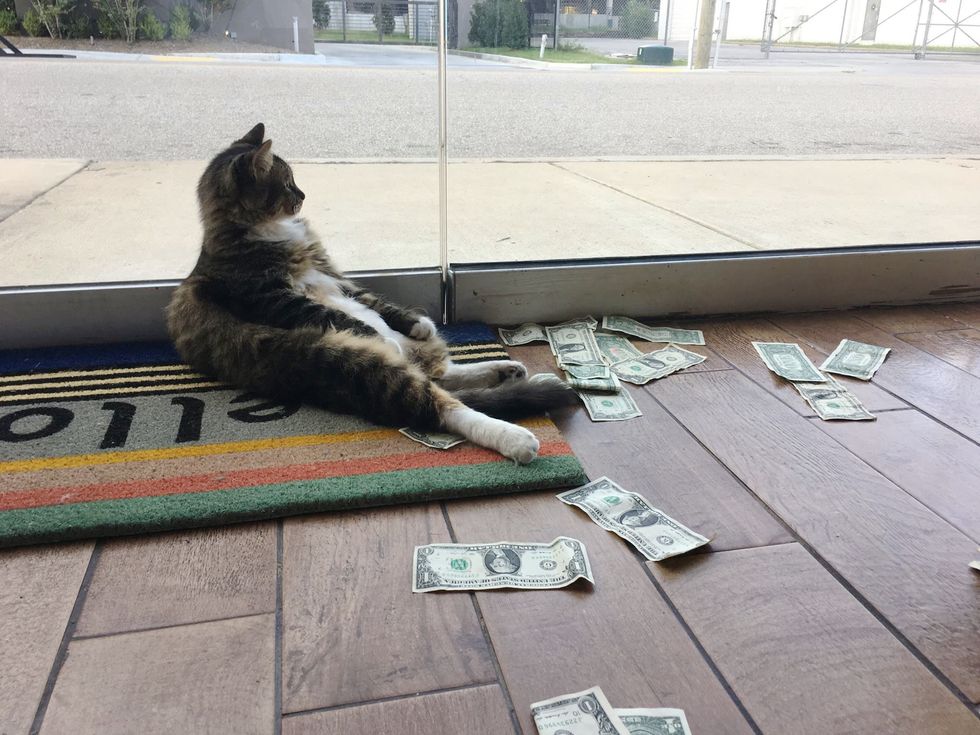 Many generous donations have come through the mail to help with his cause. 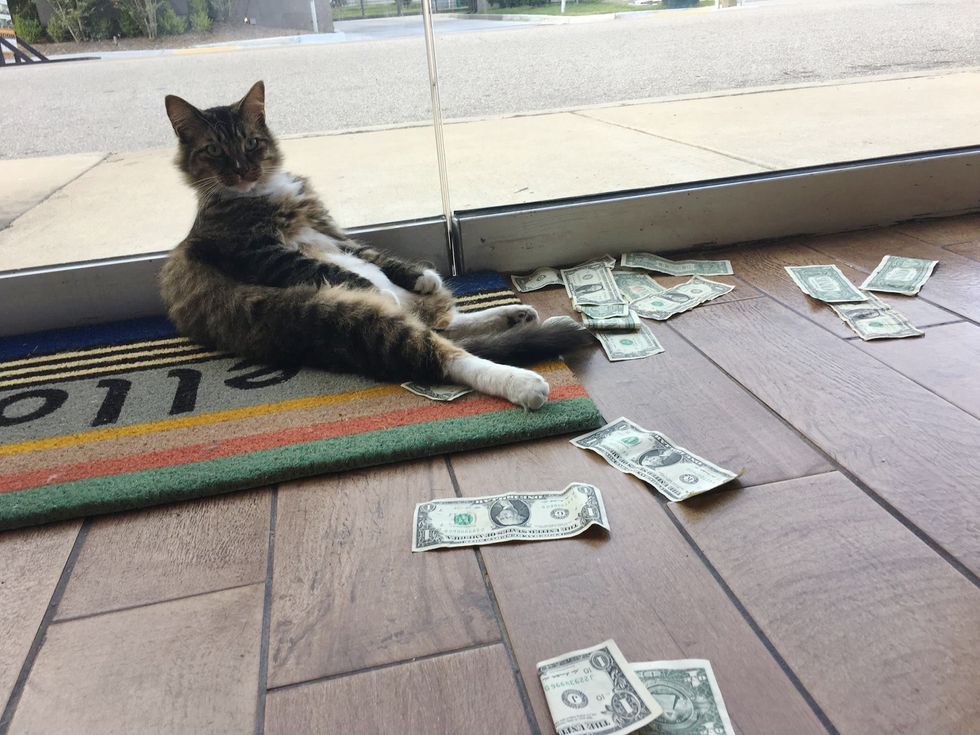 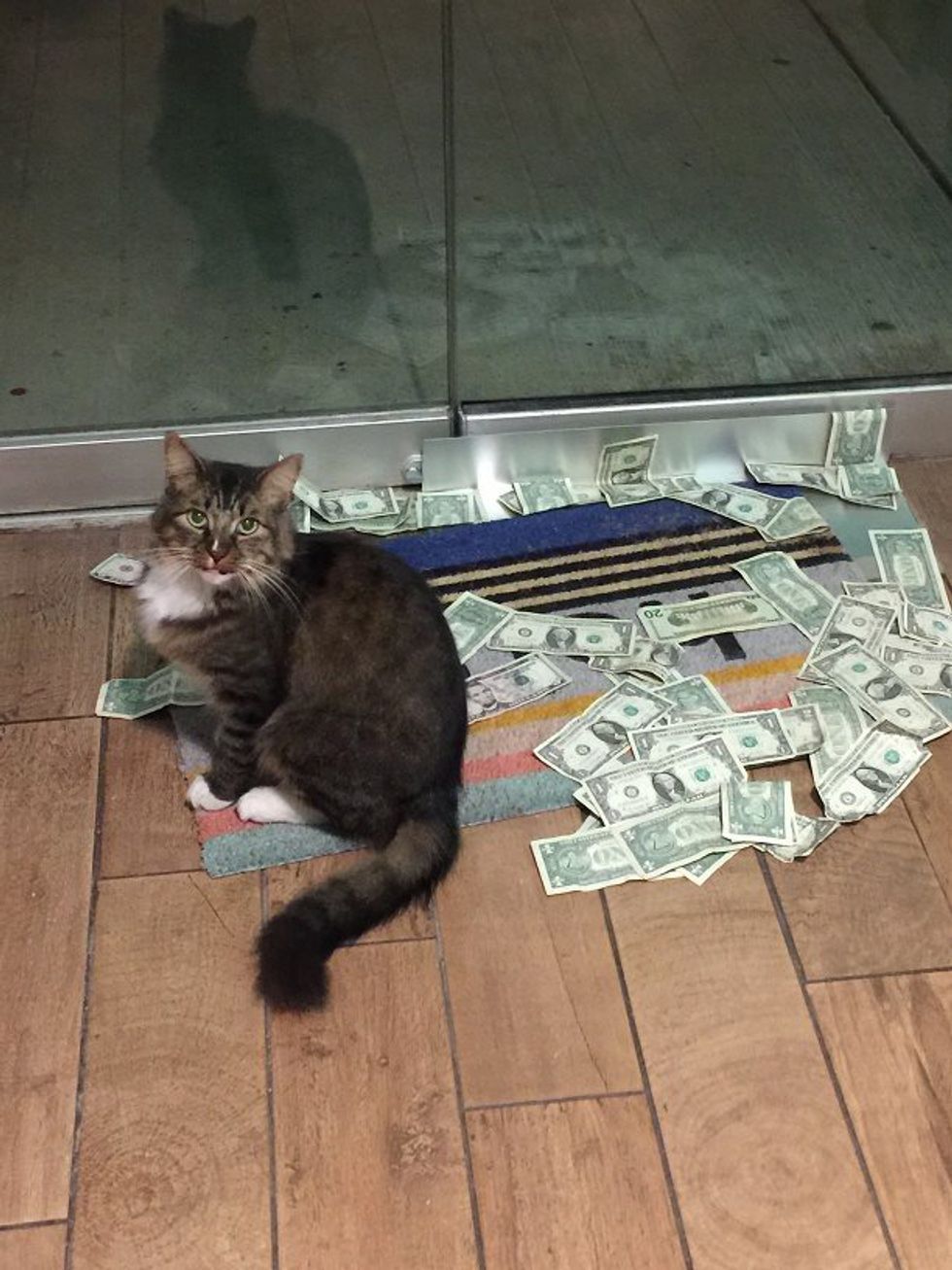 After a hard day of dollar snatchin', loving some belly scratchin' :).