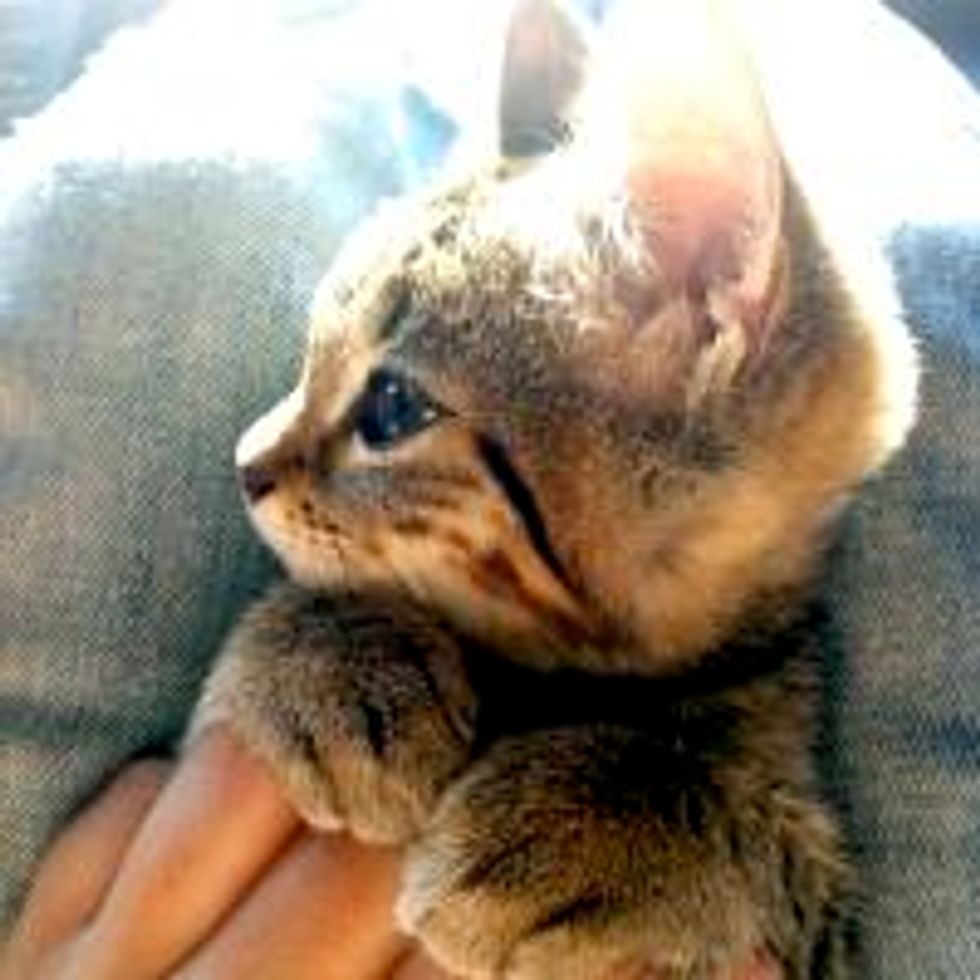 Rescue Bengal Sketches Can't Walk, But She is Full of Life

Sketches the rescue Bengal is special. She may not be able to move like other kitties, but she is extremely happy and active. A couple from California brought her home, giving her the best care they could provide while helping her look for a good home. After months of treatment and searching for a purrfect home, Sketches was adopted by the people who gave her a second chance at life.

Beginning of the story by Andrew L. (Sketches' Facebook page)

We were visiting our local ASPCA after a long day at the DMV, and there was a woman there who was hysterical. She had found the kitten on her lawn in a trash bag, and brought her to the pound to see if they could take her. The woman at the front desk said they would have to put her down, because she was "not normal, and in a lot of pain."

The lady at this point began crying, saying how she didn’t know what to do, this kitten was such a happy, carefree kitten and she didn’t want to put her down. Her husband had told her she could not keep her any longer because they already had four cats.

The couple, Andrew and Lizzie, offered to take the kitten. "We took her, had a slight panic attack in the car (realizing what we had just undertaken!), and drove to the vet for shots," wrote Andrew.

The vet diagnosed that Sketches's spine was injured, thus her back end is not functioning properly, causing her half paralyzed and slightly incontinent. Andrew has her wearing preemie diapers and has come up with a routine feeding schedule which works perfectly for Sketches daily needs. Lizzie is Sketches at-home massage therapist.

Since then, they have taken Sketches to see a neurologist and follow it up with acupuncture sessions. Over time, they have noticed a huge progess in her toes. "Little things like flexing her digits, stretching the leg out and reacting to my touch.... I like to think it gives her hope of regaining some movement down the road," said Andrew.

The couple tried different ways to keep Sketches in shape. They experiemented with hydrotherapy, so Sketches could exercise her legs in a warm bath. Andrew built a wheel chair for the little Bengal, but she outgrew it in just a week.

Sketches moves her tail for the first time:

In the meantime they were looking for a perfect home for Sketches because of their living condition which made it difficult for them to keep her.

The adoption process had a few bumps. Sketches returned back to Andrew and Lizzie when the new home didn't work out. It was a joyful reunion for the couple and when they saw Sketches again, they knew they could never let her go. Edit: In the meantime, the couple was still hoping to find Sketches a home that is right for her, as much as they wanted to keep her more than anything. The search went on.

"The search was a quick one. A gracious and intelligent woman from Maryland contacted us asking if she could adopt the kitten. Her credentials were without parallel – she had invented, marketed and successfully sold diaper covers for special kittens like Sketches. She had raised cats like this before, and her last one had just passed away during the holidays. She worked from home, and had the means necessary to provide for Sketches what we could not. Lizzie and I agreed to let this woman be her new mom.

A few days ago after work, I drove the kitten to San Francisco International Airport (alone, as it was Lizzie’s birthday). It was, as many may expect, a very difficult drive. There was happiness about both providing this kitten a better life and giving this woman such a source of joy, but immense sadness from wishing I could have done more for the animal and spent more time with her. This tempest of emotion nearly got the best of me both as I waited in baggage claim, and as we exchanged the kitten and her belongings, but thankfully I maintained composure. The woman handed me a birthday present for Lizzie, one so sweet and so thoughtful that it caused the most concerted effort I’ve ever had in my life to not cry. It was a pink, stuffed cat, wearing this woman’s adorable diaper cover, and a cat collar with a tag that read “Sketches” on the front, and “I will love you furrever” on the back. “When Lizzie has her vet’s office,” she said, “she can put this on her desk and remember.”

Lizzie and I sat on my couch that night with teary eyes, tight throats, an empty bed behind me, 18 unused diapers in the bag next to me, and two big smiles. I was able to utter those words that every man so yearns to say, “I told you so.” With a big, sad, happy, cocky and truly humbled smile, “I told you we would find her a home.”

Happy Sketches at her forever home!