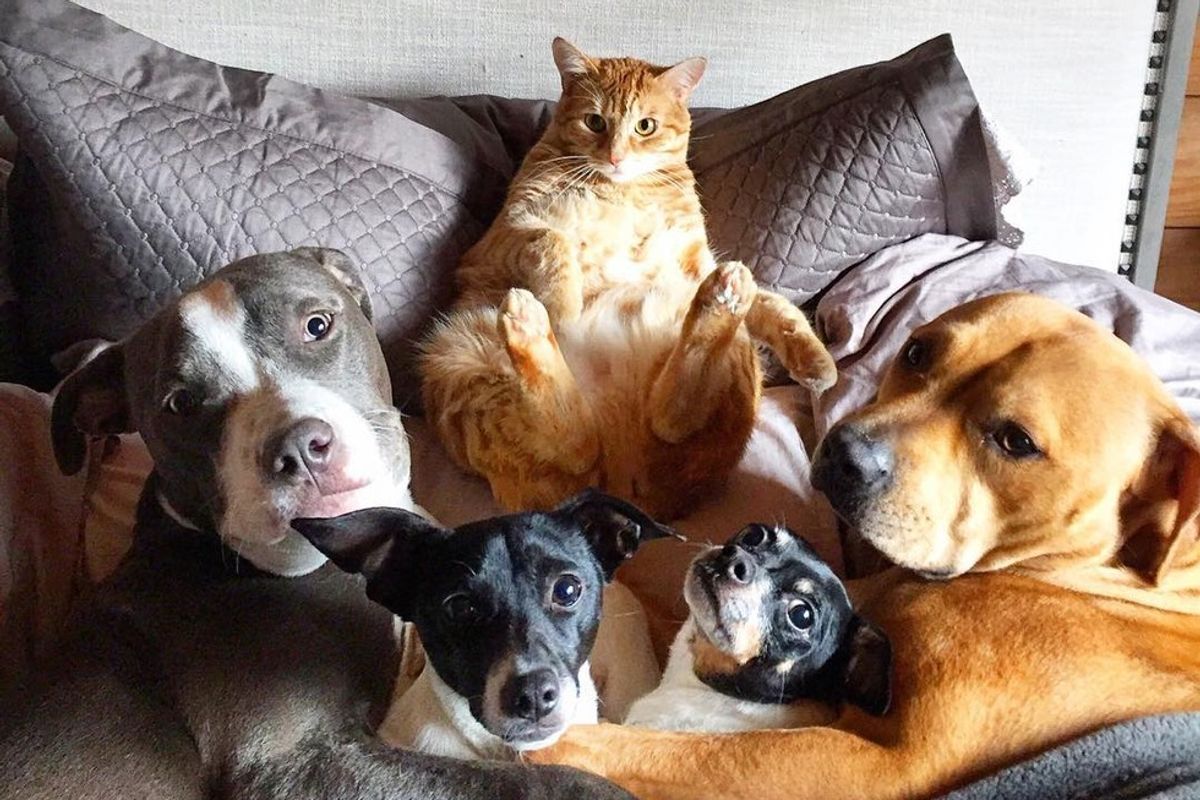 A cat barely escaped death thanks to a rescuer who came to save her in the nick of time. Now not only has she found her forever humans, but also 6 other siblings that are also rescues - 4 dogs and 2 ducks.

Meet Mia the cat and her pack!

Mia was just a tiny kitten when she was saved from death row by an animal rescuer.

"She was rescued just an hour before she was going to be put down at one of the highest kill shelters here in Missouri," Kasey Boggs, Mia's human mom, told Love Meow. "When I first laid eyes on her I knew it was fate, she was not about to let me leave without taking her home. It's as if she could predict her future!"

Mia became the only cat in the house full of many rescue animals. "She is the only feline in our pack because that's the way she likes it."

This half ginger tabby and half American bobtail adores her siblings and wouldn't be anywhere without them.

Mia shares quite an adventurous passion with her siblings. She grew up with dogs and sees herself as part canine.

"She enjoys car rides, long hikes in her backpack and exploring the outdoors by climbing trees and catching grass hoppers. She also loves running streams and creeks," Boggs said.

"When everyone is getting suited up for our adventure. She goes right to her backpack and lays on it, it's her way of saying don't you dare forget me," Boggs told Love Meow.

Mia may be the only cat in the house, but she is the leader of the pack and always looks out for her family, furry, feather and human kind.

The family recently welcomed two new members into their home.

"After taking in the ducklings it became very apparent to me just how unique Mia really is. Her ability to accept the ducklings as her siblings and completely ignore her natural instincts is captivating."

"She takes care of our family. I recently found out I was pregnant and I had severe morning sickness. Mia never missed a trip to the bathroom with me as she was very concerned and compassionate to me being sick.

"She would then return right to our bed and cuddle up to my face to console me back to sleep."

"If any of the pack members are down or feeling sick, she gravitates to them," Boggs told Love Meow. "She is the most caring being I have ever met."

Mia keeps her siblings well groomed and prefers drinking out of the same water bowl as them. "We've given her her own, but she prefers to be one of the pack."

"Most felines are pretty independent but not Mia. She takes her role as part of the pack very seriously," Boggs added.

"There is never a time we aren't all in the same room of the house let alone on the same couch or bed."

Mia is very communicative. If she has something in her mind, she will voice it. This outgoing kitty can also do tricks no less than her canine friends.

"She talks to us, and grabs our attention to direct us towards things she feels we need to know," Boggs told Love Meow. "She is a very smart girl as she comes when her name is called."

Mia is never allowed outside alone. Whenever she hears the word "outside", she runs to the door with all her siblings and is ready for their daily adventure. When it's time to get back inside, she's always the first at the door.

She likes to lead the pack whenever they are hiking or taking a walk in the park.

Three years ago, Mia was given a second chance at life. Now she gives back to other animals and humans every day and is incredibly grateful.

"I've never met another cat like her," Boggs told Love Meow. "She's the love of our lives!"

Related story: Cat Makes Friends with a Chipmunk in These Cute Photos