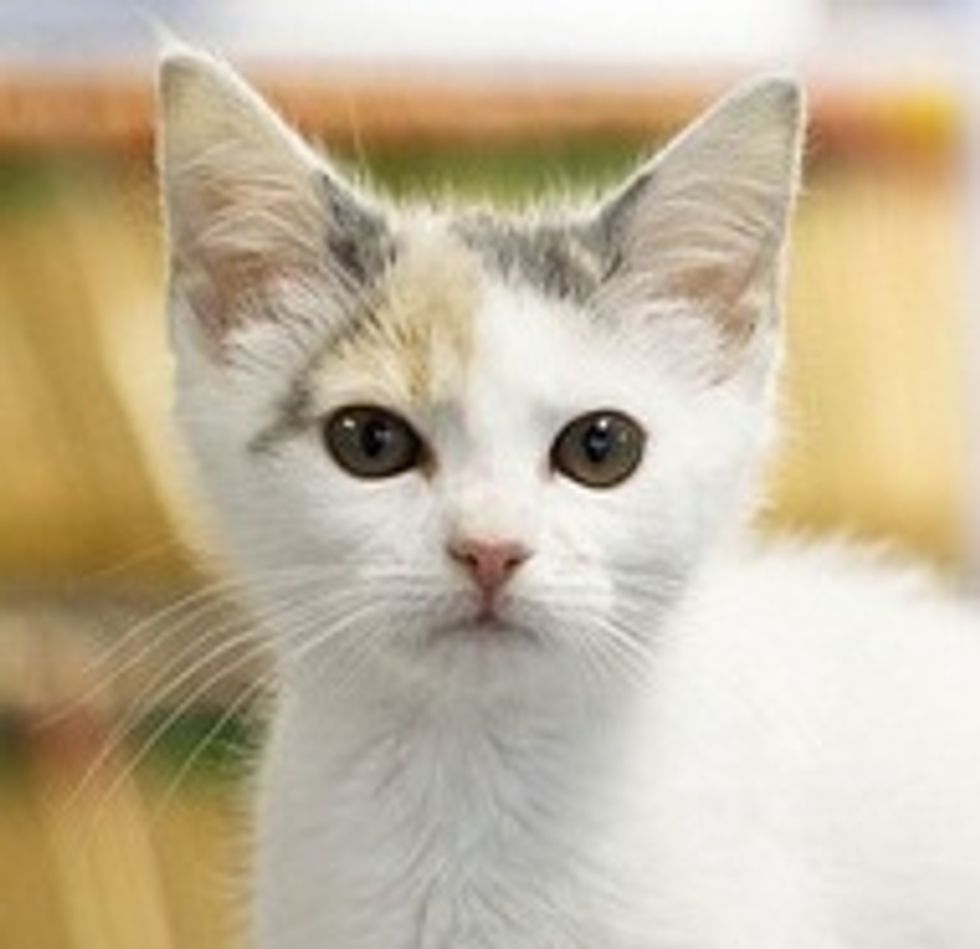 Meet our new little foster baby, who will hopefully remain un-named because she will have a new home before I get too attached and want to keep her...

She was found running down the road on Saturday evening, by some kids who picked her up and put her on their bike and drove her to the one store in town, where they asked what to do with her. The kind people at the store told them to bring her to the animal hospital - Cabin Creek Animal Hospital - (where I work) at 6:00a.m. on a Saturday. I think they are on to me... they know I live here and can't turn down a needy little critter. Even at 6:00a.m. on a Saturday, especially at 6:00 on a Saturday!!

So the kids brought her here, and I happened to be outside with the dogs. They showed me the kitten and told me her story. I couldn't resist. I told them I would feed her and get the fleas off of her and get her into rescue on Monday. One of the boys gave me a small donation to go towards her care, which I thought was so kind and thoughtful.

So I brought kitty in, dewormed her and treated her for fleas, set her up in a nice big cage with a makeshift kitty bed and some food and water. She drank water for about 2 straight minutes, the poor girl has been outside all alone in this awful, dry heat wave. Then she devoured her food, and later she walked over to her bed, climbed in, and snuggled down, making biscuits with her tiny little paws, and purred the loudest kitten purr I have ever heard! She was just so grateful for her food, water, and bed.

I called the local cat rescue, and they are full. So she is staying with us until she finds a home! The cat rescue did offer to put up pictures on their website to help us out, so I am grateful for that. I hate to see her go, but I know I can't give enough time and attention to a fourth cat.

Today I put a little tiny collar on her with a bell so we can hear where she is at all times. She has been running around and playing, and has met Alice (a brown dog) and her Boston Terrier friend, Fenway. She didn't like them at first but has become more comfortable with them. We haven't had a kitten around in so long! The last set of kitties that were dumped here were about 5 to 6 months old. This one is about 8 to 9 weeks old, such a wee little baby!

The first couple of days she was very scared and hissed every time she saw another animal. Around here, it is impossible to avoid seeing another animal! Yesterday, she started to get a little more comfortable and confident. When she was out having playtime, she discovered the food in Elvis' cage (Elvis is a clinic cat) and when she went to check it out, she discovered Jimi (the cat) in Elvis' cage! Since food is the universal motivator, she went right up to the bowl, and there she met Jimi nose to nose. No hissing!

This morning I let them meet on even ground, and all was well. You can see her tail is fuzzed up, she was a little nervous, but Jimi was very quiet and kind and gave her a little kiss on the head. After this we played for a few minutes with the kitty toys, and they became good buddies.