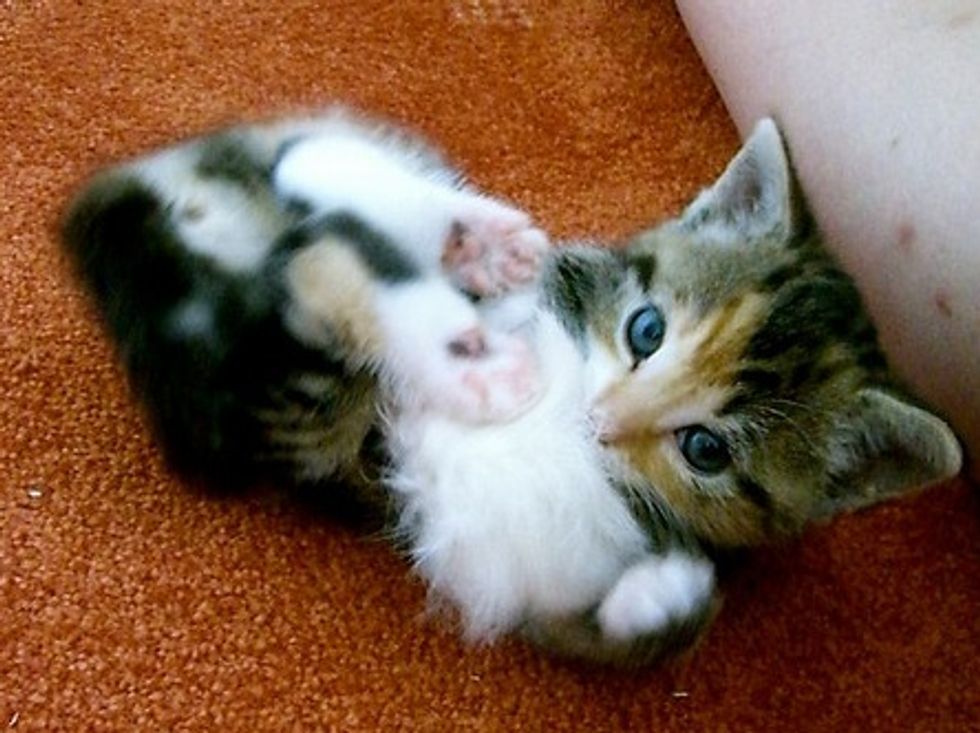 Belle and Sebastian came into the Nottingham RSPCA animal shelter in August 2009 after being found with their mum, Betsy, underneath a hedge in somebodies garden. They were barely a few days old and Betsy had been caring for them. There were only the two kittens and we had a really lucky spell of warm weather which ensured they made it through their first week.

They came into the shelter after a neighbour noticed them and then were bundled straight out to me at less than a week old. They barely fit in the palm of my hand. Betsy settled in straight away & was very happy with the home we set up for her and the kittens in our living room.

As they grew stronger they started to venture out of the cage more. First their eyes opened, bright blue and full of adventure. Then they started crawling around the cage, mewing for their mother to come back with their dinner! I was really lucky to have been able to see their eyes open for the first time, see their first little baby steps out of the cage and see them turn into nice "chunky" little kittens.

I desperately wanted to keep them both. When they went back to the shelter it felt like a terrible wrench. Betsy was adopted by one of my friends so I see her all the time (she stays here when my friend goes on holiday with her new friend, Holly).

They went back to the shelter in October 2009. I'd already told my boyfriend that if they were still in the shelter when we came back from our holiday (5 days later) that I would adopt them myself because they were too pretty to be in captivity!!

They were adopted less than a week into their stay at the shelter and were re-homed together. The RSPCA were really happy with the care they received whilst they were with me and it was evident that they were two very healthy, happy and well-adjusted little kittens.

My favourite part about having them was the cuddles! I'd lift them onto me when I was watching TV and they'd just go to sleep across my stomach. I remember one time I was eating a sausage sandwich and Sebastian was sat next to me waiting for a bite. He wasn't going to get one! Anyway, he fell asleep sitting up next to me and then toppled over a little bit, waking himself up.

Belle and Sebastian went to their forever home about a year ago. :) I still miss them so much!! I have all the photos I took & I look at them all the time.