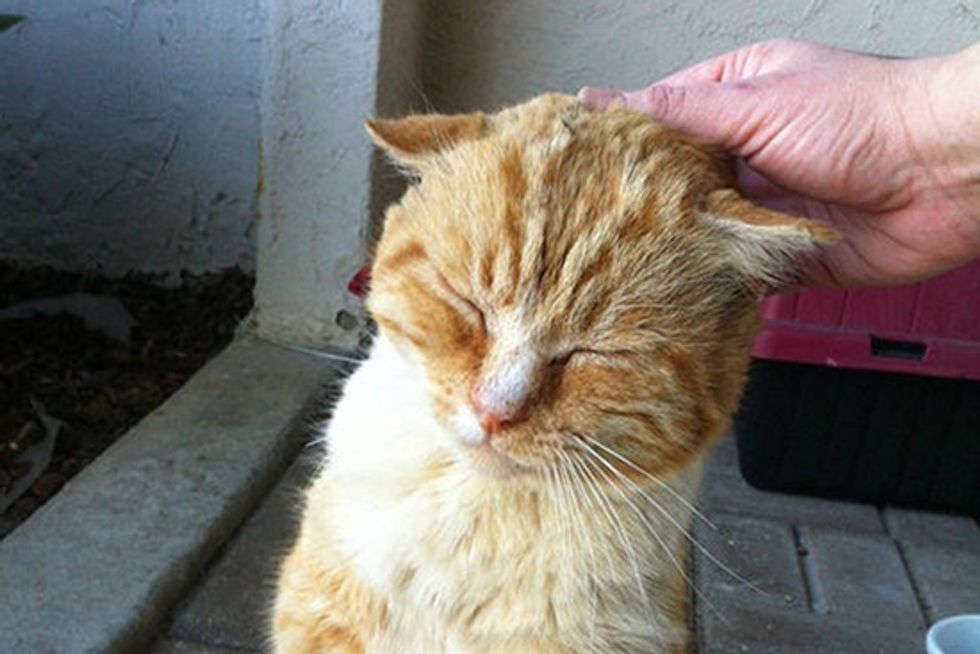 A feral ginger cat came into a family's life when they discovered that he came to their porch for food. Over the next 7 years, he gradually opened up to the family and eventually allowed them to rub his belly, which became one of his favorite things. His name is Lumpy and this is his story.

"We noticed him sneaking to eat off the porches at two houses with outdoor cats. We started leaving food out for him so he wouldn't have to scavenge for scraps. Over the next few months, he grew more used to us, and would not only show up for breakfast and dinner, but often hang out in our yard, and seemed to enjoy being pet - especially his belly. It took several months of him rolling around on his back before I worked up the confidence to rub it in case he took off my arm," said Jeepersca via reddit.

"When we first started feeding him, we had a full house, and couldn't really take on a new pet. He was scrounging for food, and we're suckers. And... he's adorable. We knew at the very least we were giving him a better life - he had a dependable food source in us. (And groomer, flea medication, love).

As time went on, we realized he was sort of 'ours.' We went through a few periods where he disappeared for a week and I was heartbroken, but then he'd show up, grumpy and hungry, and then... why yes, I would like my belly rubbed, thank you. When we'd take trips, our pet sitter was given instructions on feeding him. Our petsitters rock so much they'd fill his water bowl with ice in the summer. We set up that house for him to keep him warm when it was cold.

He walks like he is animatronic and sometimes shake... but he purrs like a rusty lawn mower and drools when you scratch him, to me he's perfect."

"Always sweet to us, though we found out he never let any of our neighbors get close to him."

"Lumpy waiting on the porch for food, always holding up that paw."

"After he ate he'd loll around on our porch..."