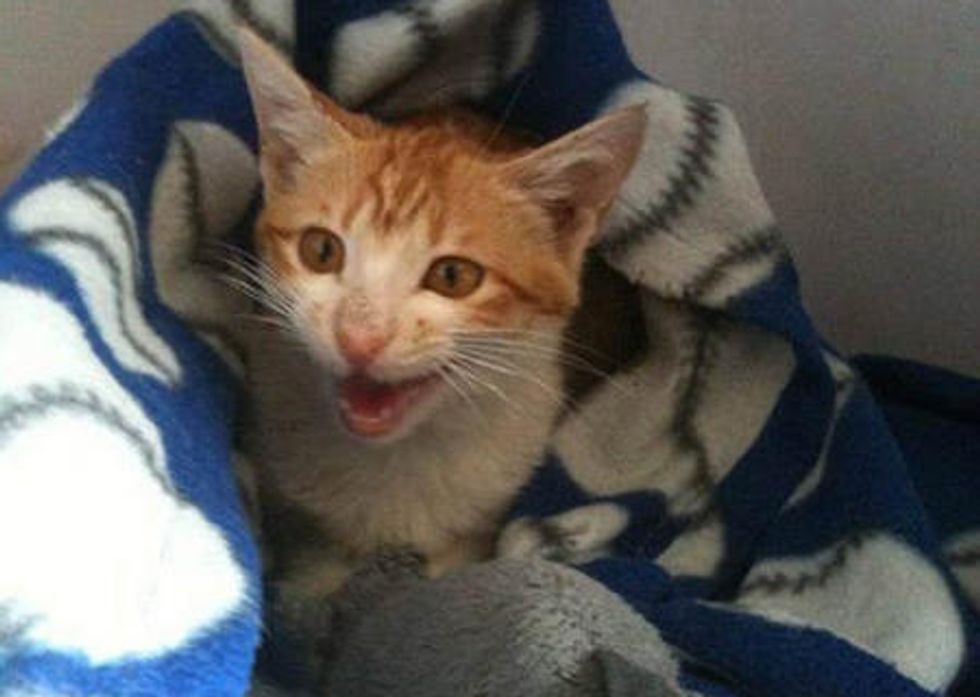 A stray cat was found by a soldier who gave her his food. That was the moment, the ginger and white cat decided that he would be her caretaker. This is the story of a cat rescued in Afghanistan and her human trying to take her home to the US.

It was a cold, wet, dreary morning and I was getting ready to start my guard shift. Endless hours of solitude and silence... I opened the door to my guard shack and found that there were little muddy paw prints everywhere! And I mean everywhere!

I also found two bones both gnawed down to nothing. Around the time I finished (cleaning up), I heard a loud meow coming from outside the door. I opened it and right between my legs shot an orange blur of fur. I began to look around for what came rushing in and there, huddled in the corner under the table, was a scared little orange and white kitten.

She was very shy at first and refused to budge from her hiding spot. I gave her one of my boiled eggs and bacon and sure enough shortly after wolfing them down she began to stir. In performing my duties, I eventually lost track of her. When she popped back up, I couldn't help but smile. She had moved from her corner and was soundly sleeping behind my laptop under the heater.

After a few hours, she awakened, apparently with the attitude that this guard shack was her domain and I was her newfound caretaker. And she knew how to get what she wanted. After crying relentlessly I gave in and handed her the rest of my bacon. She was so hungry that even as she was swallowing she kept meowing. She was relentless. She was hungry. And she was loud as hell. I decided to name her Lisa, after the comedian Lisa Lampanelli because she is known for her bawdy loud humor, piercing voice... And she has a mouth on her that just won’t quit. A fitting name, I think!

The next morning I came down to my guard shack and to my surprise, she was gone. I thought to myself that it was no big deal, it was better that I didn’t get attached. The sentiment was short-lived, however, as a mere five hours later, Lisa showed up again and howled for more food. After a few more days Lisa began to come out of her shell and trust me. Her love of attention and pampering began to rival her love of food. Her favorite new toy became my PEQ 15, a laser sight for my M4 Carbine. My lap also became Lisa’s favorite place to relax. She became, and has become, a regular fixture in my day. In spite of my best efforts, I have grown very fond of her and can’t imagine leaving her behind. The thought of not knowing what would become of her if she were left is unbearable. She has become a light in my day, and a source of joy in a place where joy is truly hard to come by. Lisa has become my companion, and I hope that, as her adopted caretaker, I can do right by her and take her home. Home to a place where she will live out her days sitting on my lap, being taken care of and very far away from here.

Lisa was found by a soldier deployed in Afghanistan. He gave her his food, and she decided that he would be her caretaker.

One of Lisa's favorite resting spots - her soldier's laptop.

"She has become a light in my day, and a source of joy in a place where joy is truly hard to come by. Lisa has become my companion, and I hope that, as her adopted caretaker, I can do right by her and take her home. Home to a place where she will live out her days sitting on my lap, being taken care of and very far away from here."

Thanks to Nowzad and all the generous donations, Lisa's now fully funded and will be soon reunited with her soldier at her new home in the US!