They Save Sad Shelter Cat and Turn His Frown Upside Down with Love... (with updates)

A ginger cat had a rough start to life and ended up at the shelter where his fate was uncertain. He looked hopeless with a perpetual frown on his face. 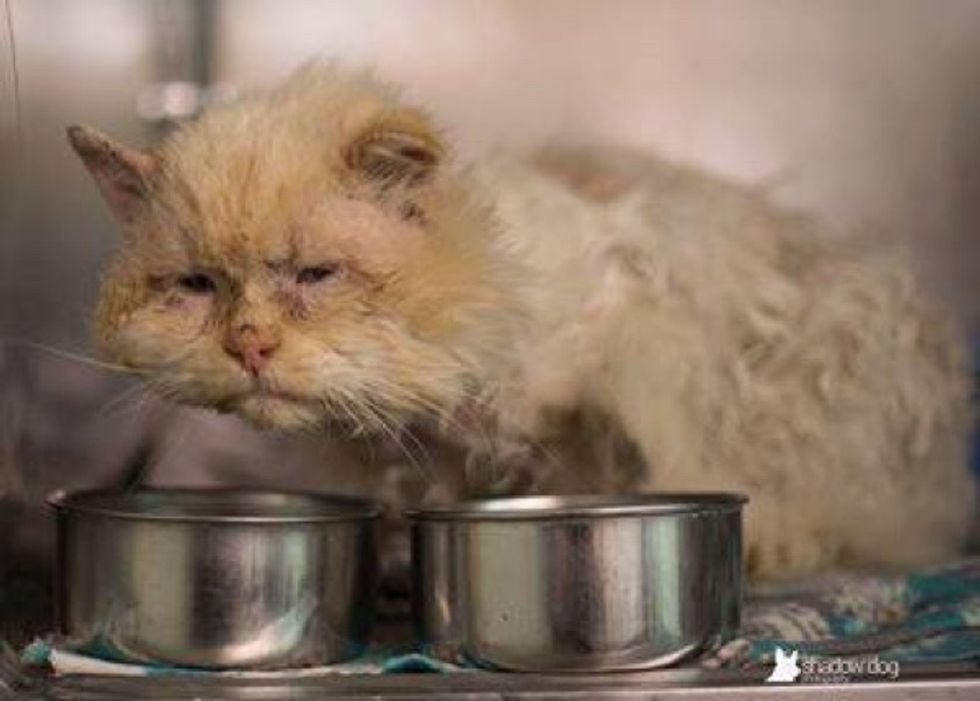 The ginger cat was in bad shape when he was found wandering the neighborhood with a major wound on his neck. He was taken to a local shelter, and soon they realized that Nutmeg would need extensive medical care that they couldn't provide. That's when they contacted Kenosha Forgotten Friends for help.

It's likely that Nutmeg had been living as a stray in the neighborhood for over a year. "He had disappeared for a while and then reappeared wounded," Kenosha Forgotten Friends told Love Meow.

The rescue group rushed to pick him up and took him straight to the Kenosha Animal Hospital where Dr Carlisle was waiting to exam him. 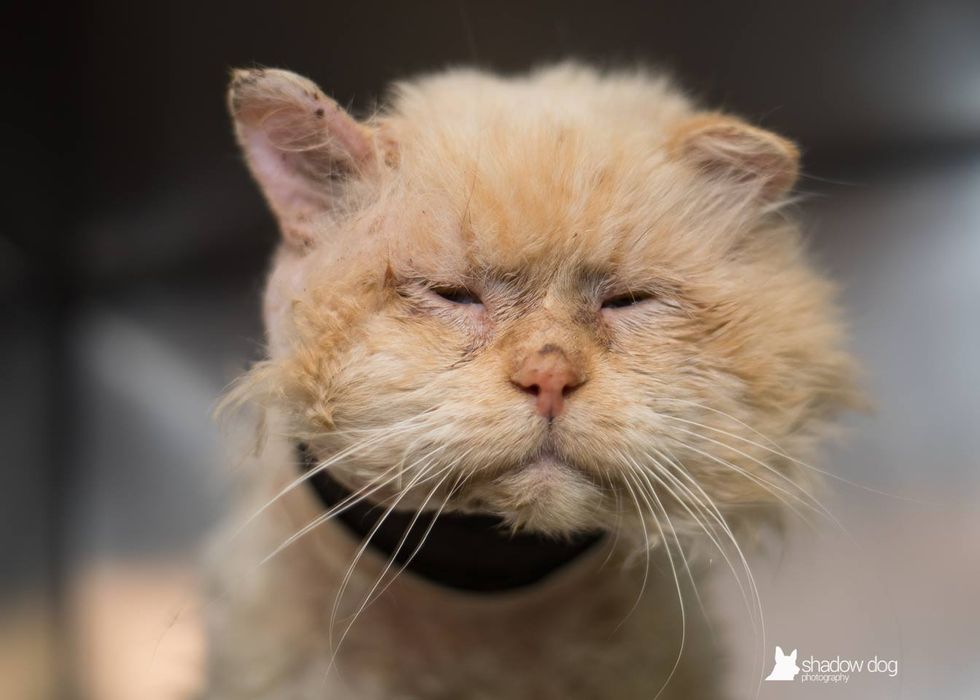 Nutmeg came with a long list of ailments. His wound was severely infected and swollen. The ginger boy had ear mites, fleas and an upper respiratory infection. He was also tested positive for FIV.

"But we know that won't stop him! FIV is only transmitted through deep bite wounds so he will be able to live with other kitties who are mellow like him." 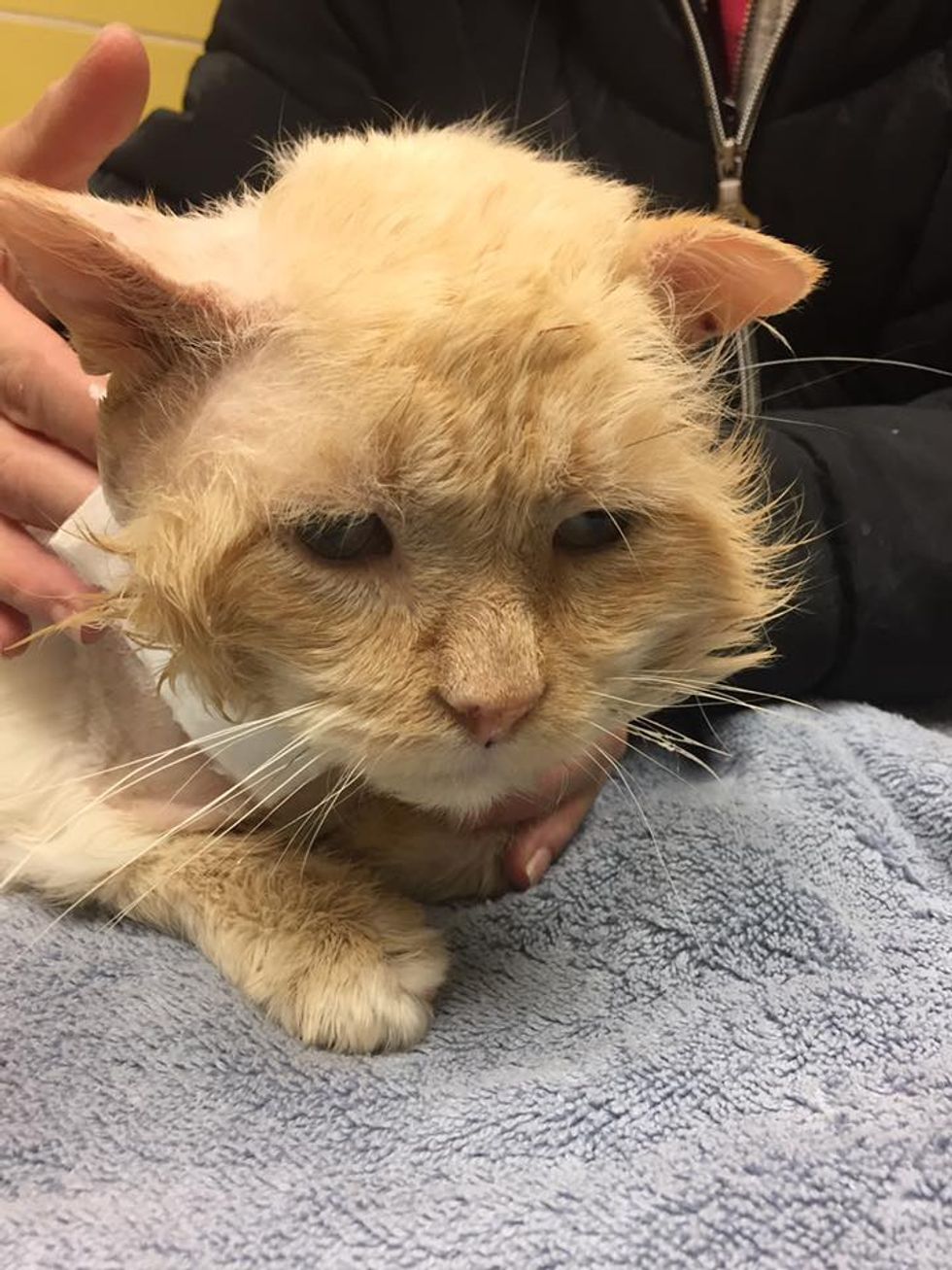 The staff started him on antibiotic injections and laser treatments which would promote healing.

Once he was strong enough, they performed two surgeries to close his wound and many laser treatments to help him heal. He received all the love he could handle throughout the entire journey to recovery. 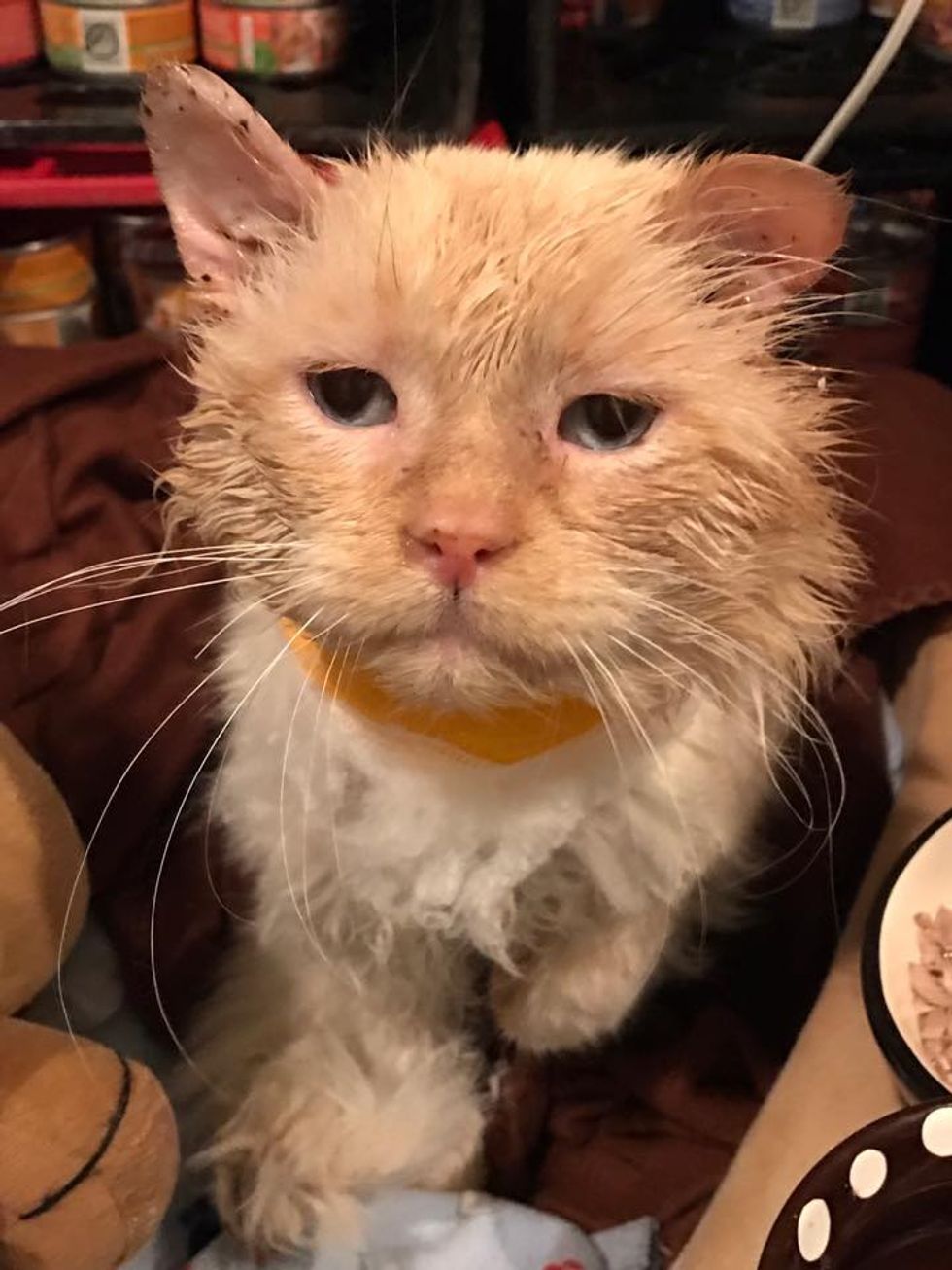 Every day Nutmeg got a bit stronger and his face a bit happier. When he received his first bath the ginger boy was so tolerant of all that was being done.

"We think he knows we are helping him." 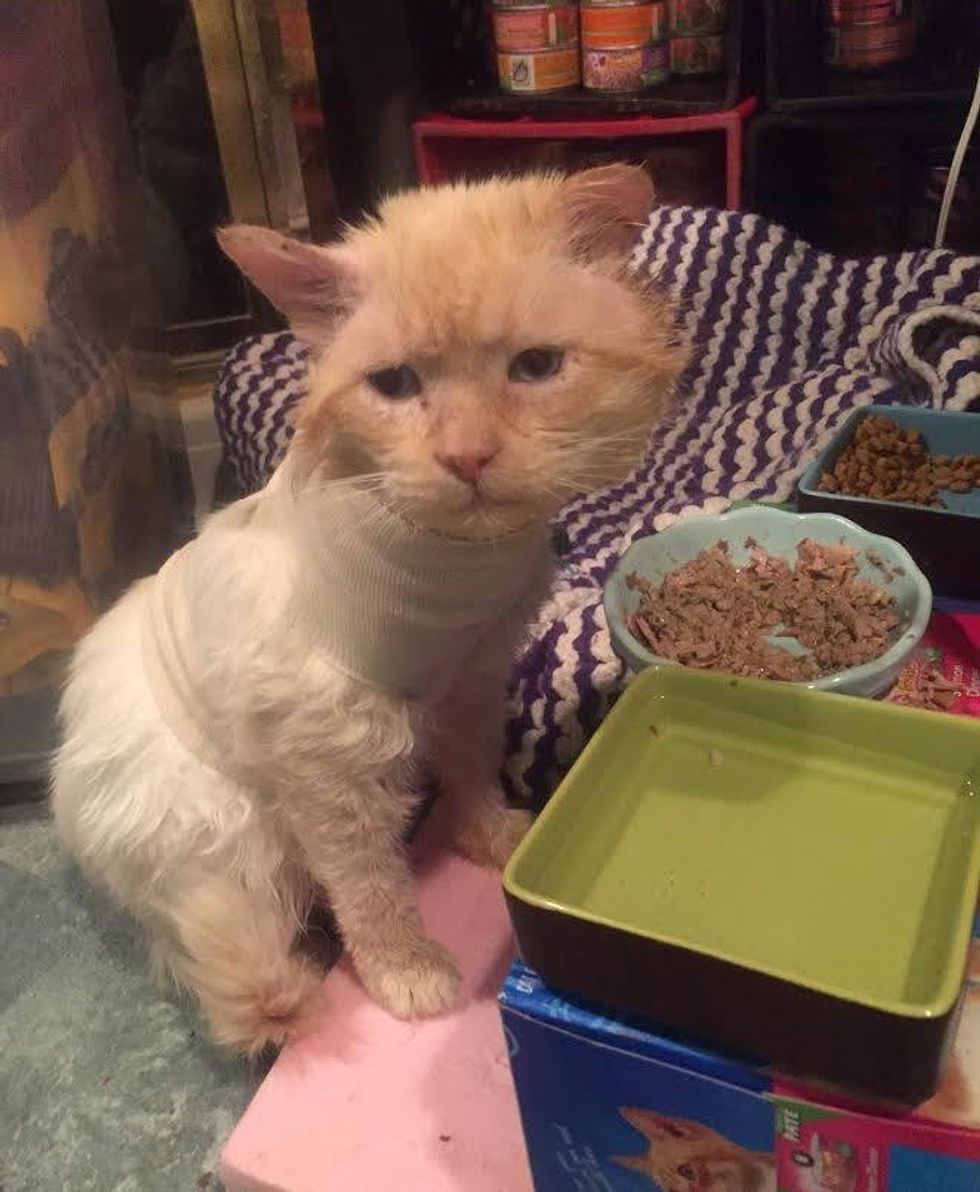 Nutmeg figured out the routine at the vet. "He automatically gets on table and lays over in position for treatments! What a good boy!"

"He is a really sweet boy considering all he has been through," the rescue group told Love Meow. 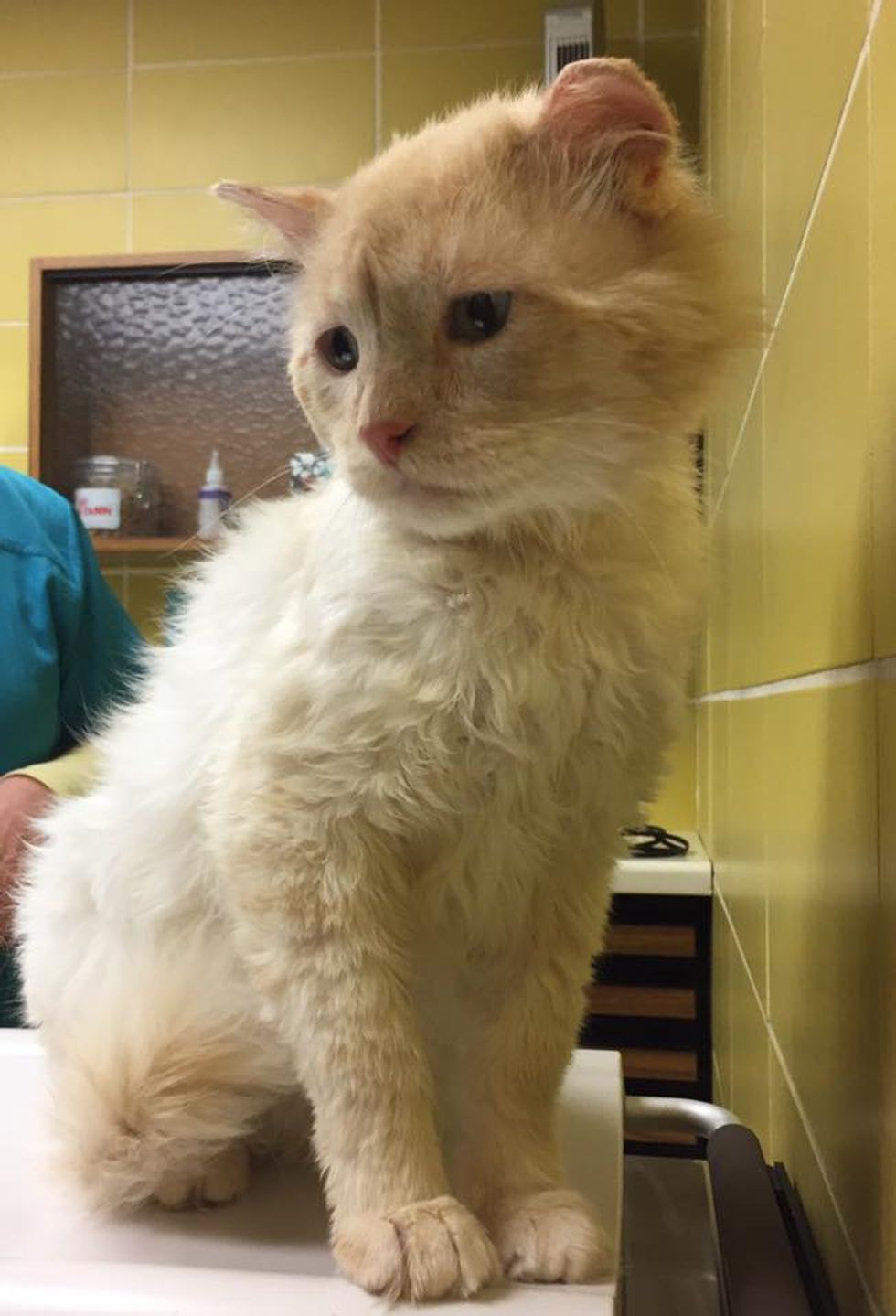 A few months later, he was finally ready for his forever loving home.

Nutmeg cuddled with his foster mom, purring up a storm. 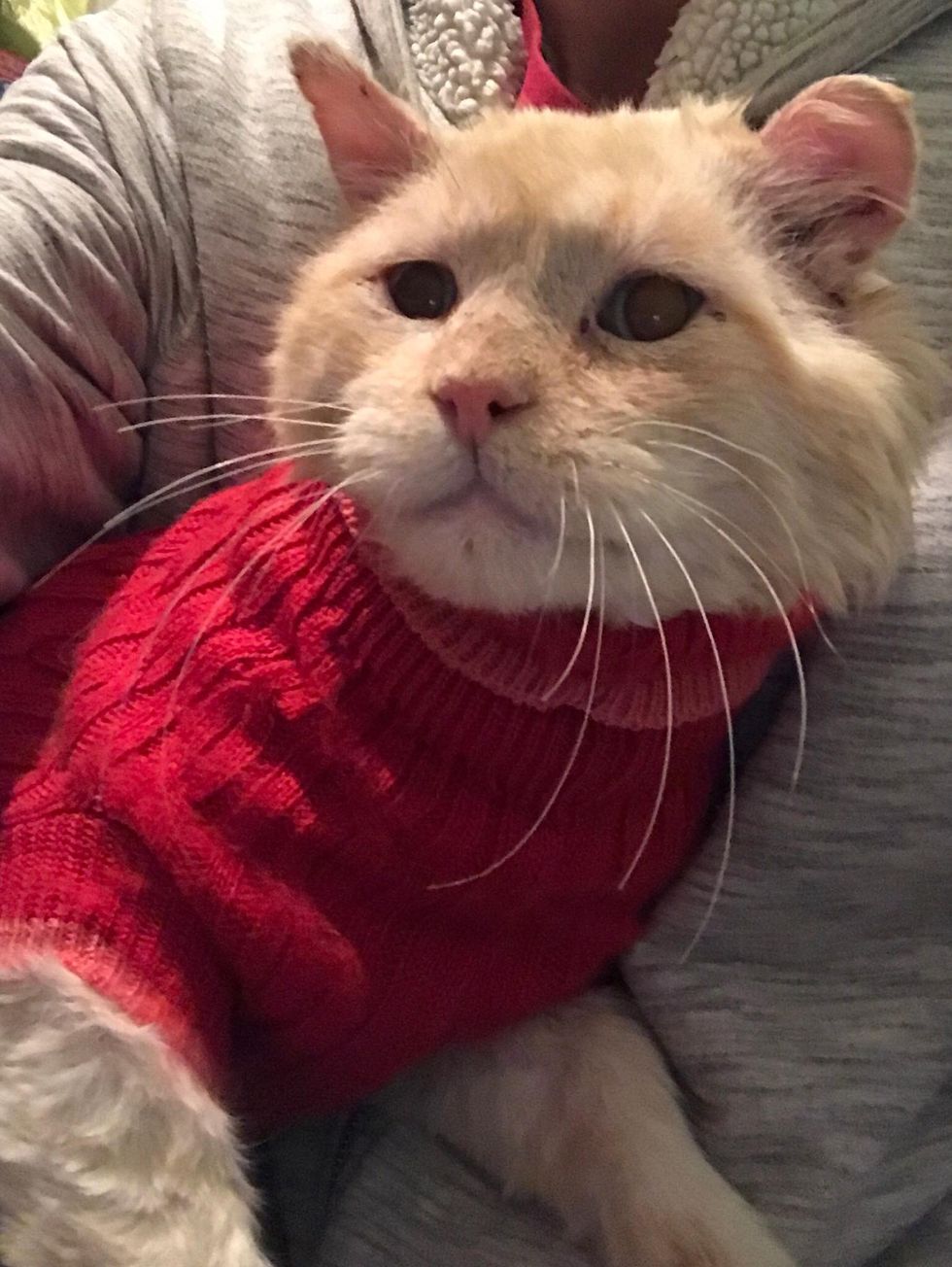 When they saw that smile on his face it brought so much joy to everyone involved in his rescue.

He was once so frail and sad, but now he smiles every time he cuddles. 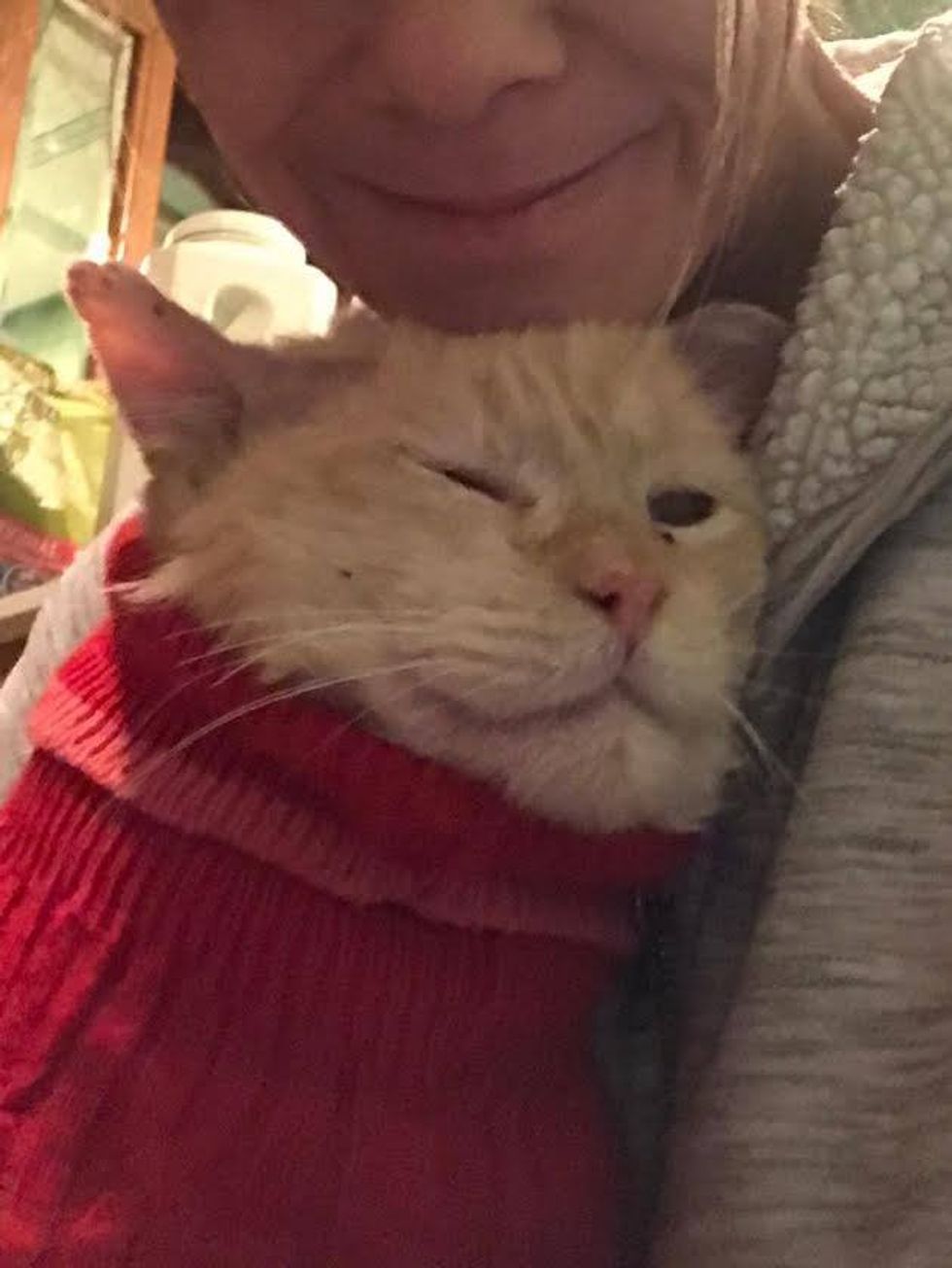 Nutmeg found his forever human mom! It was the happiest day!

"Nutmeg sat in his foster mom's lap for a while purring and snuggling, then jumped to his favorite volunteers lap as if to say 'Thanks caretakers but I'm home now', then went directly to his new Mom where he stayed," Kenosha Forgotten Friends said. "It was a very emotional day for all, as we will miss him." 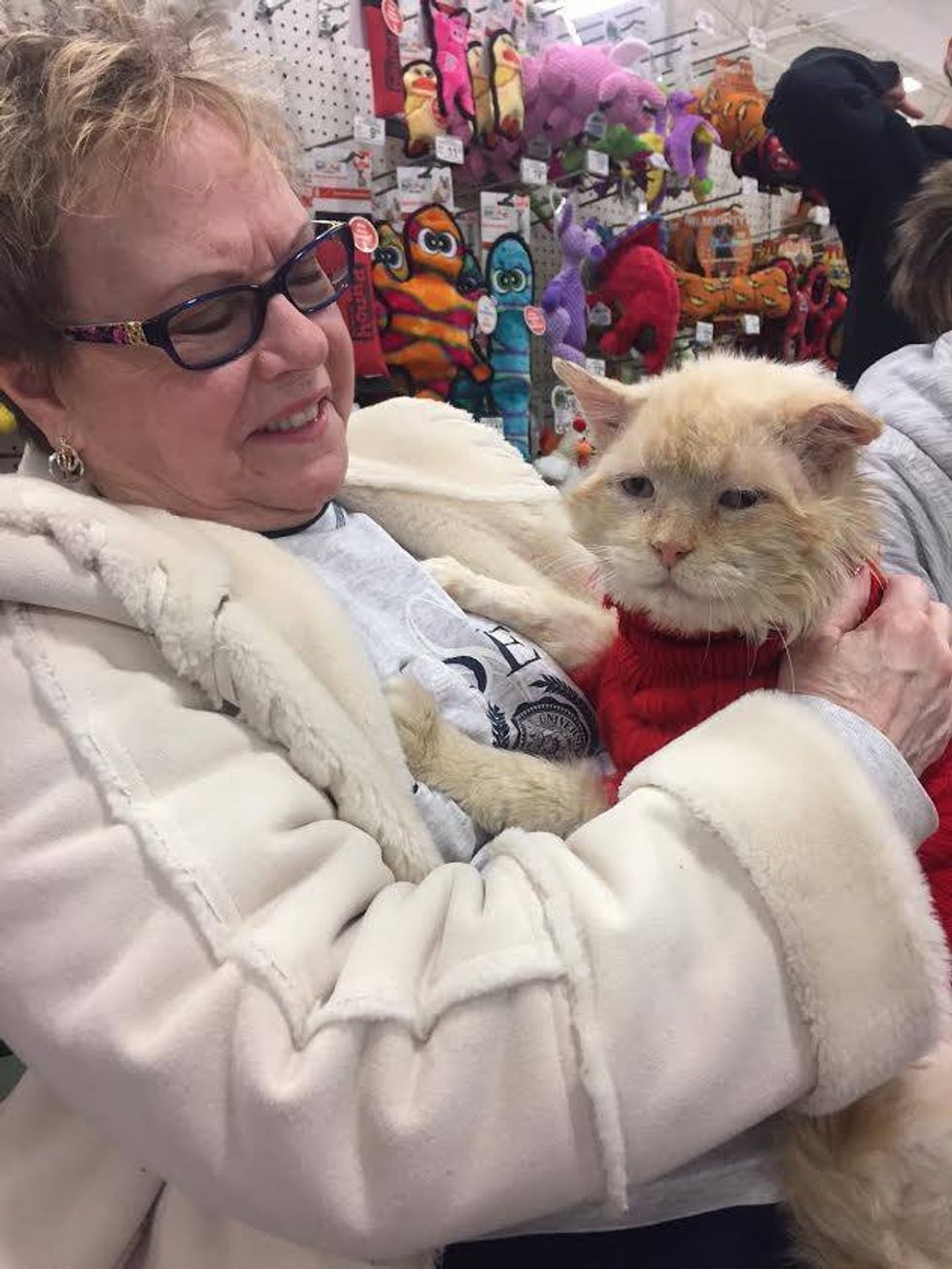 "He has come a long way and is getting all the love and attention he deserves," Nutmeg's mom told Love Meow.

Sweet Nutmeg cuddles with his human mom at his forever loving home! 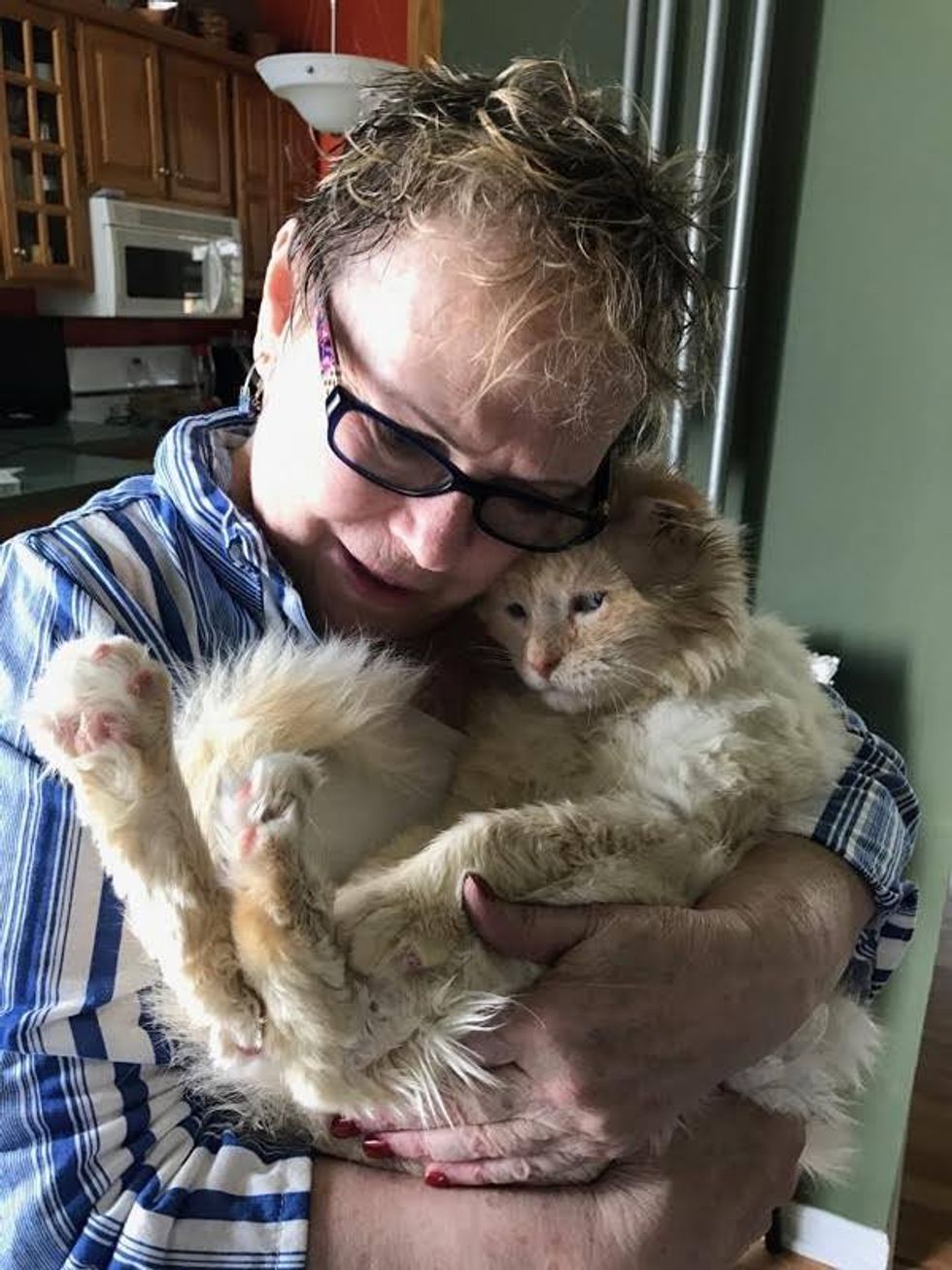 Nutmeg loves his giant bed that he shares with his mom and new brother, Frankie the cat. 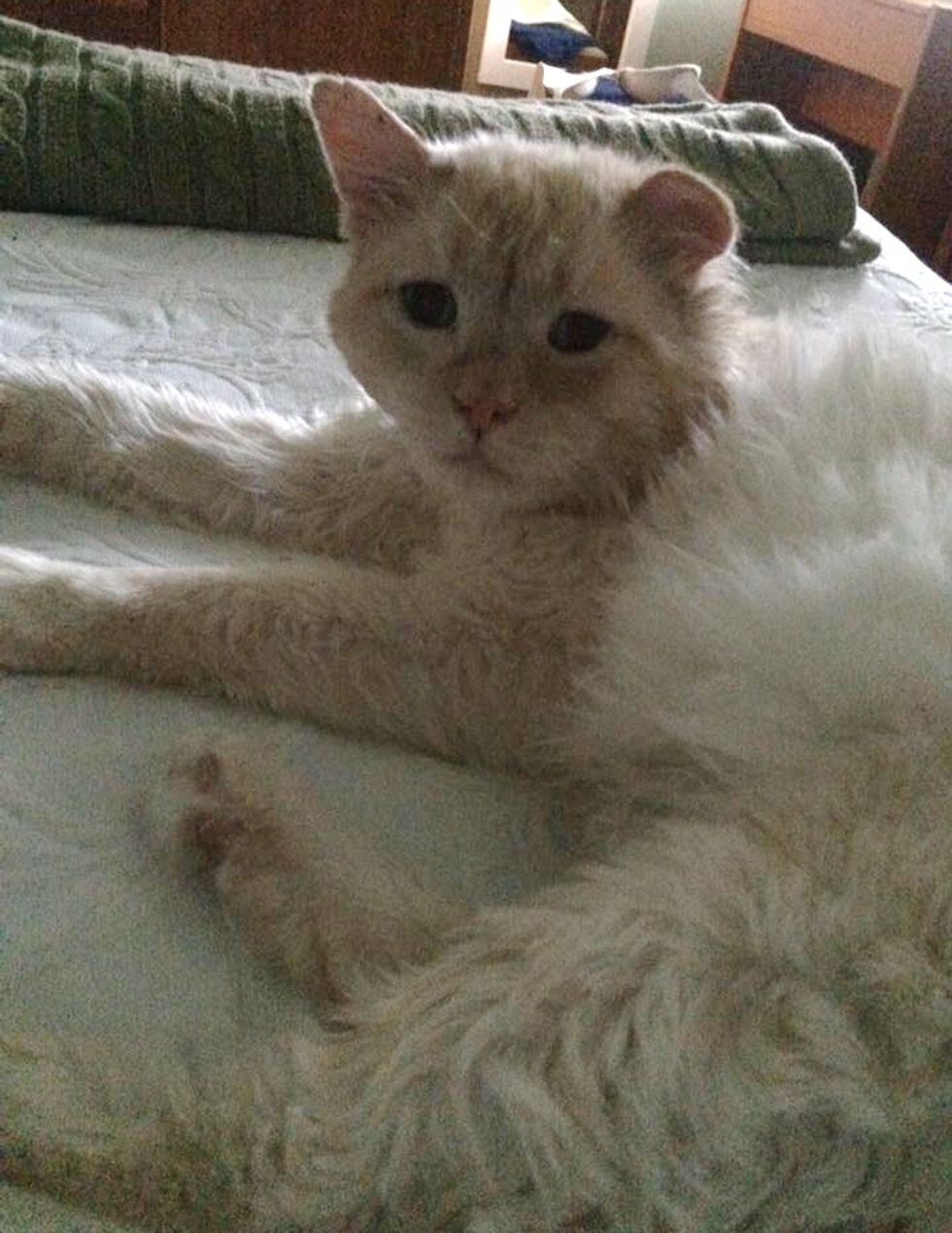 "To have been a part of his journey from day one, a little over two months ago when he was near death, and to see him today with his new mom, is so very rewarding and reminds us of why we do what we do," the rescue group wrote on Facebook.

That frown on his face has faded away and now he can open his eyes wide and is the happiest he can be! 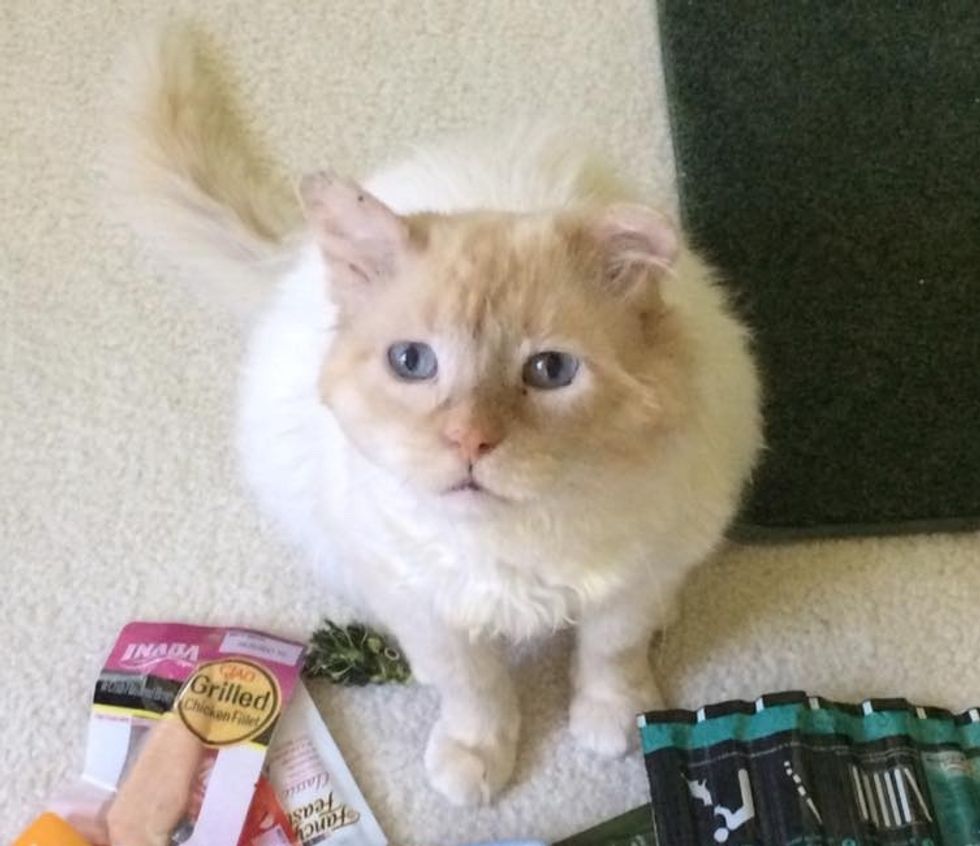