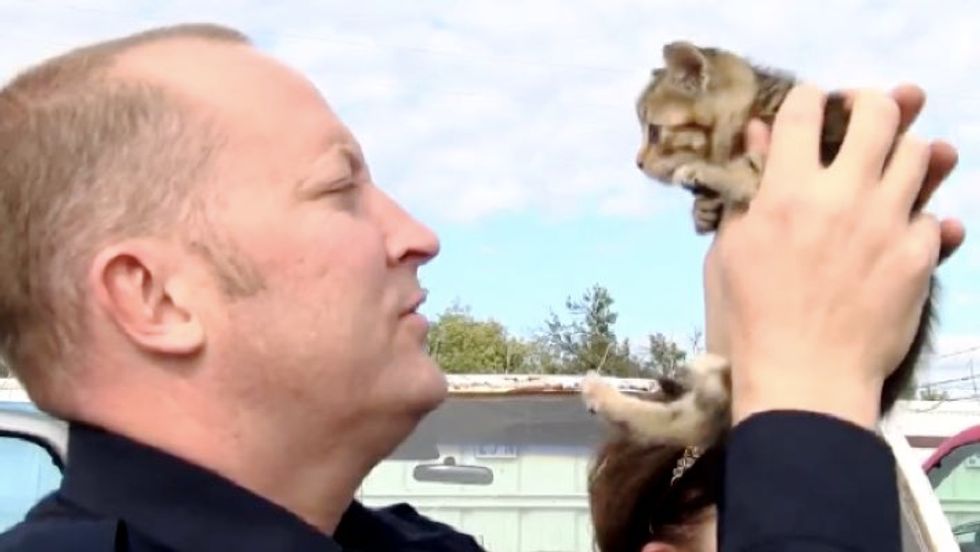 It was quite a surprise, when these two little kittens were found in a truck on an impound lot.

A stray cat snuck into one of the vehicles at the impound and gave birth to a litter of kittens there. When impound supervisor Billy Williams was preparing the cars for the rain last week, he saw the mother cat leap out of the vehicle while he was putting plastic over the windows.

The cat mother hasn’t been seen for several days.

Once the Wichita Falls PD officers found the kittens, they alerted a rescue team to help the kittens find a home.

Emily's Legacy Rescue shares the story on Facebook: "Officer Hughes and Officer Banda were amazing in helping me get to where I could reach the kittens where they were hiding in a tube like plastic container way under the back seat."

"This is Taylor with Officer Hughes after he alerted us that these two kittens needed rescue."

They named the 5 week old kittens Taylor (brown tabby) and Swift (male-gray). They are healthy and now in foster care with Kem Thames Ervin.

Watch the rescue story in this video:

Thanks to Wichita Falls PD, the kittens are safe and sound now.

"This little boy is Swift. He was the first one pulled out from under the seat where they were hiding."

Taylor is almost five weeks old. She is a cutie.

Share this story and help these kitties find their forever home!