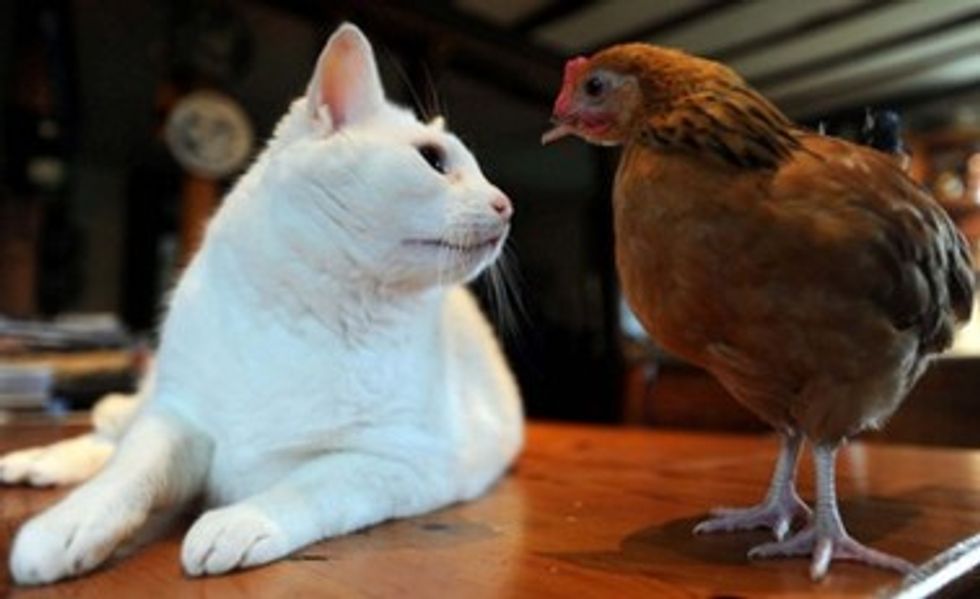 Hiroko lost her three kittens in 2007, but soon after she became a surrogate mother to two ducklings that her owner accidentally left her with. Hiroko immediately began caring for the newly hatched ducklings by grooming them and treating them as if they were her own kittens.

A friendly Macaque monkey and his kitten buddy were spotted in the coastal resort of Kuala Selangor in Malaysia. The monkey was seen patting the kitten on the head. Tourist Kaz Campell who captured the moment spent about two hours with them.

"They were playing together and really seemed to have a special relationship, they adored each other. It was surprising to see the unusual interaction between the two little creatures."

Gladys was the sole survivor of her pen after a fox killed 13 other chickens. Fearing her safety, the farmer relocated her to a farmhouse where Snowy the cat resided. Gladys was lonely and scared, but Snowy was there to provide companionship. Soon they were bonded and became very best friends.

This alpaca has befriended a cat from the farm. They were inseparable.

Pussy the cat befriends Maggy the magpie and Yellow Bird the yellow bird. They may seem to be three unlikely friends, but to them there is nothing unusual in their friendship. Pussy does not know that he is a cat. According to his owner, he has never tried to eat the birds and is not much of a hunter.

At Bandung Zoo in the City of Western Java, a cat befriends a wild buffalo. They are seen hanging out together like two good buddies.

Mausi and Muschi are two unlikely friends at Germany's Berlin Zoo. The female moggy entered the male Asian black bear's enclosure for food about eight years ago. After that they started living, eating and playing together.

A rabbit named Summer adopted a litter of six abandoned kittens that were brought into a veterinary branch in Aberdeen back in 2007. When she met the five-week-old kittens she immediately bonded with them. The kittens instantly thought she was their mom, climbing all over her and looking to get milk from her. Summer "just sat there and let them do it. Now they follow her everywhere. They can't bear to be without her. They're all so lovely together" said Melanie from Aberdeen.

Johann the kitten was found nearly dead when he was only a few weeks old. He had "an upper respiratory infection, severe bilateral eye infection, blind in one eye due to severe ulceration secondary to the infection, chunks of fur missing from a flea infestation, with extremely labored breathing and emaciated to the point of being too weak to eat."

Sobe, the lizard initially "was defensive and territorial and tried to lunge at Johann several times." In the beginning his owner tried to separate them and slowly introduced them to each other and within a couple of days they became best friends.