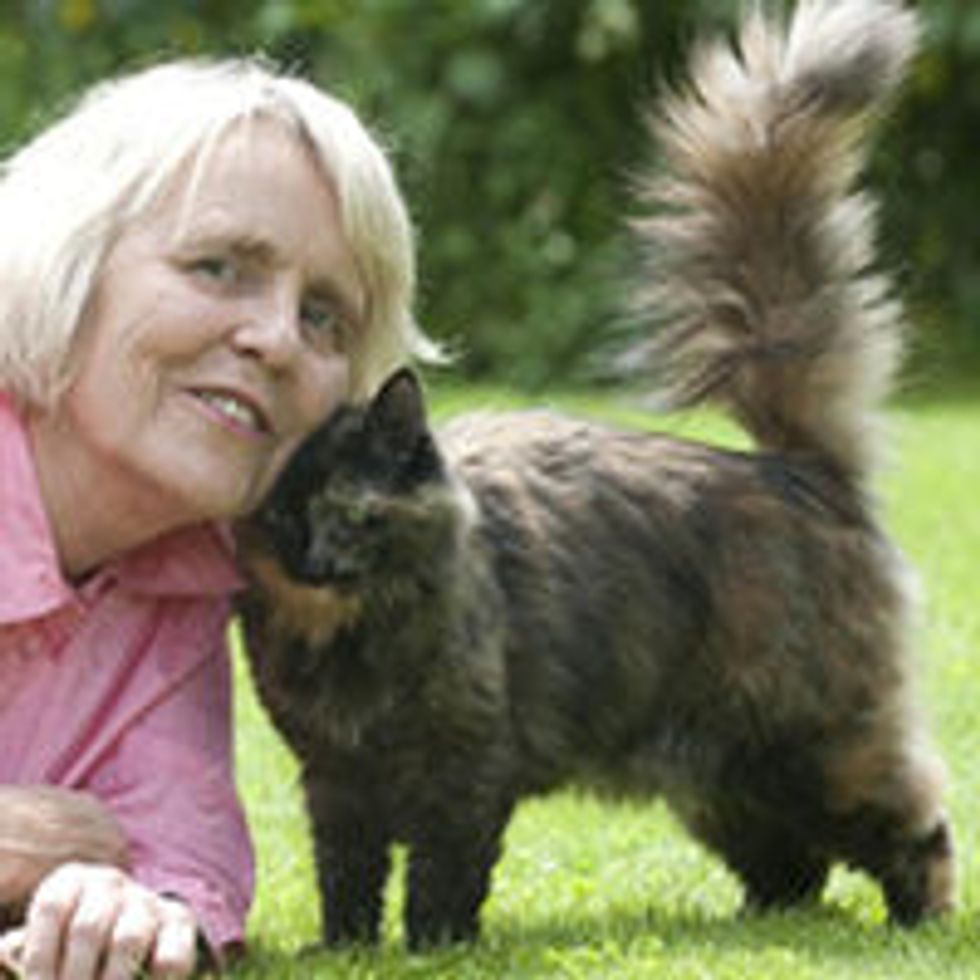 A long haired tortie cat named Tilly was a very feral and scaredy cat. No one wanted her until one day Celia Haddon decided to take her home for rehabilitation.  It was a journey to tame the kitty and gain her trust, but in the end, Celia realized that it was really Tilly the cat who truly rescued her.

Celia Haddon wrote in her book about Tilly:

"I was looking at a very odd-looking cat. Her stringy coat was an unappealing muddy brown and her eyes were a frog-like green. As for her face, it had a distinct line down the nose, separating the right black half from the left tortoiseshell half. She wasn’t just odd-looking, she was also one of the most frightened cats I’d ever come across. The photograph I’d just taken showed her cowering in a cat pen, her ears flat on her skull and her eyes dilated with terror. Her hair stood out in spikes, like a cartoon cat.

Little wonder that no one had wanted to adopt Tilly in the 18 months she’d been with my local branch of Cats Protection, where - as a lifelong cat-lover, I had been a volunteer for several years. Like a bed-blocker in a hospital, Tilly had been taking up space for too long - indeed, some rescue organisations would have had her put down. So, in June 2010, I decided to make her my project. I’d just finished a science degree in applied animal behaviour and was keen to practise my new skills. I doubted I’d learn to love such an unlovable cat - but I was keen to work on her behaviour in a detached, scientific way."

Once she got Tilly home, the tortie cat immediately took refuge under the bed and froze against the wall. She didn't touch her food for the next two days.

"Maybe the poor little thing was feral. All I knew was she’d been rescued aged four months, sick and flea-infested, from a barn where she lived with numerous other cats. On day four, I lay on my stomach and peered under the bed: she was still crouched motionless. Rolling a few cat treats towards her just made her shrink more tightly against the wall. The following day, the treats were still there. In her mind, they’d been contaminated by the touch of this frightening human. It was time to change tack: I decided to stop all attempts to build a relationship. I didn’t look at her. I didn’t try to make nice little noises. I didn’t roll any more cat treats. Thus began a long time of cat invisibility."

"A week or two later, we began to notice that shredded pieces of newspaper were appearing in different rooms, and wastebins were being overturned. A few nights later, I woke with a start at 3am, with a powerful and unpleasant feeling of being watched. It was like a horror movie when the eerie music plays.

So I left little balls of newspaper around to see if they’d attract her interest. When I found them in the morning, they would be in a different area of the room. She’d been playing! This frightened and lonely cat was enjoying herself, albeit at a time when no humans were awake."

More than 2 months after Tilly settled down in her new home, she still remained semi-visible.  "If I so much as glanced at her, she responded with terror. I was on the edge of giving up."

"Then it happened: the moment that changed everything. I was again in bed reading when she suddenly appeared 6ft away. But this time, she rolled over on to her side. She was performing what cat scientists call ‘the social roll’ - a signal to come and play. I didn’t dare get up or move towards her, and she soon walked away. However, I had a glimmer of hope."

Celia went on with Tilly's rehab with treats. Though the mere movements of her arms was still frightening to Tilly, she was slowly making progress. "To make myself seem less threatening, I decided to lie down on the floor and roll the treats towards her. That didn’t work either. I was 66 years old, so getting down to floor level took too long. By the time I was flat on the carpet, she’d run off."

Finally, she figured out a way that would work. "Every time I saw her, I’d immediately retrace my steps and go the other way. If I had to pass her, I’d turn my back on her, thus avoiding all eye contact. Soon, because she didn’t feel as threatened, the little brown cat no longer ran away quite so far or so fast. Her eyes were still huge with fear and she was still spending about half the day under the bed, but she was able to sit and watch me at what she felt was a safe distance. And this safe distance was getting smaller every week. Finally, one day, as I lay on the floor, she took food from my hand. Her body language changed, too: she no longer slunk round the house with her stomach close to the floor. And I even found her sleeping on, rather than under, the bed. Then there was another break-through. I was sitting on the sofa watching TV when she suddenly jumped up beside me. Without thinking, I started to stroke her. As she began purring loudly, I thought: ‘I really love her.’ From that moment on, there was no more talk of putting her up for adoption."

During the entire rehab period, Celia's husband Ronnie was going through cancer treatments, then one day, they received bad news that his leg ulcer would not heal. At the same time, Celia discovered that she had a 5 cm tumor  from her routine mammogram, and it needed to be removed surgically. During the next 28 days, they were in and out of the hospital for doctor's appointments. "Tilly sensed the change in me and became particularly loving, rubbing her face against mine. But in the distress and frenzy of those days, it was her wordlessness that was the greatest comfort."

"Tilly didn’t tell me to ‘be positive’, as many people did. She did not say to me, as a surprising number of people did: ‘I know someone who died from breast cancer.’ She didn’t tell me to eat a vegan diet, abstain from dairy foods or take various infallible anti-cancer alternative remedies. Nor did she tell me, as some people did, that by failing to do these things I’d given myself cancer. She just purred and gave me affection. Once, as I watched her wash herself, a wave of happiness came over me: I couldn’t cure Ronnie or myself, but I had cured Tilly. Finally - after organising a carer for them both - I went into hospital for a mastectomy. I was lucky: I didn’t need radiotherapy or chemo. As I came round, it helped to know that a cat would be waiting for me at home. Not beautiful. Not graceful. But with a loving heart."

"At 5am, in total despair, I wrapped myself in a blanket and sat in the living room, trying to calm myself down. It was then that a small miracle occurred. Tilly, of her own accord, jumped on my knees and curled up to sleep in my lap. For a whole hour, she lay in a small warm ball. I could feel despair ebb away. From that moment, I vowed to look after myself, so I could help Ronnie enjoy the rest of his life. Sitting in the dark with Tilly, I was infused with calm determination - and that feeling has lasted. I may have rescued the craziest cat in Oxfordshire, but there’s no doubt in my mind that she’s also rescued me."

Celia shares her story with Tilly in her book.