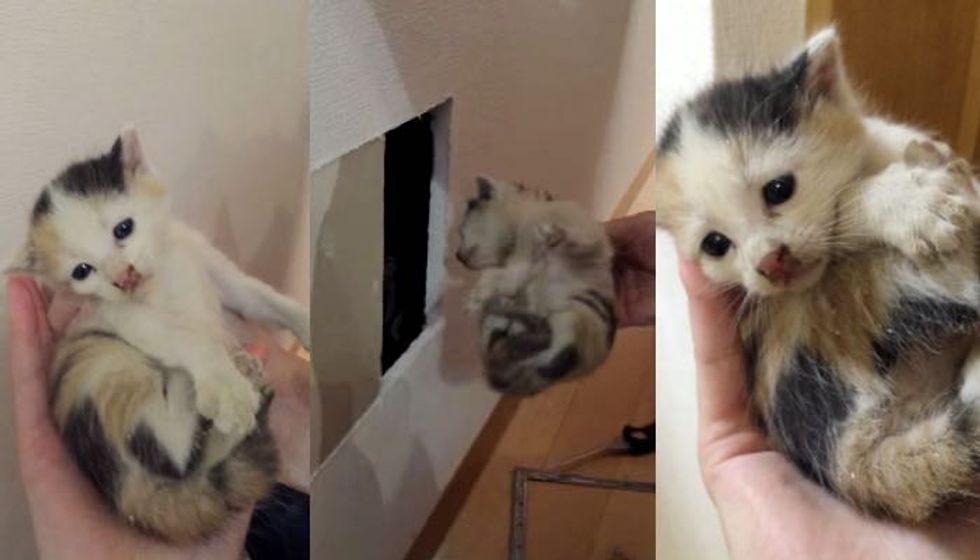 Woman Hears a Kitten Inside a Wall, Spends Hours Searching and Finds this..

A tiny kitten found herself trapped inside a wall for at least 10 hours. The home owner wouldn't give up finding the kitten and even cut a hole in the wall so she could save her.

On September 14, 2015, the home owner first heard a kitten meowing early in the morning and thought it was just an outside cat. But somehow the meow continued so she began to look for the cat.

The kitten cried for a while then stopped but cried again hours later. The home owner wasn't able to find the cat and was very worried so she called a carpenter for help. It was around evening when they finally located the kitten behind a wall.

With the carpenter's help, they cut a hole in the wall and were able to retrieve the little calico safely.

No one knew exactly how the kitten ended up there, but they were so relieved to know that the kitten was going to be alright.

They gave the kitten a very needed bath.

She had her first bottle. Eating like a champ!

2 weeks after the rescue, her ears perked up and she was quite a talker!

She bonded with the resident cats.

All grown up now! She's come a long way!