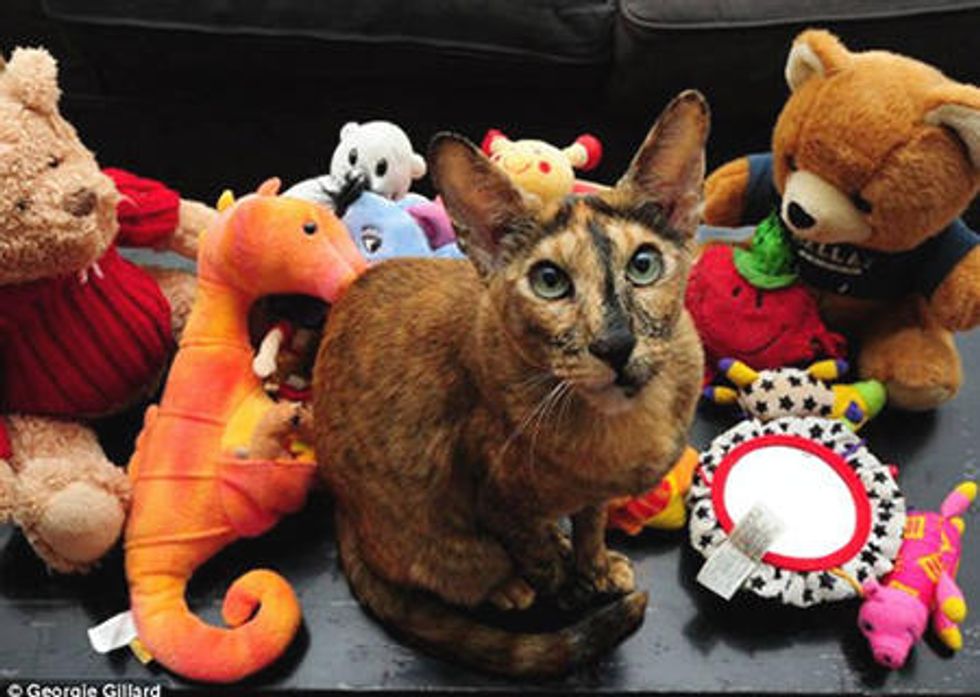 Zaza The Klepto Cat Steals 17 Toys From The Neighbors'

Zaza, a five year old tortie oriental cat, has been bringing cuddly toys from the neighbors' to her humans. So far this klepto cat has snatched 17 soft toys in a month.

Daisy Ayliffee, Zaza's human, initially thought she had an intruder coming into her home and dropping off teddy bears outside her bedroom door until one day she caught Zaza carrying a soft giant doughnut through the cat flap.

They don't know for sure where the toys are coming from. Zaza is especially drawn to teddy bears. "It obviously has some sort of fetish, the nylon, synthetic material must somehow appeal to her." (Daily Mail)

"She used to leave them outside the bedroom door for us, it was really funny. I came home one day and there were three massive teddy bears in the house."

Before seeing Zaza in action, Daisy wasn't convinced and thought the cat wouldn't be bringing in massive teddy bears. "Then at the moment the cat came through the cat flap with a giant doughnut. I thought, this is really weird. Then another day I thought she had caught a mouse as something was squeaking but then I realized it was a squeaking teddy bear and it has just gone on from there."

Daisy woke up one day and found an Eeyore bear in her bed. Another weekend, while they were having dinner, a big brown bear fell on their dining table. "It's sweet the way she offered them as gifts."

The couple have now relocated to a new area where there is a walled garden, so the cat's burgling habit has been stopped. However, in the first week after they moved in, the little boy from upstairs lost his teddy bear as it had fallen from the window. It didn't take long for Zaza to find it and bring it to her humans.

Zaza the klepto cat has brought home 17 toys she took from her neighbors.

She is especially drawn to teddy bears, and would drop them off outside her humans bedroom as gifts.

Initially they thought they had an intruder coming into their home until one day they saw Zaza in action carrying a giant doughnut.

Zaza has her interesting ways of offering gifts to her humans. One time she dropped a giant teddy bear on the table while her humans were having dinner.

Now, they have moved to a new place where Zaza can no longer practice her klepto habit, but it doesn't stop her from picking up little toys that fall from the upstair neighbors. She'd bring them to her humans with pride.