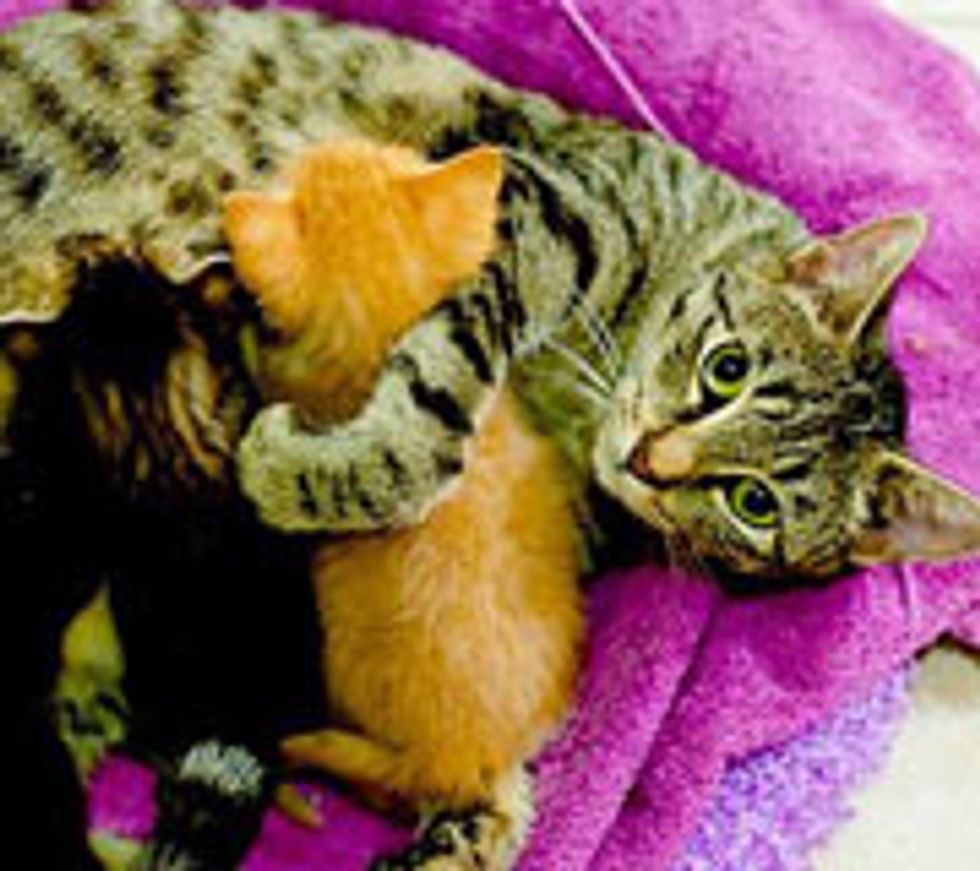 This mama cat adopted an orphaned ginger name Charlie. "she went to work right away on cleaning and nursing him. She is the one we took from outside with her babies," says Stacey. Full story here.

Lizzy, a rescue cat mama gave birth to four kittens of her own. When the volunteers brought in five orphaned kitties, she took to them and nursed and groomed them as if they were her own babies. Full story and more photos.

Zoraline was found with an injured leg and a big belly. She went through quite a lot before she and her kitten Ziggy were rescued and taken to a foster home. Zoraline was a wonderful cat mama who gave her kitten every ounce of attention and love. Full story and more photos.

Sunshine had been hanging around at an apartment complex. She was thin and very pregnant. The beautiful ginger cat was taken to a veternary clinic where they found her a foster home. She gave birth to five gorgeous little munchkins. Full story and more photos.

Glenda and her kittens were given a second chance. She was a caring and loving mama cat not only to her own kittens but also to three other adopted kittens who didn't have a mother. Glenda treated them like her own. Full story and more photos.

Three newborn bobcat kittens were found in the woods of Alabama, but they were given a second chance by a black and white house cat named Bobbi. Full story.

Maggie a loving tabby cat was found very pregnant. She gave birth to six fuzzballs at her foster home. Raising six babies is hard work, but Maggie never complains and is there every step of the way for her kittens. Full story and more photos.

This mama cat was found by the SOS Animals, a rescue group from Lithuania. It's heart warming to see how much love a mama cat has for her kittens. Full story and more photos.

This beautiful cat gave birth to 4 lovely furballs in the shelter. She is a wonderful mama cat who did everything she could to keep her babies happy and healthy. Full story.

Ally a rescue mama cat is looking after five tiny kittens that she just gave birth to. She is hoping to find a good home when her kittens are old enough for adoption. Full story and more photos.

Rose and her two kittens were found soon after she gave birth. They were given a second chance at life and most importantly their forever loving homes. Full story and photos.

Lovisa a wonderful rescue mama cat has unconditional love for her kittens. Even though she is eating, she doesn't mind nursing at the same time. Full story and more photos.