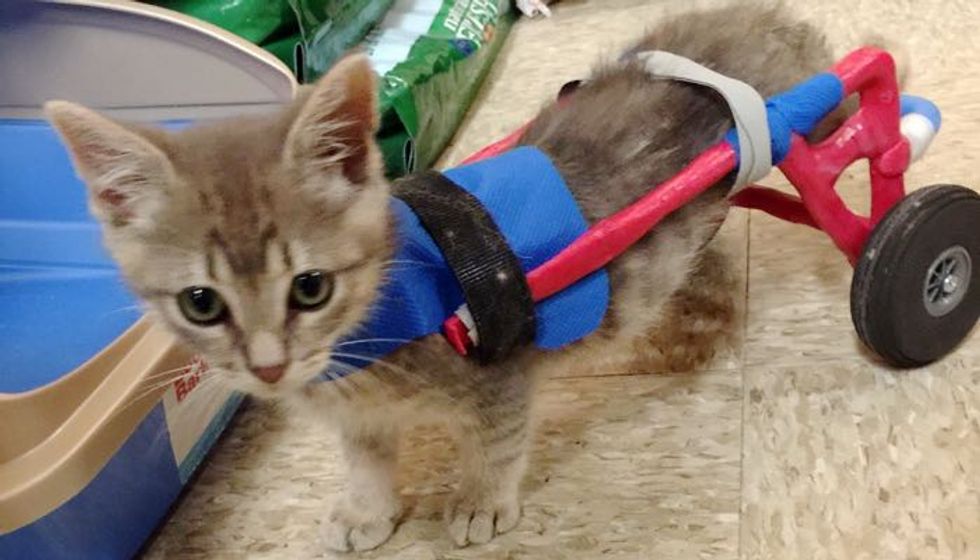 Clark the Superkitty on Wheels

Clark Kent is a super kitty who walks and runs on a set of wheels. He doesn't think he has any limitations. This kitty is too busy playing like any other kitten.

"Clark is a paraplegic kitten who was taken in by TAAG (Transylvania Animal Alliance Group), a group I volunteer with. He was taken in at four weeks old and cannot use his back legs. To prevent spinal damage, his awesome foster mom made him his first chair and has been making them ever since," said Laura, a volunteer of TAAG, via reddit.

"Clark has a very good bill of health other than his legs, and will likely live a happy life in a cart. He will likely need a surgery later on but for now he is scooting all over town fast as he can playing like all kittens!

He doesn't think he has any limitations at all and never lets his mobility issues stop him. The only thing he can't do is climb but he still tries! To us he truly is Superkitty!" Follow TAAG on Facebook.

Clark is now in his fourth cart. "He normally has Superman emblems on his chair but they haven't been put on this new chair yet."

"His foster mom keeps making bigger carts for him as he grows and he gets around well... His chair gets adjusted to help him use his muscles so they don't atrophy. His prognosis is great other than all that and he's in good health, just will be a two legged kitty one day!"

"Clark doesn't care a bit about having limitations, he really doesn't. I've seen him come to adoption day and he acts like any other kitten. He chases the others and plays just the same. He likes to follow his foster mom through the aisles and see all the other animals.

I've not seen him act a bit afraid and we would never bring him if he was not okay. He handles it better than a lot of our four legged kitties actually... he's always playing and interested in every little thing he sees."

"He's got all the heart and all the love of life of any other kitten and he can play with the best of them."

Watch: Clark playing and even chasing his tail!

Isn't he a super cat? Share this story and help Clark with his journey to a healthy and happy life.