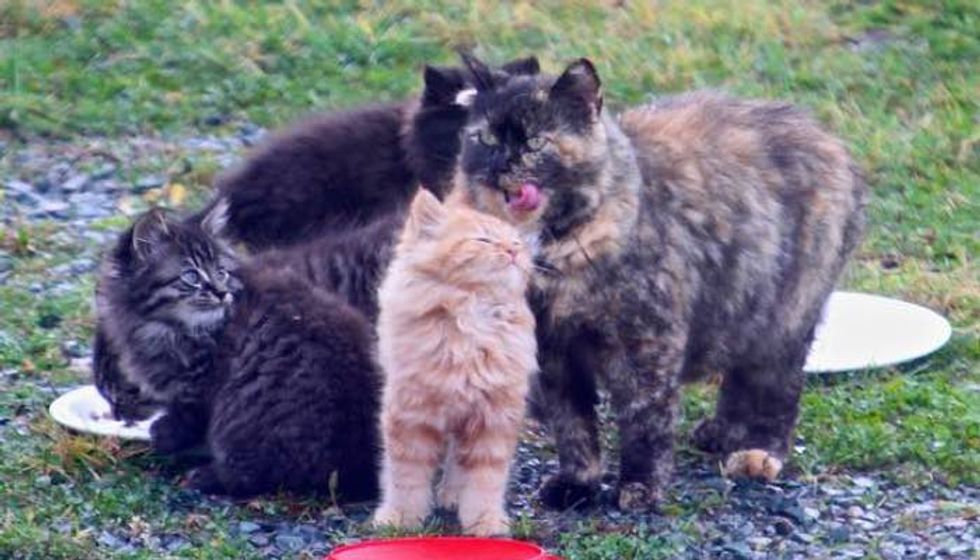 A feral mama cat and her four kittens were spotted at an old barn by a kind man. He and his family started feeding the cats and trying to socialize them. It took them over two months before the kittens showed a sign of trust and allowed the humans to touch them for the first time.

"Rescued four feral kittens from an old barn. Took a long time to socialize them but worth every minute," said reddit user calio88.

Every time they fed the kitties, they moved the feeding dish a bit closer to their house until they reached the back porch. Then one day, they closed the door and the kittens had successfully moved in!

Feral kittens and their Mama on the first day they found them.

They started feeding them every day. It took over 2 months before the kittens trusted them enough to touch and handle them.

They trapped the mama cat and had her spayed and returned to the barn and continue to feed her every day.

They moved the feeding dish closer to their house and then the back porch.

"Mama is always around the house and property. She's at the front door every morning and evening for meals. The kittens have seen her many times. This is Dolly seeing her mom outside during the winter," he said. (reddit)

Pip Kitty has grown into a little lion cat!

"Mama is truly feral and would be very difficult to socialize. I am able to touch Mama now when I feed her so maybe there is hope. Takes a lot of time and patience but she's doing good and is happy and well fed," he added.

Have you rescued a stray or feral? Share this story and adopt a cat!

Orphaned Kitten Walked Up to Woman and Curled Up in Her Hands Begging for Love, Now Almost a Year Later...