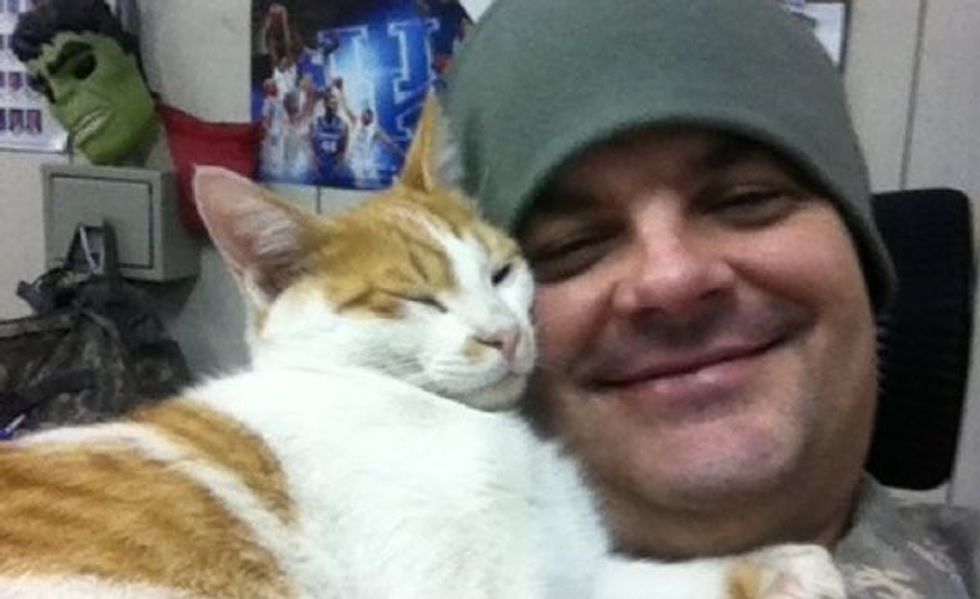 Kentucky Soldier Giving Kuwaiti Cat a New Home in the US

A cat from Kuwait has bonded with a Kentucky soldier, Sergeant Daryl Casey, and given him a sense of home during his deployment.

"When we first got here, we were just getting settled in and there was a mama cat who was kind of hanging around our area. Not too long after we got in and got settled in, she had kittens," said Sgt. Casey who works on helicopters at Camp Buehring in Kuwait.

One of these kittens touched Daryl's heart. His name is Stanley.

"One of the particular little kittens, he and I just kind of bonded. He's seen me coming in and he'd come running up to me and rub against my legs. I'd sit down and he'd jump in my lap. When everybody sees him walking around, they go 'Hey there's Daryl's cat!' They always say, 'Hey are you looking for your daddy? He's right over there!'," he said.

Stanley has always been there to keep him company when he feels homesick.

"Christmas and Thanksgiving were, for me, really tough. Those are big family gatherings and I was sitting at work feeling kind of blue and somebody opens the door and here comes Stanley into the office. He kind of looks at me and jumps up in my lap. You can kind of see from those pictures he just kind of lays up beside me like 'Hey man, it's going to be ok. I'm here'," Sgt. Casey said.

"We had some catnip mice that people had sent and those cats went crazy for that!" he said.

Sgt. Casey will soon be returning to Kentucky and he couldn't stand the thought of leaving Stanley behind. He reached out for help from Nowzad, a rescue group that has helped troops get the animals they adopted from Afghanistan to their home countries.

"Getting home will be an absolutely joyful event but just to see that little cat's smiling face when I come in the house, that's just going to be something. I can't wait for it," Sgt. Casey said.

"People say you're saving this cat's life and I'm like, well, in a way he's kind of saved me just by being there for me," Sgt. Casey said.

"People say you're saving this cat's life and I'm like, well, in a way he's kind of saved me just by being there for me."