Kitten Found on Hot Asphalt, Beat the Odds When No One Knew He Would Survive

Two months ago, on a sweltering summer day, a Good Samaritan from Queens, New York, spotted a tiny kitten still with his umbilical cord attached.

His skin was burned from the hot asphalt and the sun, but the kitten, who was just a few days old, had the heart of a warrior. 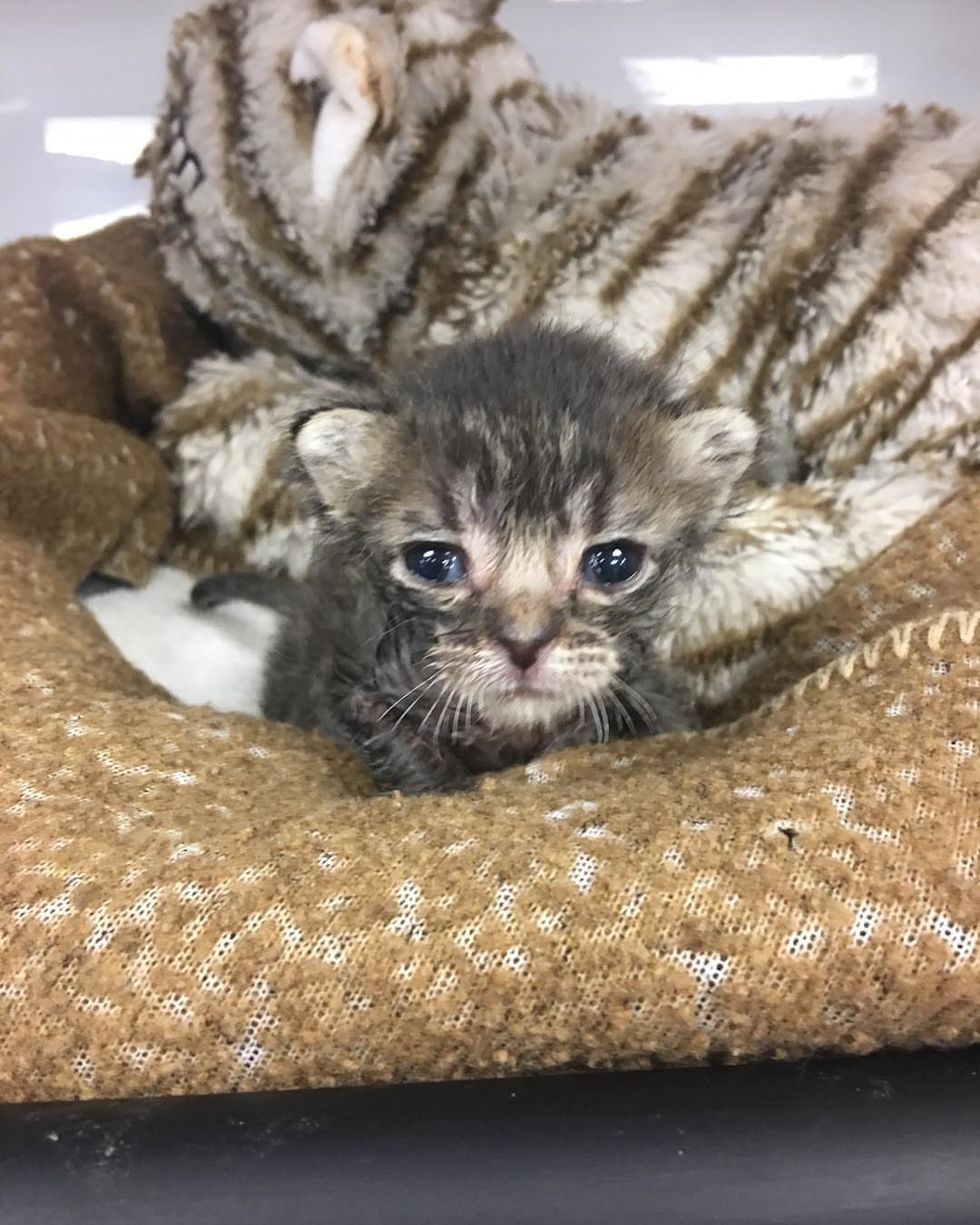 The kitten named Cheetoh had been left behind by his mother for quite some time before he was found. "He had a wound on his back leg that was full of maggots. The Good Samaritan that picked him up from the street, delivered him to me at my office," Joanne Leotta told Love Meow.

Joanne immediately started bottle feeding the kitten KMR (Kitten Milk Replacer) and Pedialyte. It brought the frail little baby back from the brink.

Cheetoh was still very weak due to the wound and being so tiny. Joanne reached out to Beth Stern, who suggested bringing him to the Long Island Veterinary Specialists to receive the medical attention he needed for his survival. 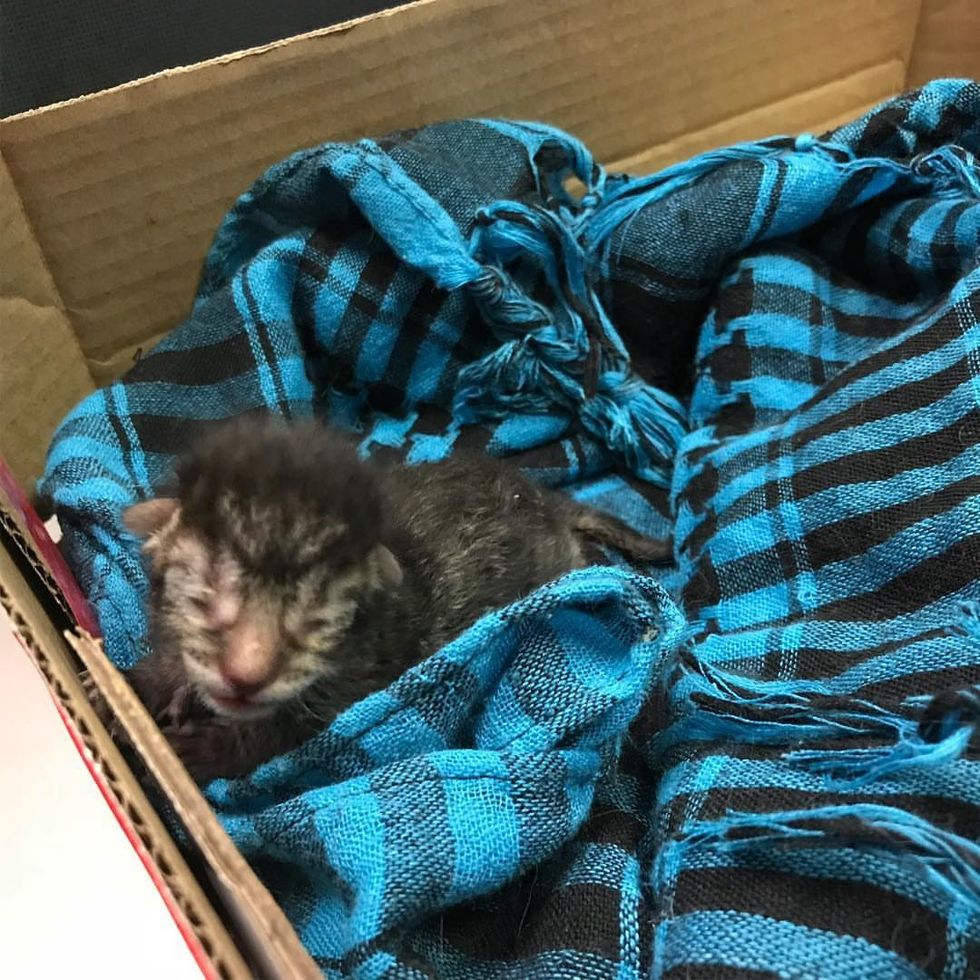 "The first few weeks there he was not improving despite the intensive care he was receiving. We didn't think he was going to make it," Joanne said.

Cheetoh continued to fight and never ceased to amaze the staff with his will to live. "He was very feisty and alert." 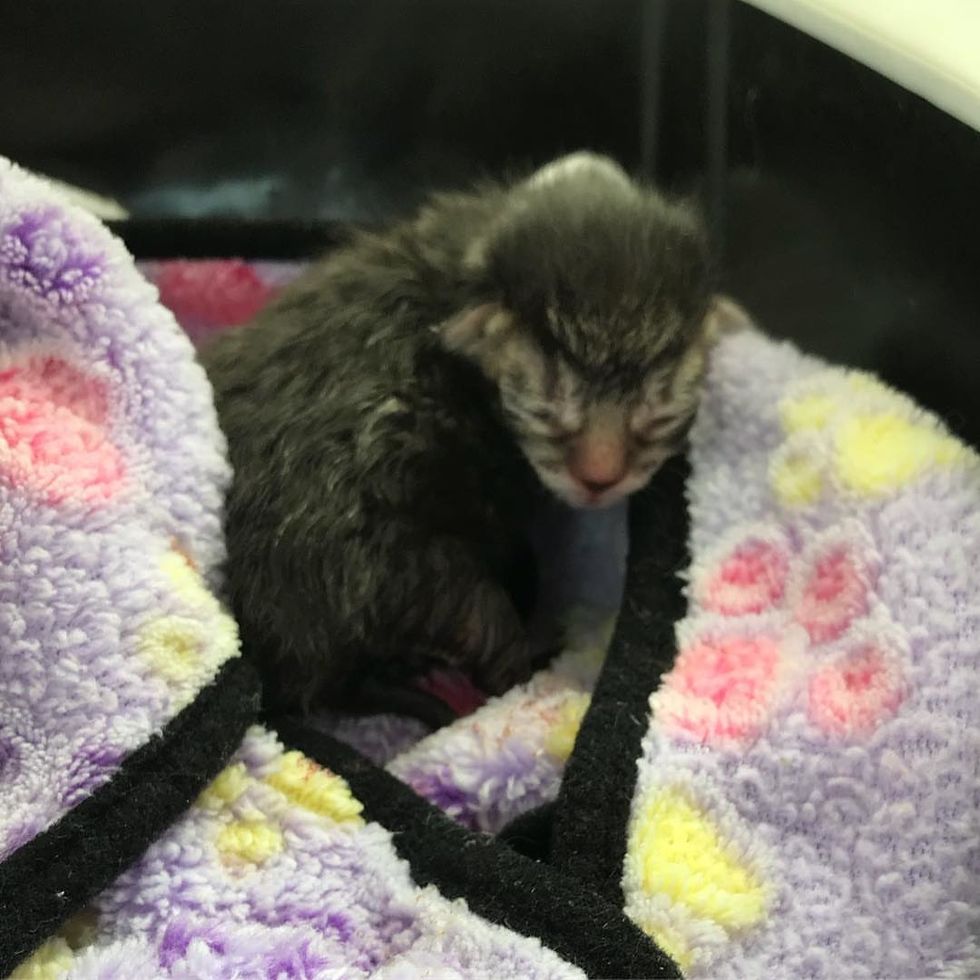 Watch video of Cheetoh when he was rescued:

The veterinary team was fighting alongside the kitten. After seven long weeks, Cheetoh defied the odds and recovered from a bad respiratory infection, diarrhea, dehydration and the messy wound.

"Finally, after what seemed like an eternity, seven weeks later he was strong enough to leave the hospital," Joanne told Love Meow. 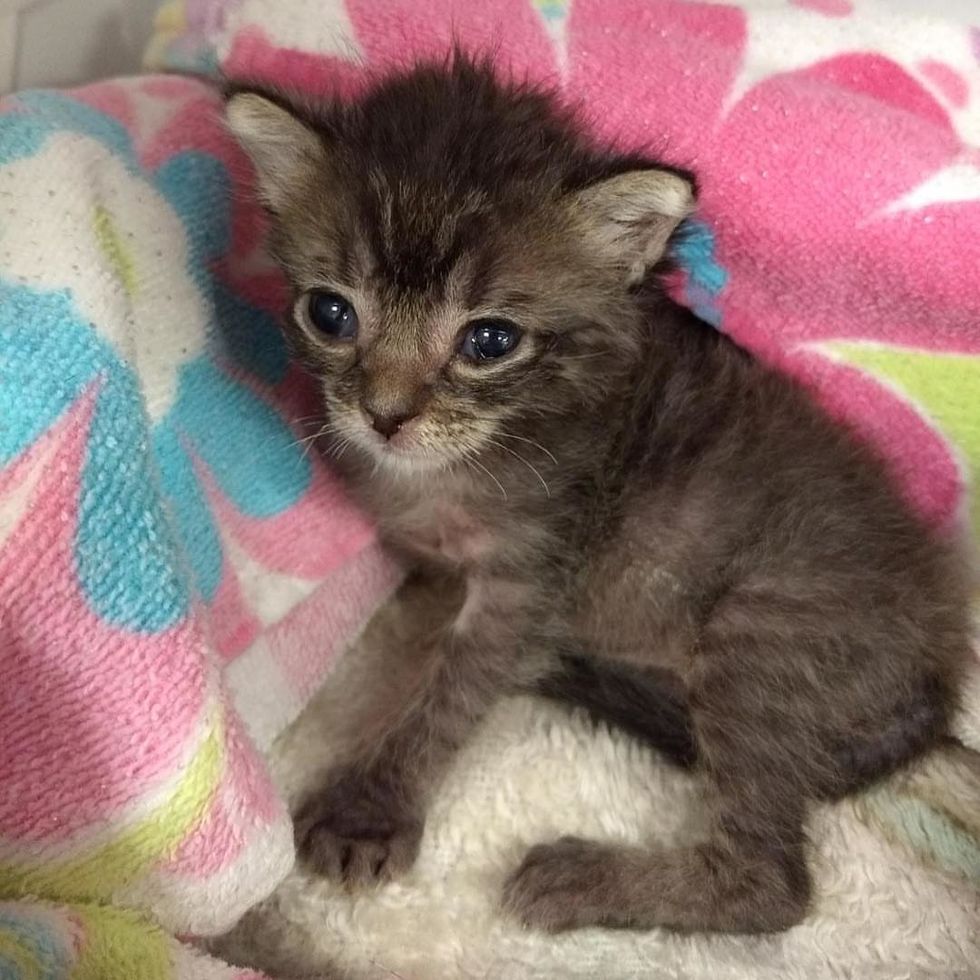 Beth offered to foster the kitten so he could be socialized before finding a place to call his own. Little Cheetoh was just one pound when he arrived at her home.

Despite a rough start to life, the tabby boy was full of affection. He was an instant cuddle-bug with everyone he came across. 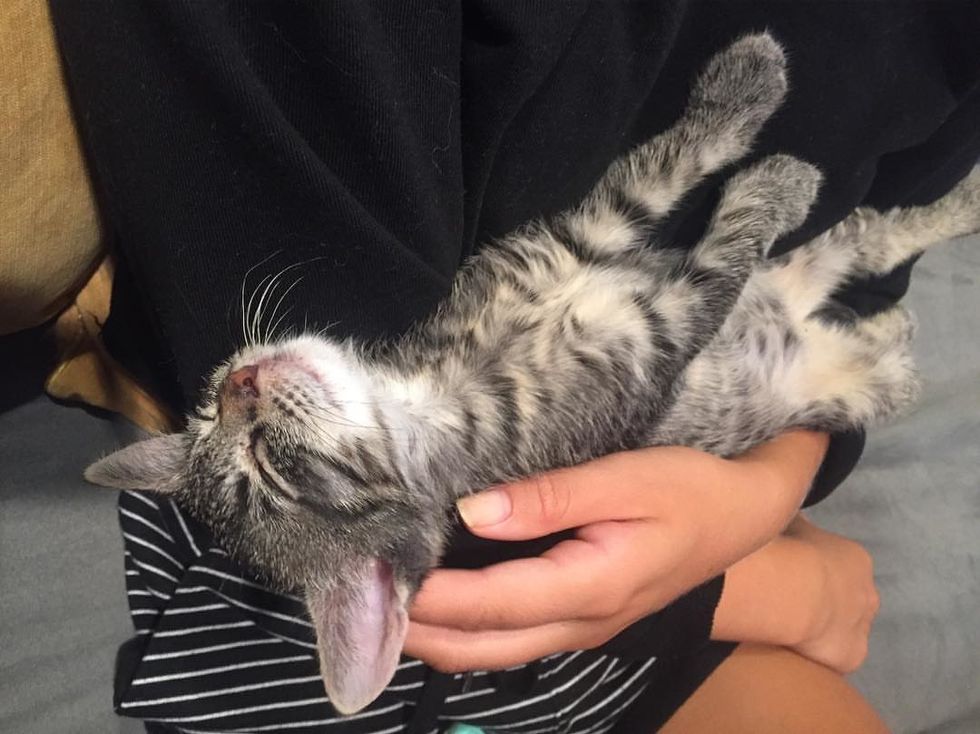 Cheetoh loved to curl up in their arms or laps and would fall asleep while being held. All he wanted was someone to snuggle with.

"Look how amazing little Cheetoh looks thanks to the Stern's and the wonderful staff at LIVS who never gave up on him," Joanne said. 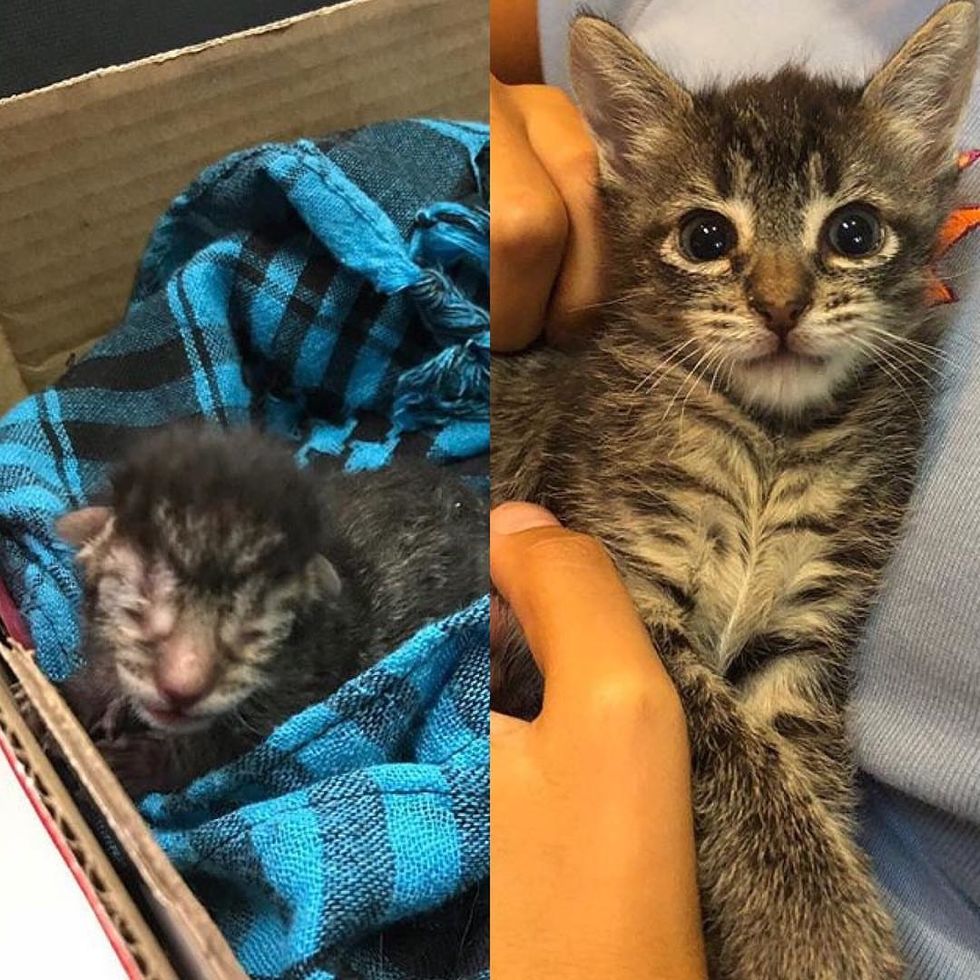 A couple of weeks later, Cheetoh was ready for his next chapter in life.

The little warrior kitty fought against the odds when no one expected that he would pull through.

Tomorrow, Cheetoh will be heading to his forever home where he will be loved and cherished. "It takes a village to save a life sometimes, but it's so worth it!"

Related story: Man Refused to Give Up on Kitten When No One Knew If She Would Survive