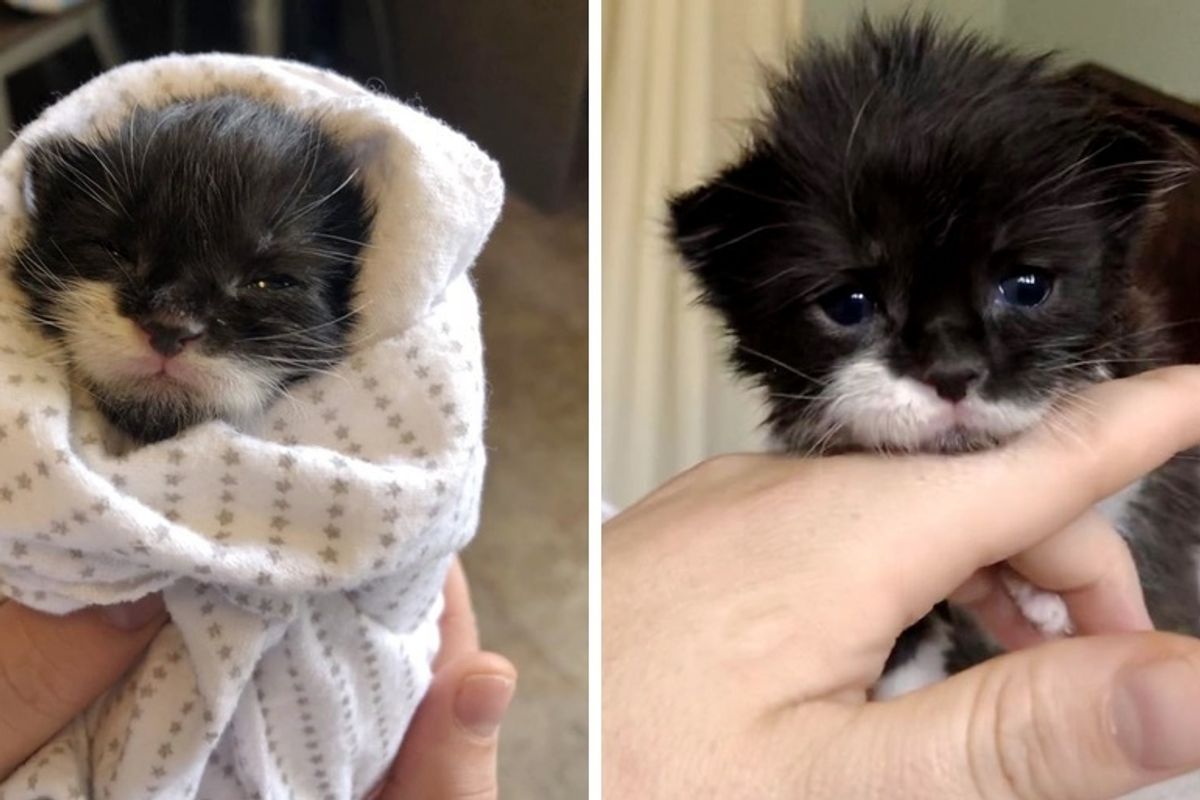 Kitten Found Crying Near Drive-through on Stormy Day, Finds Love from Another Cat and Kitten

A woman from Queen Creek, Arizona was going through a drive-through at a Burger King when she heard a kitten crying.

She spotted a tiny black and white kitten on the road. The weather was stormy, so she got out of her car, scooped him up and drove home. Later, she posted a plea on a Facebook group, asking for help.

Melissa Miyamura from All About Animals Rescue got in touch with her, and Christy Baxter from Newborn Kitten Rescue arranged transport to get the kitty to Jin's Bottle Babies (in Phoenix, AZ).

It took a village to save the kitten, who finally settled into his foster home after the ordeal. He was a little underweight, smelly, had fleas and some scabs. After a much-needed bath and a good meal, he fell asleep in his warm, comfy bed with a full belly.

"He was in overall good condition for being a neonate living outside in stormy weather. It's likely that the cat mom was moving him and maybe some siblings," Shelbi Uyehara, founder of Jin's Bottle Babies, told Love Meow.

The kitten, whom they named Whopper (Jr.), was constantly crying and didn't want to be alone. Nitro, the resident cat, heard his screams and came to offer some tender loving care.

She stepped in and started grooming him and caring for him like a mother would. Not only did she calm him down, but the kitten perked up and started to purr.

"It was a bit of a turning point. He really calmed down and accepted indoor life after that," Shelbi said. "He's forever purring away. I think he likes it here now."

Just like the little tuxedo, Nitro was also rescued as a kitten and nursed back to health. "She loves the bottle babies. We joke that she's a mentor for them since she went through the program herself."

With help from Mama Nitro, Whopper was feeling much better and purring nonstop. In two days, he put on 50 grams and even began to learn to walk.

They had another bottle kitten named Poppy, and decided to introduce them. The two kitties quickly hit it off and started playing and snuggling. With a friend around, Whopper began to thrive.

Watch the kitty's journey in this video:

Kitten found on drive-through gets a second chance at life youtu.be

"Whopper is happy, healthy, and no longer has fleas. He's super cute and sweet and purrs all the time," Shelbi told Love Meow.

Rescuers are working to get the location of the Burger King, in hopes of finding the cat mom and any remaining siblings.

"As we enter kitten season, it's important people do not act in haste and spend some time looking for the cat mom."

The sweet kitty is around four weeks old, loving his new life and everyone around him. He will find a wonderful forever home when he's ready.

"It was really awesome to see that kind of team work to get a kitten safe. It's going to take this level of community collaborating this kitten season, and I was so happy to see it happen with Whopper," Shelbi said.