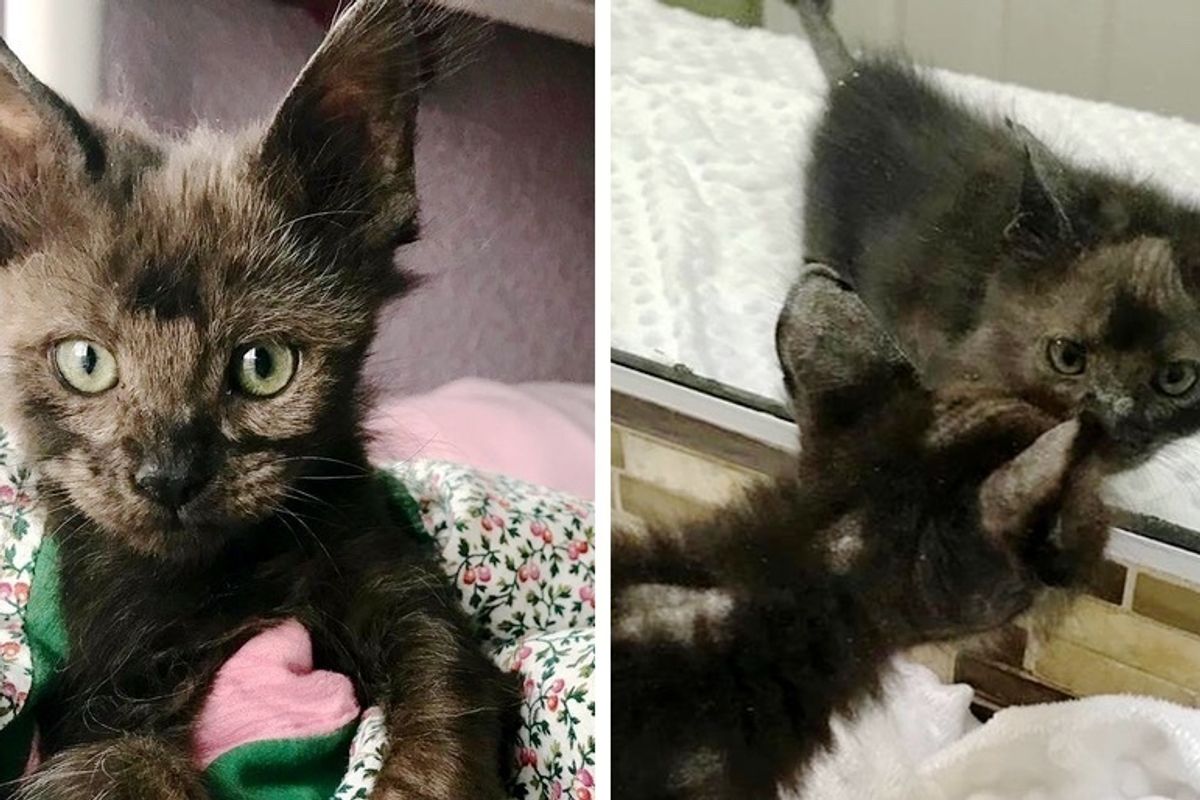 A kitten was found outside huddled in a backyard, covered in dirt and debris. She was just three weeks old.

A Good Samaritan spotted a litter of kittens in his backyard and took them to a shelter to get help. He offered to foster them but soon realized that the kittens were in much worse shape than he had anticipated. Only the little black kitten survived but she developed a severe case of ringworm.

The shelter provided medication and shampoo to treat the kitten but she continued to decline. They immediately put her on the rescue transfer list for a more experienced foster to help her. That's when Hearts Alive Village, a rescue in Las Vegas, took her in.

"I went to pick her up at the shelter, not knowing how bad she was, just that she was five weeks old," Ellen Richter, a foster volunteer of the rescue, told Love Meow. "The staff had written 'worst ringworm ever seen' on the note I received. It only made me want to get her quickly to safety."

Kai was emaciated and covered in dry flakes and a dusting of tufts of hair.

"I had to do a double take because I had never seen a kitten in such horrible shape. She looked up at me with these big eyes, my heart broke, thinking about what she had been through."

Ellen raced home, trying to keep the kitten as comfortable as possible. "She settled in that night, knowing she was safe. I remember going to sleep, worrying that she might not make it."

Kai survived her first night, but the road to recovery was not an easy one.

Ellen supplemented the kitten with subcutaneous fluids to rehydrate her and started shampoo treatments and oral medication. Kai was very confused and understandably unhappy.

"She couldn't understand I was trying to help her. I couldn't touch her unless I had gloves on, and I couldn't hold her close without her wrapped in a blanket. I couldn't even give her a kiss, and risk exposing myself to ringworm."

With little to no appetite, Ellen had to syringe feed her during the first week. It was a lot for a tiny kitten to handle. "I only hoped that somehow, she knew I loved her and needed to do this to save her."

Over the next few weeks, Kai began to improve, and her energy levels soared. She was no longer the same kitten that Ellen first met at the shelter. As she got stronger each day, her desire to play and run around also increased.

"She still had significant ringworm, preventing her from interacting with other kittens. All she had was me.... and she was mad at me for what I represented, baths and meds. I would try so hard to play with her, but she wanted nothing to do with me," Ellen told Love Meow.

"As her hair started to grow in, She was emerging as a beautiful black tabby with stripes. It was amazing to see her get better each day. The medication was reduced and the baths were needed less. She actually began to like me."

After about 10 weeks, Kai was nursed back to health, and there was no more trace of ringworm. "I could finally hold her and give her kisses. I had waited so long for these moments."

Kai still had a long way before she was comfortable with being touched and held. Ellen began socializing her with daily cuddling. She wasn't thrilled at first, but eventually warmed up to it.

After having gone through so much during recovery, the kitty had to re-learn that hands are not enemies. "It wasn't easy. Each time, I thought we made progress, we'd take a step backwards," Ellen said.

"She seemed to be more playful, interested in toys. I was even able to introduce her to my resident cats, a little bit at a time. She didn't know how to act, and she would just pounce and wrestle. My own cats are so calm and tolerant, we were able to help re-train her with lots of patience."

"She became fun-loving and silly. She also started doing this game of 'Tag, you're it,' jumping up on my leg and expecting me to run after her."

When Kai was ready for adoption, Ellen hoped that someone special would give this little girl a loving home she so deserved.

"Out of nowhere came an interested adopter. She had a family with kids, a dog and a cat. I couldn't believe my dreams had been answered," Ellen told Love Meow.

"I hesitantly told her all the things about Kai, her ringworm, her behavioral issues. I waited for her to say 'Thank you. Goodbye." But that didn't happen. She saw the best in Kai, and loved her in spite of her personality quirks."

On March 2nd, Kai met her forever humans. They were instantly smitten with her and embraced her as part of their big family.

"She fit in perfectly and everyone loves her. Her new cat sibling adores her and plays with her constantly," Ellen said. "They renamed her 'Flicka', as she's constantly flicking her tail, ready to pounce and jump… but in a good way."

"There were so many possible outcomes for the worst, yet the best outcome prevailed."

Related story: Kitten Who Doesn't Grow, Finds Someone She Loves After Living Her Whole Life in Hoarding Situation