This little kitten who was found on the streets of Philadelphia, faced yet another challenge when she was taken to a local city shelter. 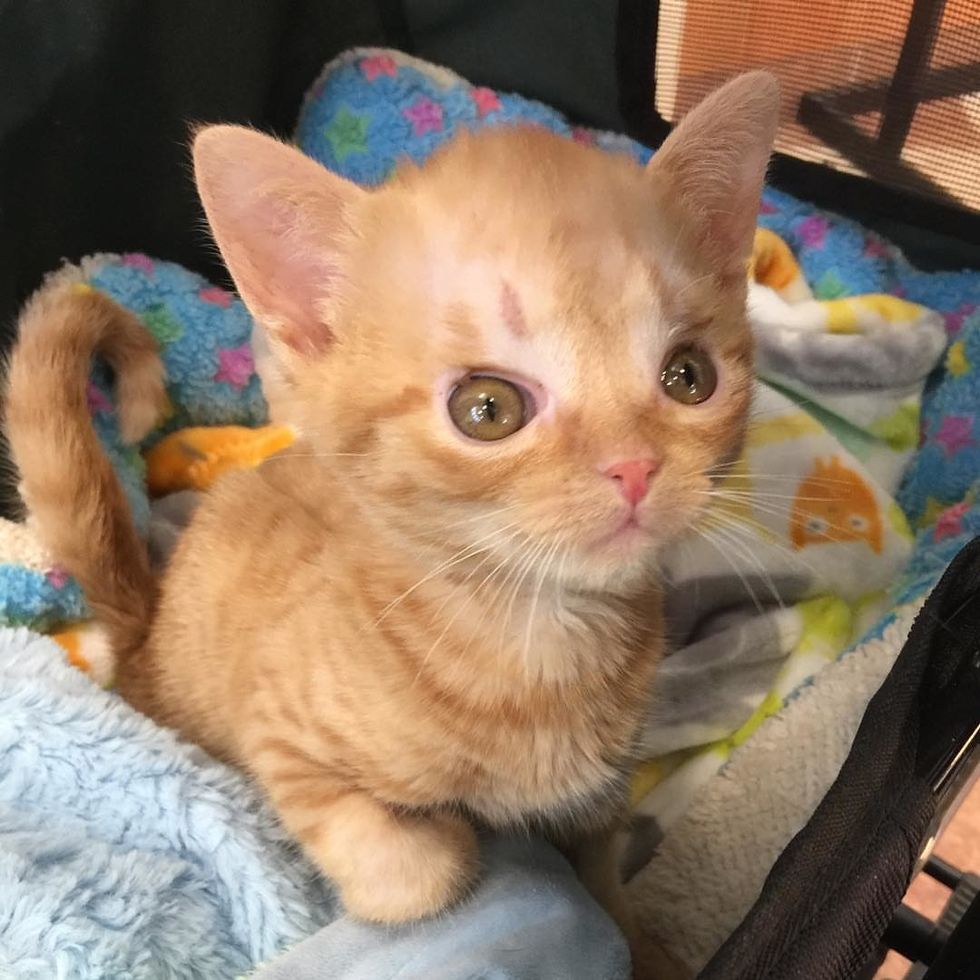 Tate (aka Tater Tot), a polydactyl, was found abandoned outside, all alone. As a bottle kitten, the shelter didn't have the resources to keep her. Jen Mack, founder of Kitkat Playroom (all-volunteer nonprofit rescue), drove across the state from New Jersey and rescued the kitten in the nick of time.

At two weeks old, Tate was just skin and bones. As soon as she was introduced to a bottle, she latched on right away, eating voraciously.

A week later, Jen began to notice a large soft spot atop her head. After seeing a neurologist at Red Bank Veterinary Hospital, they discovered that Tate was born with hydrocephalus. "It is an extremely dangerous condition where excess cerebral spinal fluid builds up in her brain," Jen told Love Meow. 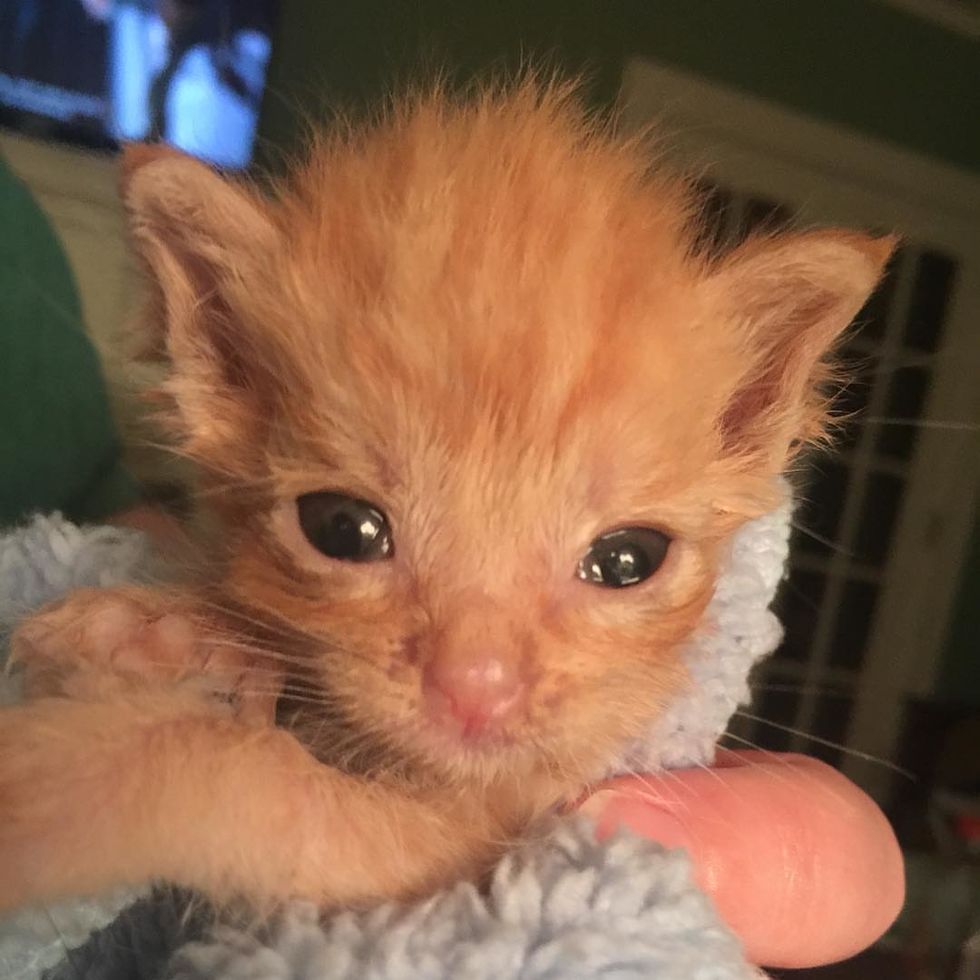 Over the next few weeks, the ginger kitten underwent two procedures to remove excess fluid. After the second emergency drain, they decided that it was time to give her life-saving surgery where a magnetic adjustable shunt would be placed inside her brain.

"Right after her surgery, she was eating like a champ, moving around great, and using her litter box. As she grows, the amount of fluid that the shunt drains is changed externally by magnets and doesn't require surgery." 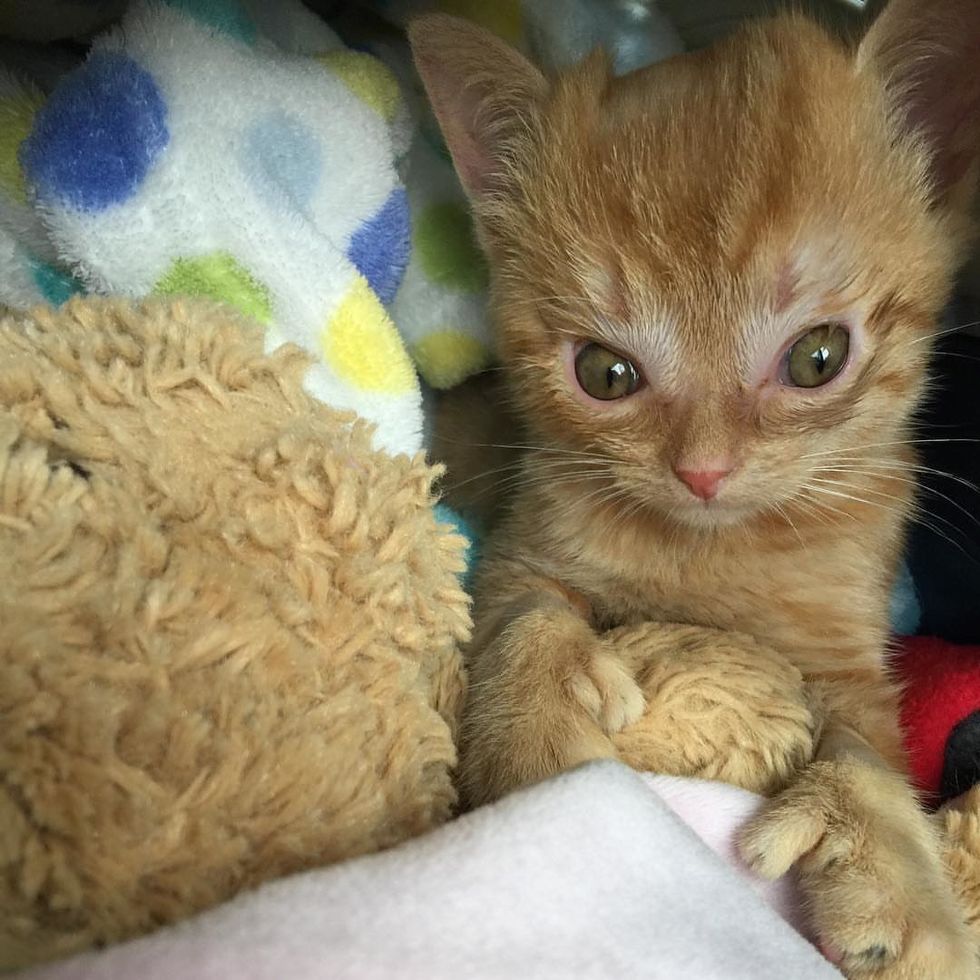 This little kitty is simply unstoppable.

"At nine weeks old, she had been through two brain procedures and one brain operation that'd never been performed on a kitten as small as she was. She wanted to bounce and play. She has no idea there's something different about her," Jen said.

Three weeks post-op, Tater was healing wonderfully. She took long naps to rest and recover between her 10 minute playtime breaks during the day. When she played, she went all out, zooming and romping around the room, completely energized. 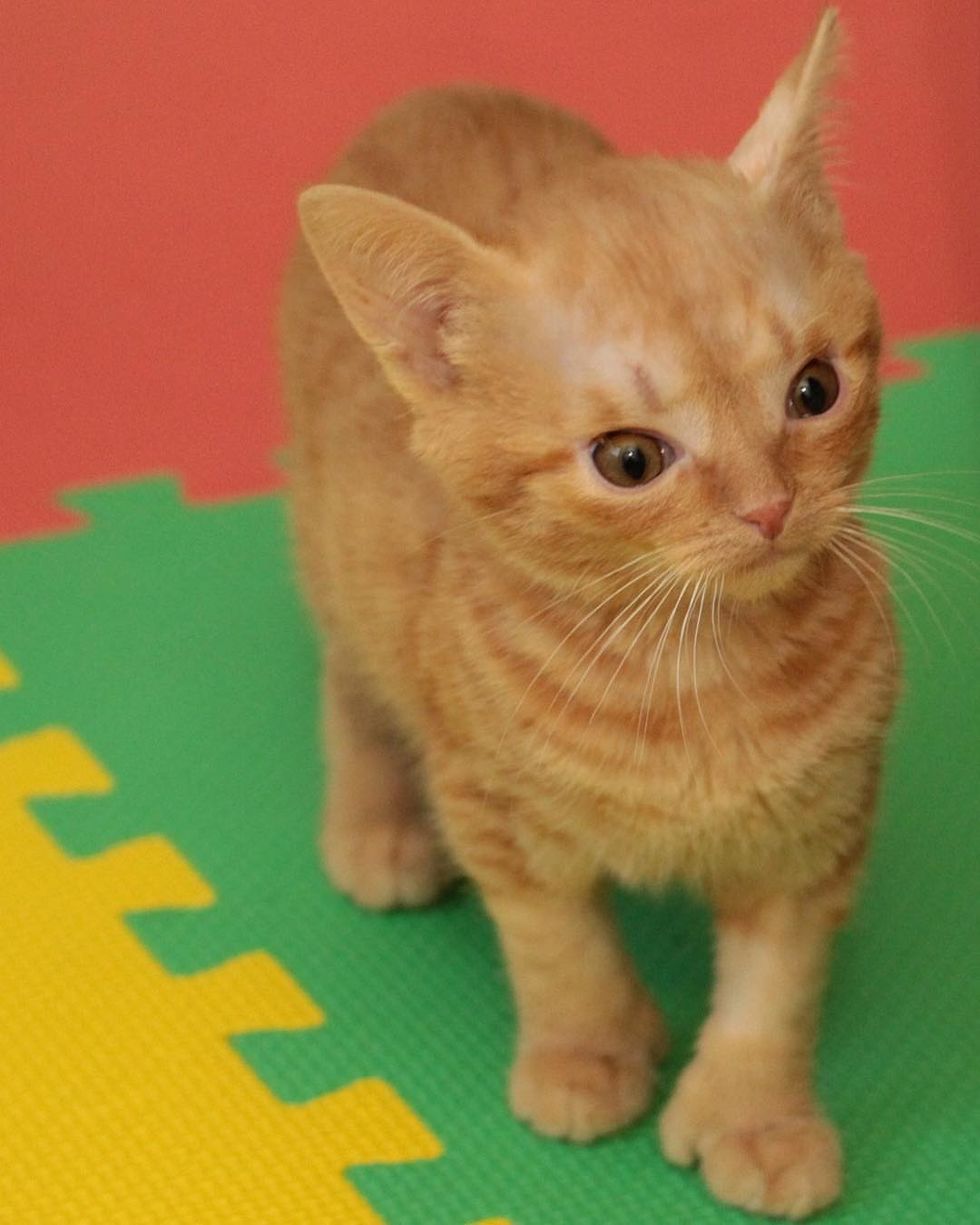 At 14 weeks old, Tate got to run and play like a regular kitten.

"This is what we've worked so hard to accomplish for her. She's such a champion. She rocked recovery," Jen added. "I even got cuddles in bed with her for the very first time." 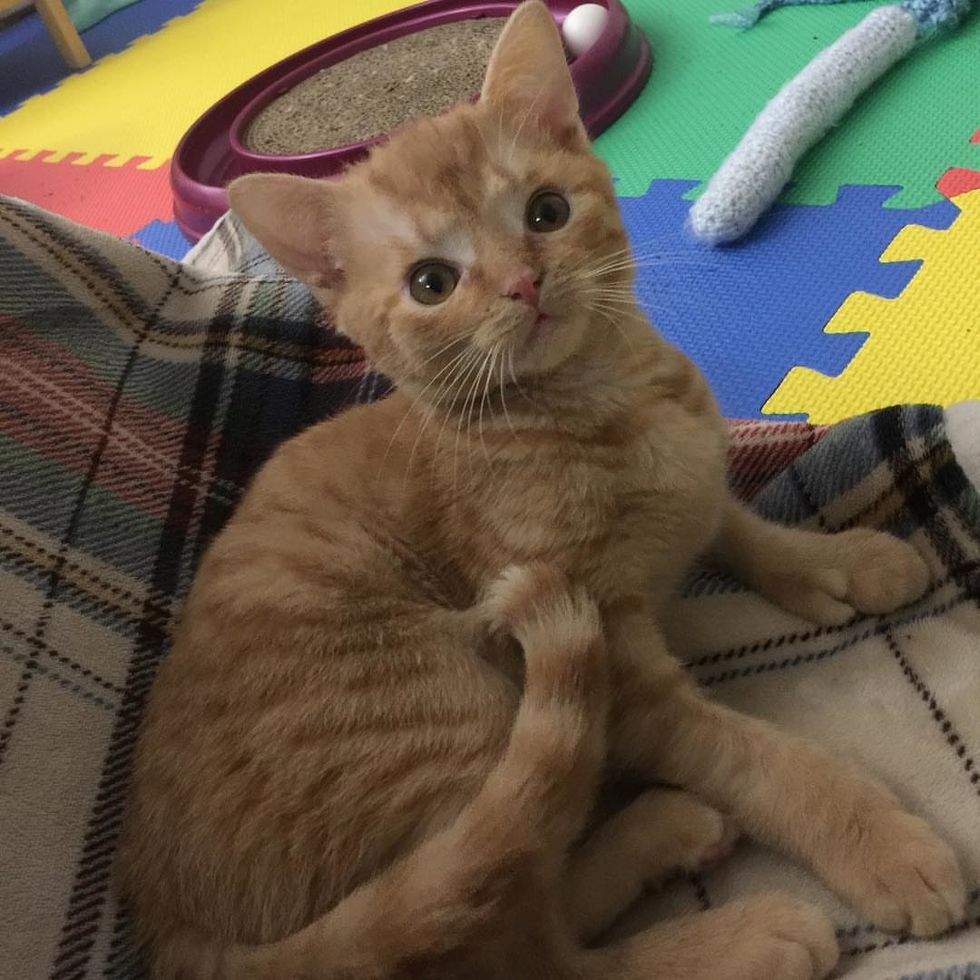 As she recovered, Tate became more affectionate and increasingly demanded Jen's attention. She would purr up a storm whenever they cuddled.

"My morning began early to the sounds of this one, meowing for me to wake up. My night ended much the same way, with her snuggled under the covers with me. I never thought she'd ever want to snuggle, but here we are." 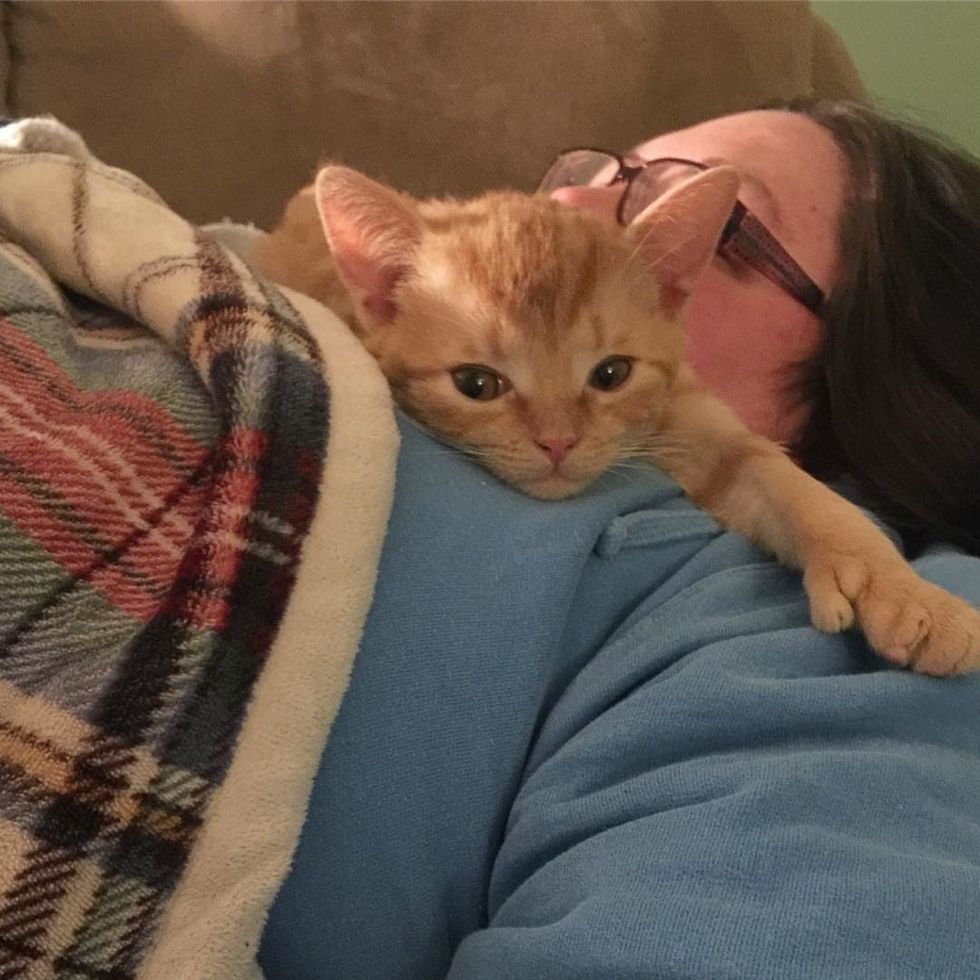 Cuddling with her rescuer really helped her throughout her recovery. She was constantly loved and was never alone.

Watch Tate in this adorable video:

Tate the kitten cuddles with her rescuer youtu.be

Six weeks after surgery, the veterinary team was amazed with her progress. Tate was done with all medications and came out a true warrior.

Tate will sleep on Jen instead of her regular cat beds. They snuggle on for hours until she wakes up. 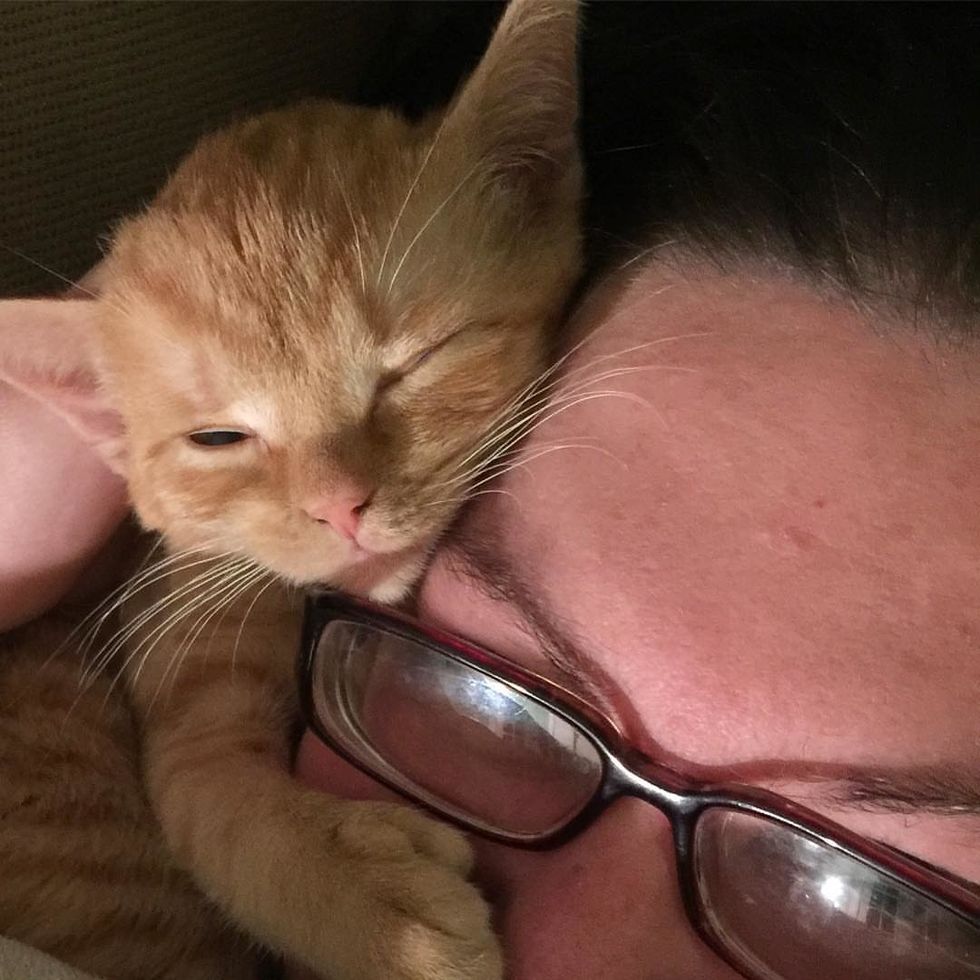 Tate has become quite the cuddle-bug. "She's the cutest little nap buddy ever." 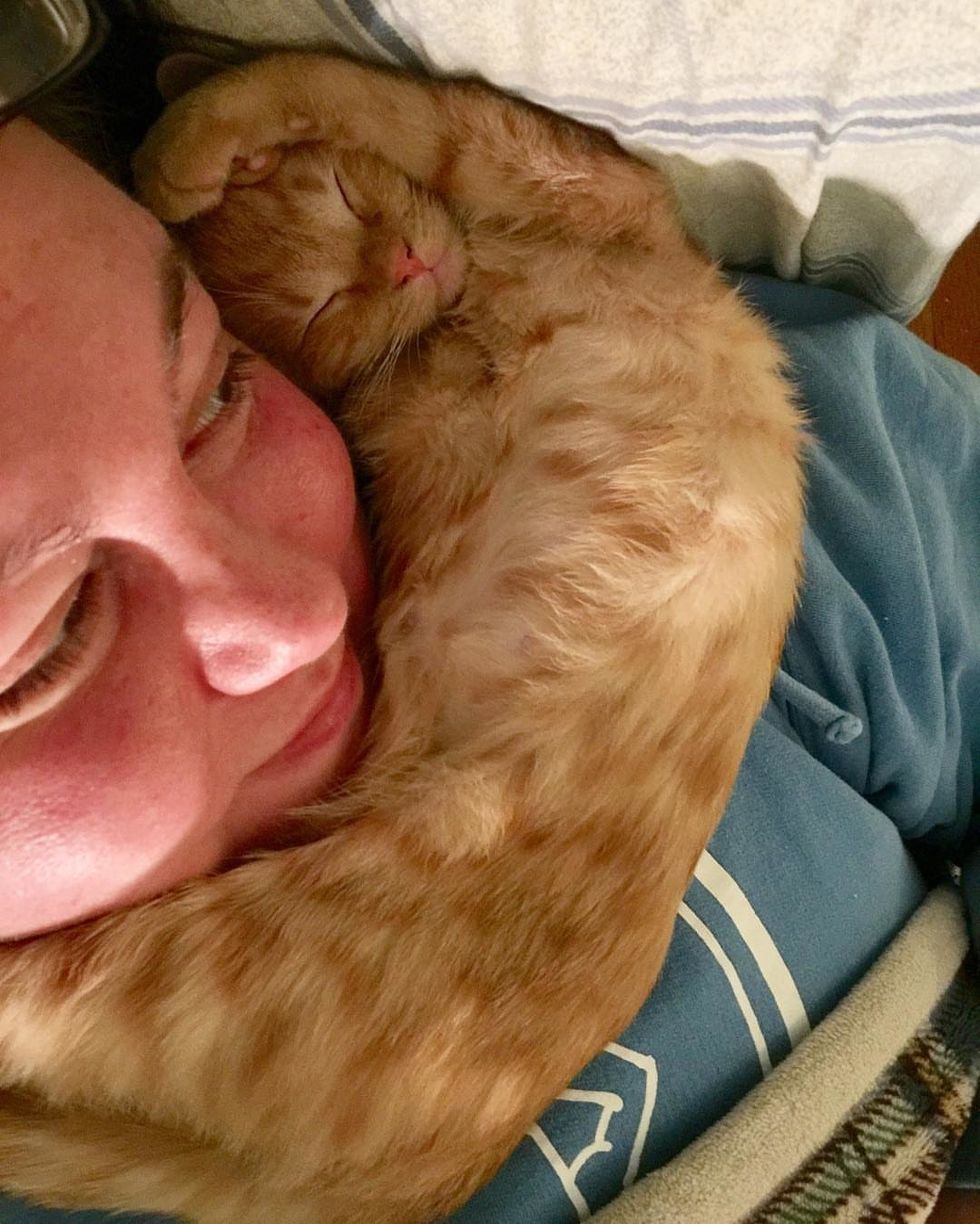 She jumps up on the couch every day for nap time next to Jen's face, and wouldn't take no for an answer.

"If I'm busy, she gets upset until I sit down, so she can take her nap with me." 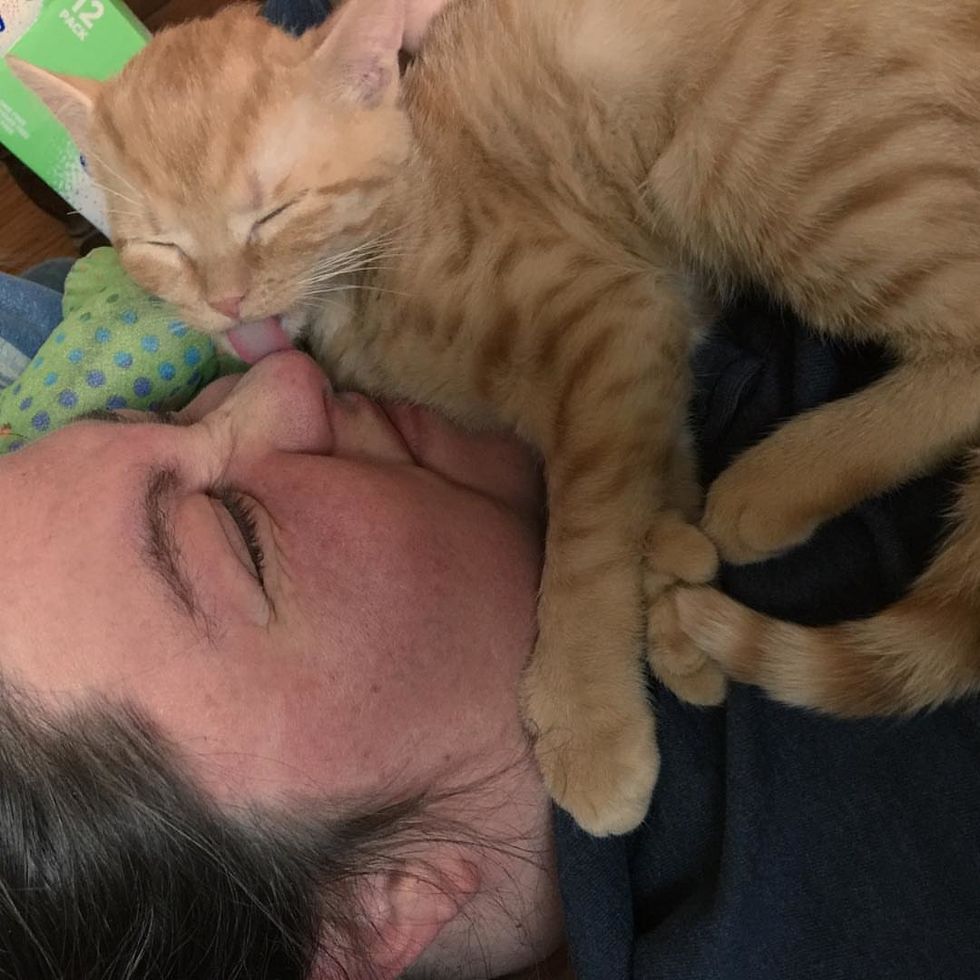 Tate continues to pull out surprises.

"She has never so much as climbed a single stair until one morning, when she decided to climb all the stairs. She did it twice and surprised me in my bedroom when I turned around and there she was." 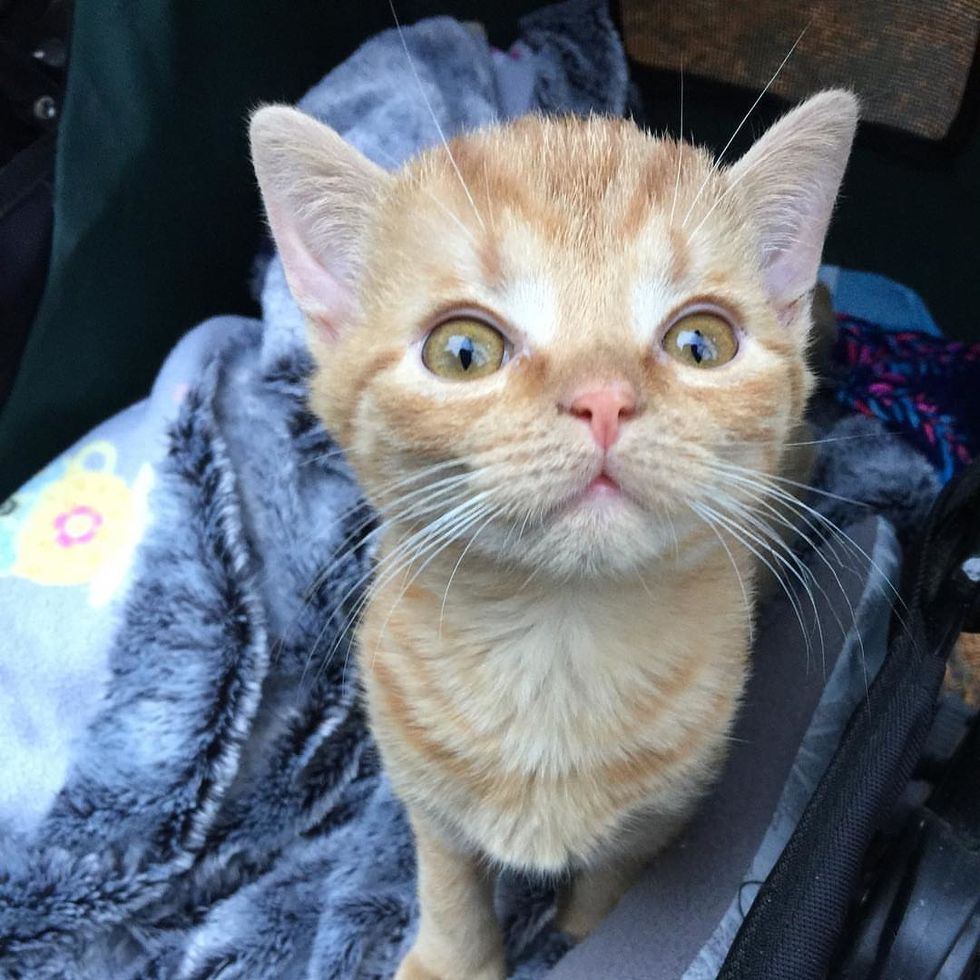 "She acts like any other kitten her age except for some depth perception oddities (which just make her extra silly). She gets to spend a lot of time with other kitties and zooms all over the first floor," Jen said. "Tate is the youngest and smallest animal ever to receive this surgery and survive."

This amazing little kitty continues to give her humans cuddles every day, doing what she does best. 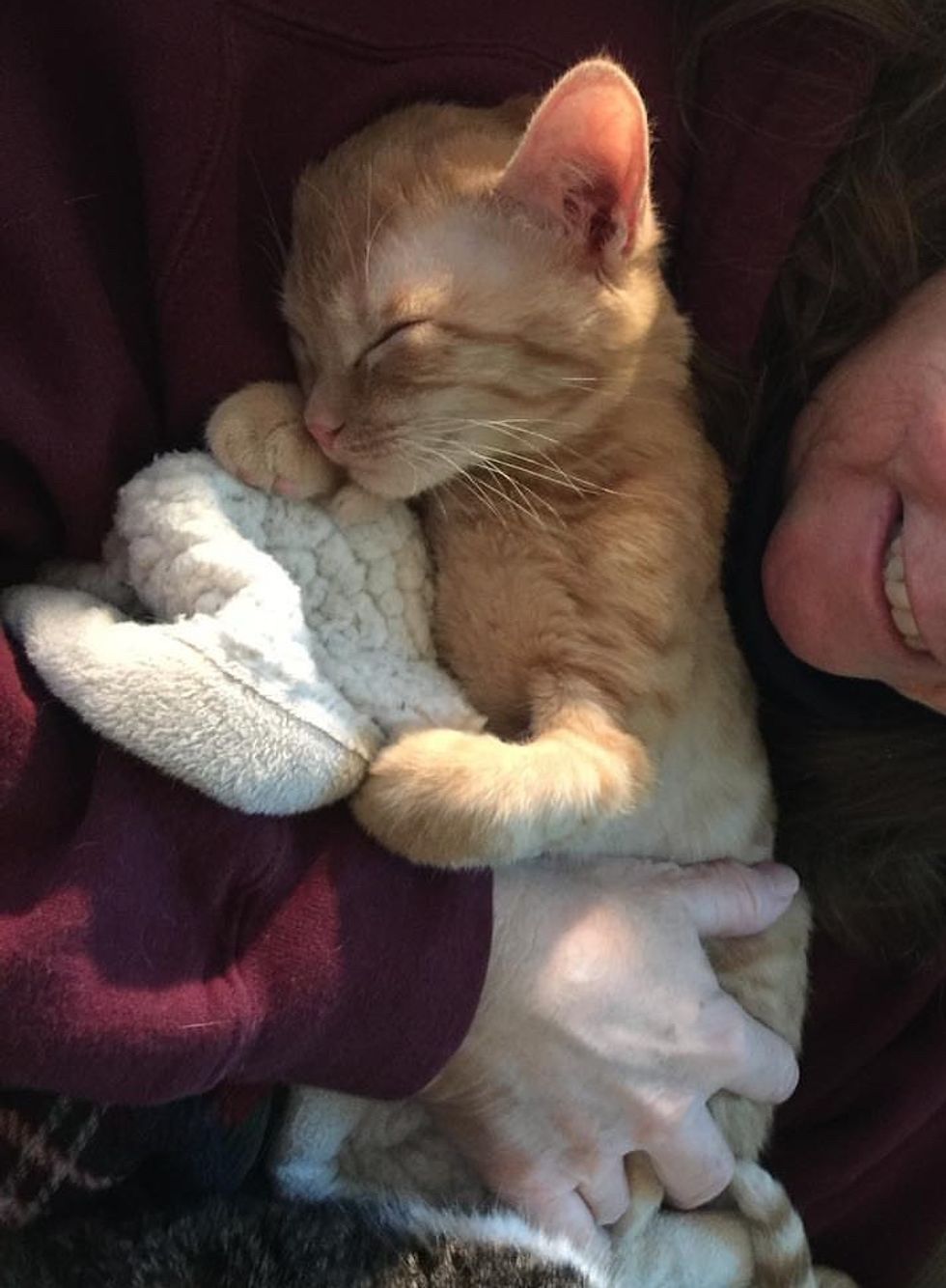 Related story: Wobbly Kitten Who Couldn't Stand Up, Amazes His Foster Dad When He Learns to Run