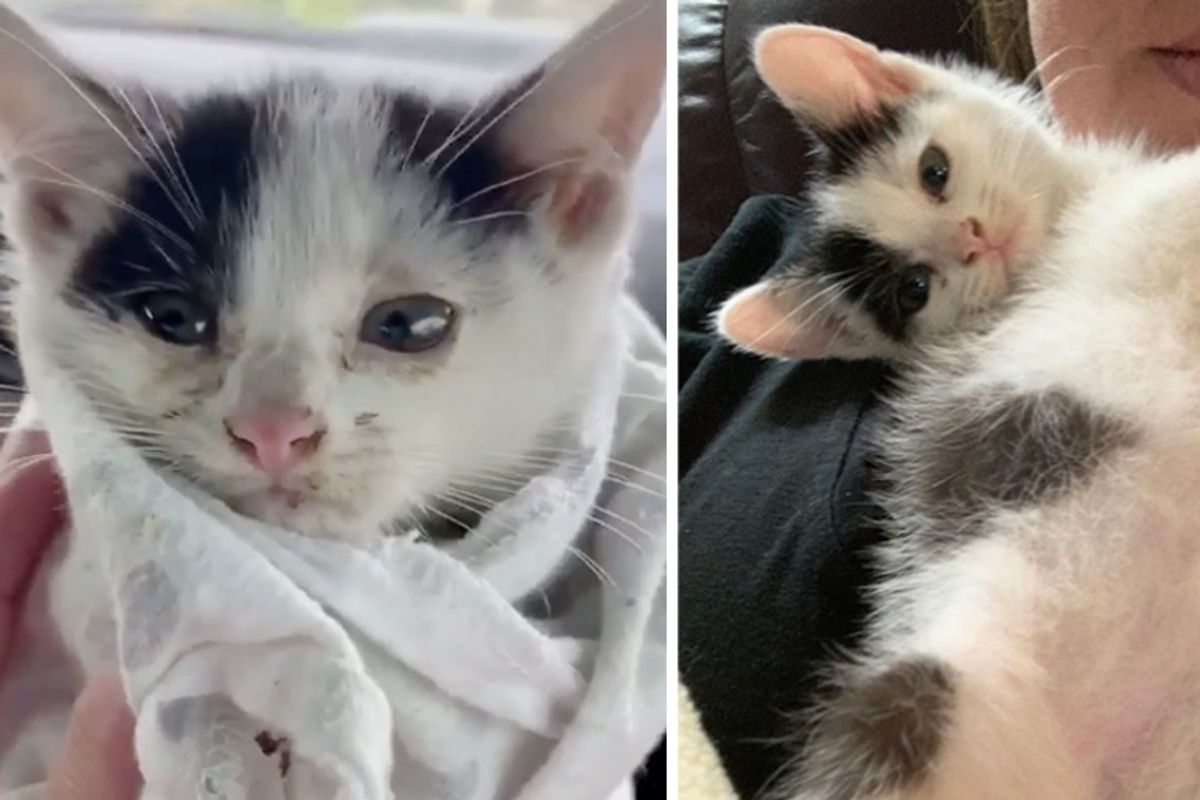 A little kitten who was found at a tire shop, got a new lease on life when he was rescued in the nick of time.

About a month ago, employees from a tire shop in Robstown, Texas spotted a scrawny little kitten covered in dirt, fleas and grease. He was limping from what appeared to be a leg injury.

They took the shy kitty in, gave him a place to stay for the night and reached out to Coastal Bend Cat Rescue (in Corpus Christi, Texas) for help.

"The people who worked at the tire shop, believed that somebody abandoned him there, or he may have hitched a ride in a vehicle engine," Lindsay Haglund of Coastal Bend Cat Rescue told Love Meow.

The kitten was just skin and bones and had a severe upper respiratory infection. Rescuers went to pick him up and immediately took him to one of their medical foster families.

"He was very sick the first day, and we didn't know if he would make it. He was lethargic from flea anemia, malnourishment and also a serious infection in his leg," Lindsay said.

After several baths to remove all the fleas, the kitten started to perk up.

His foster mom stayed up with him through the night, giving him high calorie supplements, subcutaneous fluids and vitamins, bringing him back from the brink.

The next day, veterinarians discovered an abscess buried deep in his upper shoulder. They cleaned his wounds and gave him antibiotics to fight the infection.

"We believe he would not have survived without this timely medical care. We named him Goodrich after the American tire company since he was found at a tire shop."

Over the next two weeks, the kitty continued to improve and his energy level soared.

Watch the kitty's rescue journey in this video:

"He made amazing progress in foster care and went on to make a full recovery."

"Once he was old enough and weighed enough for neuter surgery, our rescue team transferred him to our local Cattery Cat Shelter to be placed for adoption," Lindsay told Love Meow.

"We focus primarily on the fostering process for medical cases and neonatal kittens, then transfer our cats to the local no-kill shelters for adoption placement once they are ready. Since South Texas has such a crippling stray problem, we are able to save so many more lives by working closely with the local shelters."

"We received the very good news that Goodrich was adopted very quickly at the shelter."

The little tire shop kitty is now living a life of luxury, surrounded by people who love him to bits.

Related story: Cat Walks to Neighbor's Home and Finds Kindness After His Own Family Left Him Behind