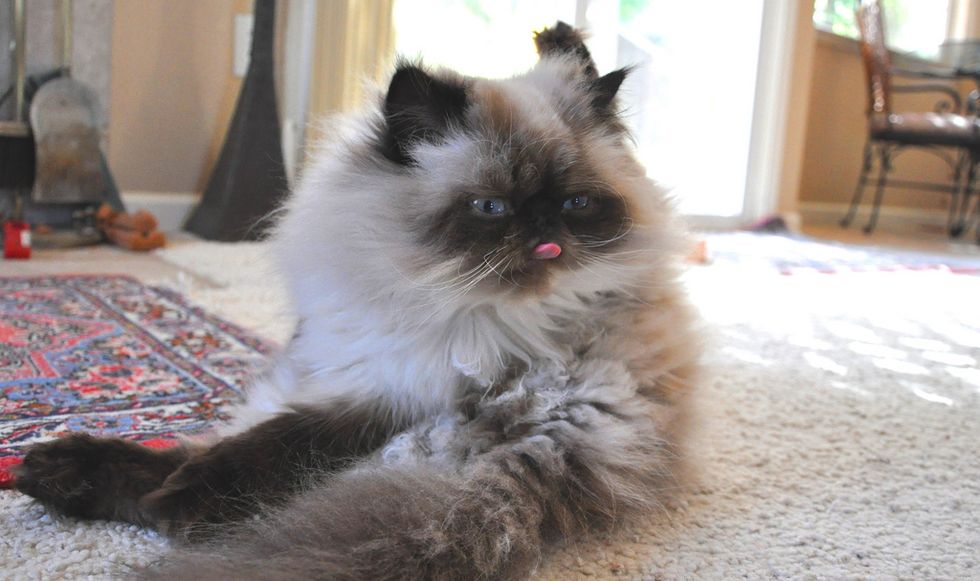 Sweet Mishka's story has a bit of a sad beginning. Two years ago a group of 95 cats were brought into one of our local rescues, Purebreds Plus Cat Rescue. The cats had been taken from a home of a breeder who had kept approximately 130 cats in terrible conditions and 95 of them were lucky enough to survive their ordeal. Mishka was one of the younger cats from that group and he was 1.5 years old when he was rescued. He was extremely shy and timid in the beginning but with the wonderful care of his foster moms, he started to blossom into a sweet little boy.

We were lucky enough to adopt him a few months after he was rescued and he is the sweetest little boy kitty we've ever had. He is extremely polite and considerate, never gets into any mischief, but just bounces around the house with his tail up in the air, always ready for a belly rub, always happy to get a little kiss on his head, and wanting nothing more than to be near us. He loves his two kitty brothers and lets Gambino groom him even though he hates getting his hair messed up, and he also loves to wrestle with Bailey Bear even though Bailey is a lot bigger than him. His all-time favorite game though is standing at my office door in the mornings and meowing until I get up to start our daily game of "chase":

Every morning at around 8 am, right when I’m settling down in my office to get some work done, Mishka appears at the door to start his favorite game of “Run, Human, Run”!

It always starts with soft meows…then he’ll get louder and louder, trying all of his different “voices” from gentle “Meows” to louder “Maaawwws” and screaming “Mawoooos”, sometimes interspersed with his most pitiful “Wowwieee”!

When it gets to the point that I can’t ignore him any more, I get up from my chair and look at him…Mishka will wiggle his butt, tail up in the air, and take off like a maniac – this is my cue to start chasing him around the house…fast…really really fast…we run like crazy, down the hallway, around the living room, through the kitchen, and end up with Mishka jumping on the dining room table, rolling on his back, and purring like a fool! He gets some cuddles and some nuzzles and some “who’s Mama’s silly boy” hugs and then I’m allowed to go back to my office. Five minutes later, the whole thing starts up again and continues for a good hour or so.

I really love my special “play time” with Mishka, but it gets a bit overwhelming on days when I’m swamped with work. I’ve thought about tying some food around his neck to see if I can get Bailey Bear to chase him, but then again, I’d fear for Mishka’s safety! Nobody comes between Bailey Bear and his food!

Oh, and of course I have to mention that he is a total and utter Daddy's Boy! He loves me, he loves his kitty brothers, but he worships my husband and just lights up with happiness as soon as he sees his Daddy.