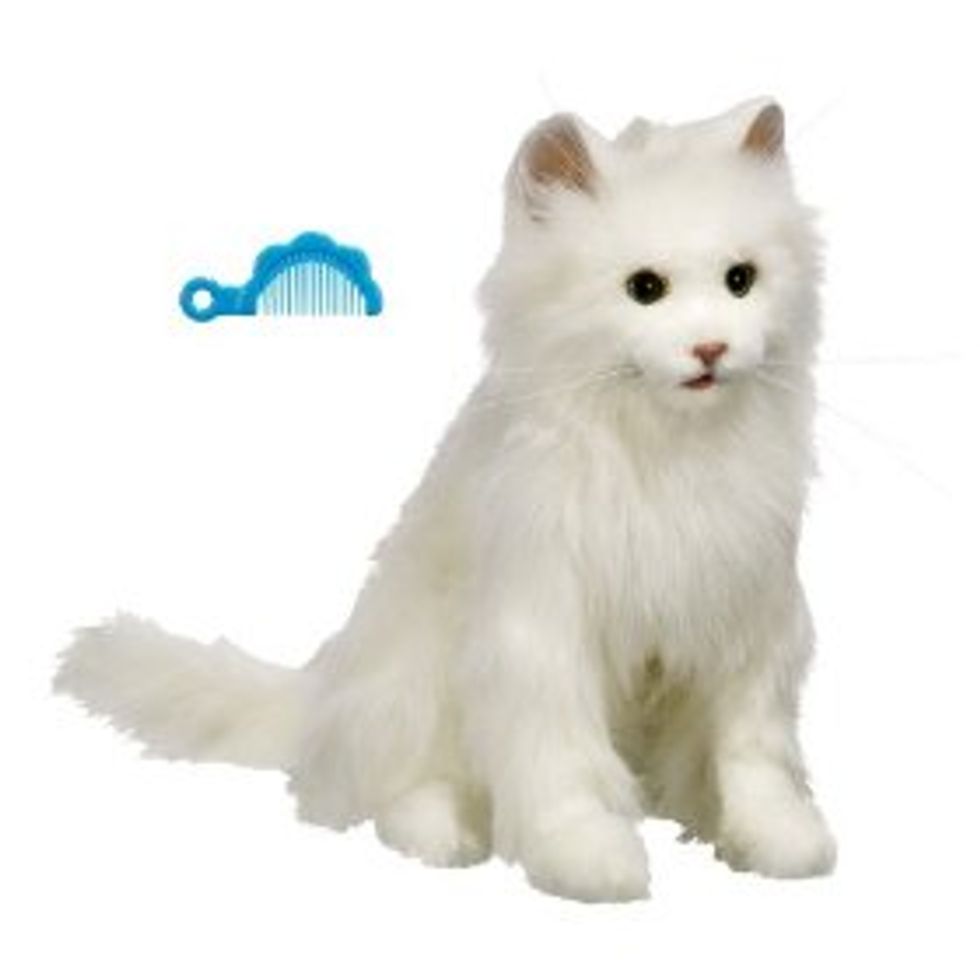 I don't know how Japanese people do it, but they are on a high from inventing the most unthinkable robots. By unthinkable I mean how life-like the robots look. The robot fetish is motivating Japanese inventors to create all kinds of new gadgets. Lately we have seen the most realistic humanoid, a girl who talks to you with greatly elaborated facial expressions. The Sony Aibo that brings AI toys to a new era. Robots are no longer just for kids. In fact in Japan, they are developing cat robots to aid people at the nursing home or terminally ill patients.

Why cats? Because statistically, cats are the best therapy pets out of all the animals. Something about their purring and laid back manner help reduce a person's blood pressure and tension. Today, I am going to introduce to you the Yume Neko Smile (translated: Dream Cat Smile) cat robot that once took the shelf by storm.

The cat robot is a 13 inch tall, 4.5 lbs white long-haired cat (the coat is made entirely of polyester). It is built with 5 senors distributed around the body. I am suspecting some are placed in the head, possibly where the eyes are. The toy is run by 3 "C" batteries.

What can Yume Neko Smile do?

She makes loud purrs and meows as you pet her on the scruff, head or under the chin. She also blinks her eyes, moves her mouth, turns her head, pulls her rear up and lies down. If you decide to give her tail a gentle squeeze, she might get mad by hissing back at you. Though you may think robots don't get tired, Yume Neko Smile is programmed to go to sleep (set to the lower power mode) after being left alone for a while where you see her slowly closing her eyes and starting to snore a little bit. As soon as you give her a slight pad on the head, she will wake up.

Some Issues Pertaining to the Cat:

The toy may come off a bit creepy to some people, but generally it is a pretty good alternative to people that are allergic to cats, but still dying to have one. All the sounds are pre-recorded, so they sound the same when replayed, but the anticipation to know what the cat will do next always keeps people intrigued. The cat is, after all, an electronic toy controlled by a bunch of gears and wires, so when the cat is interacting with people, it is also making a constant motor whirring sound, but it doesn't really throw off the fun and the experience.

What do Real Cats Think About Her?

If you acclimate a real cat with a Yume Neko Smile, the real cat will never fall for the robot cat. Cats recognize each other by the way they smell. Also, the body temperature is an indicator for them to know if you are of the similar kind. The robot itself simply doesn't have any body warmth beneath the white coat. Your cat might find her just like any other toys. Others might find her as a threat or even not interesting at all.

How Much is a Yume Neko Smike?

A Yume Neko Smile costs about $179. However, I have seen another one named "Real Fur" whichlooks completely identical but priced around $57 at Amazon.com.