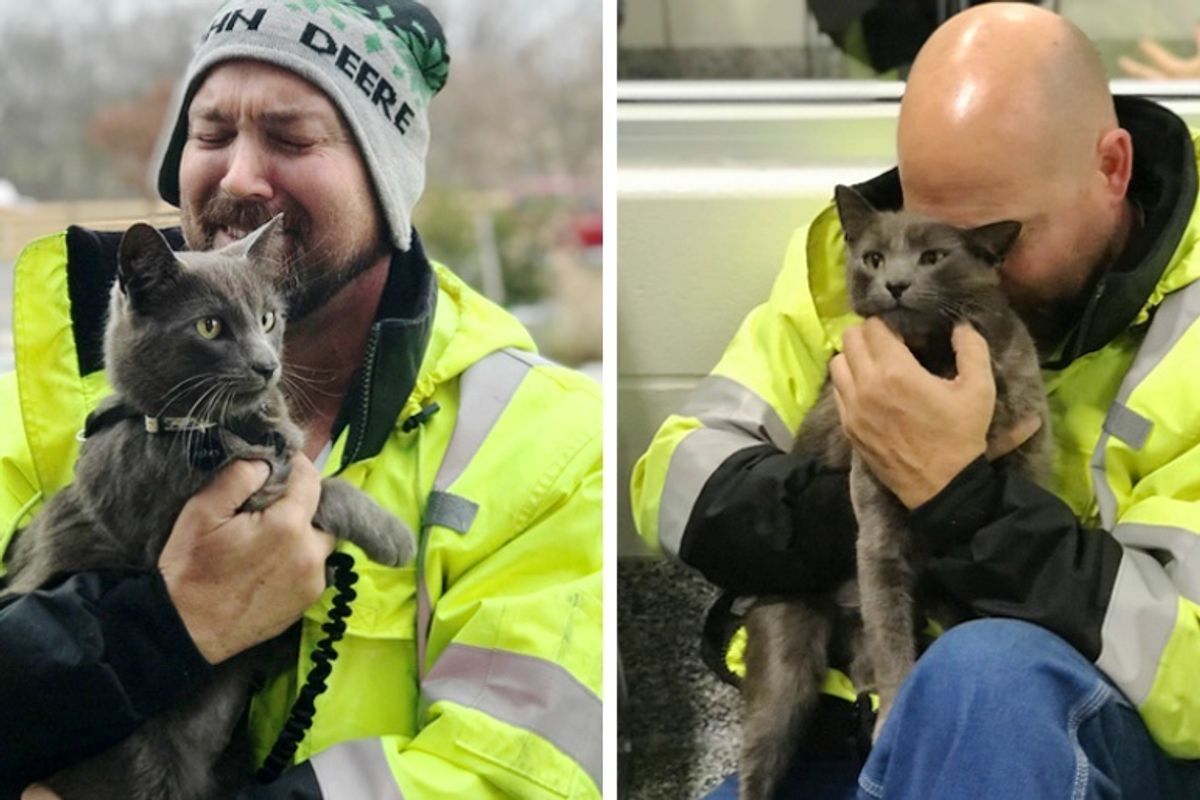 A truck driver broke into tears when his beloved cat found his way back to him after months of searching. 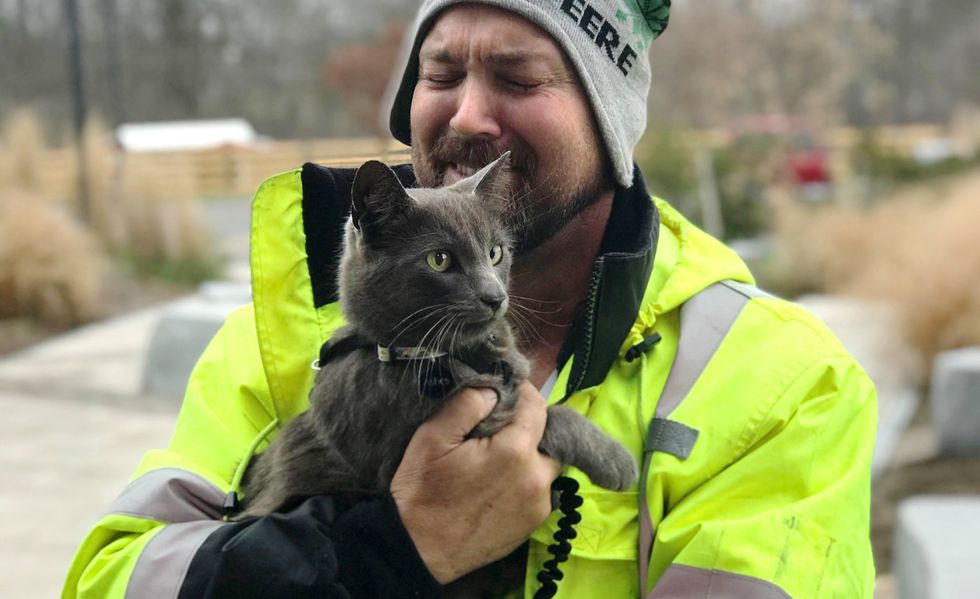 Matthew B., a truck driver, and his ride or die, Ashes the cat, have been on the road together since their paths crossed. The 3-year-old gray cat shares an incredible bond with his human as they travel together around the country, in the comfort of his 18-wheeler.

Ashes was his work partner and never left his side until last July when they were passing through Springfield, Ohio. The cat accidentally slipped out of the truck while it was parked at a Love's stop.

He was spooked and quickly ran off into the bushes. Matthew was devastated and searched every nook and cranny for his best friend. After combing through the area but to no avail, he was heartbroken as he had to get back on the road — but he knew right then that he had to come back.

Over the next few months, he rearranged his routes several times so that he could return to the very spot to look for Ashes. He kept coming back and hoping it would be the day he would find Ashes. 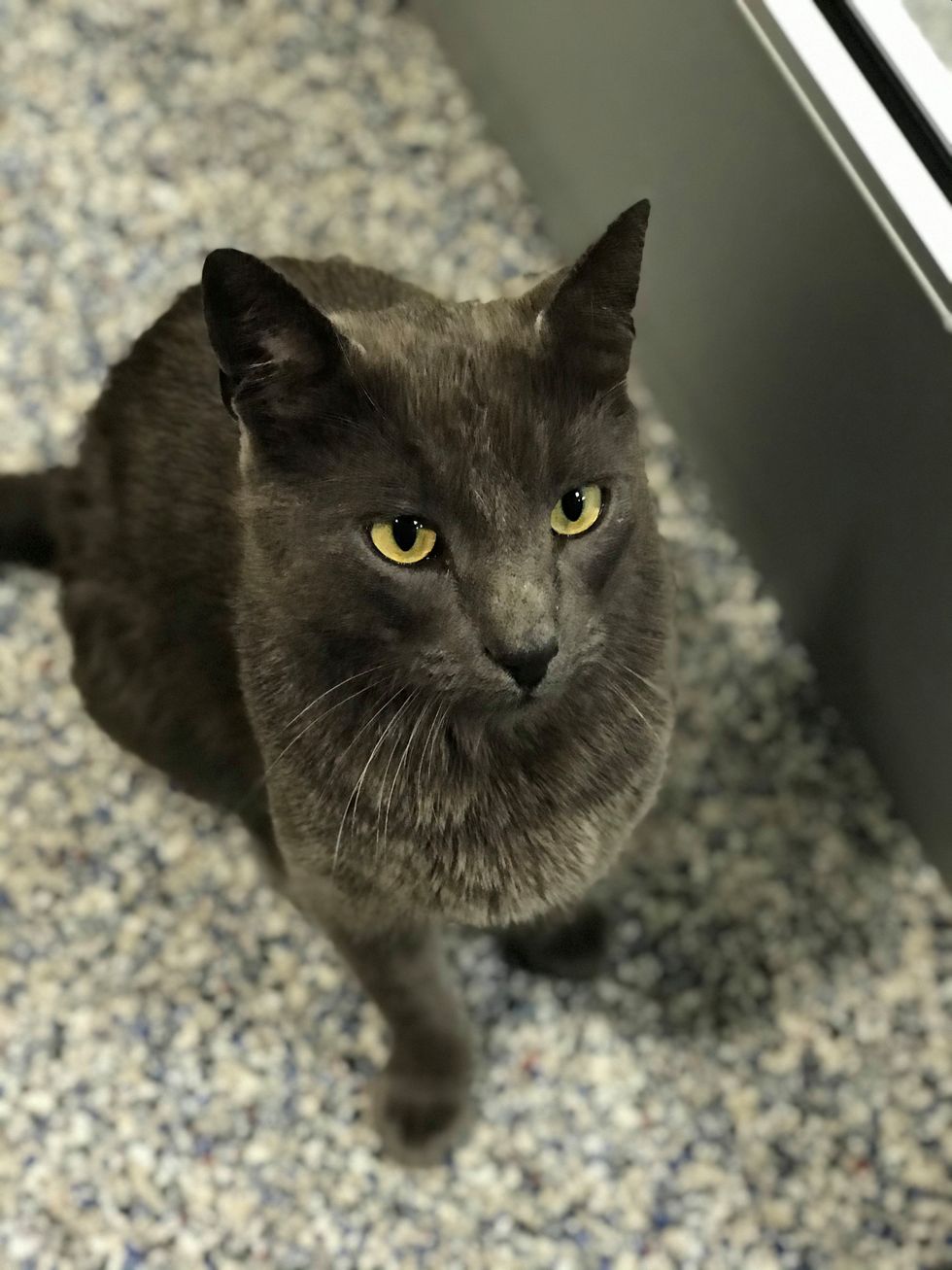 Earlier this month, Kimberly T. and her friend arrived at the same stop while she was en route to New York. Just before heading back to her vehicle, something caught her attention — a scrawny, hungry cat emerged from a bush, seeking attention.

"He was trying to not put his feet down on the ground, it was so cold," Kimberly recalled.

No one came to claim the feline so she scooped him up and brought him to her car to get him warmed up. The kitty looked rough around the edges, showing signs of having been on the streets for some time. He was in need of veterinary care and a lot of TLC. 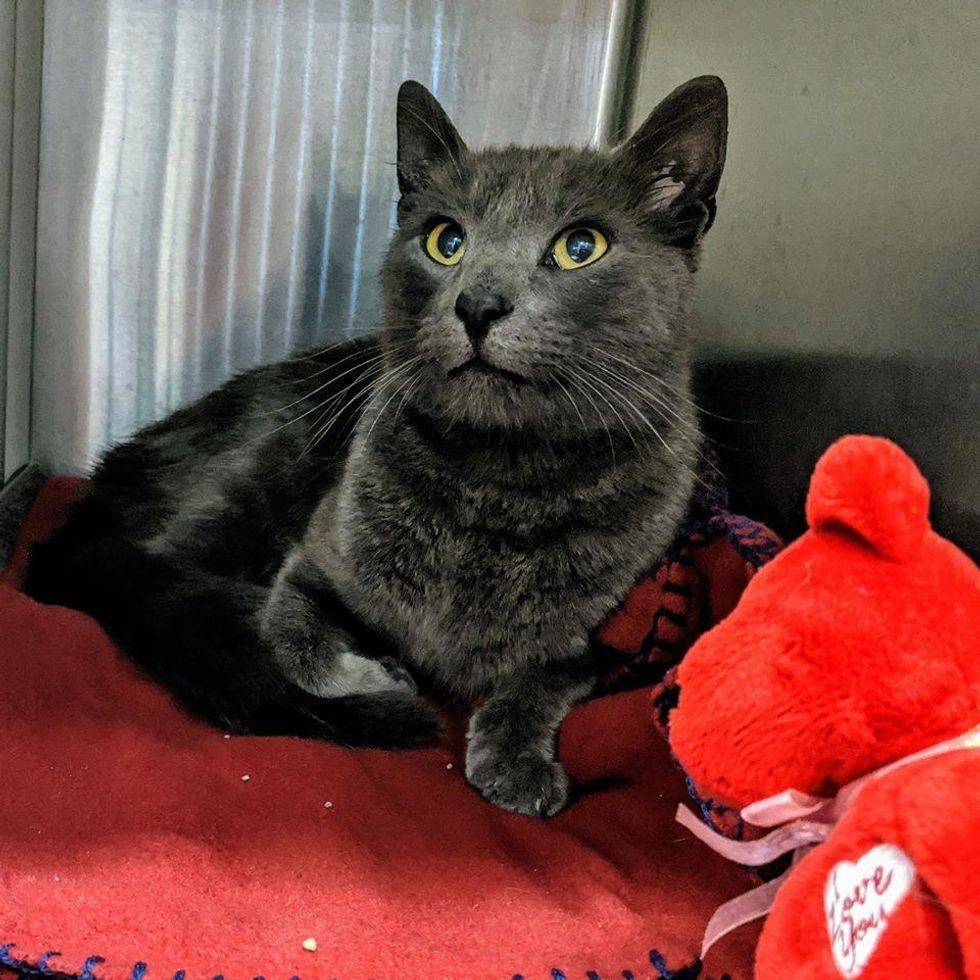 Kimberly decided to bring him along to her destination as she knew a place that would be able to help this little guy.

They reached out to Lollypop Farm, an animal welfare organization in Fairport, New York, and the shelter took him in with open arms. "What Kimberly didn't know was that this cat was not any ordinary cat — but a seasoned traveler himself," Lollypop Farm shared with Love Meow.

"Our Admissions Team immediately scanned for a microchip, as they do with all incoming pets. Not only did he have one, but he had an owner who had registered him under a Texas address that was over 1,465 miles away! This was one cross-country kitty." 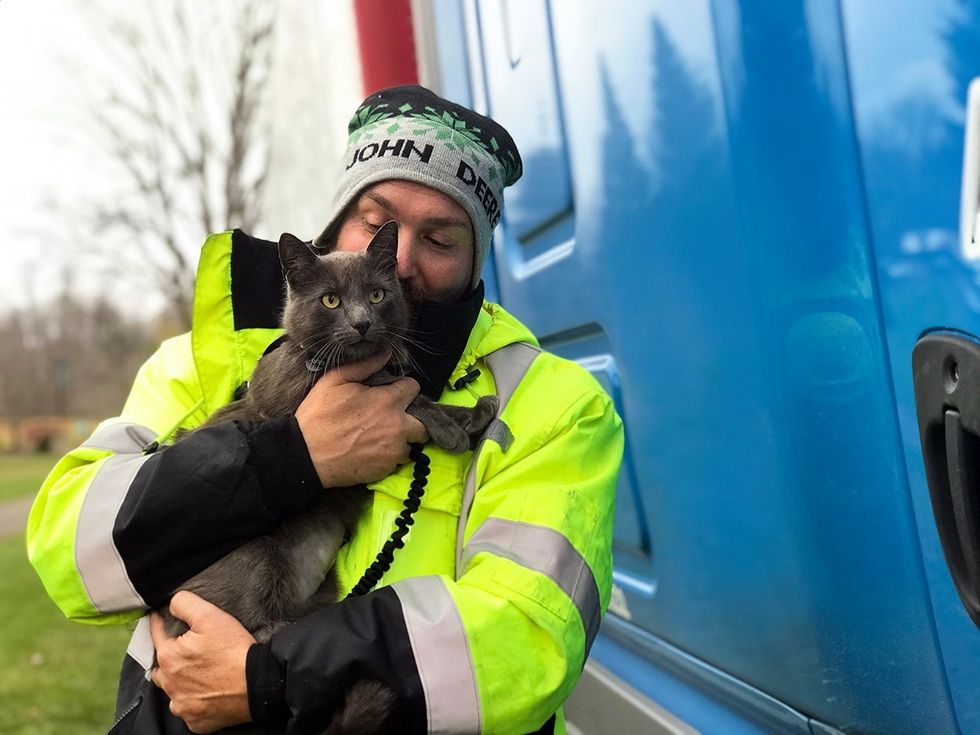 As it turned out, they found Ashes — Mathew's beloved cat. They dialed the number found from the registration information, and crossed their fingers that the owner would pick up — and he did. Matthew who was in Arkansas at the time, was in complete disbelief.

"I had been thinking about Ashes every day," he told staff at Lollypop Farm.

He immediately rearranged his driving schedule and made his way towards New York. While Ashes was counting down to the reunion date, he received the medical attention he needed, and gained some healthy weight back. 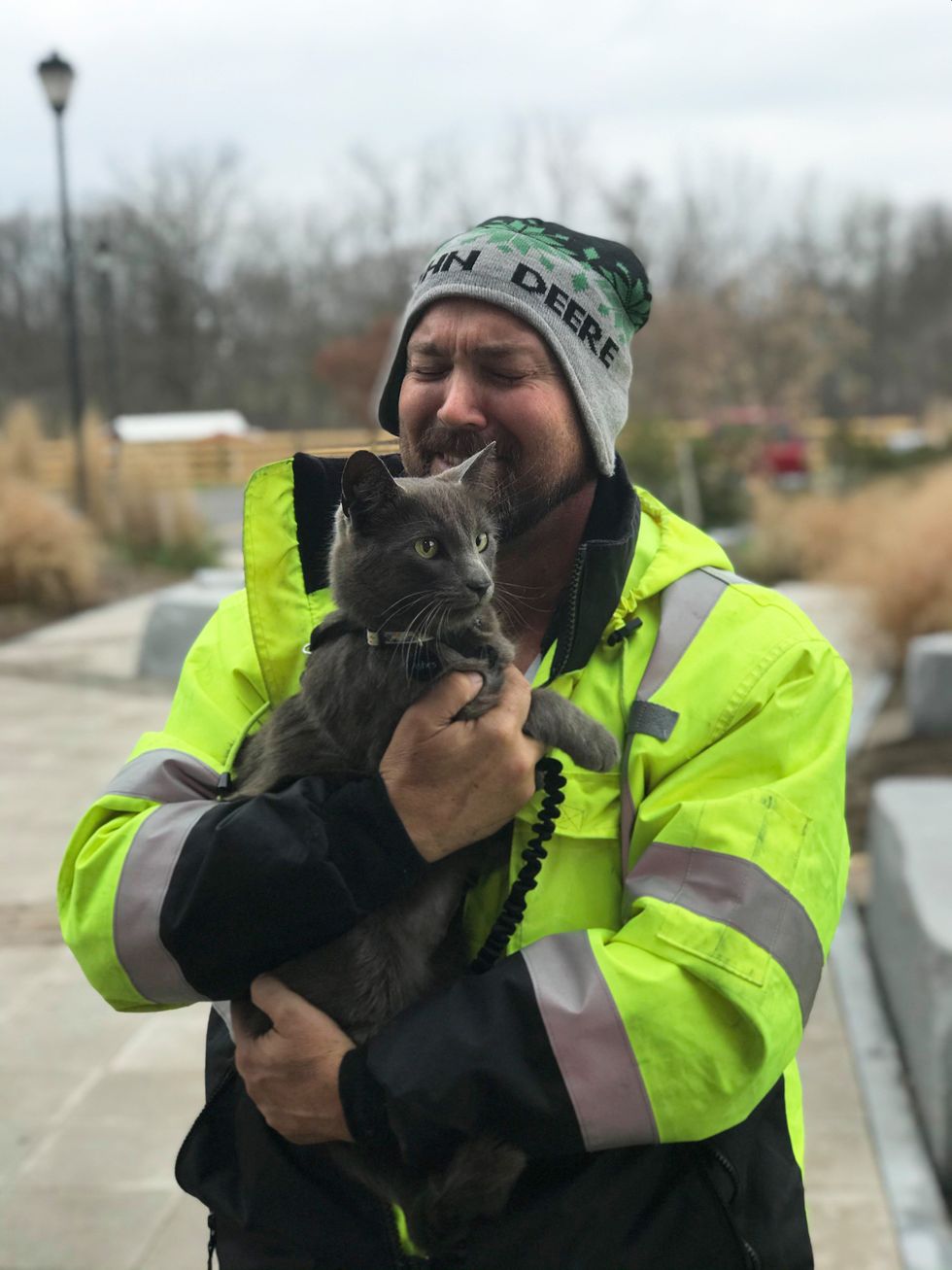 A week and a half after Ashes arrived, Matthew's 18-wheeler pulled up in front of the shelter.

The gray cat immediately recognized his human dad and went right up to him with head-butts. "Ashes knew him, and was immediately affectionate," the shelter told Love Meow.

Matthew broke into tears as he gently rubbed his head against Ashes' and held him tightly in a warm embrace.

"It's my Christmas miracle," he said. 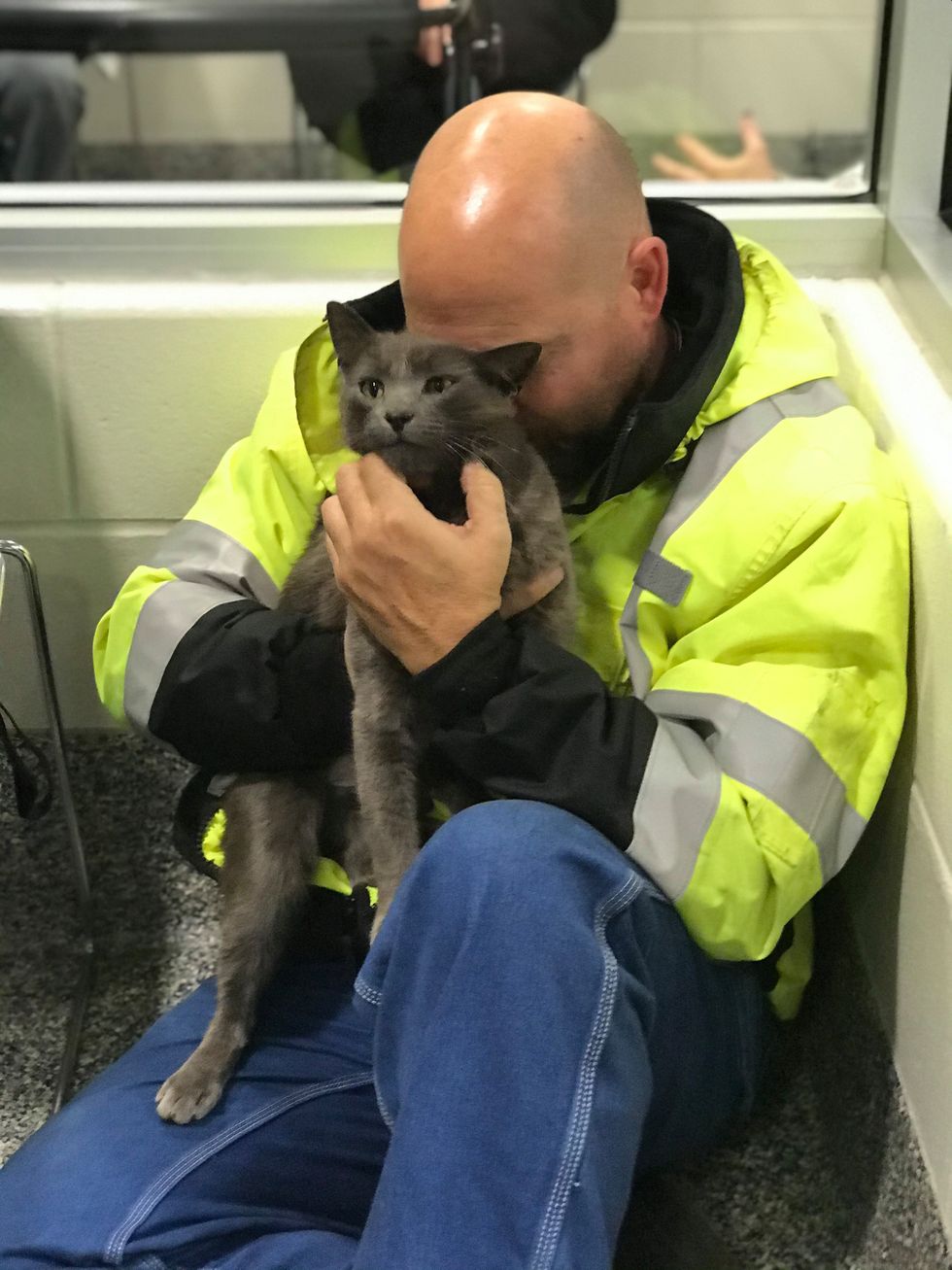 "It's that microchip – without it, I wouldn't have ever gotten him back. The women that found him saved his life, but the microchip brought him home."

Kimberly and her friend also came to witness this heart-warming reunion. They fell in love with Ashes during their ride home and were overwhelmed with happiness to see him finally back where he belonged.

"Ashes and Matthew had a close relationship before he was lost - and Matthew says now it's even closer. Ashes just seems so happy to be back with him, and is acting more loving than ever before," Lollypop Farm said.

"We couldn't be happier for this adventurous cat to be back on the right track." 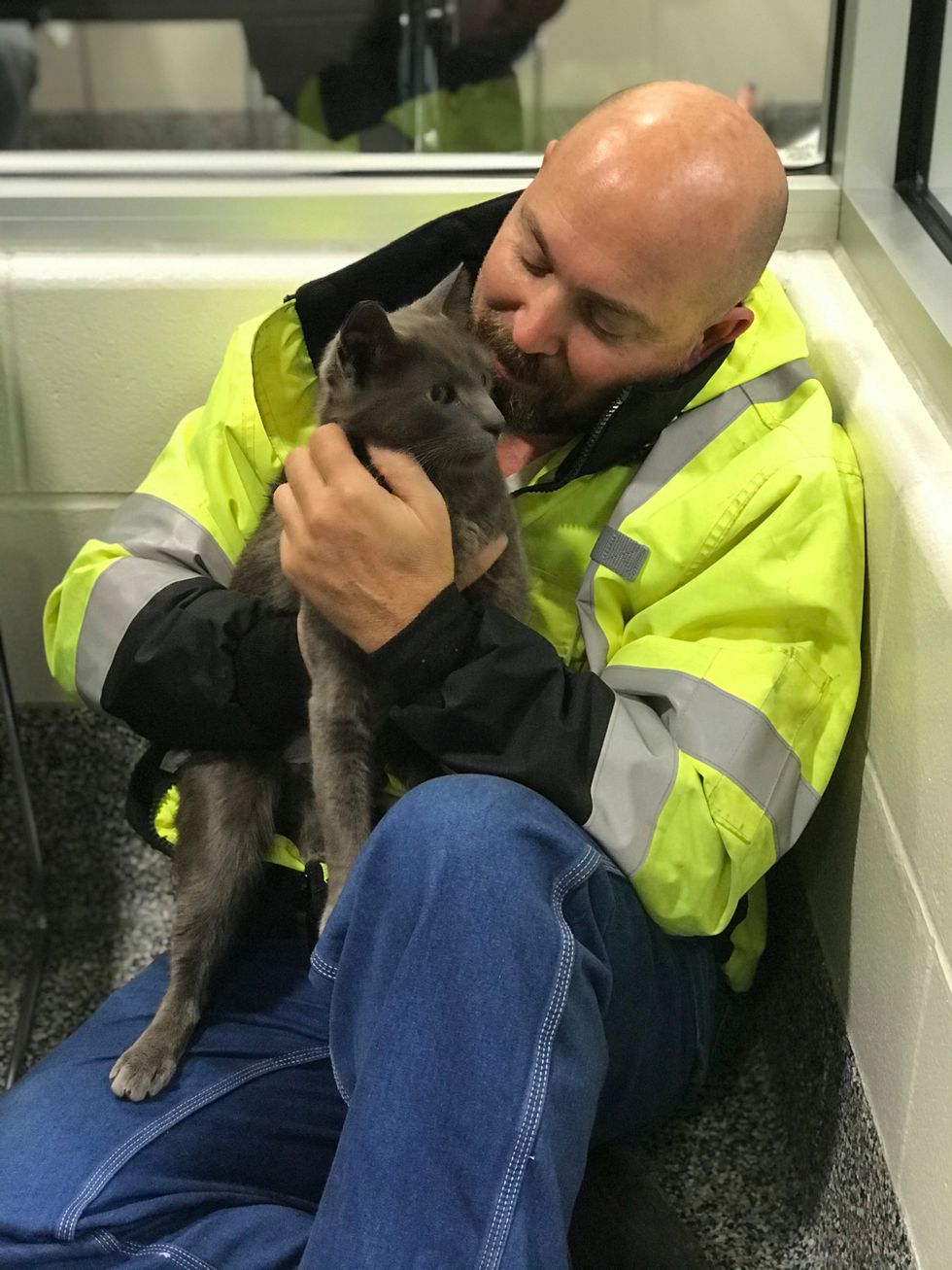