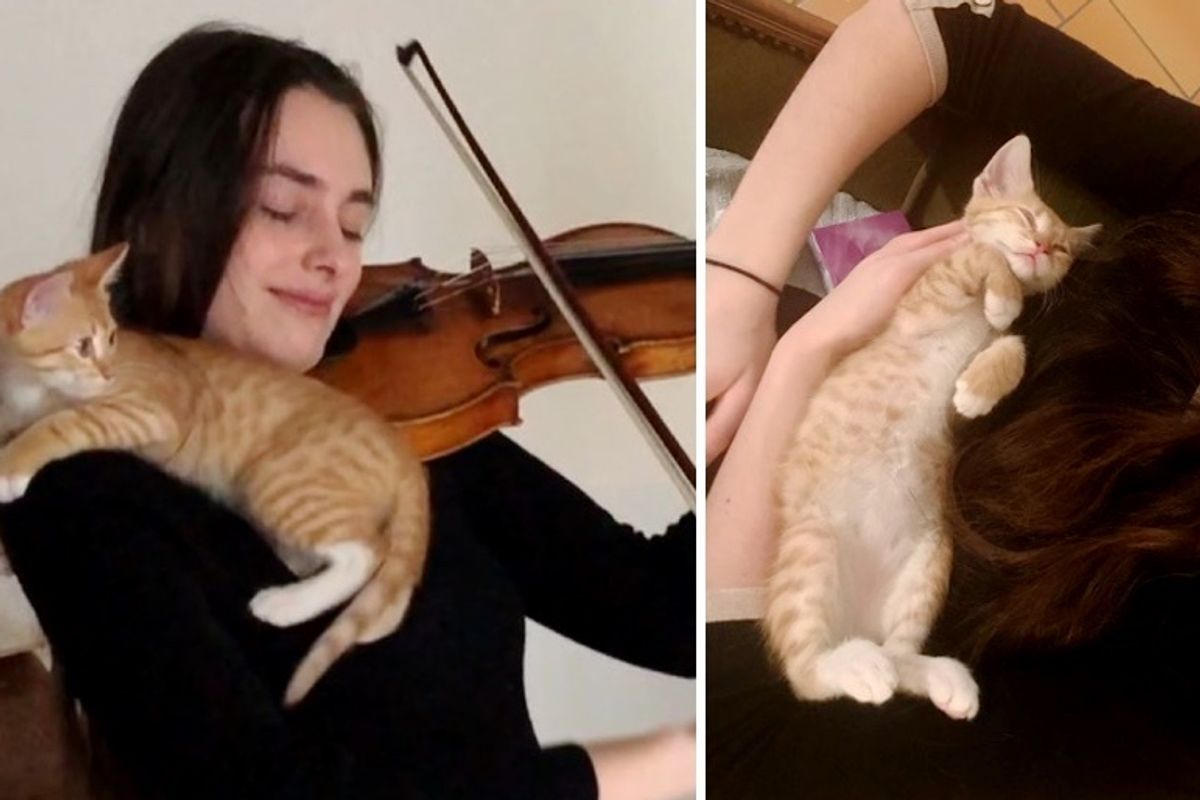 Kitten Found His Way to Violinist and Became Her Sweetest Audience

An abandoned kitten found his way to a violinist and became her most adorable audience. 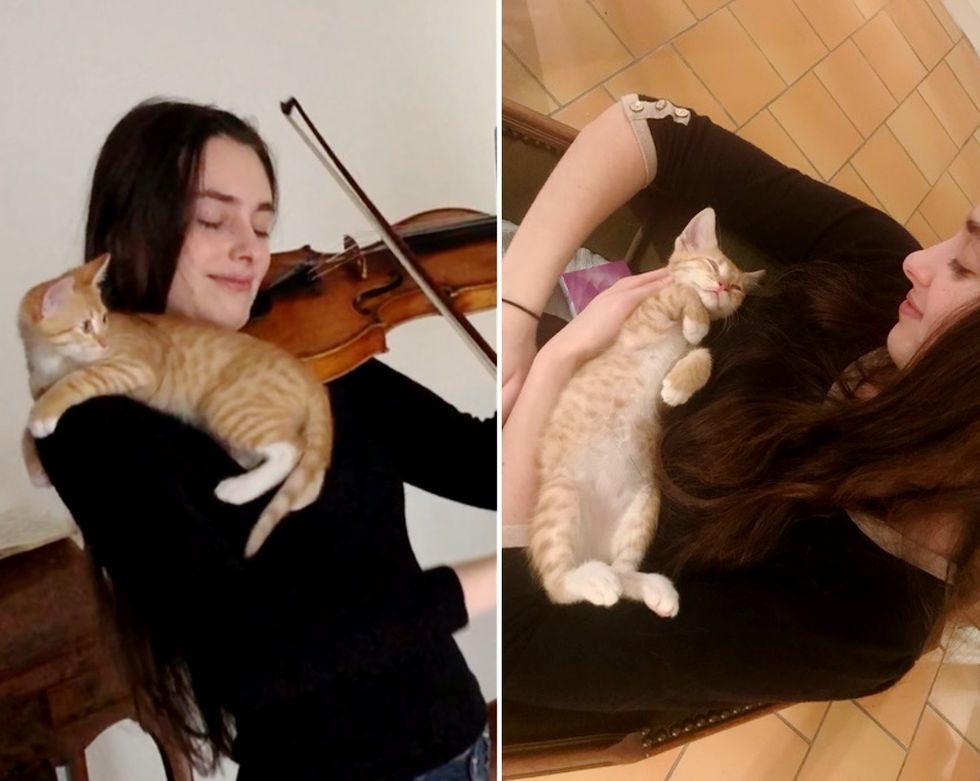 Esther Abrami, a classical violinist and a cat lover, has been volunteering for her local animal shelters. "When they have too many cats to look after, I offer my help as a foster family," Esther told Love Meow.

When La Feline Meyreuillaise, a rescue group in Southern France, reached out to her about a kitten that needed a foster home, she didn't hesitate to help. "This cat was abandoned by his previous owners who could not be bothered to look after the kittens. La Feline took them in and found foster families to care for them."

The little orange tabby was named Petit Rose, which means little pink in French. He was around 1-2 months old, an instant cuddle-bug and very curious from the start. 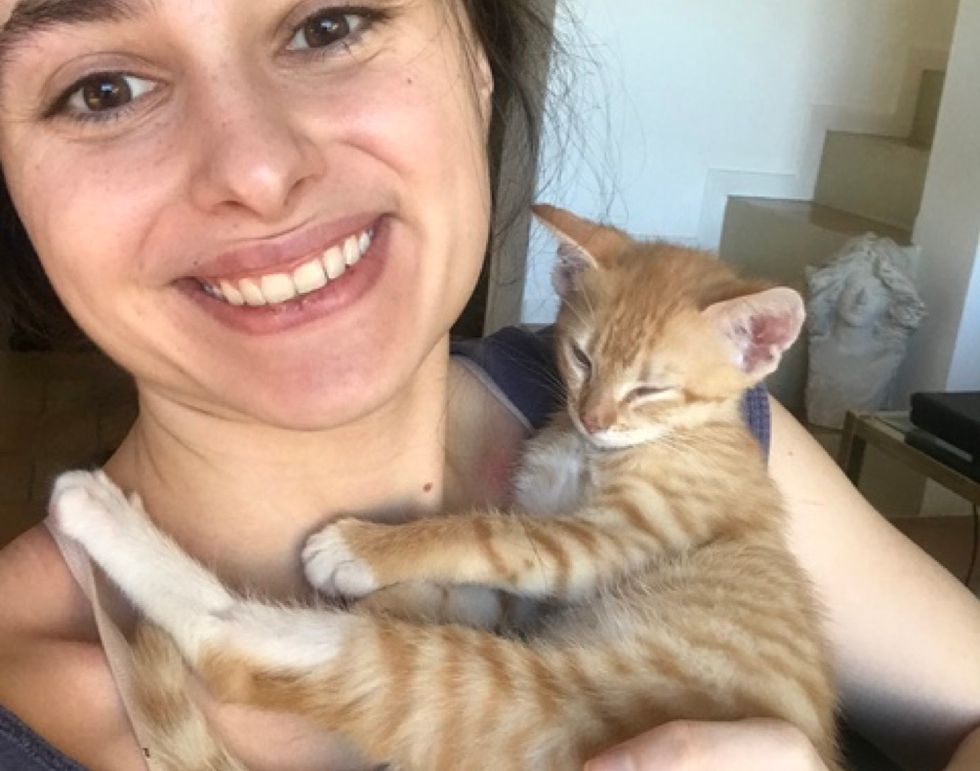 The kitten insisted on following Esther around the house and soon began to show interest in her profession.

As a violinist, Esther practices every day for four hours to refine her craft. The kitten was immediately intrigued by the sound coming from the musical instrument. At first, Esther placed him in the room next door to help him acclimate to the new environment, but the brave kitty strutted right into her office and decided to stay. 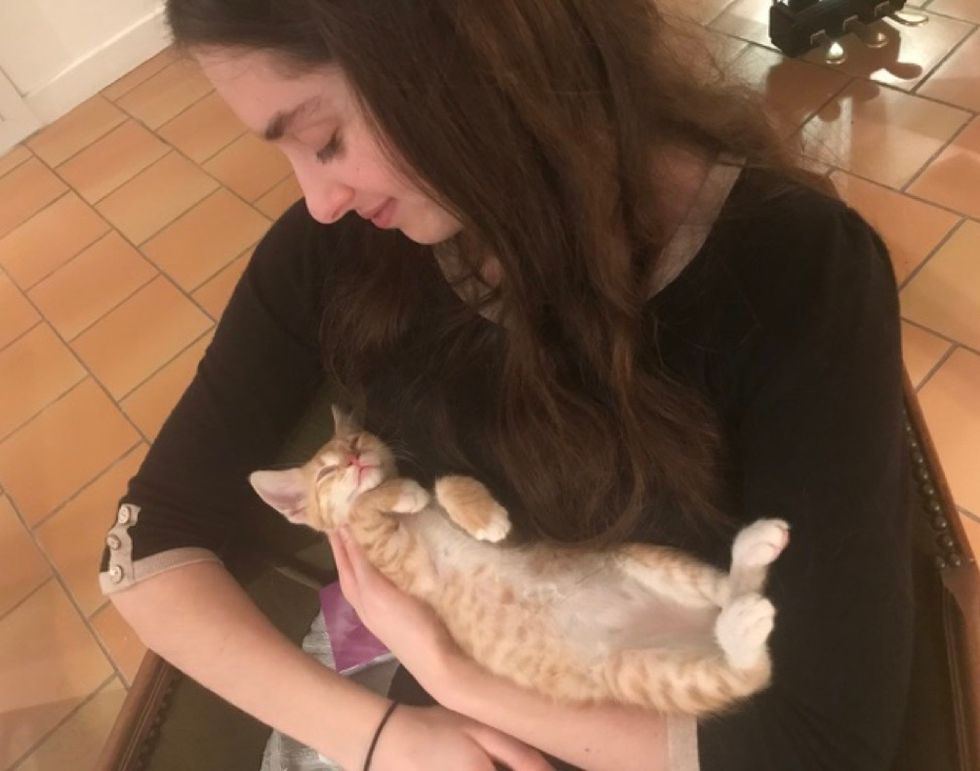 He hopped onto Esther's lap and proceeded to inspect the "strange-looking contraption." He sniffed around it as if he was trying to figure out the mechanics of it. Once he was pleased with his findings, he settled down on her lap and was ready to be serenaded.

"From the start, he was very cuddly and wanted to nap with me. Once he got more comfortable, he would follow me into every room, including the one where I practice my violin," Esther shared with Love Meow. 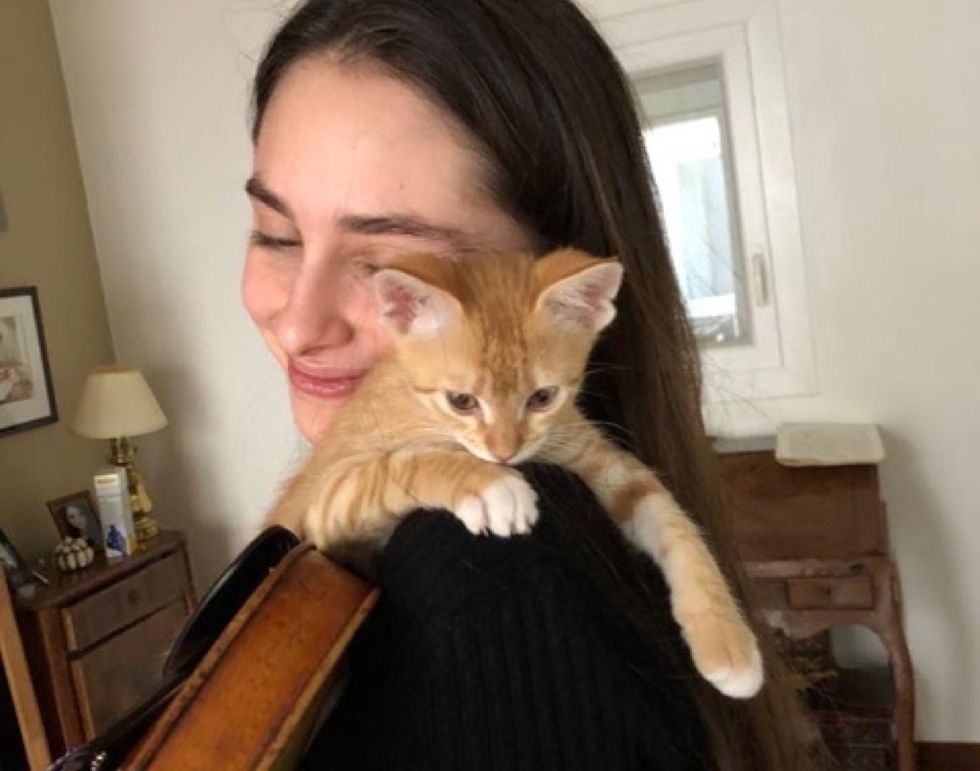 The tabby boy seemed to have a fine taste for music. He would often close his eyes, snuggling on Esther's lap, while he was being enchanted by the beautiful melody.

Sometimes, he would turn the violin box into his very own concert suite, and fall asleep while listening to a lovely concerto.

"He seemed to like it. Every time I played, he would come over and sit on my lap. Eventually, he was so comfortable that he would crawl on my shoulder while I played." 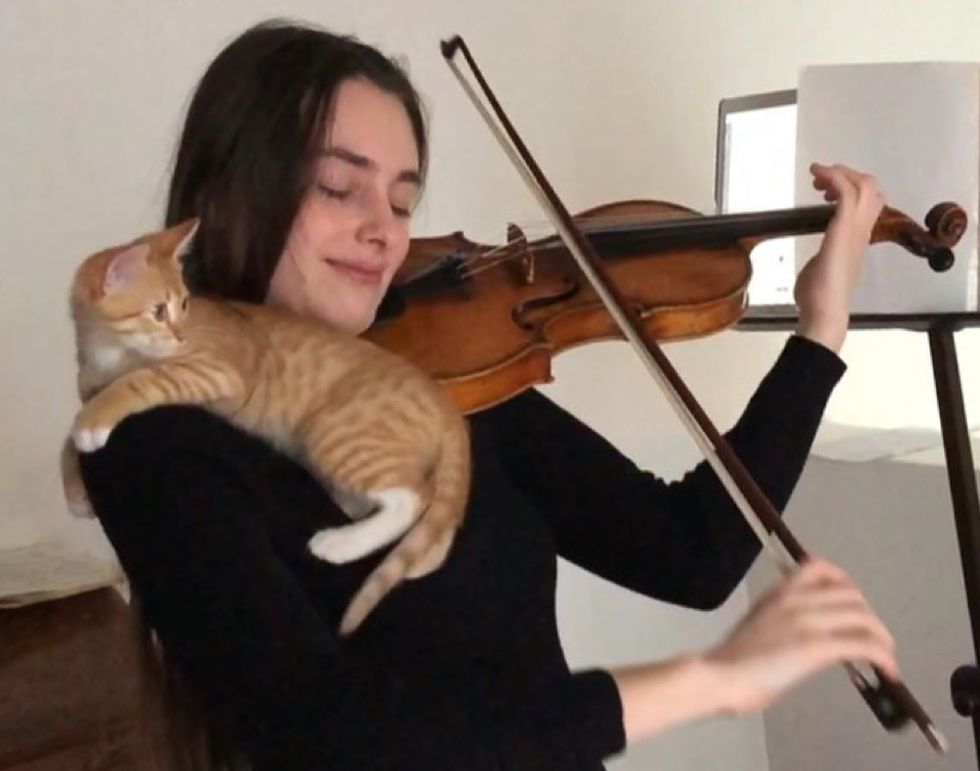 Esther has performed for many feline audiences at home, but Petit Rose is by far her biggest fan and the most musically inclined feline.

He never missed a home concert and was completely enthralled with every piece Esther played.

Due to her travel schedule, Esther is not able to have a pet of her own. She wanted to find a wonderful family that could give Petit Rose the undivided attention he so deserved.

When the tabby was ready for adoption, a family came to visit him and fell head over heels for him. They opened their home to the sweet kitty and brought something along with him. 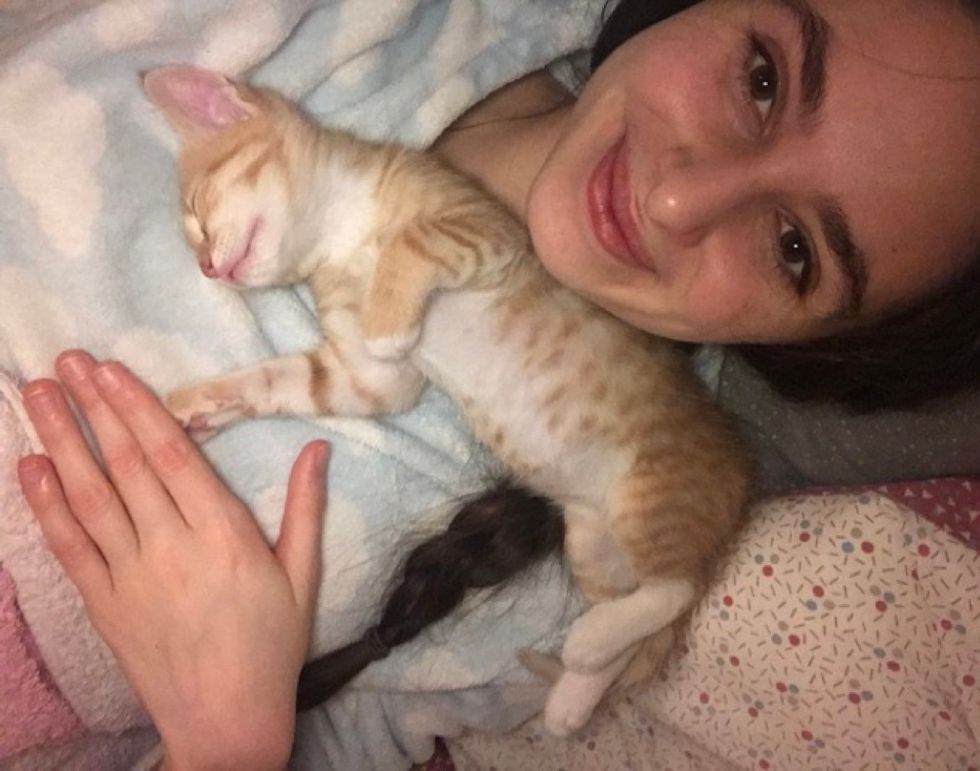 Knowing how much he adored the violin, the family plays Esther's recordings at home so Petit Rose can continue to enjoy his favorite music genre.

They also keep in touch with Esther, sending her photos and updates of her biggest fan. 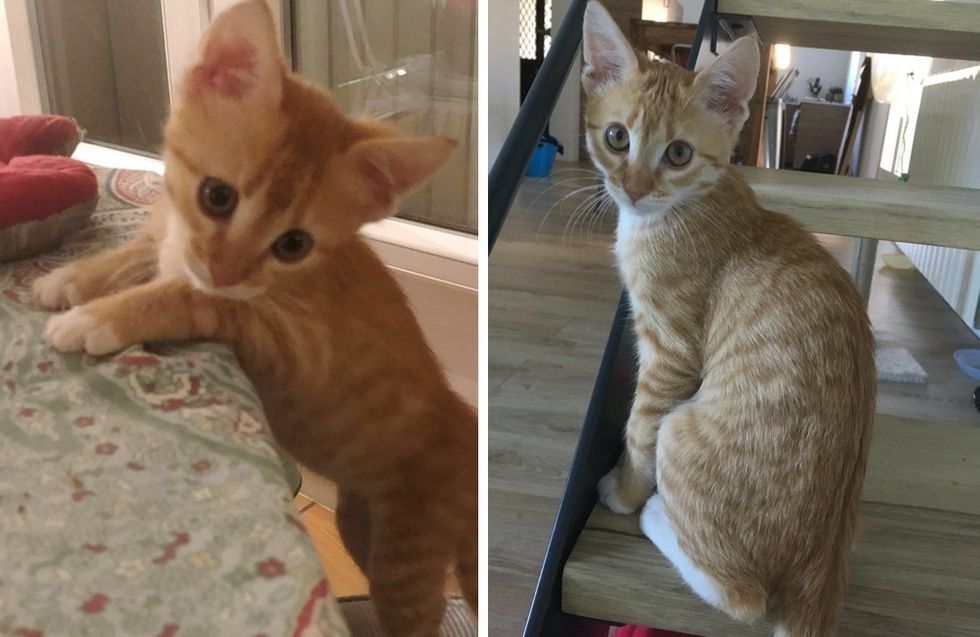 Petit Rose is all grown up now and has blossomed into a handsome cat. He still enjoys listening to violin music and is living life to the fullest. 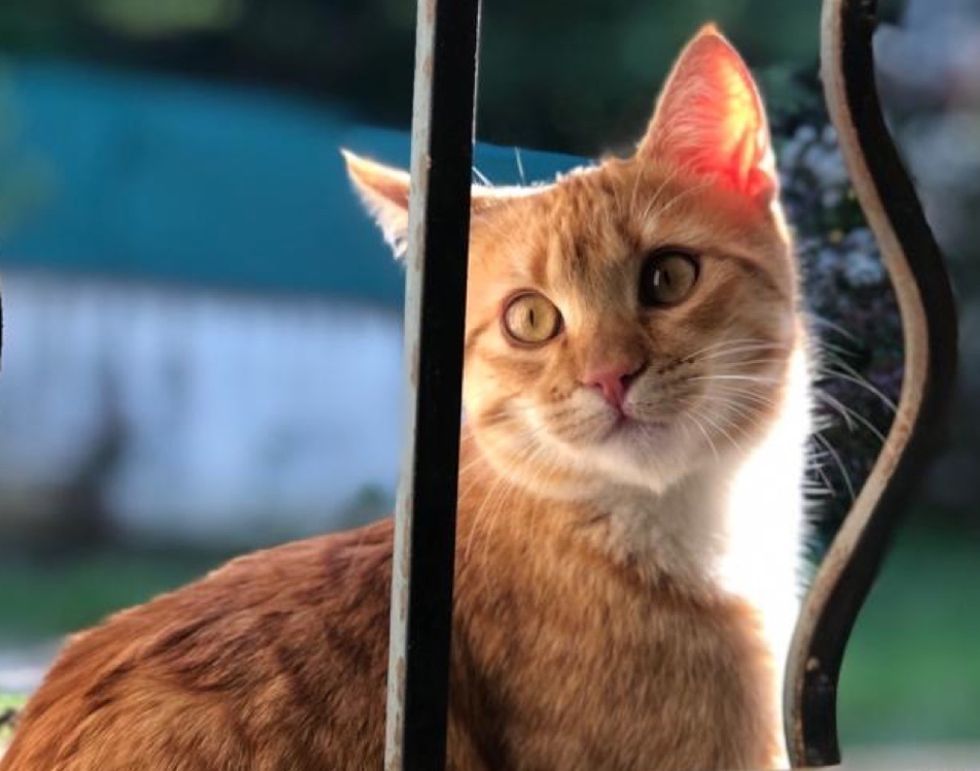 A sweet moment of Petit Rose the music loving cat.

Related story: Sweet Kitten Found in Backyard Has Her Life Turned Around by Kindness