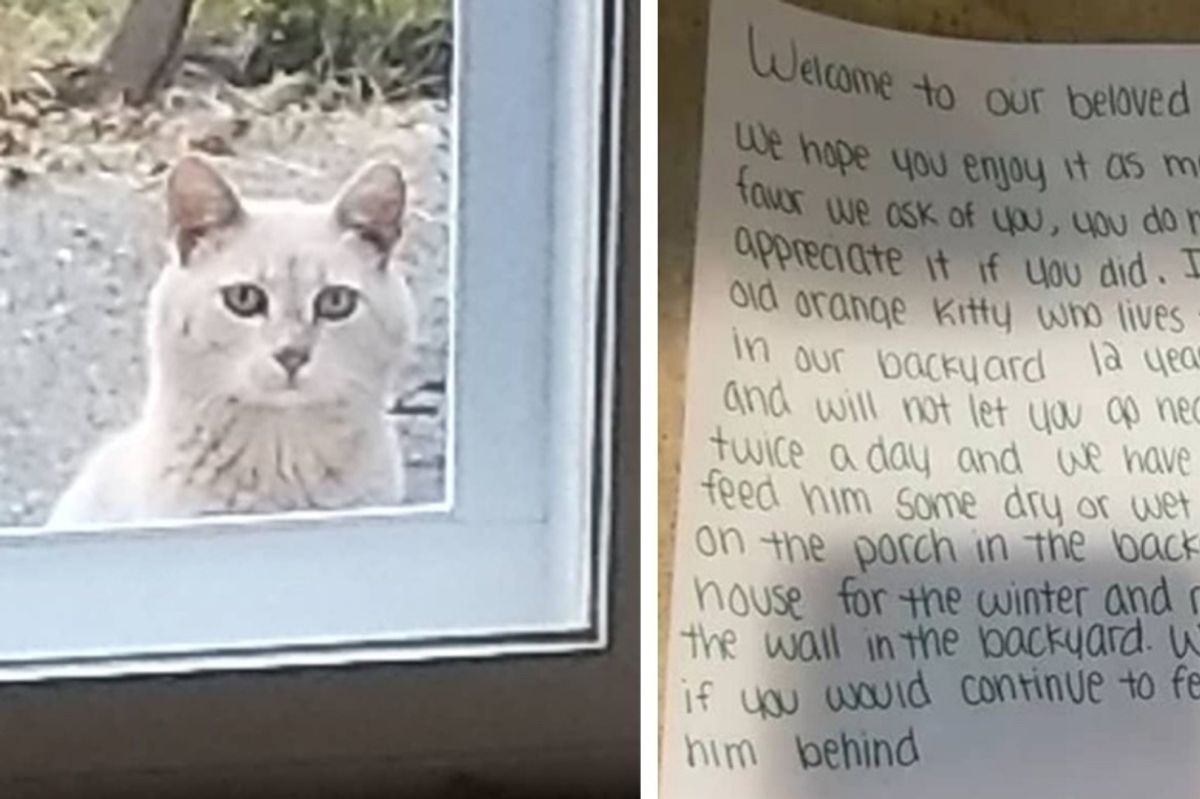 Miranda and her family recently moved into a house in Washington and was surprised to discover that their new home came with an outdoor cat who had been living there for over a decade.

They found a note left by the previous owners about the cat that they had been caring for since he was born in their backyard 12 years ago.

"There's one favor we ask of you… In the backyard there is an old orange kitty who lives there… He has an injured paw and will not let you go near him. We feed him everyday twice a day and we have for years now," they wrote on the note. "We bought him a little house for the winter and rainy days, that is placed against the wall in the backyard."

The previous owners asked if Miranda and her family could continue to look after him.

By the time they finished reading the note, lo and behold, the said cat was right there peeking through the glass door, ready for some snacks.

"He was sitting at the door waiting so we gave him some food and water. He was cautious but I think he understood that we weren't a threat," Miranda told Love Meow.

They named him Razum Dar, Raz for short.

Miranda has a big family with five other felines. When they saw the little guy looking at them from their yard, they simply couldn't say no.

Raz has always known the backyard as his home. He comes in randomly throughout the day. "He hangs out in the yard every day, and if we don't see him during the day, we see him at night."

The kitty has a rock in the backyard that he claims as his throne, and if he wants a change, he will hop on one of the chairs outside to chill and relax.

He spends ample time in the yard sleeping or watching the day go by.

Miranda has been working on gaining his trust as Raz is now part of their family.

"We already have five cats so I guess, we have six now," she said.

A few weeks after they moved in, Raz decided that he didn't need to run away when his food providers came out with the goodies.

"There was a moment where he paused like he was trying to decide whether he was going to run or not."

When Raz let his humans share the yard with him while he enjoyed his food, the family was overjoyed and hopeful that someday they could all live under the same roof together.

Not only do they want to provide him food, but also the medical attention he needs and the comfort of a loving home.

Since early last month, Raz has really warmed up to his new family. "He's a lot more comfortable with us. He lets us sit outside while he eats," Miranda told Love Meow. He even meows to let them know that it's time for food.

Watch Raz in this cute video:

@wottrns on Instagram: “He let us sit outside and talk while he ate this is a really big step #catsofinstagram #cat #Raz #kitty”

"He's met all of the other cats through a screen door and they're very friendly to each other. There's been no growling or hissing, and they mostly touch noses and smell each other through the door."

Raz and Smokey, friendship in the making!

Miranda and her family adore cats but they never expected to move into a new home with a sweet feline tenant waiting for their arrival.

"We have five cats who are spoiled so he will be loved."

Related story: Cat Brings Flowers to Neighbors From Her Garden Regularly Since Spring