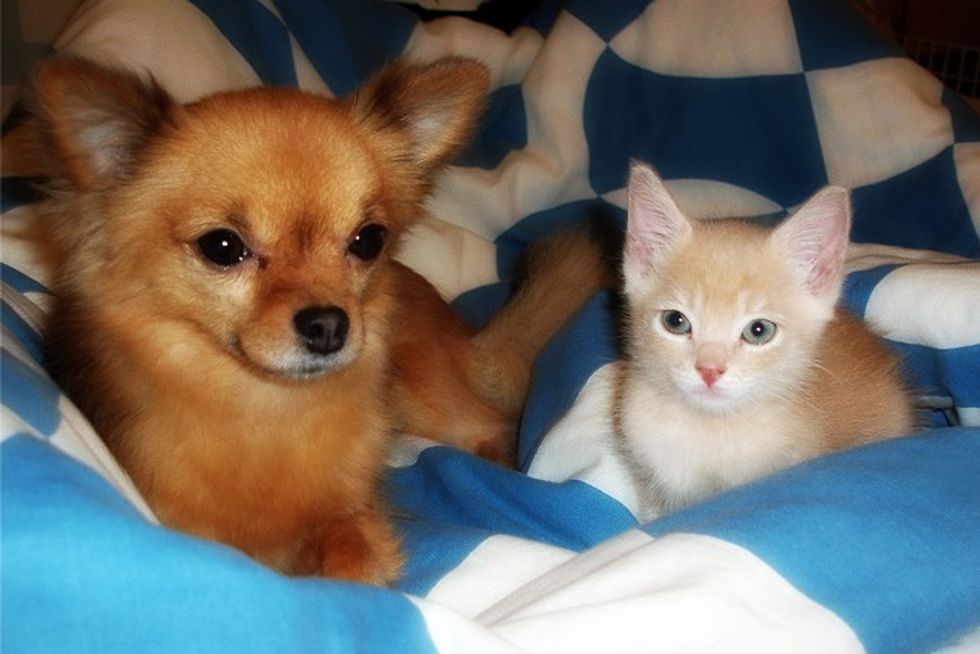 Friendship Between Tofu the Cat and Jemma the Pup

Three years ago, we decided that since our dog was lonely during the day, we wanted to get a friend for her to keep her company. Since we were not able to care for another dog as it would be too much work, we decided on a cat. When we went to visit the kittens, I sat down on the floor to watch them play. One little cream kitty walked up to me, climbed onto my lap, and started playing with my hair. When touched, he started purring non-stop. All the other kittens were oblivious to my presence, each doing their own thing. I decided that the cream kitten on my lap was mine.

My boyfriend named him 'Tofu' because just like the food, he will fall over when touched. There doesn't seem to be any resistance as he will just flop over onto his side and let you do whatever you want to him. He is very docile and mellow. Although larger in size than his older dog sister Jemma, he is very submissive and always lets her have her way. He sleeps on the bed beside me every night, alongside with Jemma. When we come home, he goes running to the door to greet us. He has learned many things from her, just like a little brother learning from his big sister. He was less than half the size of her when we first brought him home, but he is now bigger than Jemma. She helped us raise him into the good boy he is today by teaching him what is right and wrong.

For example, as a kitten, he had a bad habit of biting my ankles whenever I walked past him. I would often cry out in pain to let him know that it was painful and not to play so roughly. That didn't work, but Jemma soon associated my crying with Tofu play-fighting me, so whenever she saw the tell tale signs of an attack coming, she would run to stand in the way, letting him know biting ankles was wrong. He quickly learned soon after. He no longer bites ankles :)

He looks up to his big sister a lot because he is always watching her carefully. If something is okay with her, then he knows it will be fine with him, too. They have a special bond, even if there is sibling rivalry (over food!) sometimes. They are always together.