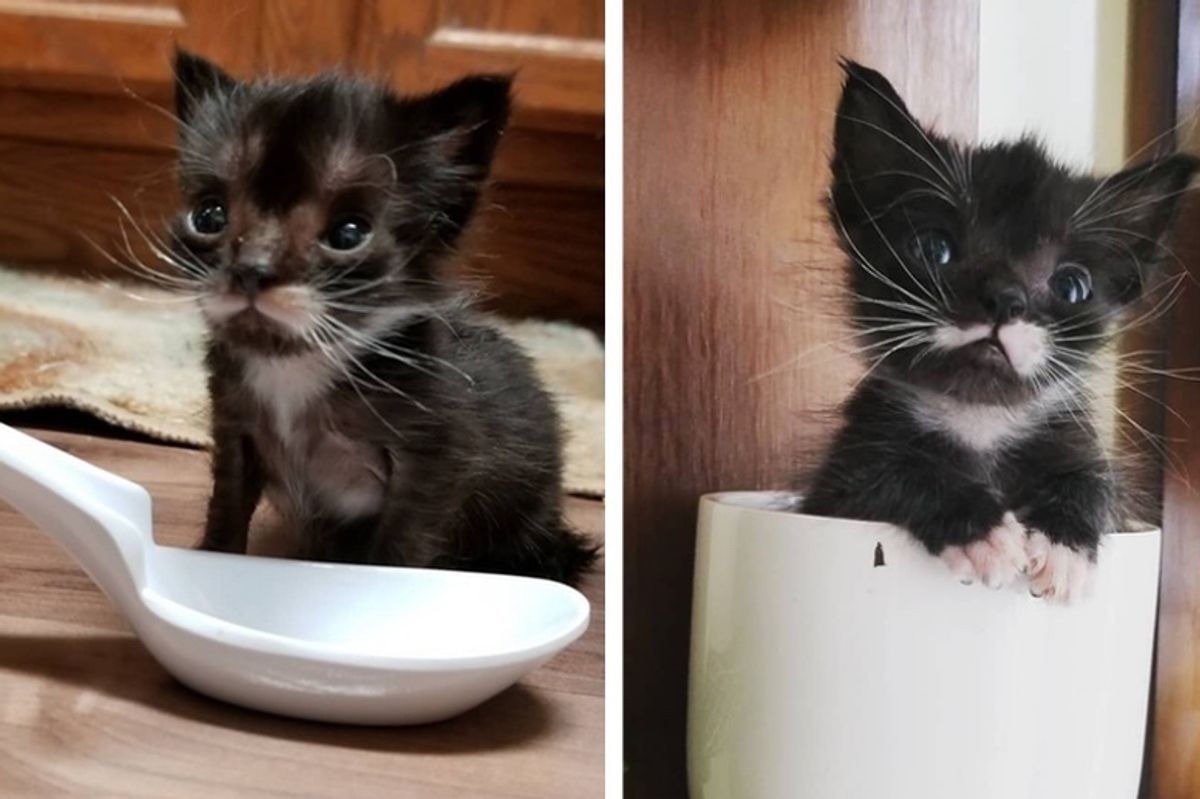 Francis the kitten was three weeks old but only weighed four ounces (113 grams), the size of a newborn. The shelter that had taken him in, knew something was not normal.

At just a few weeks old, he was the size of a pho spoon. 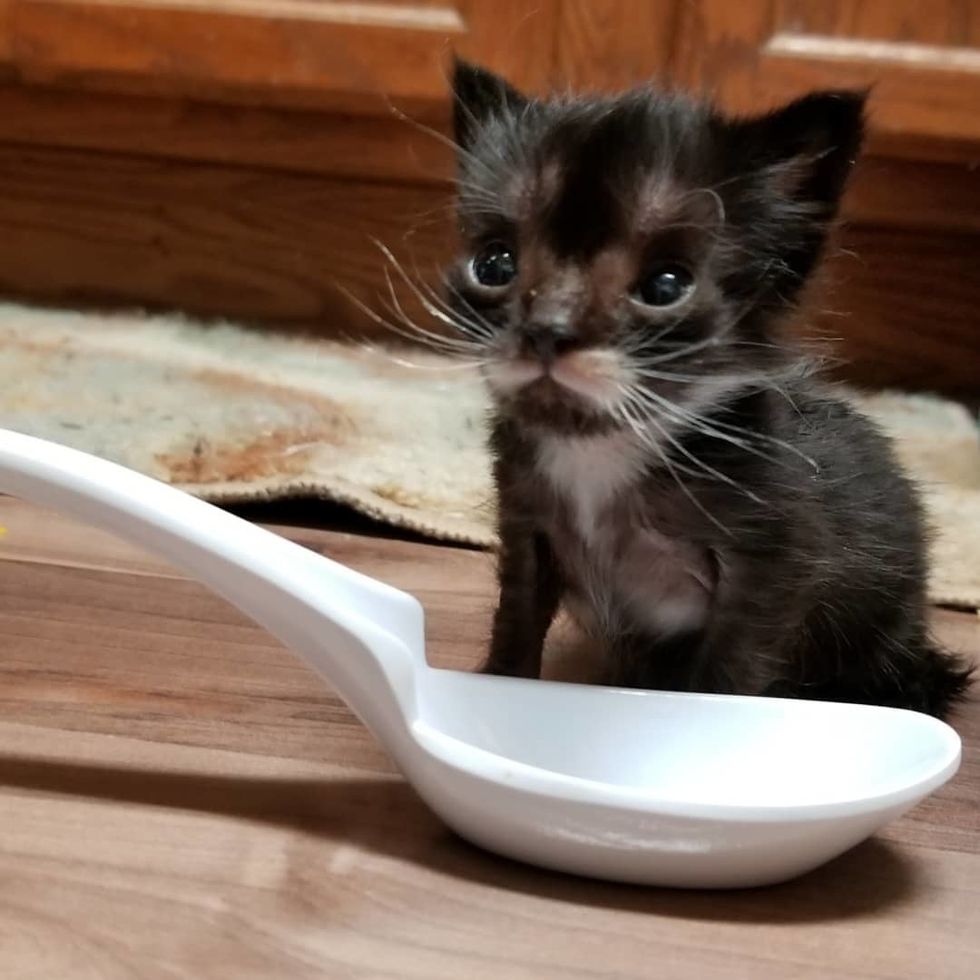 They brought the kitten to NOVA Cat Clinic where Ellen Carozza, Feline Licensed Veterinary Technician, took over to foster him as he needed special care.

Francis had a large head compared to his tiny body. "His siblings weighed in at 10 ounces and more, but he was just four ounces," Ellen told Love Meow.

Upon their initial exam, they discovered that the tuxedo boy had a heart murmur and was losing a bit of hair. They went on and did two more tests for the kitten to confirm his diagnosis. 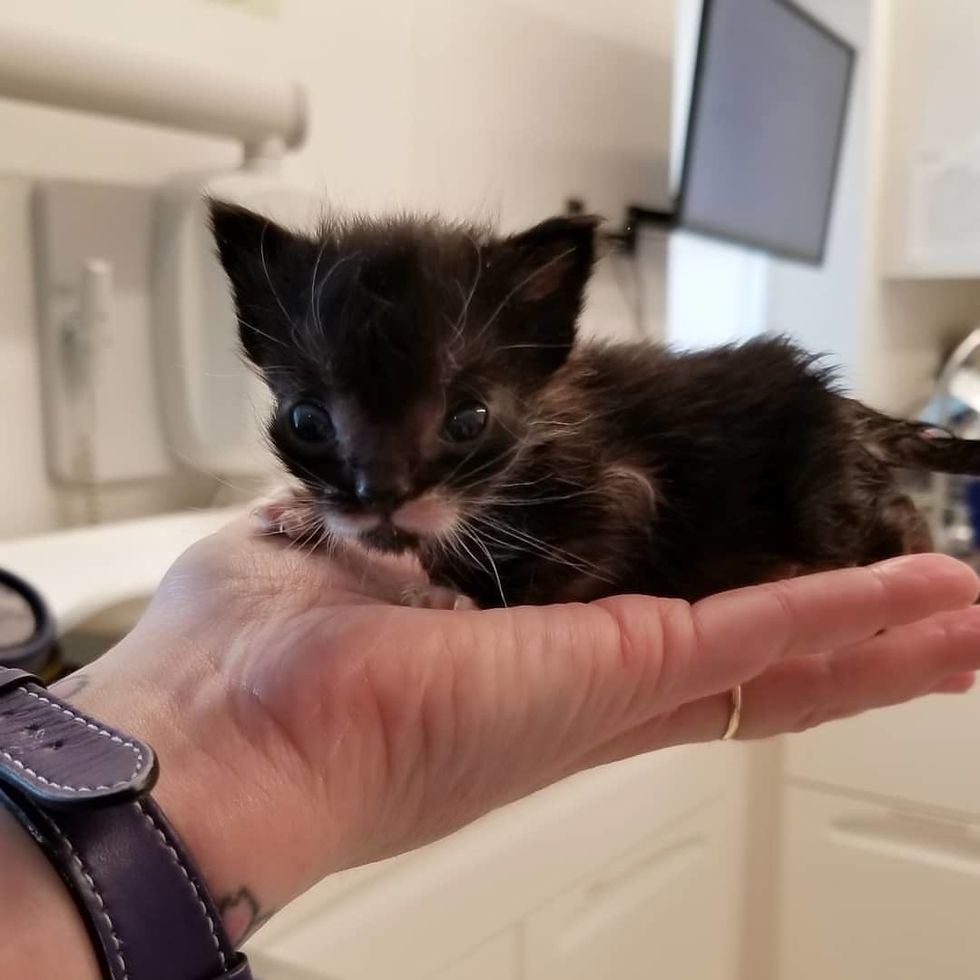 From the start, little Francis never let his size slow him down. He was a great eater and would keep meowing until Ellen picked him up and cuddled with him. He was equipped with a tiny but powerful purr motor.

Francis had to be bottle fed around the clock. When he was not eating, he was snuggling with Ellen who brought him to work to keep up with his feedings and carried him in her pocket as he demanded her undivided attention. 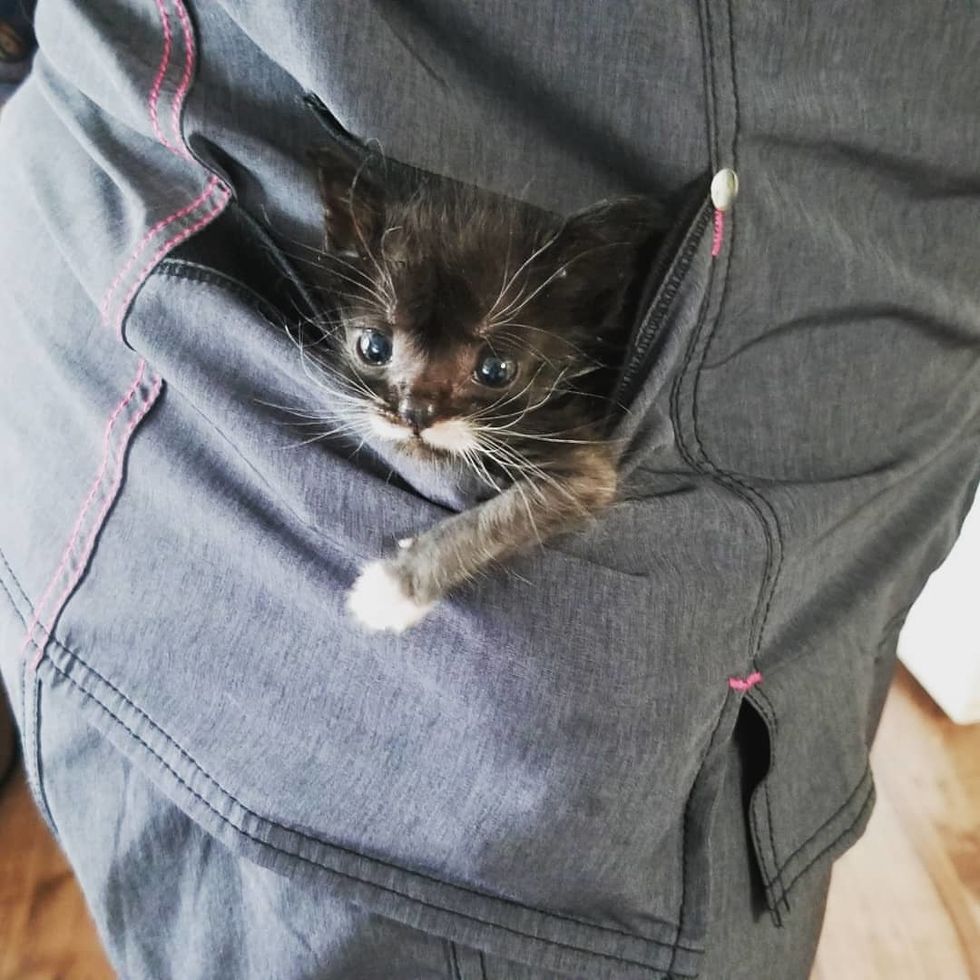 Ellen's resident cat, Benny, became a nurturing foster dad to the mini kitty. He would bathe the little guy after he finished eating and watch him as he learned to use the litter box and took his first bite of solid food.

Here's Francis sitting next to benny. (Scroll down for video) 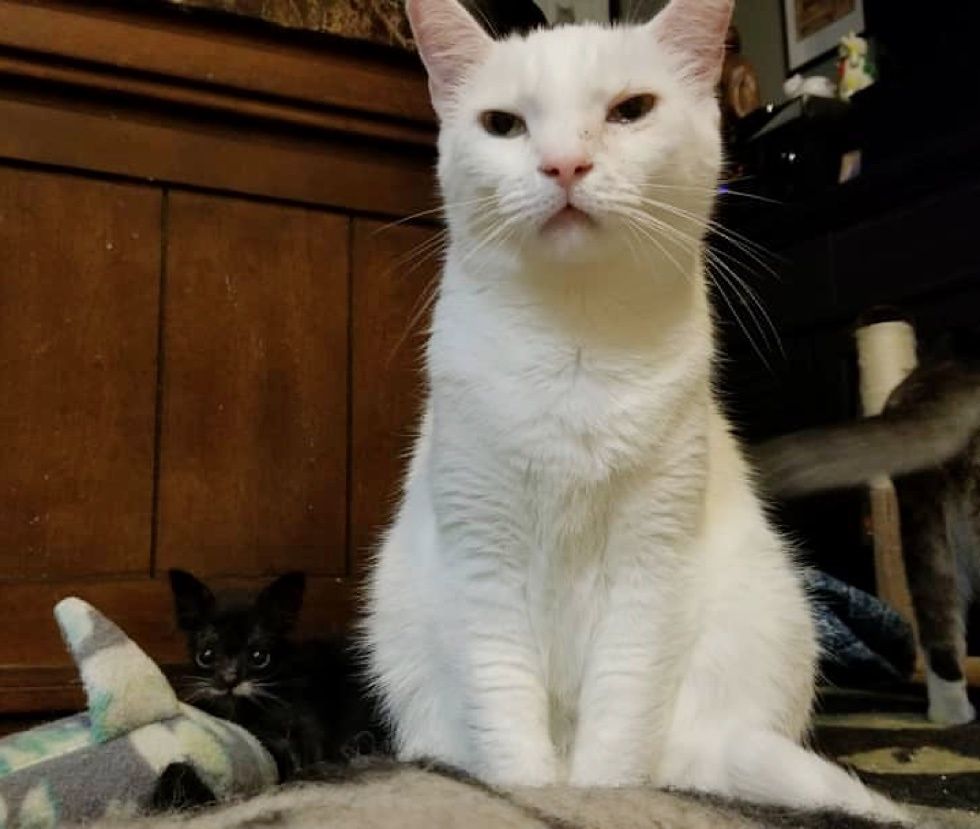 When Francis tried kitten wet food for the first time, he scarfed it down like a champ.

A huge milestone for the little miracle kitten. 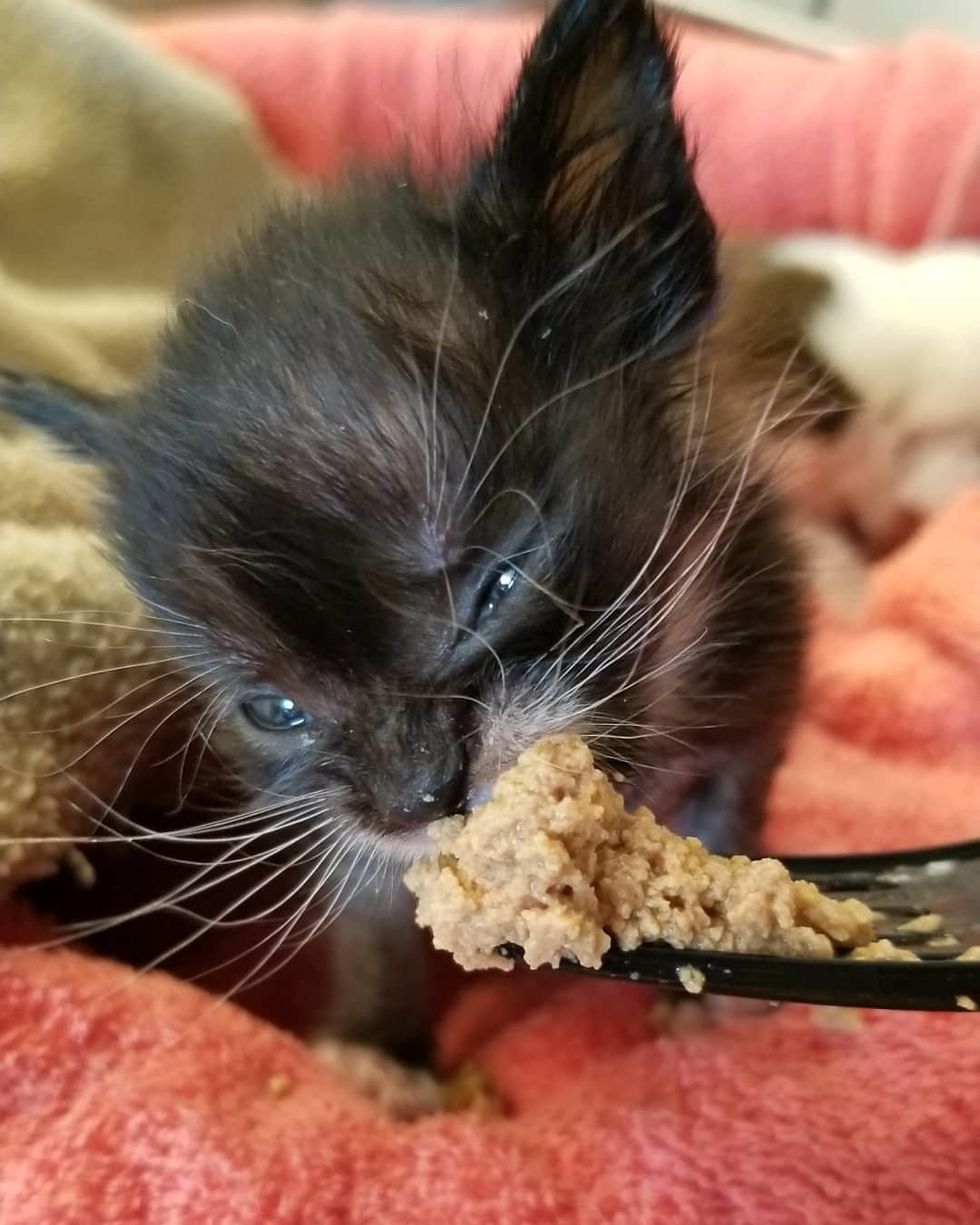 "After speaking to several specialists, he is not hypothyroid due to confirmed additional tests but may have a growth hormone deficiency," Ellen said.

"He has multiple issues we are working on, not just him being small." 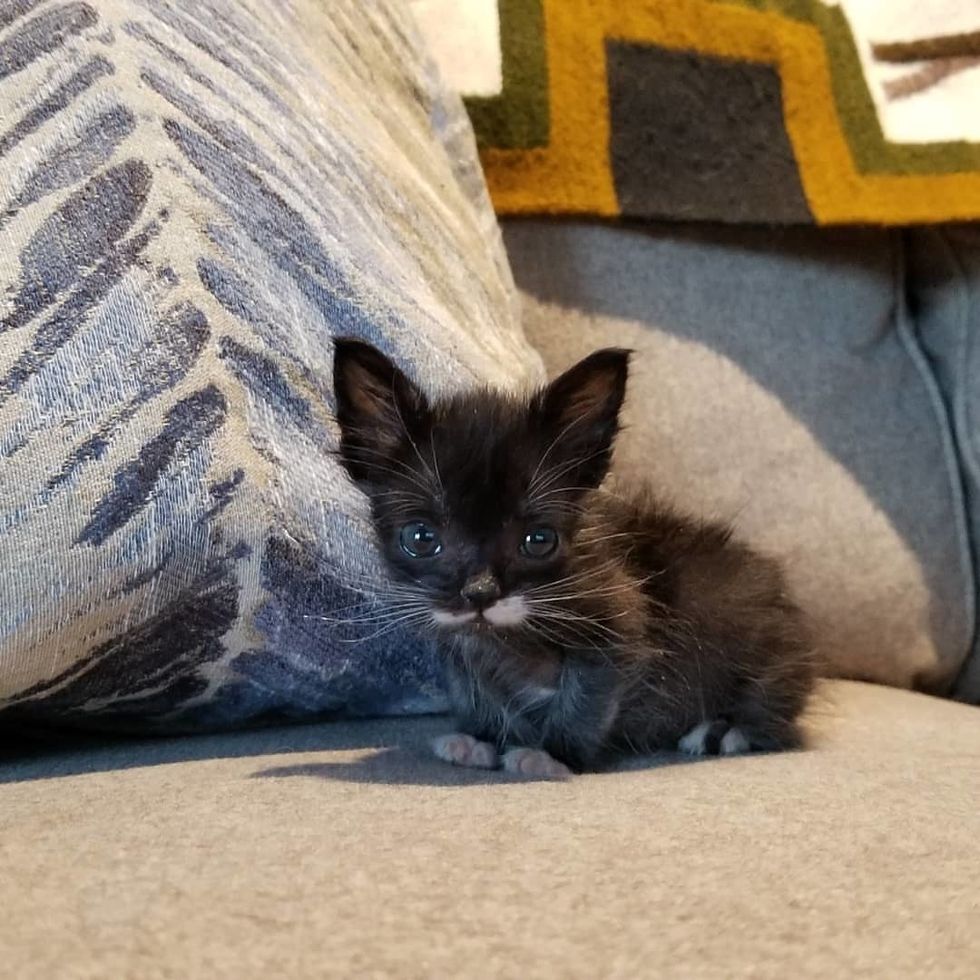 At six weeks old, Francis was about the size of a 3-week-old kitten. He was very small for his age but the tuxedo boy is a fighter. 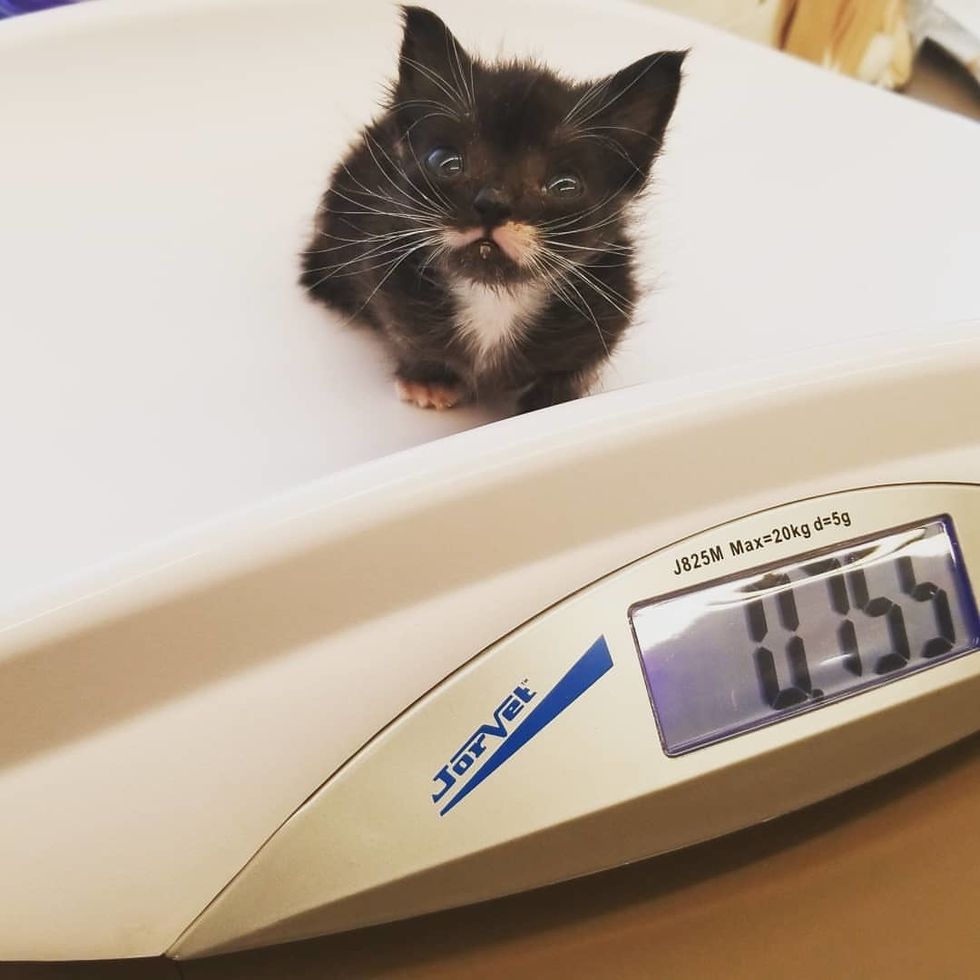 Francis has a big voice and tries so hard to be a big boy. 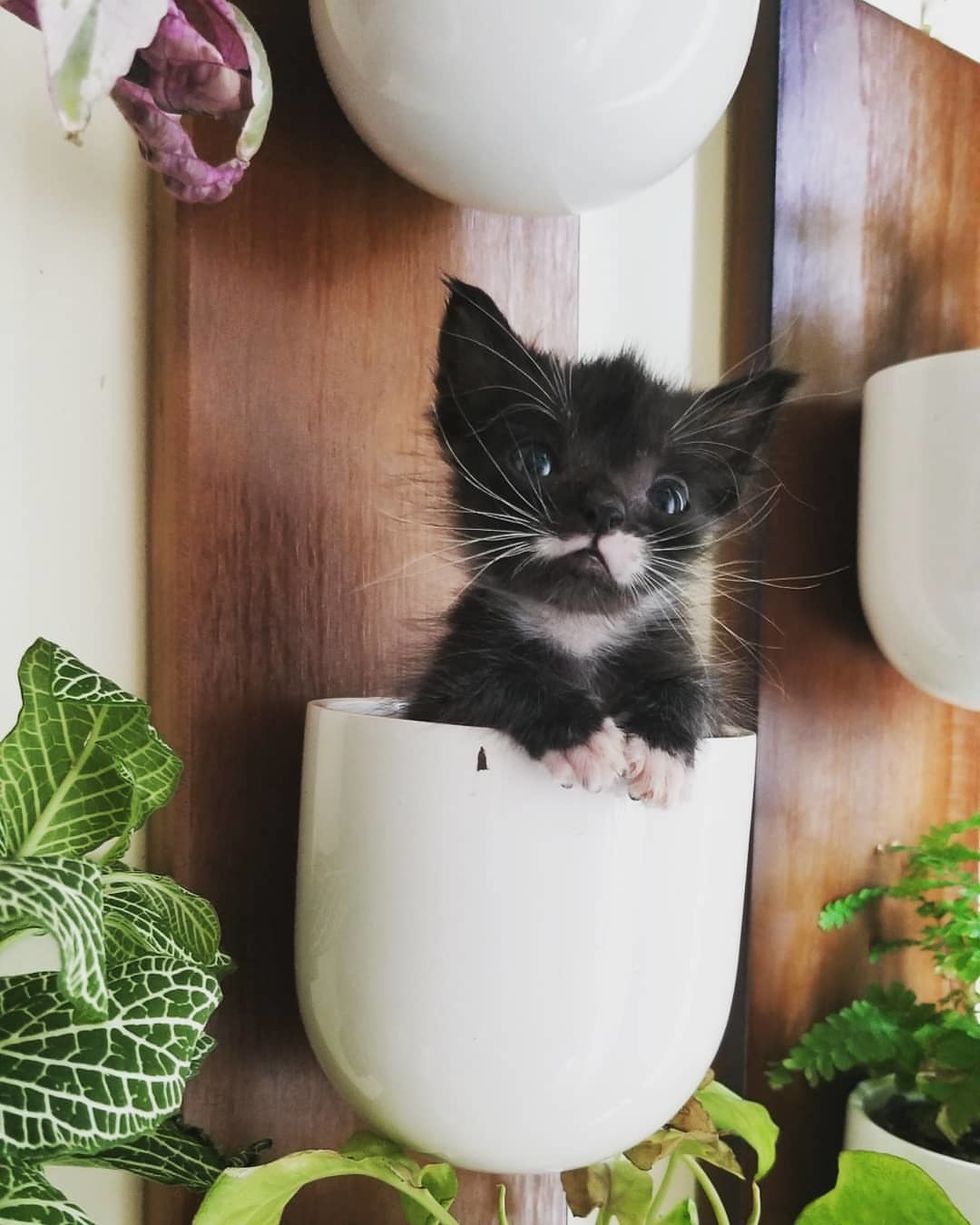 A week ago, Ellen found the perfect match for the little tuxedo.

He will be going home with a member of Ellen's family once he's ready. 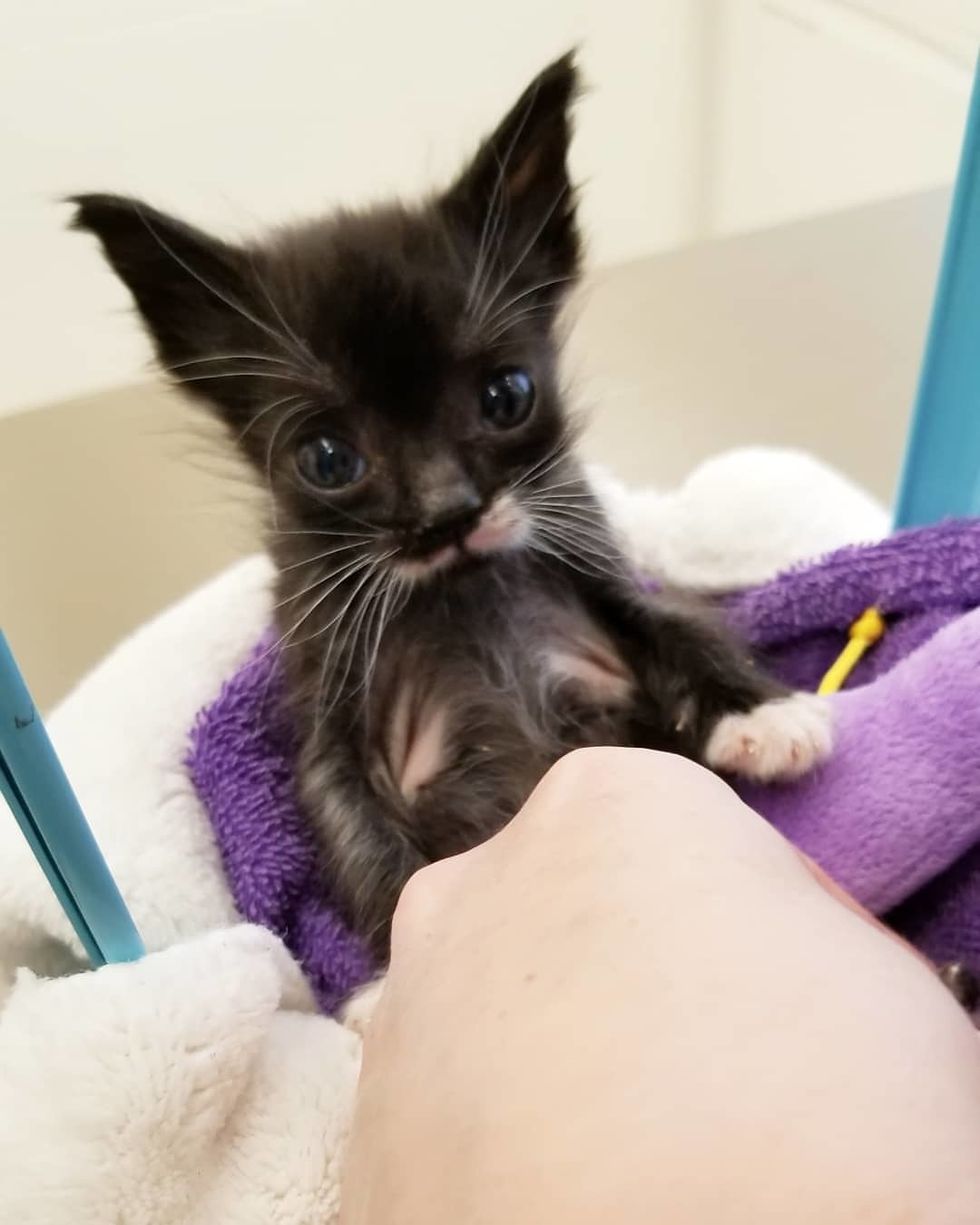 Francis is getting bigger so they have upgraded his bed. 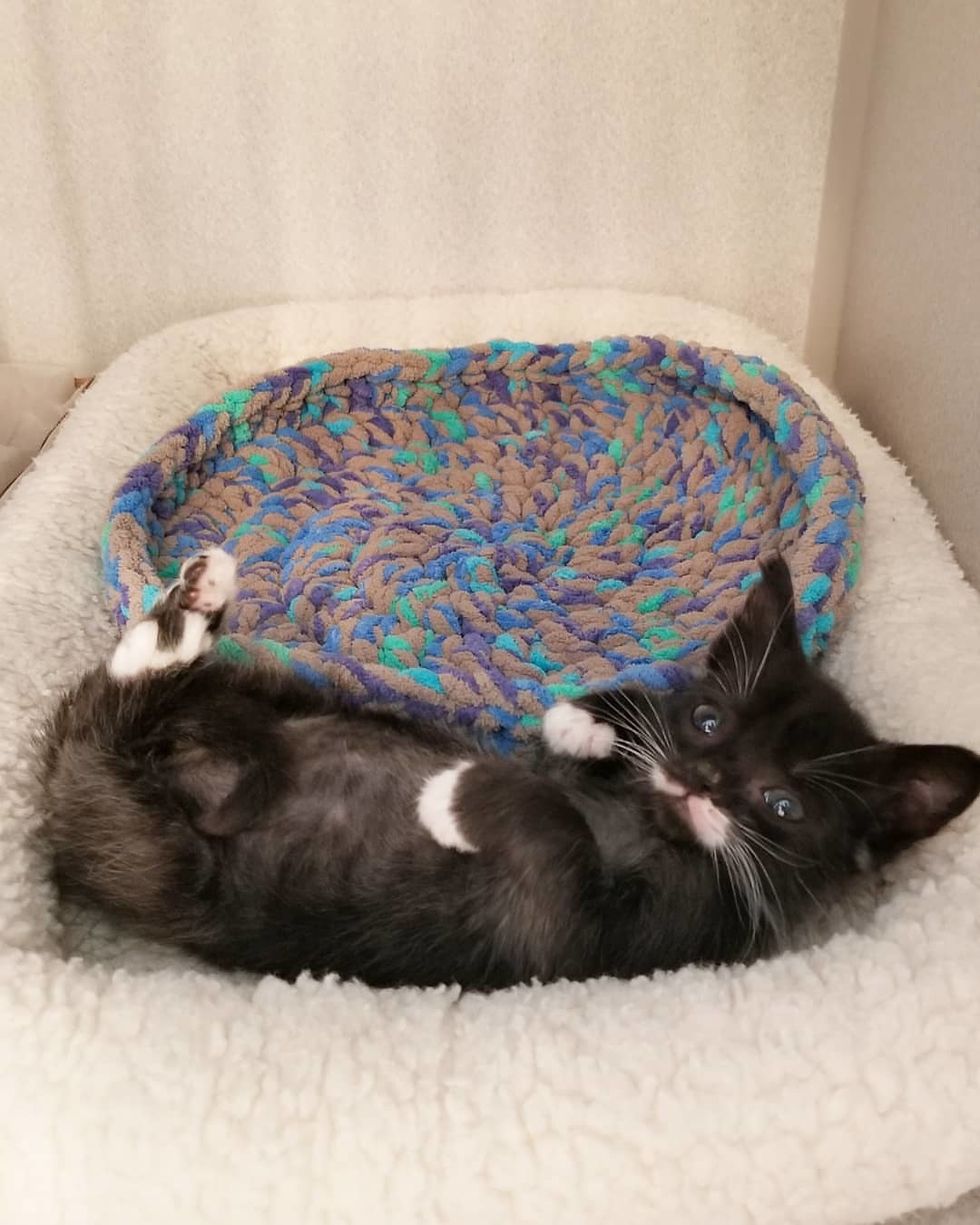 At eight weeks old, the sweet kitten with the perfect mustache has really blossomed.

He went from a kitten, the size of a spoon, to now a handsome boy wearing the most dashing tuxedo. 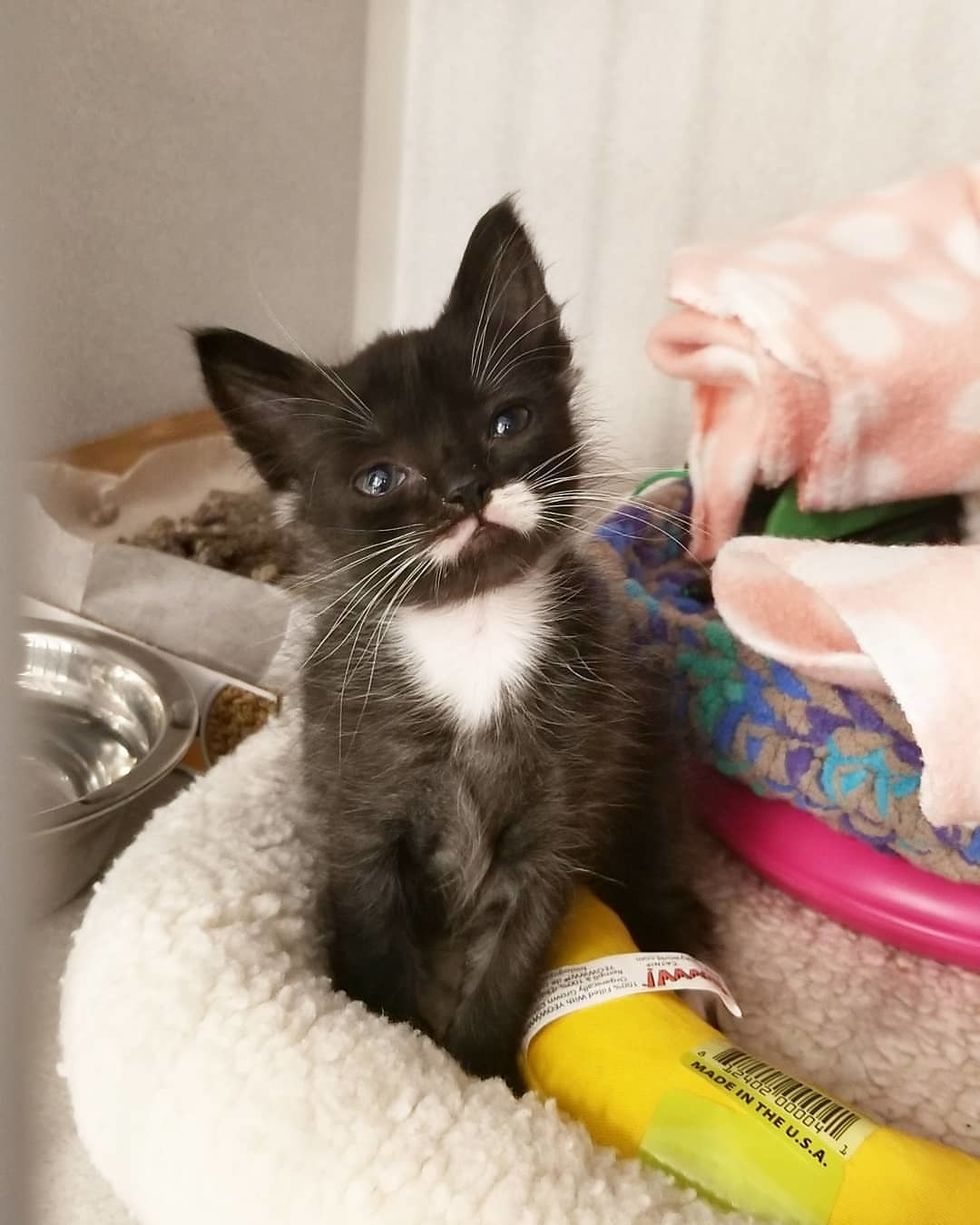 "Patience, perseverance and patient advocacy saved his life. Never give up on your most difficult cases, someone is out there to help you," Ellen wrote. 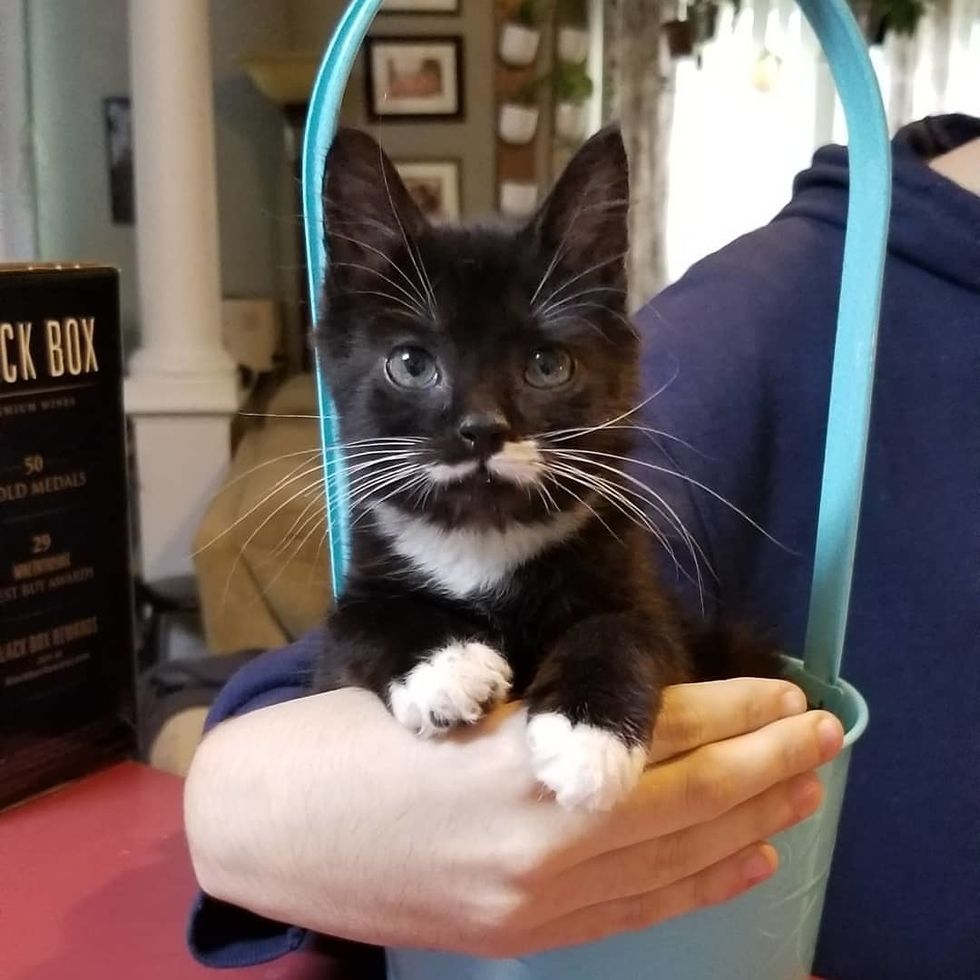 Francis came to the veterinary clinic as a challenging case, but they never gave up on him! 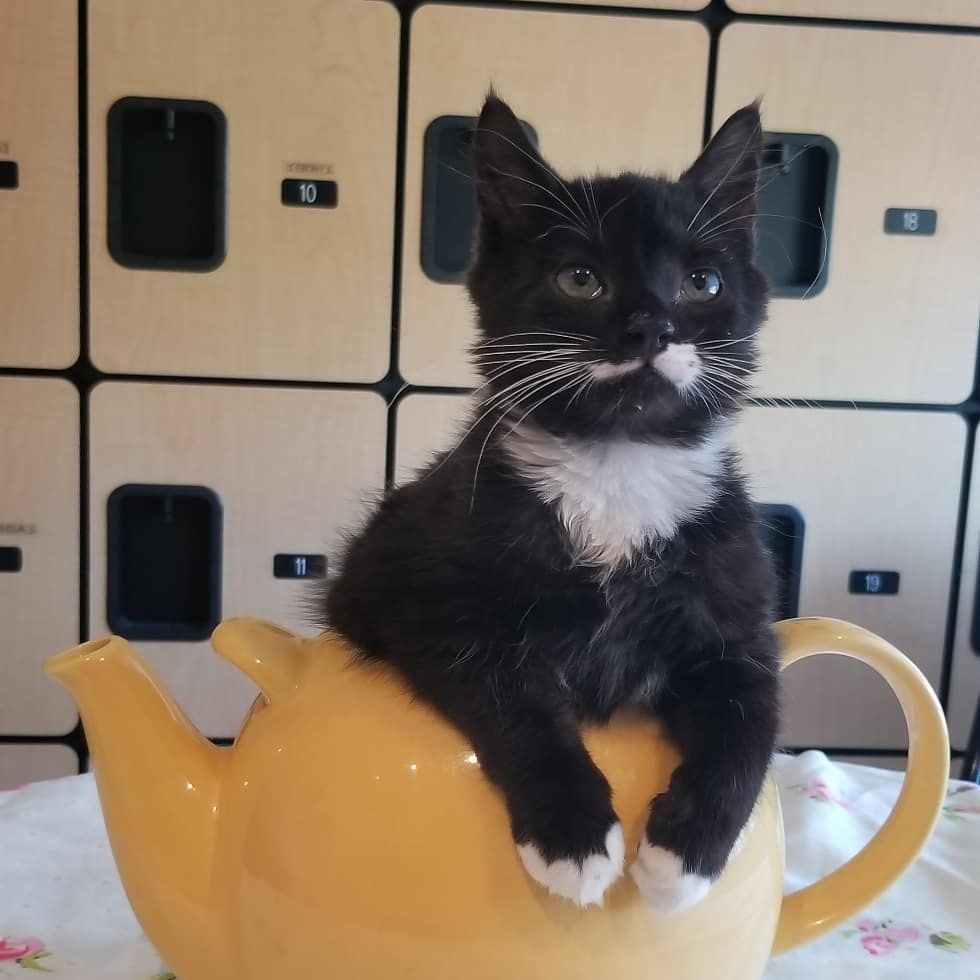 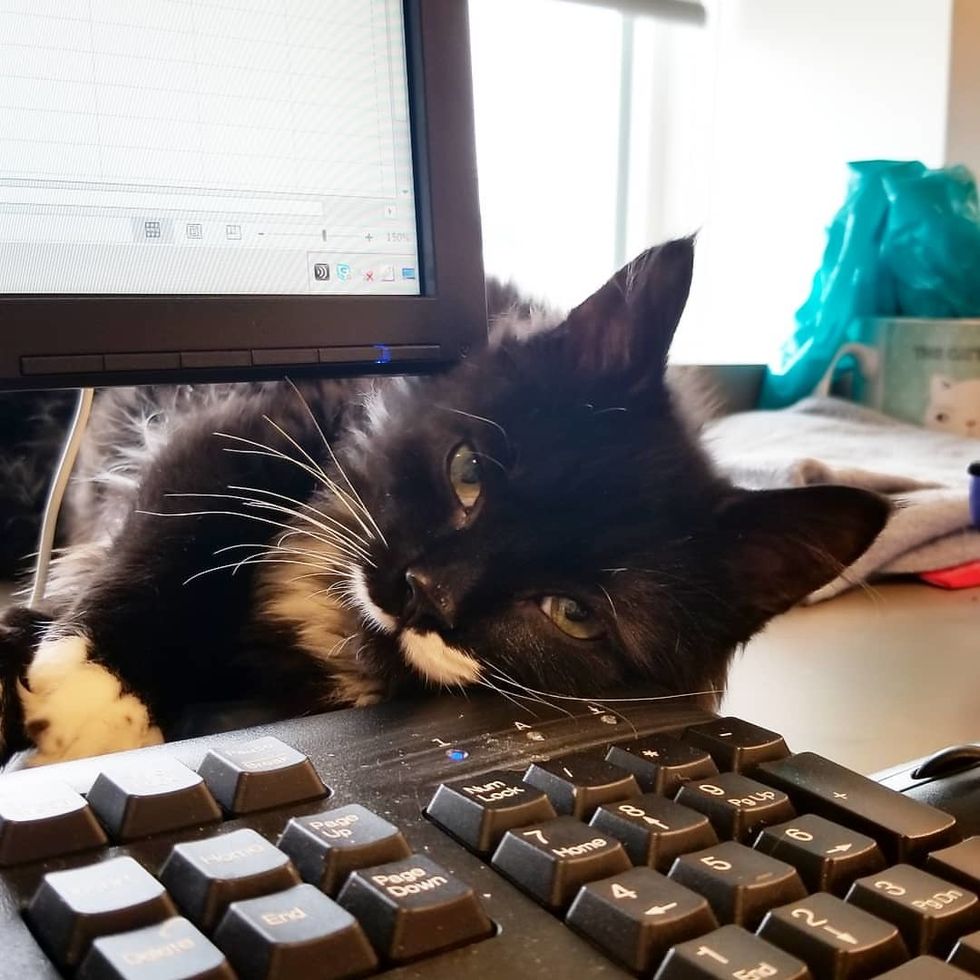 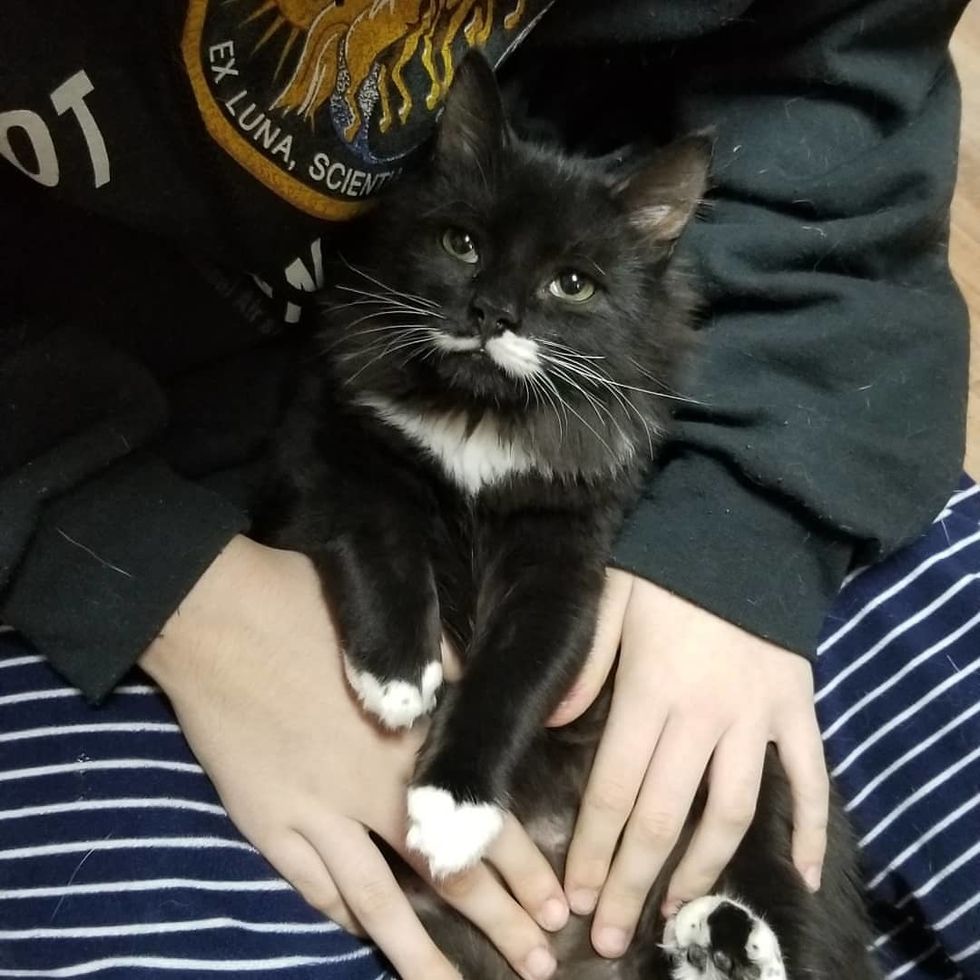