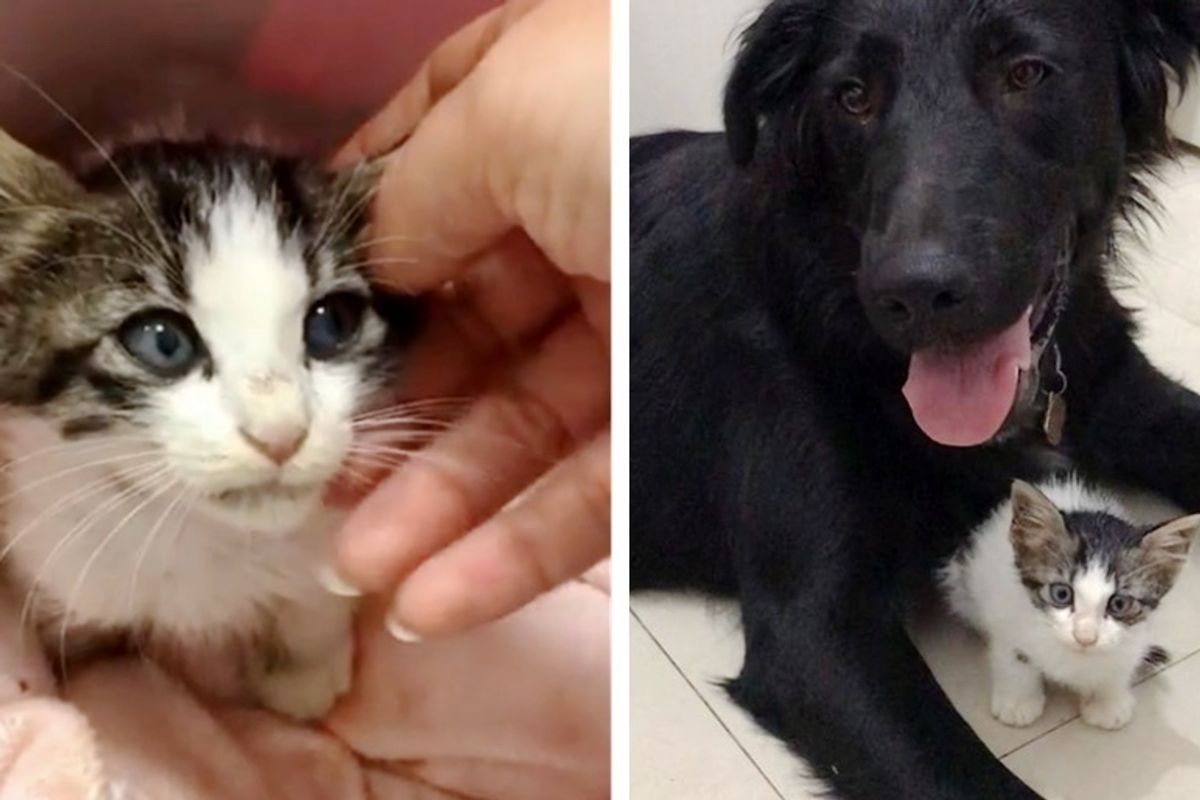 A woman went to walk her dogs but came home with a little stray kitten who needed rescue. 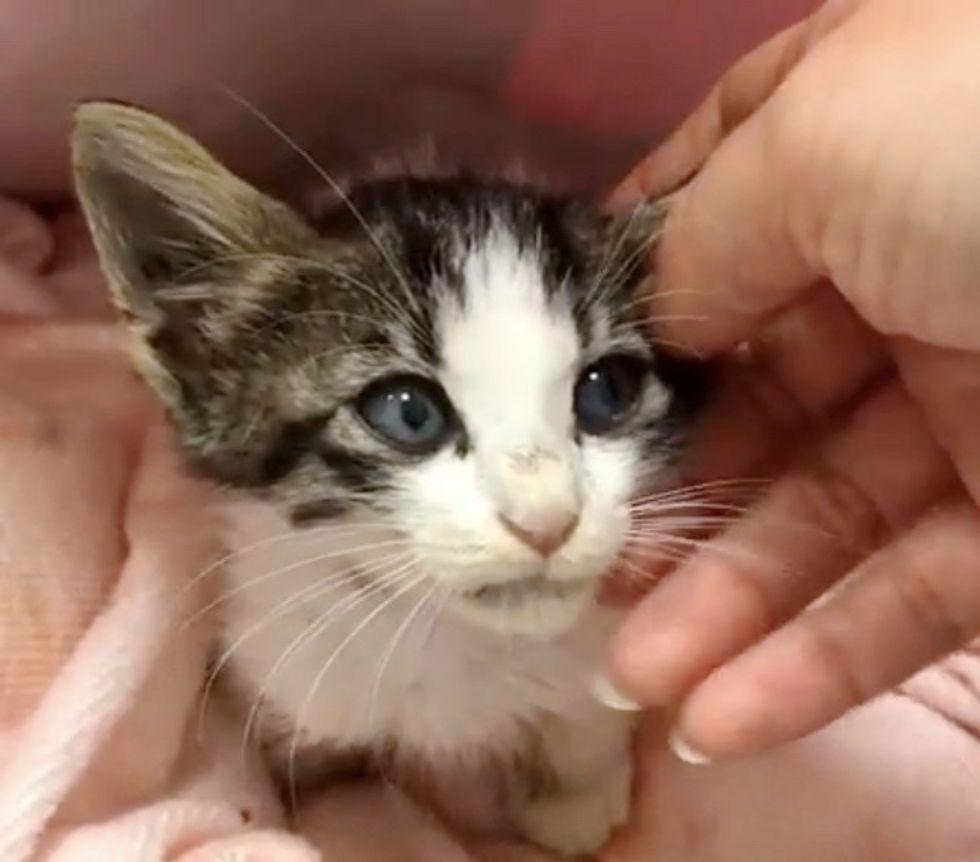 Marisa, a foster volunteer based in Tel Aviv, took her dogs out for a walk one Saturday last month when she saw a kitten in the yard of her apartment complex, crying for help.

The kitten was all alone and just skin and bones. "There is a big stray cat problem in Tel Aviv, so people find stray kittens all the time. Not knowing if his mom was nearby, I went on my walk with the dogs, but only to find him still there when I came back," Marisa told Love Meow.

She couldn't leave the kitten there to fend for himself so hurried home with her dogs and grabbed some food, treats and whatever she could find to help get the kitten. 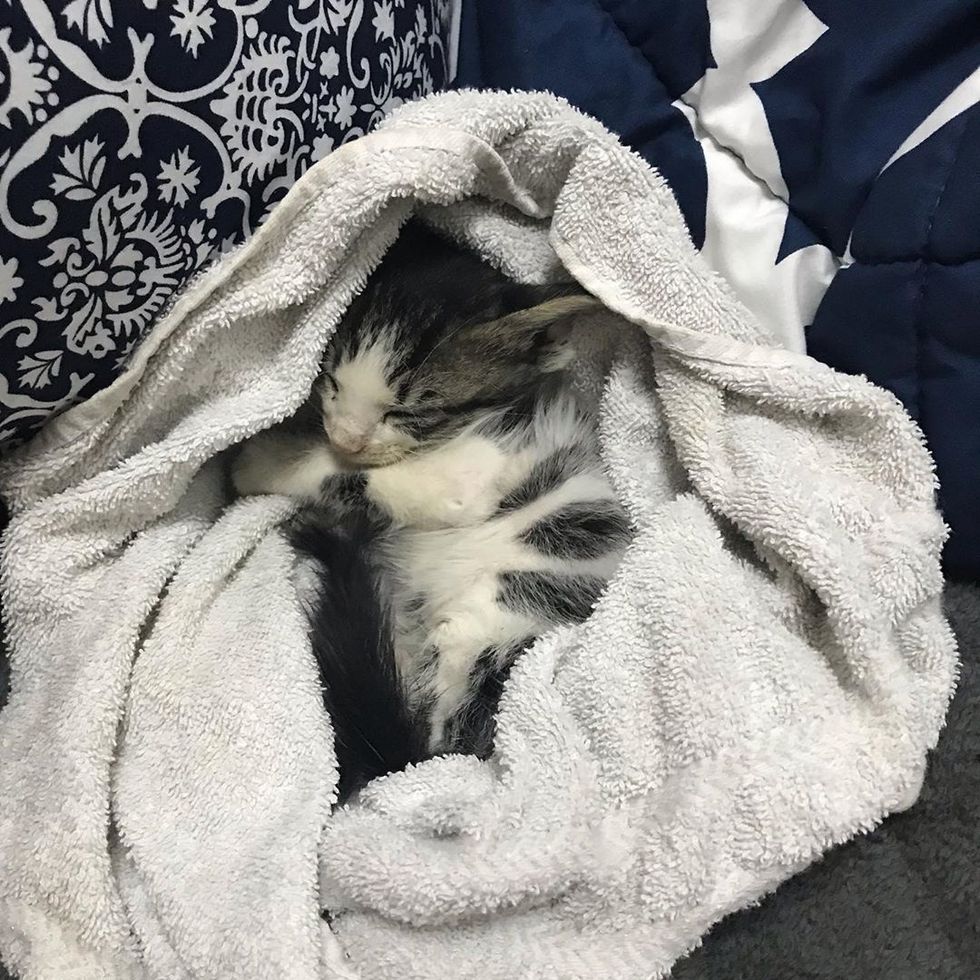 Marisa slowly approached the stray, trying not to startle him, but the kitten was so exhausted that he just let her scoop him up. She rushed him back to her apartment, gave him water to rehydrate him.

That's when she noticed some old and fresh scars on the kitten and a wound on his belly. At just a few weeks old, the kitten had lived a tough life on the streets. 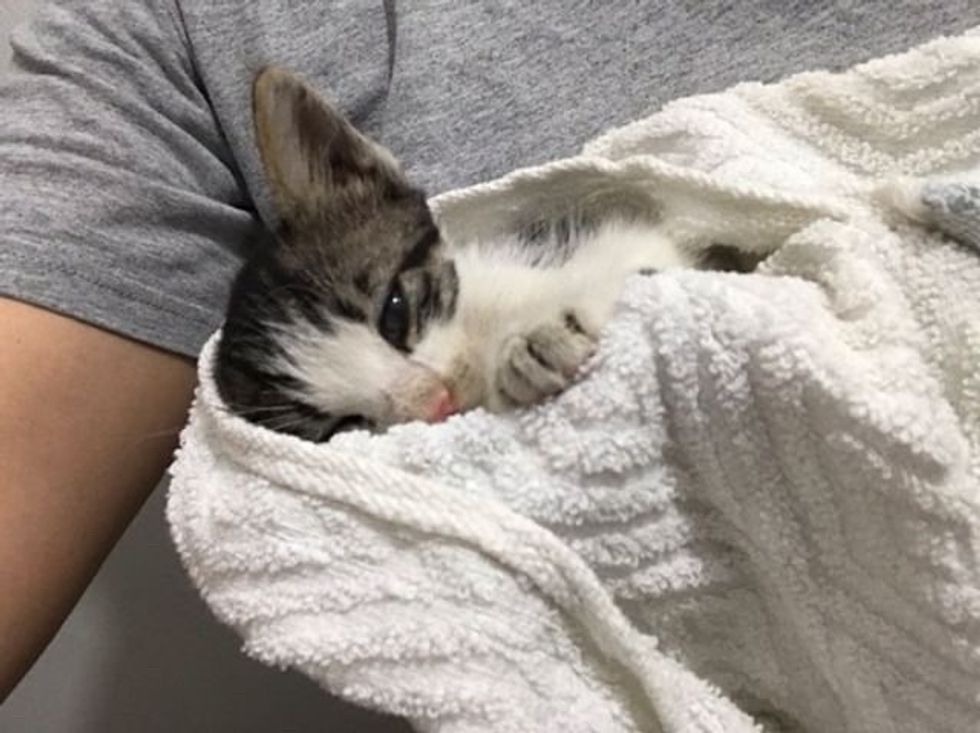 The next few days were touch and go. Marisa and her boyfriend were not sure if the kitten would survive but wanted to give him a fighting chance. They took him to the vet and started him on some medication and eye drops.

Just when the kitten began to perk up, he faced yet another challenge. One night, Marisa spent hours cuddling with him, thinking it would be his last.

"Imagine my surprise when I woke up the next morning to an escaped kitten screaming in front of my refrigerator, waiting to be fed," Marisa told Love Meow. 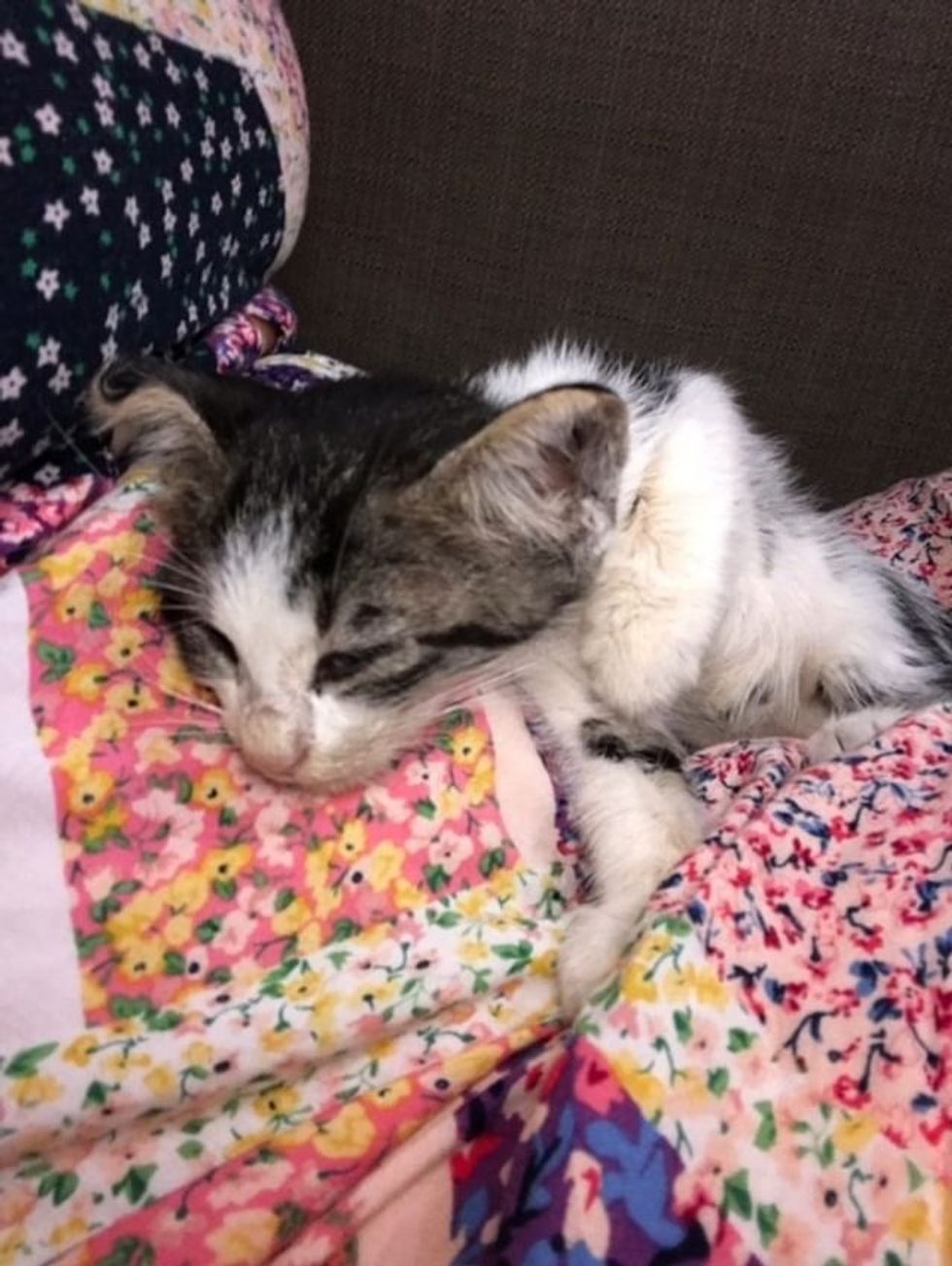 She quickly realized that her dog Comet had opened the door to the kitten room and helped him escape from the nursery box. "The kitten was ravenous that morning and ate more than ever so I started to think he was going to be OK."

Every time Marisa tried to put the kitty back to his room, Comet would plan for his next escape. They decided it was time to let them hang out together under supervision. 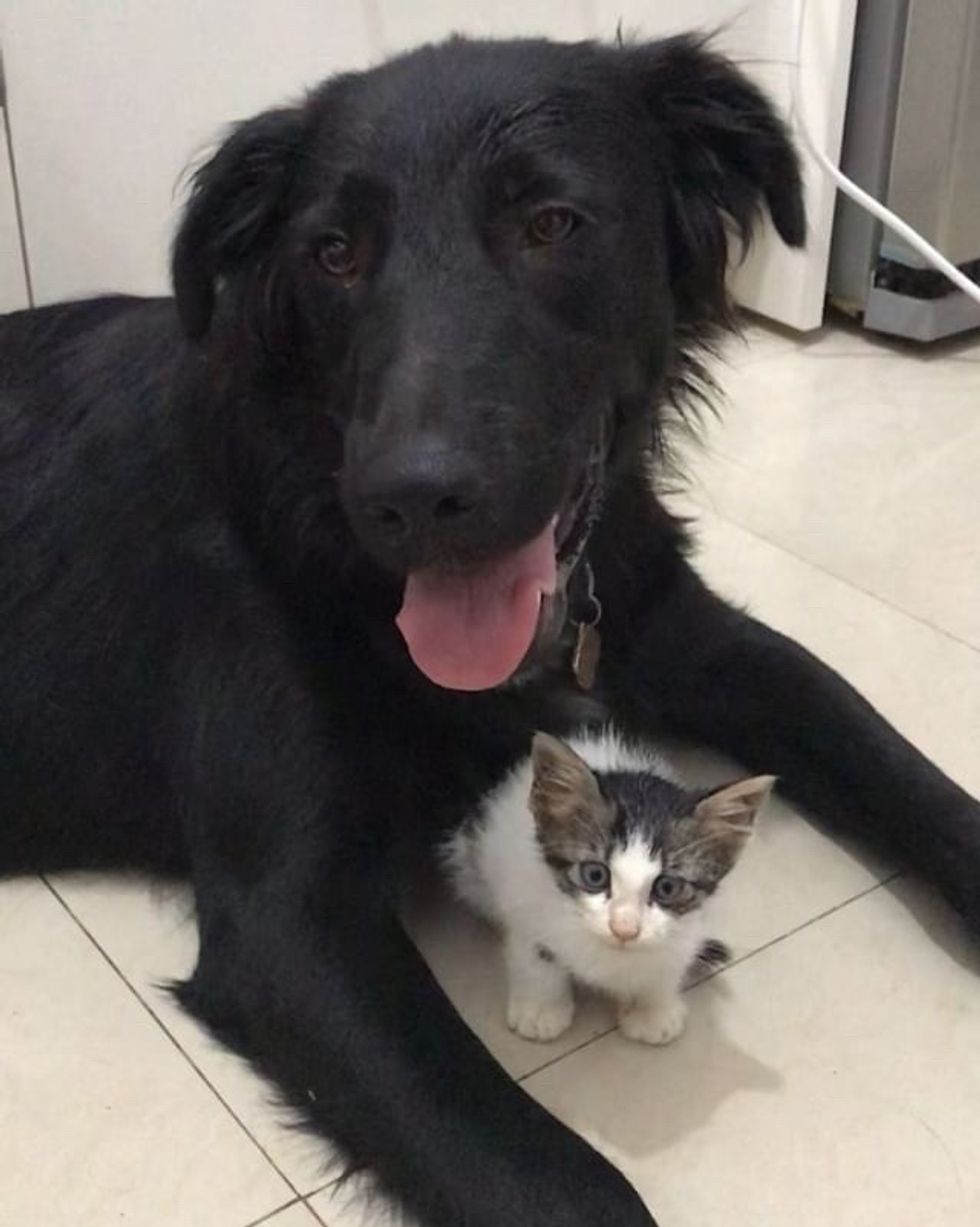 The kitten rubbed his face all over Comet and curled up in his arms to sleep. He purred up a storm as he tried to nurse on his canine friend. "They played and snuggled and he started following Comet everywhere around the house," Marisa said.

When they took the kitten back to the vet, the veterinary team couldn't believe he was the same kitten they saw just a week ago. He was no longer wobbly when he walked and his eyes were clear and bright. 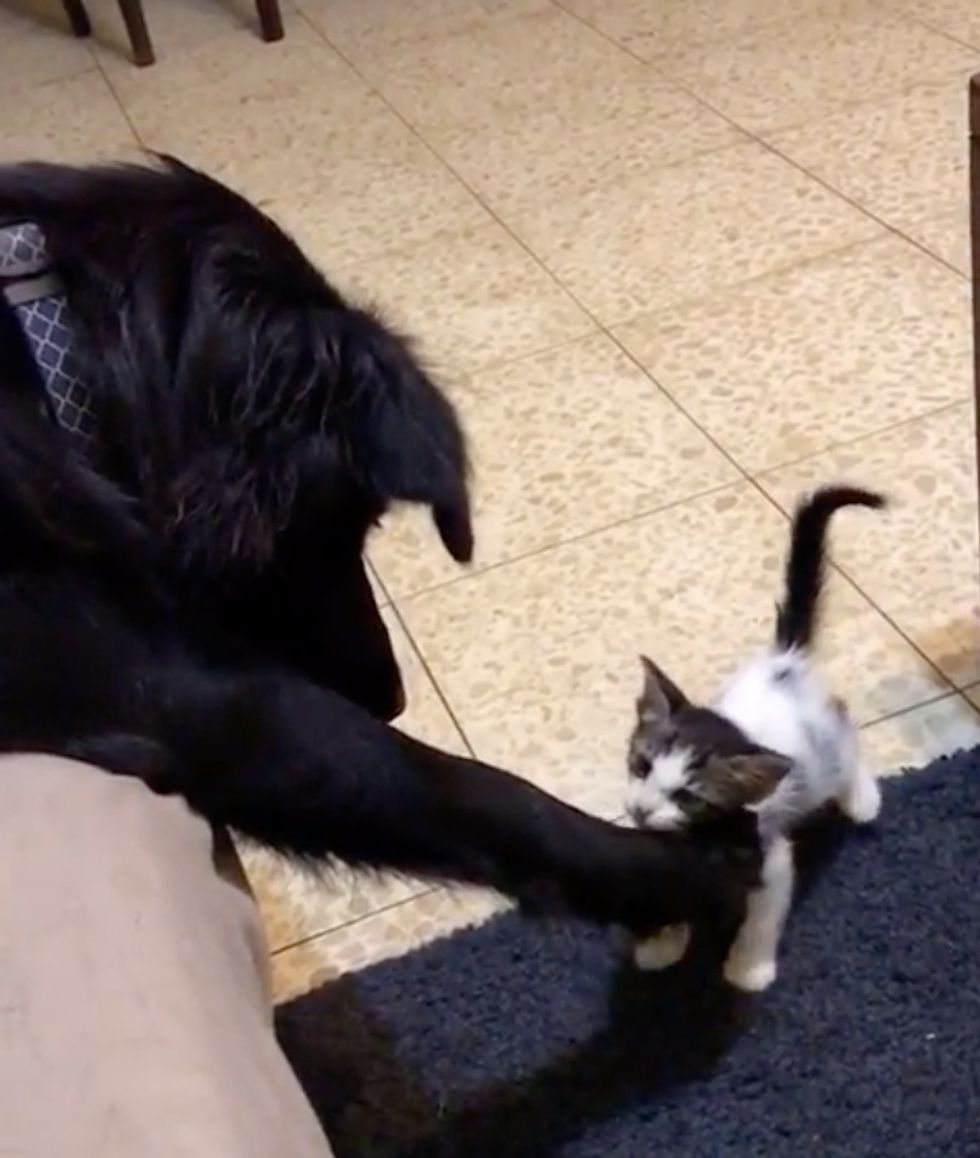 Two days later, Marisa took in a foster dog named Ziggy. As soon as Phoenix met his new canine buddy, he nuzzled right up to her and wouldn't let go.

Watch the kitten and his canine friends in this video:

"He loves to snuggle and comfort nurse on both Comet and Ziggy and he jumps on the couch and chases them like he's part of the squad," Marisa told Love Meow.

The kitten adores his foster family and refuses to be alone. He will meow nonstop until he's with one of his canine buddies, snuggling away. 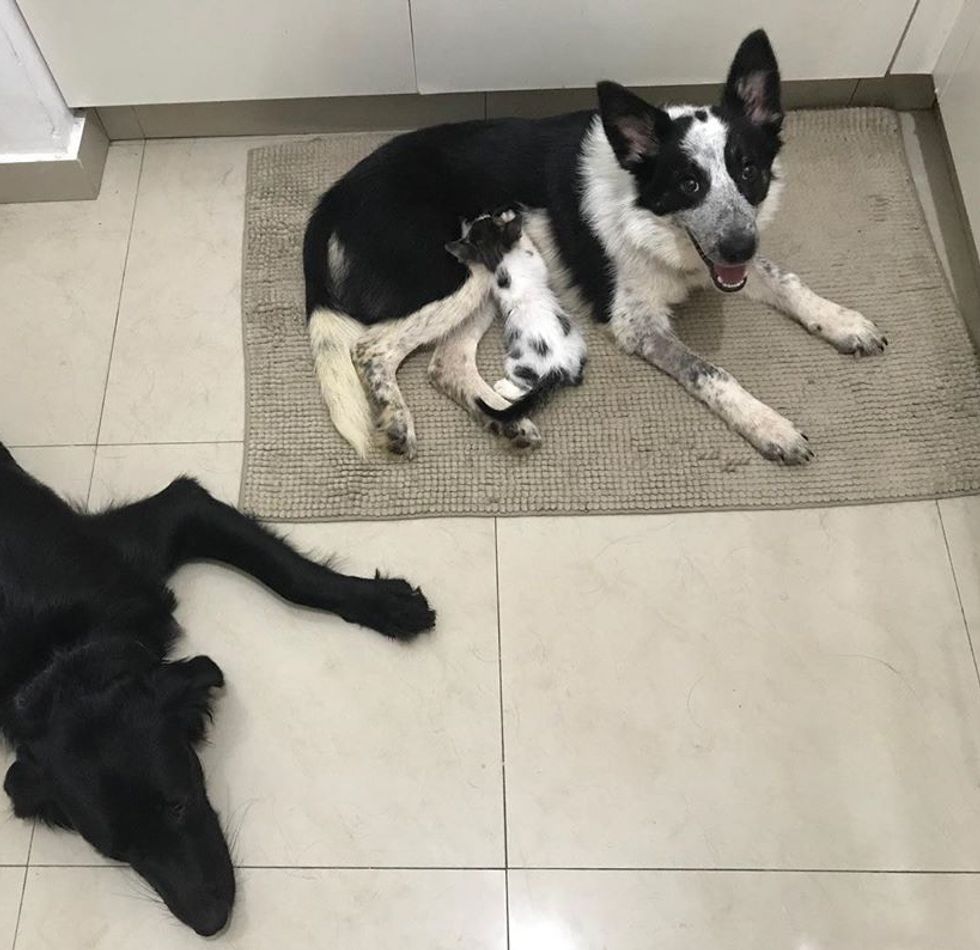 "I started calling the kitten 'Phoenix' because he had bounced back twice when I thought he surely wouldn't make it."

With help from his canine friends, little Phoenix is thriving in foster care and will soon be ready to fly to a place he calls his forever home. 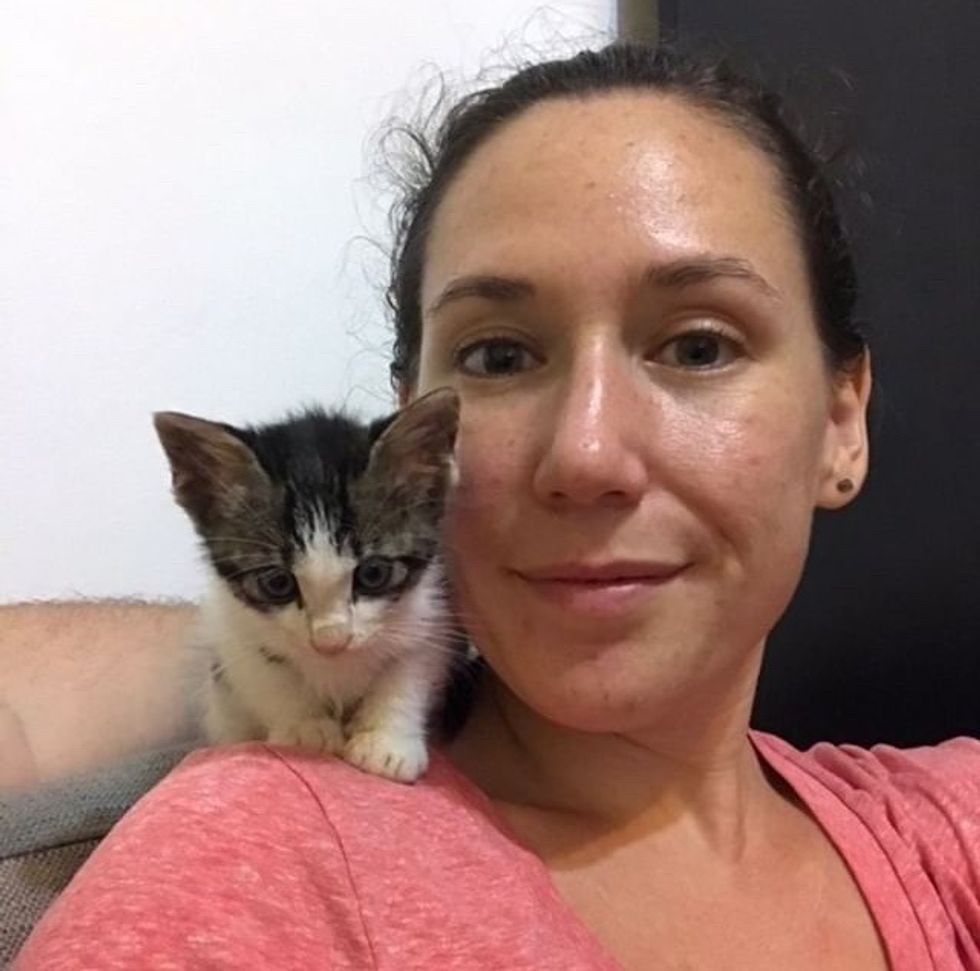 Related story: Couple Tries to Find Kitten a Home But Their Puppy Cuddles Her and Won't Let Go