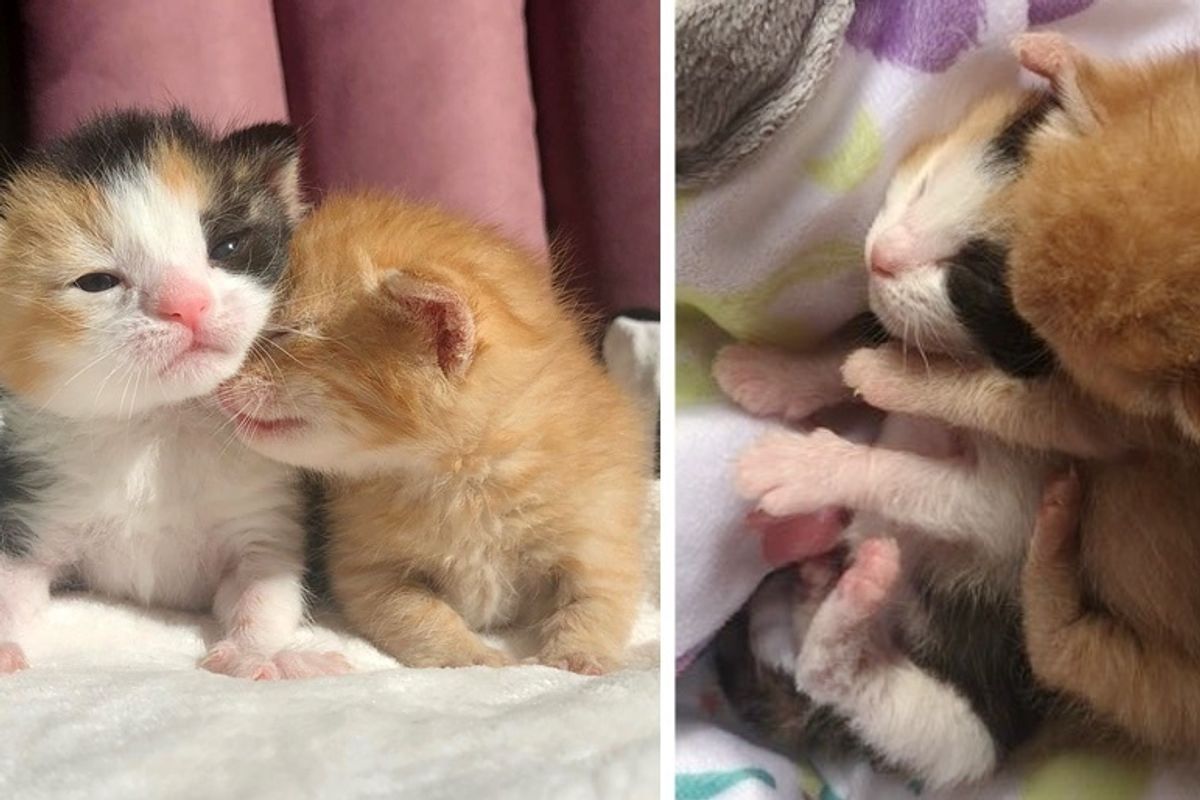 Kittens Keep Each Other Comforted

Two kitten sisters were rejected from their litter. They kept each other comforted until help arrived.

Melinda Blain was contacted about a stray cat and her newborn kittens. A local resident had been caring for the pregnant stray and brought her in so she could have her kittens in a safe place.

"She reached out to me to come and take a look at the kittens and mama since something wasn't quite right - the cat mom had been in labor for the entirety of the day," Melinda told Love Meow.

Two of the kittens were much smaller than the rest, and they had a very difficult time nursing.

The calico, the runt of the litter, was born six hours after her siblings. She continuously got pushed out of the way by the larger kittens and was unable to feed.

The cat mom was exhausted, overwhelmed and stressed with the number of babies and had stopped tending to the weaker ones. The calico squirmed her way to a ginger kitten who had also been pushed away. They immediately huddled up for comfort.

"It became clear to me that the mom wouldn't be able to care for that large of a litter without supplemental feeding for the babies."

Melinda took in the two weakest kittens and named them Nova (calico) and Prima (ginger). Once they smelled the kitten formula, they threw themselves on the bottle. They were so starving that they latched on and started drinking right away.

The two sisters were bonded from the start, always cuddling with each other like two peas in a pod.

Melinda adjusted her schedule to accommodate the kittens' every need. She brings them to work and school so she can continue feeding them around the clock.

"They eat every two hours, so I just become a napper for the first few weeks," Melinda said. "Everything will be much calmer once the babies are older and can go for longer between meals."

"The calico baby loves snuggle time in the sun after food time and her favorite place to be is tucked up next to my face for optimal kisses and snuggles.

"They are so attached to humans from an early age."

A few days later, the kittens looked healthy and happy with full bellies. Even before their eyes opened, they would cry if they were away from one another.

"They have always loved each other and their bond has only grown stronger," Melinda told Love Meow.

The cat mom is doing well with her remaining kittens at their foster home. "I will be helping them out with getting them all fixed, vetted, and adopted out," Melinda added.

When Prima's eyes were open and bright, Nova was still taking her time for her little peepers to come through.

Nova and Prima are 2.5 weeks old today. They are thriving in foster care.

"They are getting to the age where they love to play. I always see them snuggling on top of each other and sleeping," Melinda told Love Meow. "They start meowing if they're separated from each other for too long."

The two sisters cuddled up together from the beginning, and have been inseparable since.

"I'm definitely thinking a double adoption is in their future!"

Related story: Cat Finds Kindred Spirit When He Meets a Kitten In Need of Love