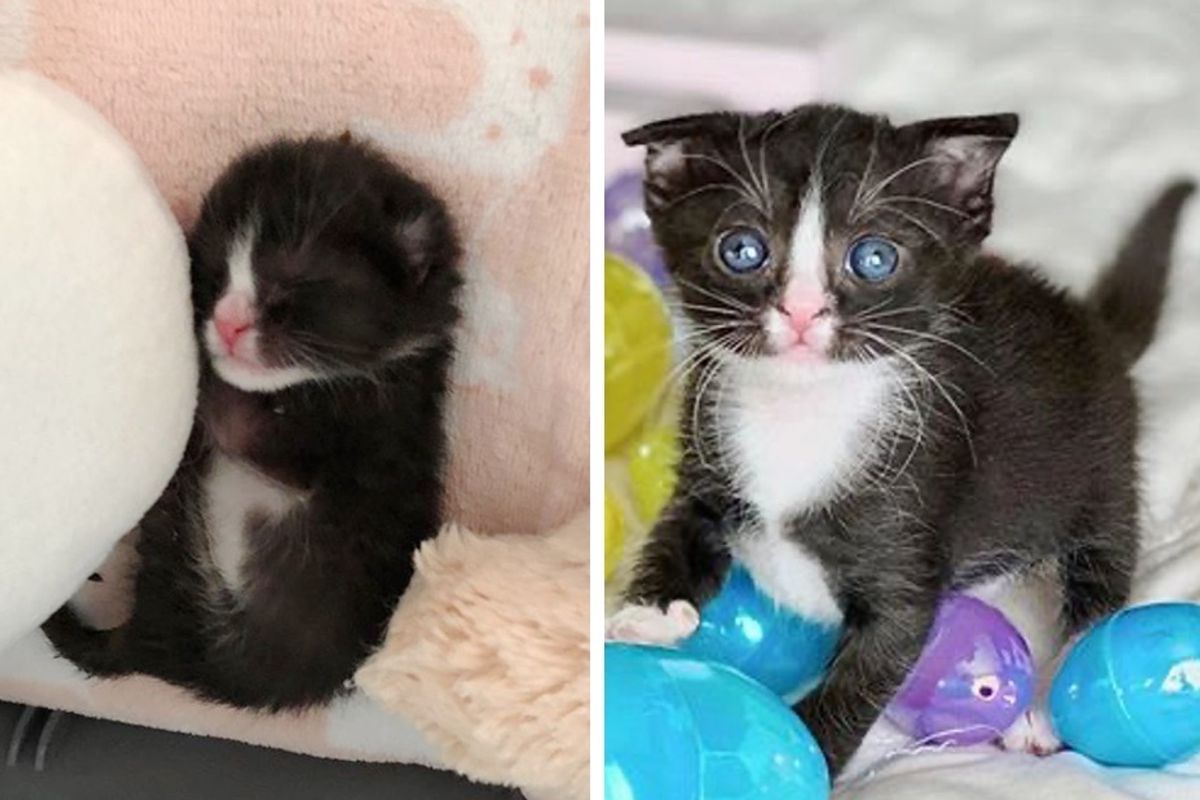 A tiny kitten who was found outside, has blossomed into a beautiful tuxedo.

An animal shelter in Las Vegas received two little kittens who were found without a mom. Patricia Lika, a foster volunteer, took them in. One kitten didn't survive despite their best efforts to save him. The remaining tuxedo was determined to live.

At a few days old, Zoey the tuxedo weighed just 78 grams, but she had a strong heart and an incredible appetite. Overnight, she gained a cute, round belly and made great strides.

"She became stronger and was putting on weight daily," Patricia shared with Love Meow. "Zoey eagerly had her bottles around the clock and we never had a single concern."

When her eyes opened and she started to see, Zoey would dart to her bottle faster than ever, and suckle away to her heart's content. "She loves making baby biscuits and likes to roll over and get belly rubs after every feeding," Patricia told Love Meow.

One of her ears perked up nicely as she continued to grow, but the other one couldn't catch up, giving her a cute little floppy ear. She was tiny for her age, but what she lacked in size, she made up for in personality.

At five weeks old, Zoey was sipping on her bottle like there was no tomorrow — eating was her top priority.

As soon as she figured out how to use her legs, she was hopping around the room like a happy little child. "She is just such a joyous and happy kitten. It's such pure happiness and it's just wonderful to see."

When kittens are first born, their eyes are closed, and ears are folded. As their sense of smell, hearing, and taste slowly start to develop, their ears begin to unfold.

Their ears are usually fully extended at around four weeks. One of Zoey's ears took a bit longer than the other to uncurl.

When she began to wean off her bottle and learn to eat from a dish, her little floppy ear finally began to perk up.

Zoey grew really attached to her foster mom and became her little sidekick, following her everywhere around the house.

Milo the resident dog often comes to lend a helping paw. Zoey likes to climb on top of her canine friend and thinks he is just another cat.

The little tuxedo needed a friend to play with, so when Patricia received another singleton (Teddy), she began planning their introduction.

It was love at first sight. Both kittens were rescued from an uncertain fate, and now they have each other.

They enjoy running free in their human's bedroom, chasing each other and creating all sorts of antics.

"I cannot believe how fast time flew by. Zoey has an amazing home waiting for her along with Teddy," Patricia said.

The two best friends will be adopted together!