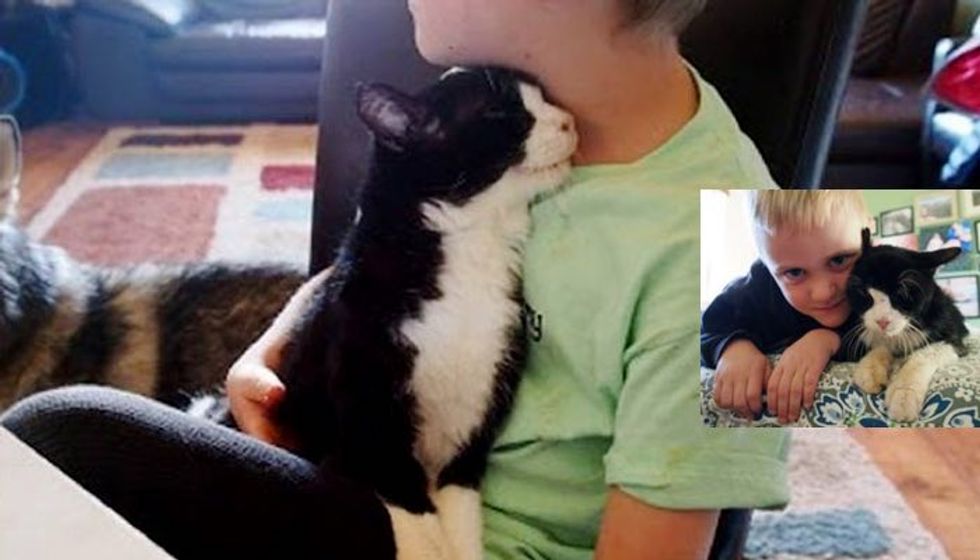 20 Year Old Cat, Dexter, Finds New Home And Has So Much Love To Give

20 year old Dexter is a super-senior cat who has so much love to give. When a family was looking to adopt a young, healthy cat, Dexter, found his way into their hearts.

Dexter cuddling with his best friend in his forever home.

"He was 20 years old, underweight and a bit rough around the edges from a combination of age and poor nutrition. He also has a pretty significant heart murmur," Christelle L. Del Prete wrote via Best Friends Animal Society. Follow them on Facebook.

Jill Williams who has two boys and three dogs, noticed Dexter right away. "What about him?" she asked.

Though she wasn't sure if Dexter would take to her two lively little boys, "she knew the young cats would get adopted quickly, and that Dexter was just as deserving and capable of giving love. But no one expected just how much love he had," Christelle added.

The moment Dexter stepped into his new home, he started cuddling with the boys. It was an instant bond. "Dexter now spends his days hanging out with his new best friends, especially JJ, who helps feed him."

There is nothing that makes Dexter happier than being held and snuggled. "Dexter is hyper-affectionate and can't seem to get close enough to his people. He'll burrow into the crooks of their arms, or rub his head and whole body up against them for hours."

Dexter's finally getting the family he always wanted. He is proving that older cats make wonderful companions and they have so much love to give.

He can't get enough of snuggles with his little humans.

He also loves his doggie friends and gives them a lot of snuggles too.

He is a super-senior cat and has so much love to give.