Kitten Who Lost Use of Back Legs, Now Moves Faster Than Other Cats and Helps Kitties in Need

A man from New Jersey was at a job site near a port when he saw a tiny kitten fall from a machine. He rushed over, scooped him up and saved his life. 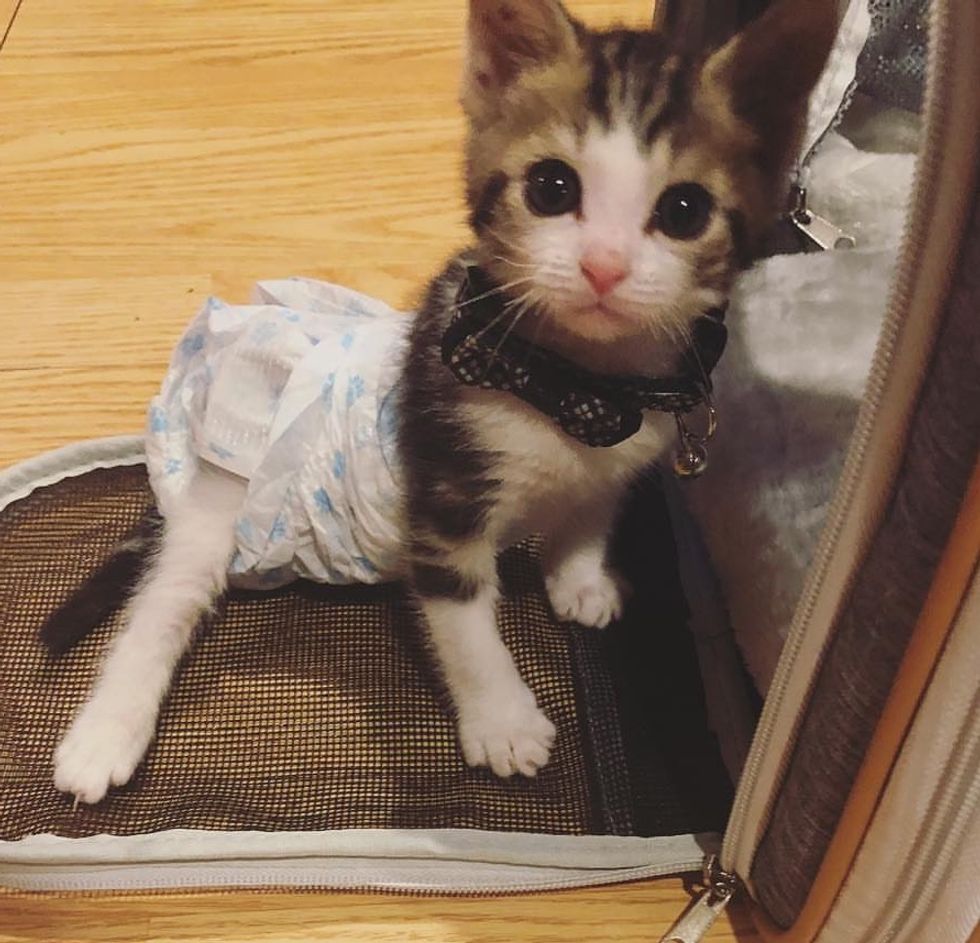 A feral cat mom with a tiny singleton had been seen wandering around the area. The kitten was only a few days old but he was not in the best shape. They decided to watch the kitties and keep the mom fed so the baby could continue nursing.

When the guy saw the cat mom drop her kitten from the machine, he knew it was time to intervene. "The kitten was barely breathing, disgustingly dirty, and still had his umbilical cord attached," Dawn Firestone, the man's wife, told Love Meow.

Dawn was worried that the little one wouldn't make it. "His mouth was open, he was freezing and would gasp for air every 10 seconds or so."

She turned up the heat in her car and rubbed him to get him to come back. "I promised him right then and there that if he made it I would give him the best life ever!" 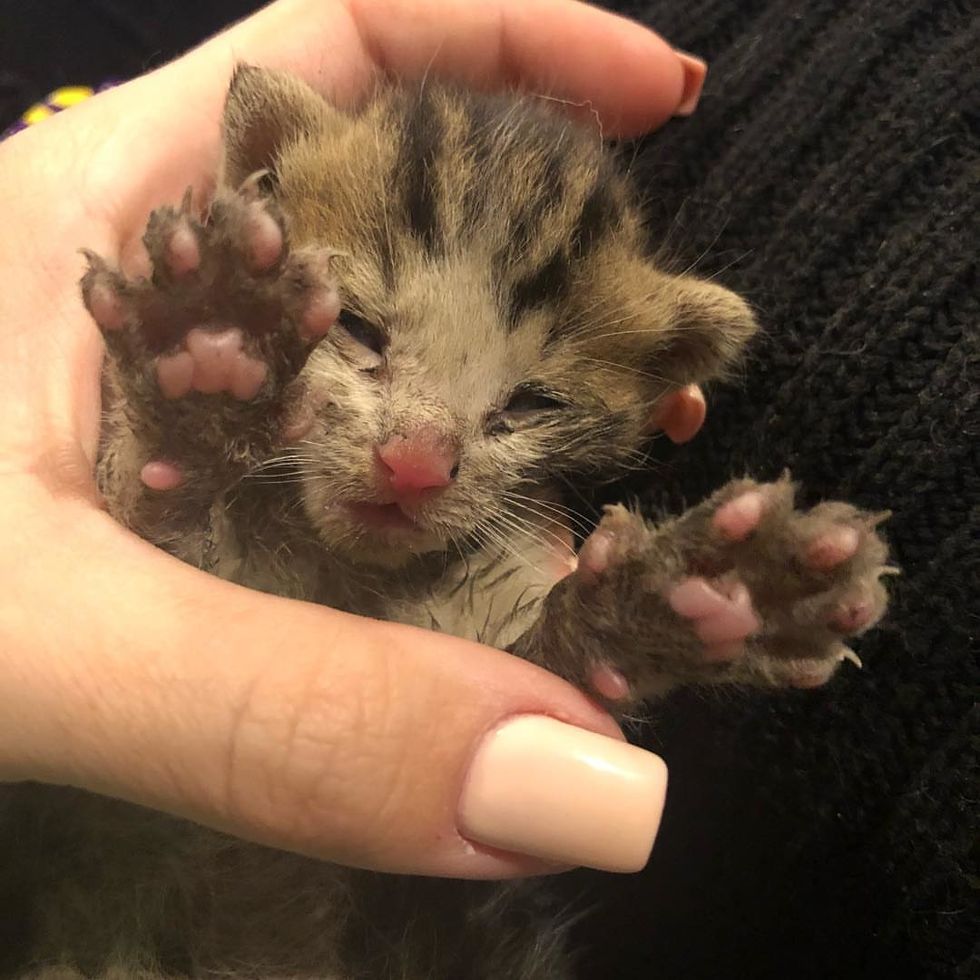 That's when the kitten let out a long meow as if to tell his rescuer that he wasn't ready to give up. For the first day, Dawn had to feed him with a dropper to dribble food into his mouth as he was too weak to eat.

"It was a very rough few days but every day he got better and better! He was such a fighter so I named him Rocky," she told Love Meow. 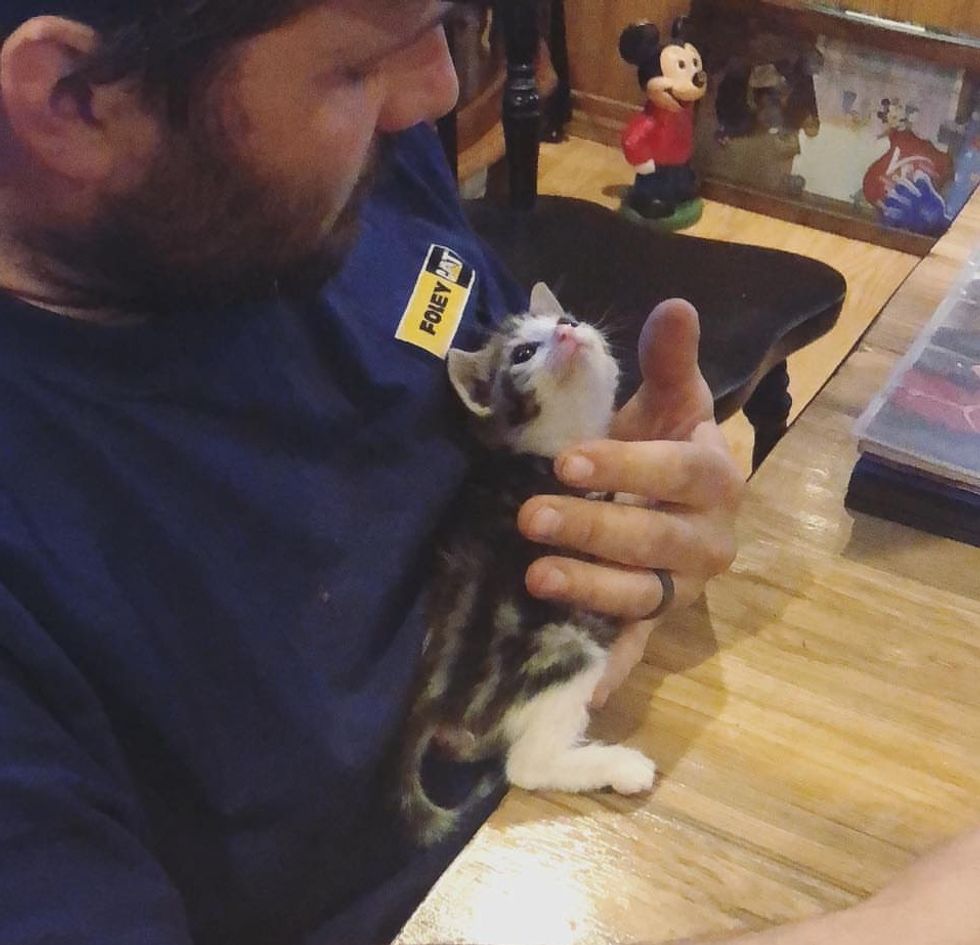 Three days later, Rocky was strong enough to start crawling. He finally got a much-needed bath and even began to purr. He had amazing fighting spirit from the start.

As he continued to heal, Dawn noticed something different about the way he walked. 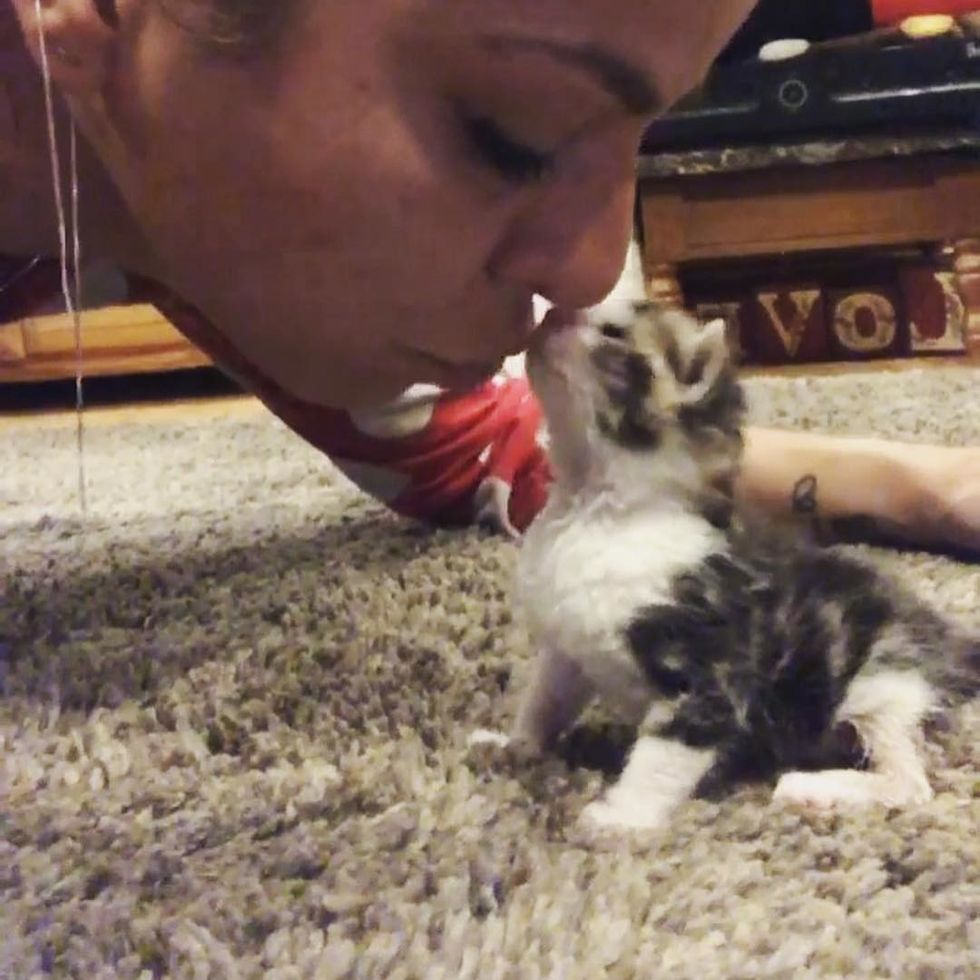 "When he started to show signs of things, I thought he was scooting because he was so tiny and maybe he was leaving a pee trail like a snail because he was a slow learner."

After surviving the fall and bouncing back from the brink, Rocky faced yet another huge challenge. 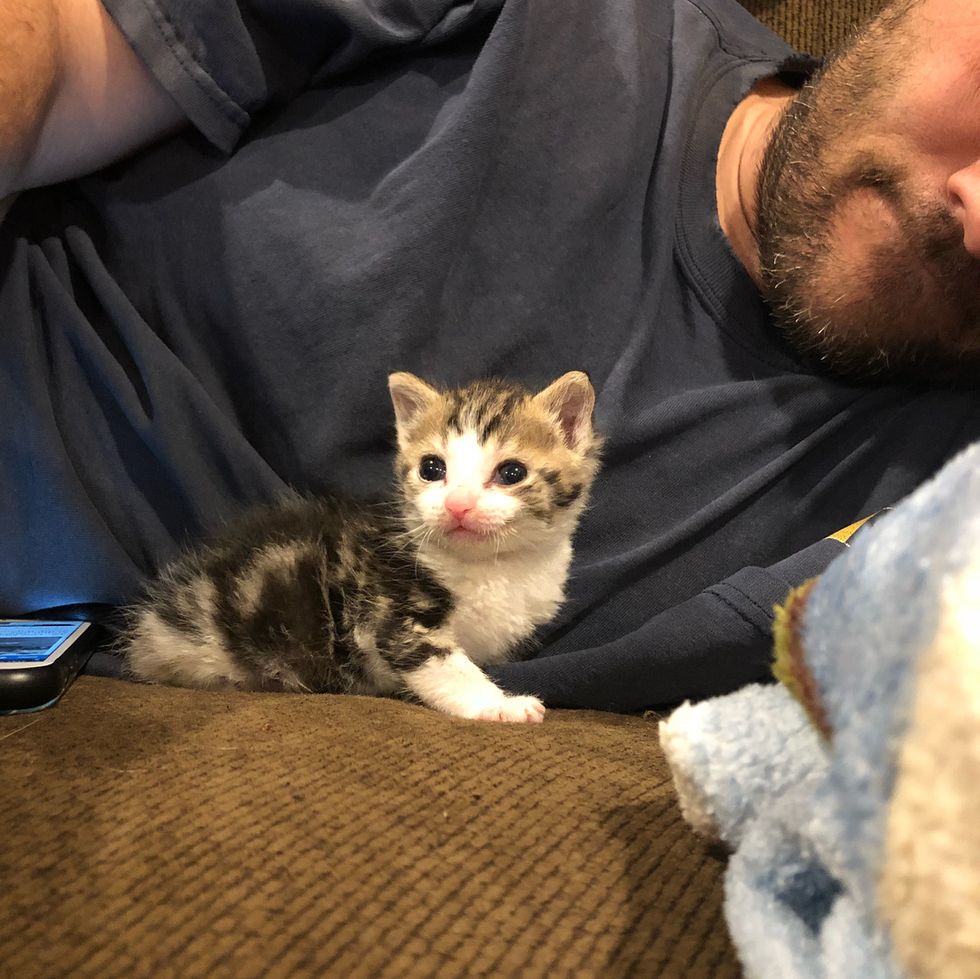 "I brought him to a neurologist and she said he has no feeling in his lower half of his body and will never walk because of the nerve damage from the fall," she said.

But Dawn didn't want this diagnosis to define him. When they squeezed his legs, Rocky reacted by giving a little kick. The determined little kitty soon proved to everyone that he could run faster than anyone would have expected. 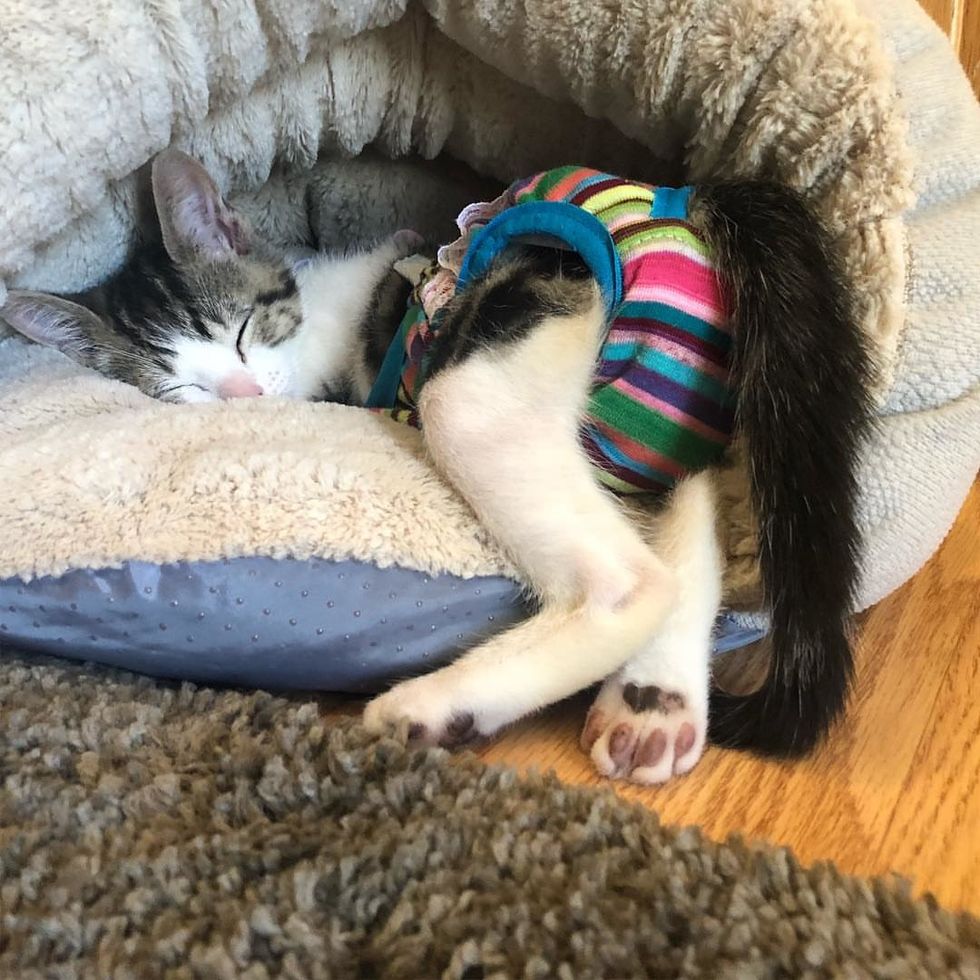 "I started doing research and had to learn in super speed how to care for him and what was going on. It was a lot of trial and error and a lot of learning."

They got him a new set of wheels and Rocky immediately went flying across the room. His back legs were pedaling, propelling the body to move forward. 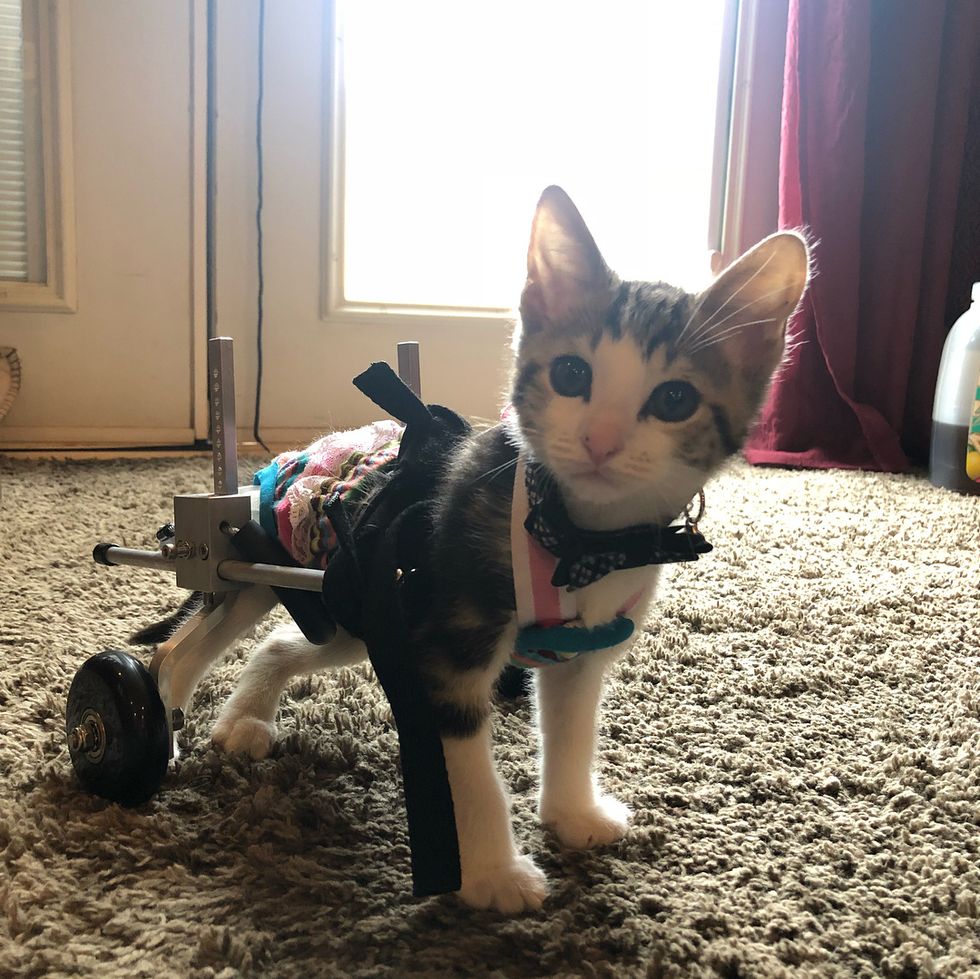 Each day, his legs got a bit stronger and he went a bit faster. When he was done with his daily exercise, he would crash in his kitty bed for a cat nap.

As soon as he wakes up, he goes scampering around, chasing a ball or catching invisible bugs. Rocky doesn't let anything slow him down. 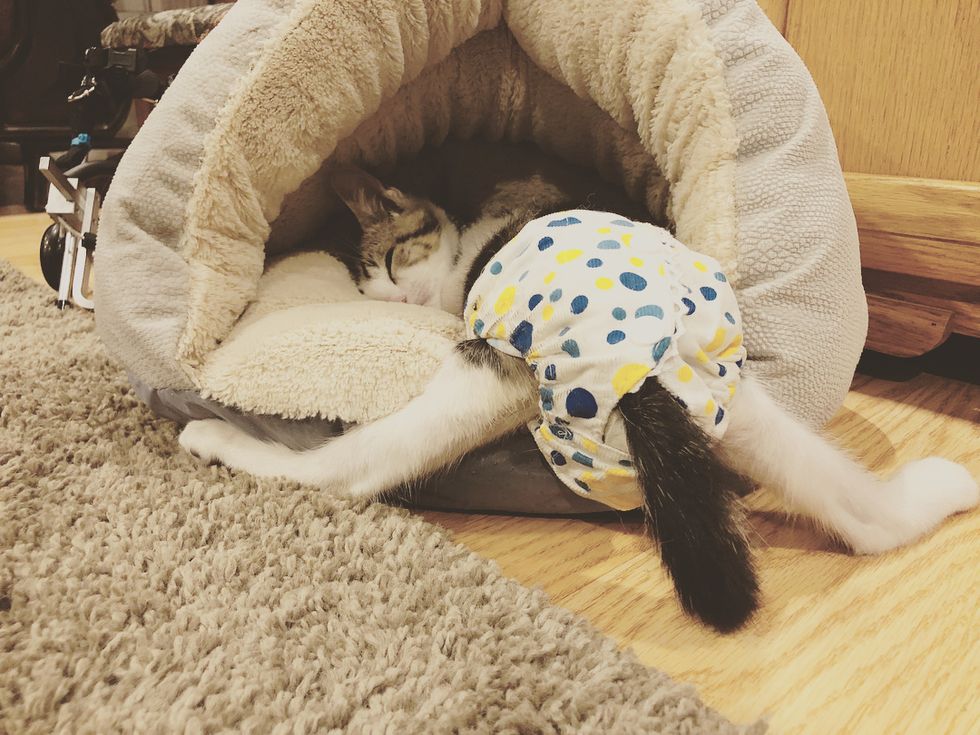 "He is just the sweetest baby ever. He needs to snuggle to nap and adores everyone!"

Rocky loves people and is very nurturing to other kittens in need. 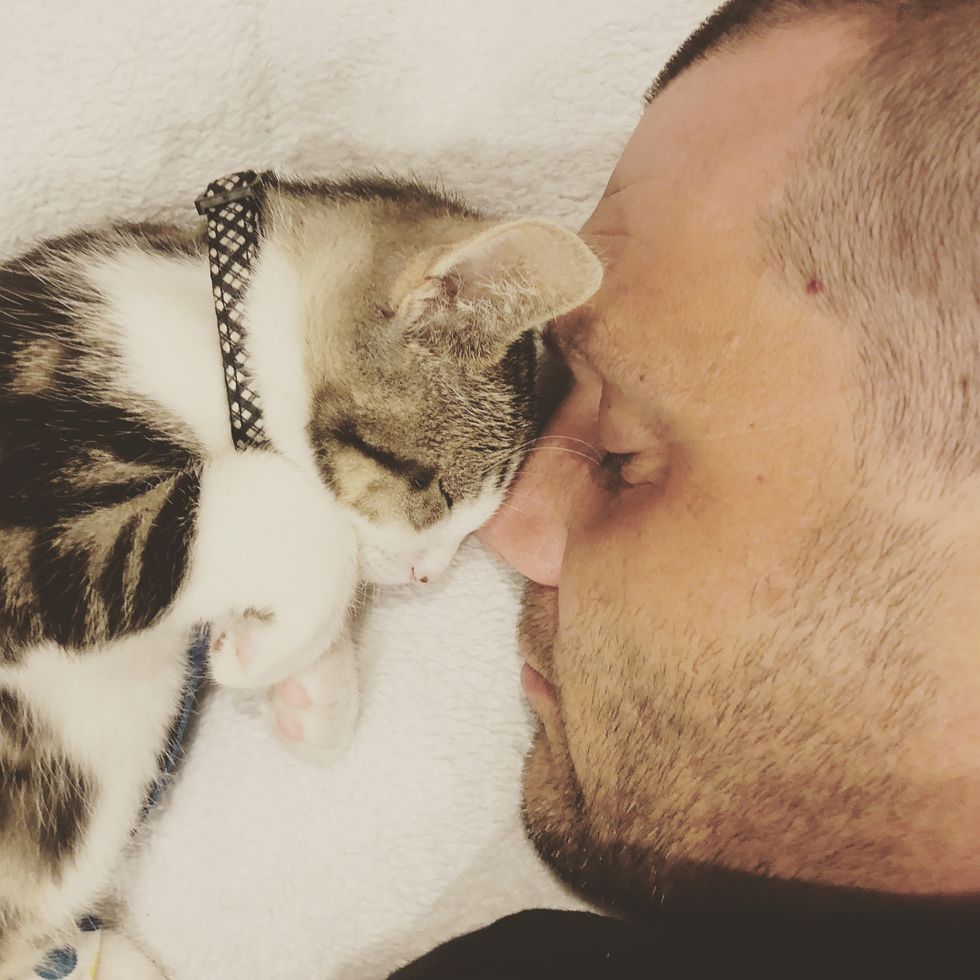 Dawn and her husband do what they can to help cats and kittens from their local cat colony. They often bring home kittens to foster.

"Within two days Rocky is cleaning and snuggling with them," Dawn said. "The kittens always adore him and love jumping all over him." 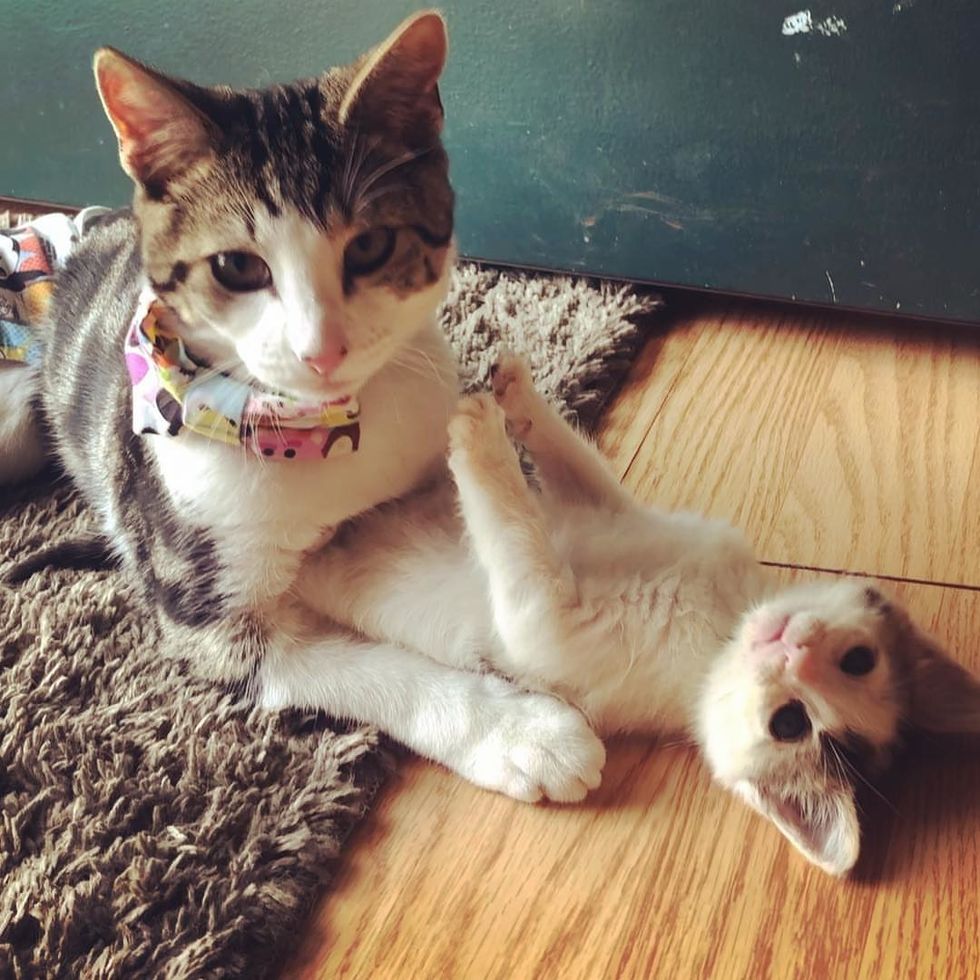 "Rocky watches them as if he's making sure they are OK! Most of the time, he just wants to clean and snuggle with them."

Rocky showing his foster kitty his very own "gym". 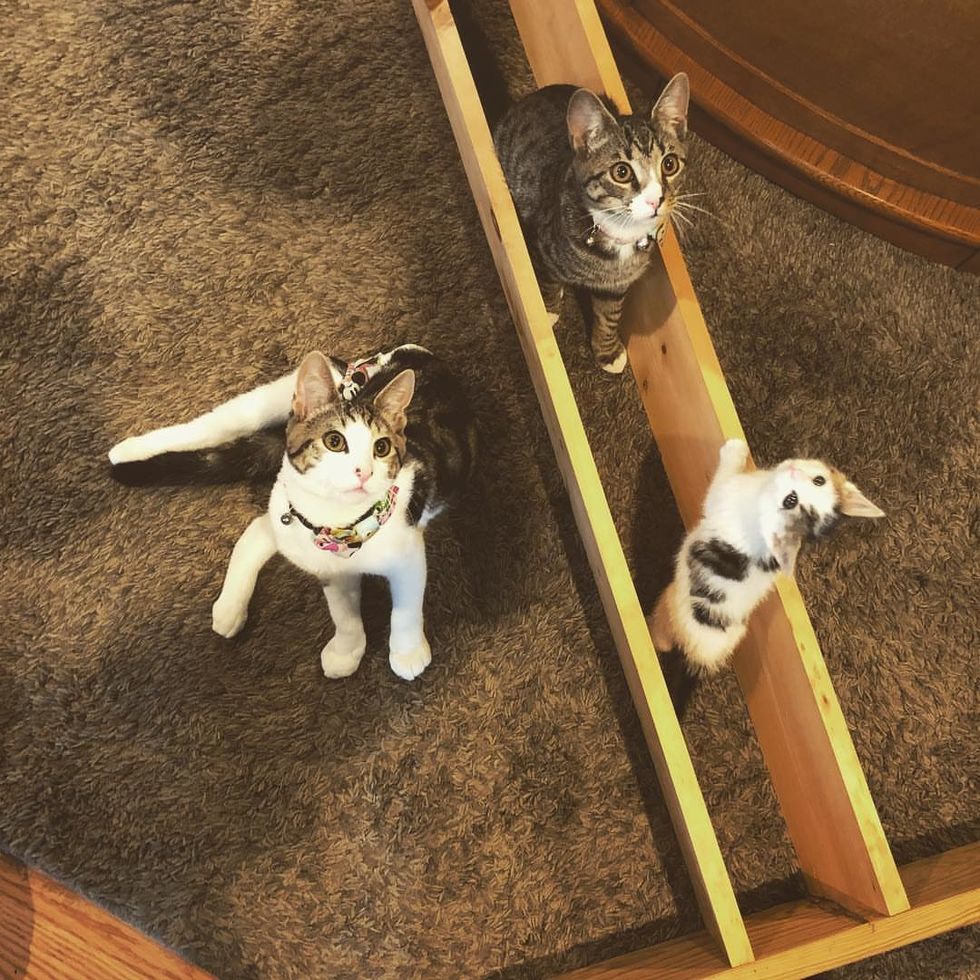 "He has become so loving and sweet to the fosters. I think he definitely gives them the bonding they need," Dawn added. 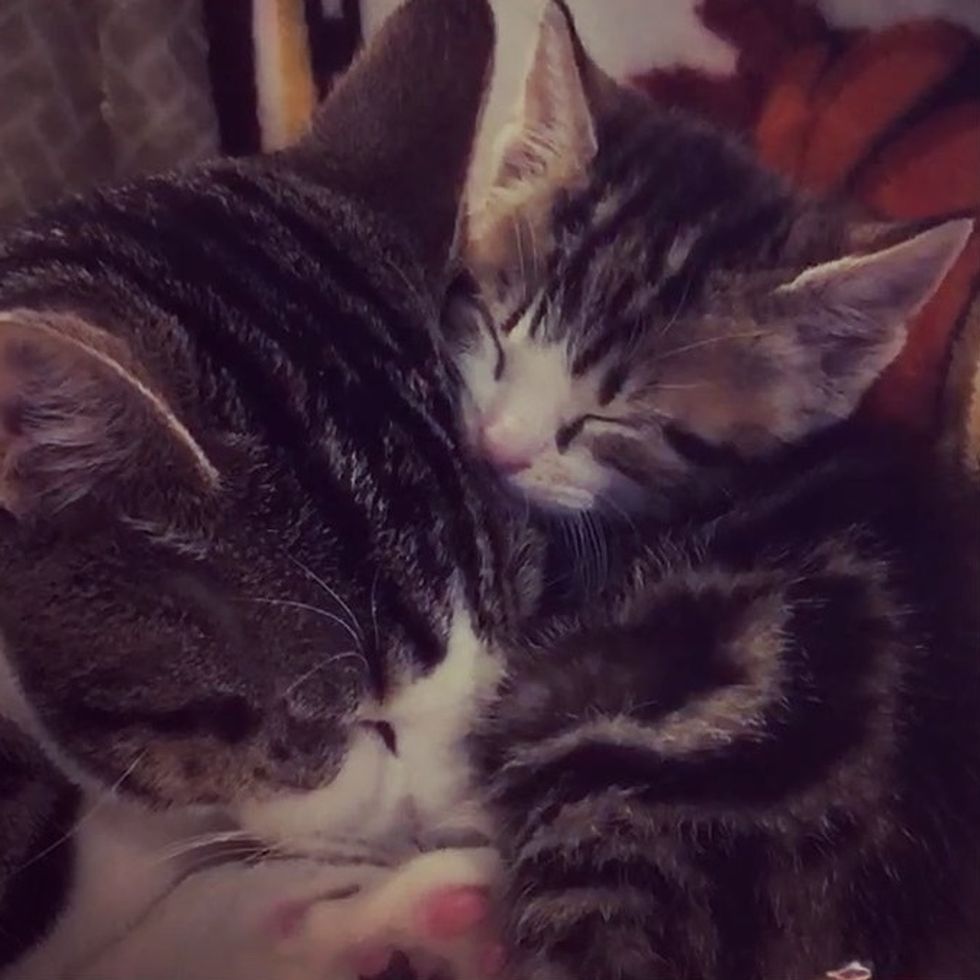 "Kittens and cats like rocky are worth adopting. My mission is to shed light on how amazing they are," Dawn added.

"He inspires everyone that meets him!" 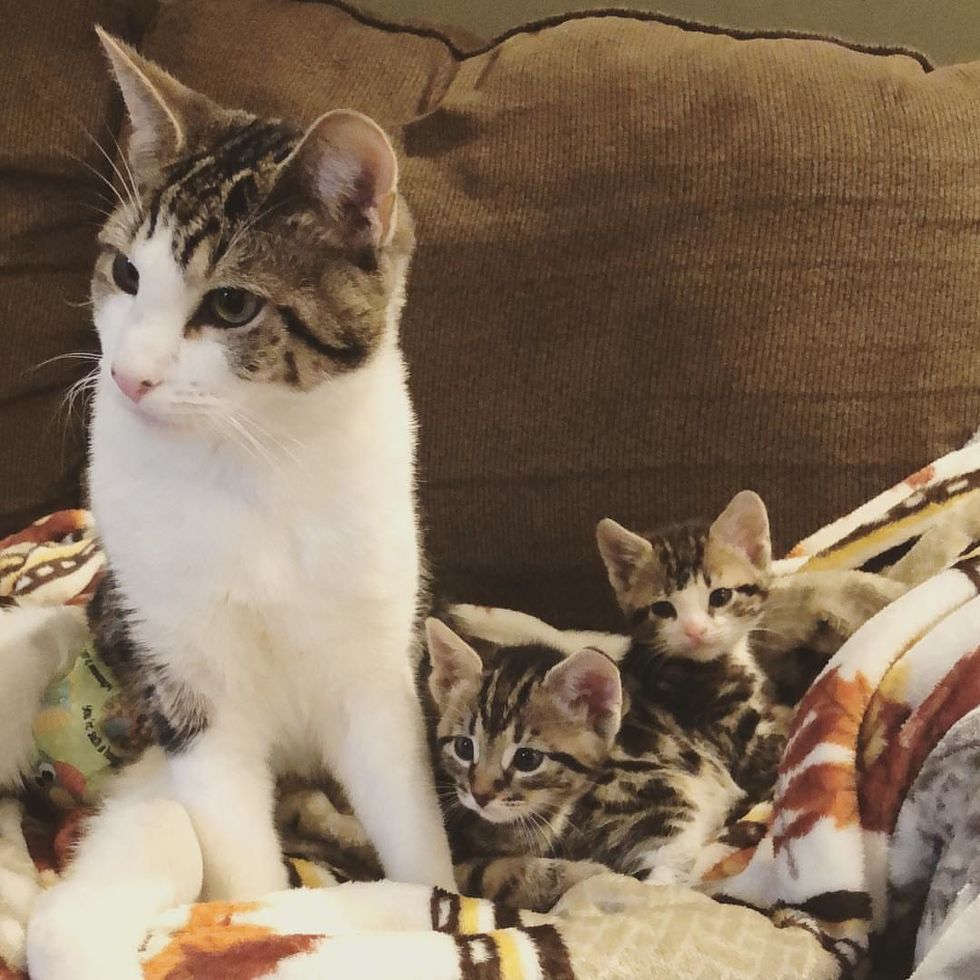 Rocky is giving his foster kittens the same love he received when he was rescued. 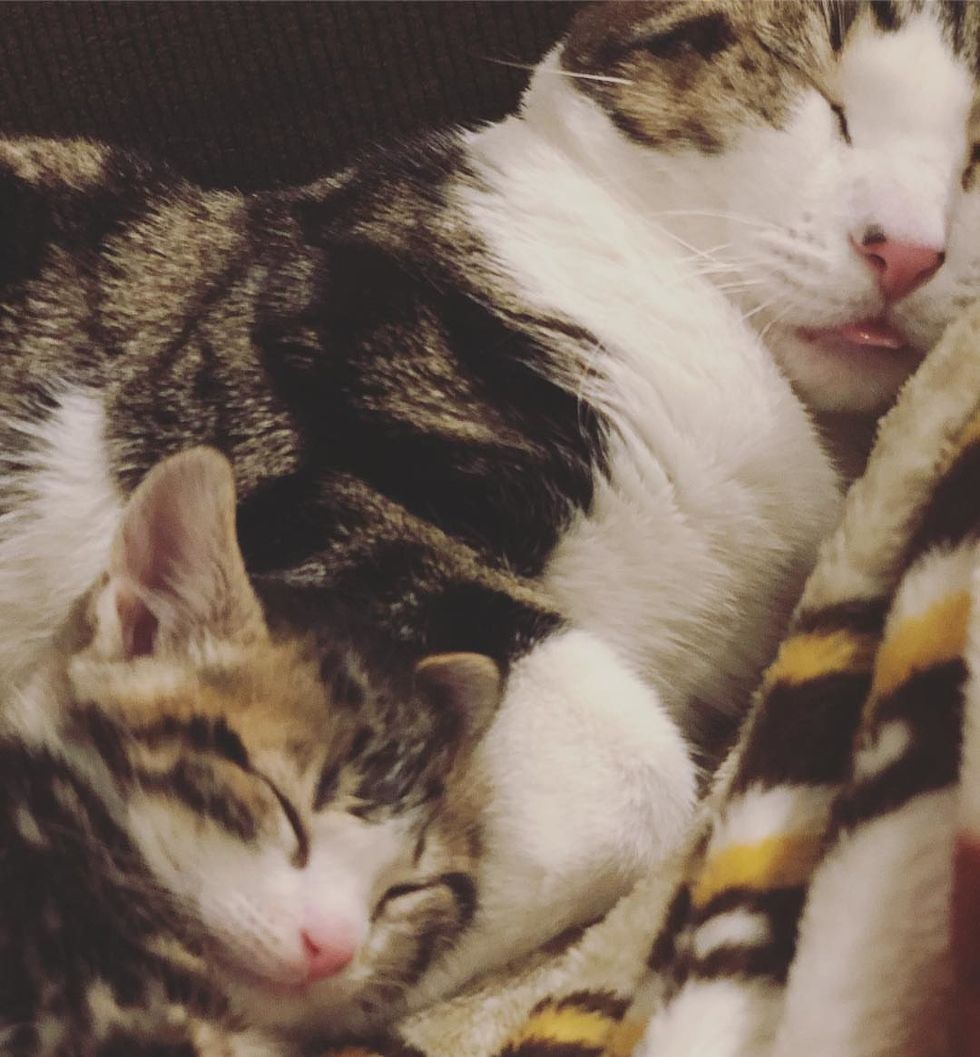 "I would choose him again and again. He has completed me and came into my life when I needed it the most," Dawn told Love Meow.

"He's unbreakable, unstoppable and could run around all day. He's a fighter just like Rocky." 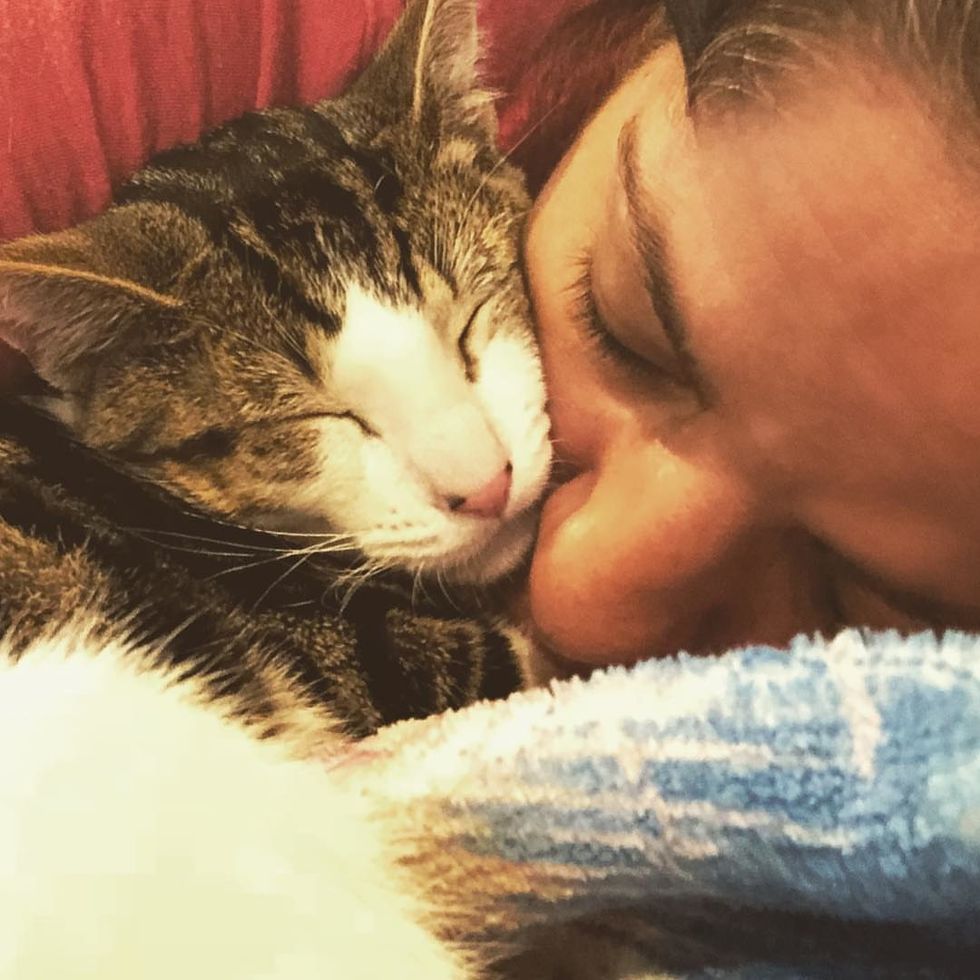