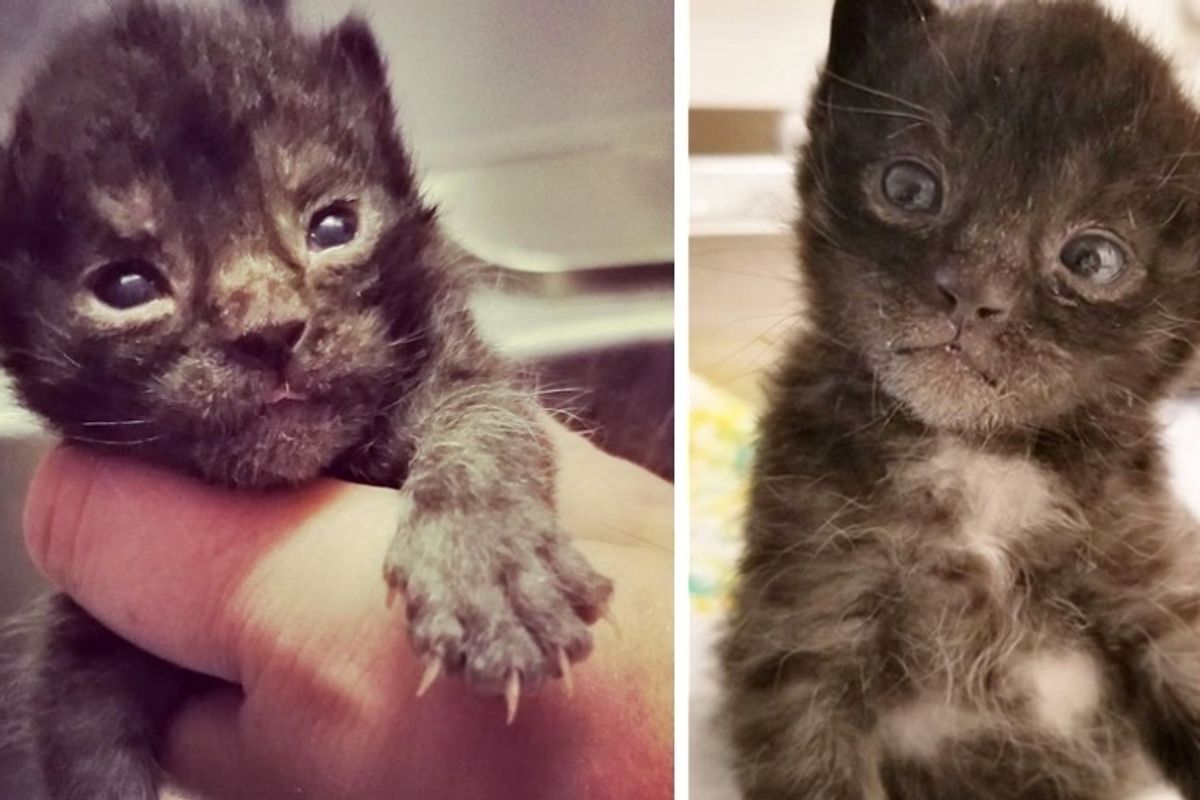 A veterinary technician took a chance on a tiny kitten that no one expected to survive.

The kitty never gave up.

Ellen Carozza, a Feline Licensed Veterinary Technician at NOVA Cat Clinic, received a litter of three kittens needing critical care. "They were a day or two old when I got them, and the shelter said, 'something is wrong with one of them,'" Ellen told Love Meow.

Amos, the little black kitten, had non-stop seizures. After a vet exam, lab work and x-ray, nothing really stood out that would indicate an issue. "All the lab work said 'no' to toxoplasmosis and to potential other reasons why, and the radiologist really couldn't tell us if there was head trauma, so back to square one."

The kitten was a very challenging case but Ellen was determined to save him. "I set out to prove everyone that we can help these guys. It takes a lot of time, effort, team work, and patient advocacy to make these critical cases successful," Ellen said.

From that day on, Amos became her 24/7 critical baby. She checked on him every hour, fed him at appropriate times and made sure he was as comfortable as possible.

"Amos was tube fed for the first few days, then he would take to a specialized bottle meant for wildlife, but you had to be careful feeding him as he would still have his focal seizures as he would exhibit odd fits of aggression with growling and hissing," Ellen added. "The last thing we wanted was him getting aspirate pneumonia from him inhaling kitten formula."

A few days later, Ellen saw no improvement. She had moments of self-doubt and all sorts of worries running through her head. But when she sat down to feed Amos, the little guy was eager to eat. She saw his amazing resolve despite all the odds against him. The palm-sized kitten had the fighting spirit of a warrior.

"We would not give up on Amos until he told us he was ready to give up. Even my veterinary team were surprised each day that he returned into work with me and were always glad to see him still chugging along... seizures and all."

When Ellen had to leave town for the weekend, she brought Amos with her so she could continue the round-the-clock care for him. (Scroll down for video)

"We packed the three kittens up along with Francis (resident cat). I couldn't give up on him. He never gave up and he was always present."

Amos opened his eyes at a little before two weeks old. "I felt even more determined as now I felt he really had a presence," Ellen told Love Meow.

"He was developing and trying regardless of his problem. He recognized my voice and would respond in a positive manner to my touch. He learned to purr and continued to have a great appetite."

Around two weeks old, Amos started to learn to walk. He was driven to do anything just like his siblings and would make an effort to explore and exercise those tiny legs.

"We were amazed that no matter what, he kept going and we indulged him."

By week four, Amos was becoming more like a normal kitty with barely any uncontrollable twitching in his face. Then a week later, he was finally seizure free.

Watch his journey in this video:

"Now he is five weeks old, a bit cross-eyed, a bit nearsighted, and a bit sound sensitive, but he is a cat. He can walk, run, play, is learning to eat from a bowl and is using the litter box," Ellen said.

"Amos will seek out people to be picked up and snuggled with. He is seizure free and has a delightfully quirky personality."

No one expected this kitty to make it far, but he did and is now thriving.