A fluffy cat has found herself a feline admirer. Ever since her neighbor's cat saw her one day, he has been her biggest fan, following her everywhere she goes and even comes over to see her. 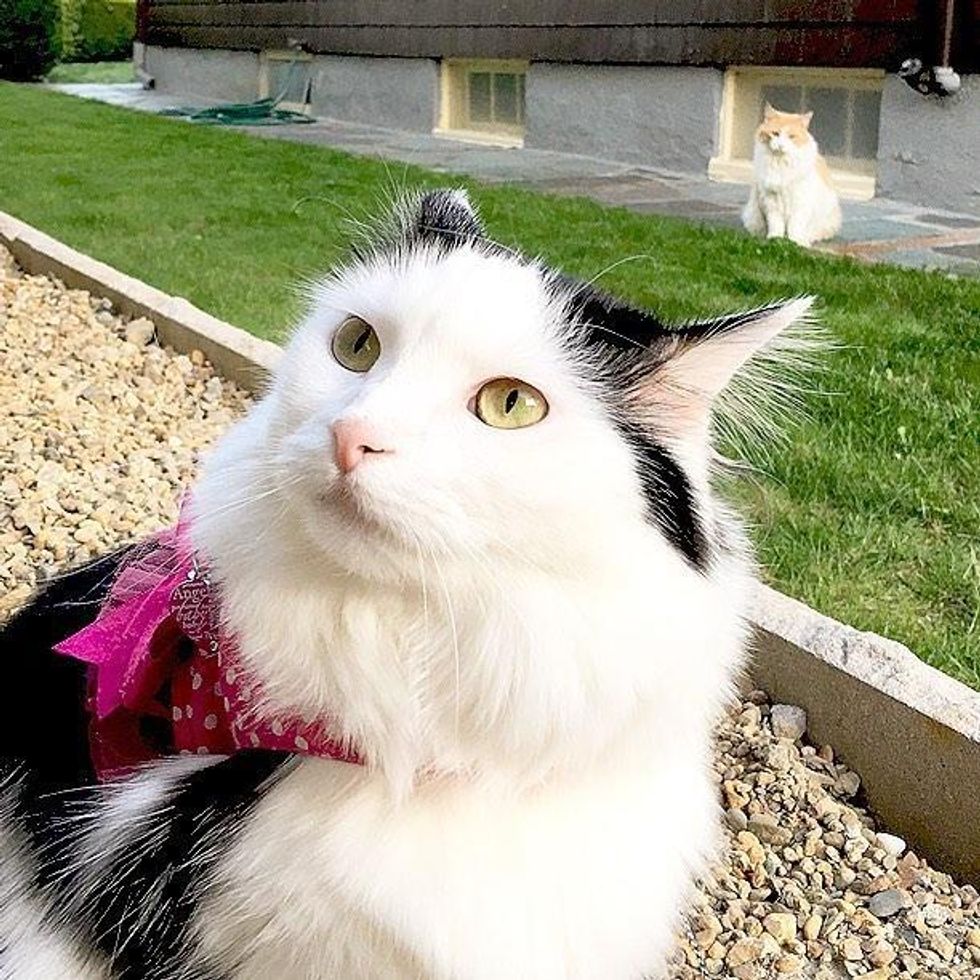 Sophie, a rescue kitty from Boston, was adopted in 2014. A few months after she moved into her forever home, she took her first walk with her human mom around the neighborhood and fell in love with it.

"I remember when I first started taking her out on the leash Scottie would come over and watch from across the lawn or driveway without coming too close," Sophie's human mom told Love Meow.

During the first few weeks he would sit and stare from a distance, always positioning himself within site of what Sophie was up to. 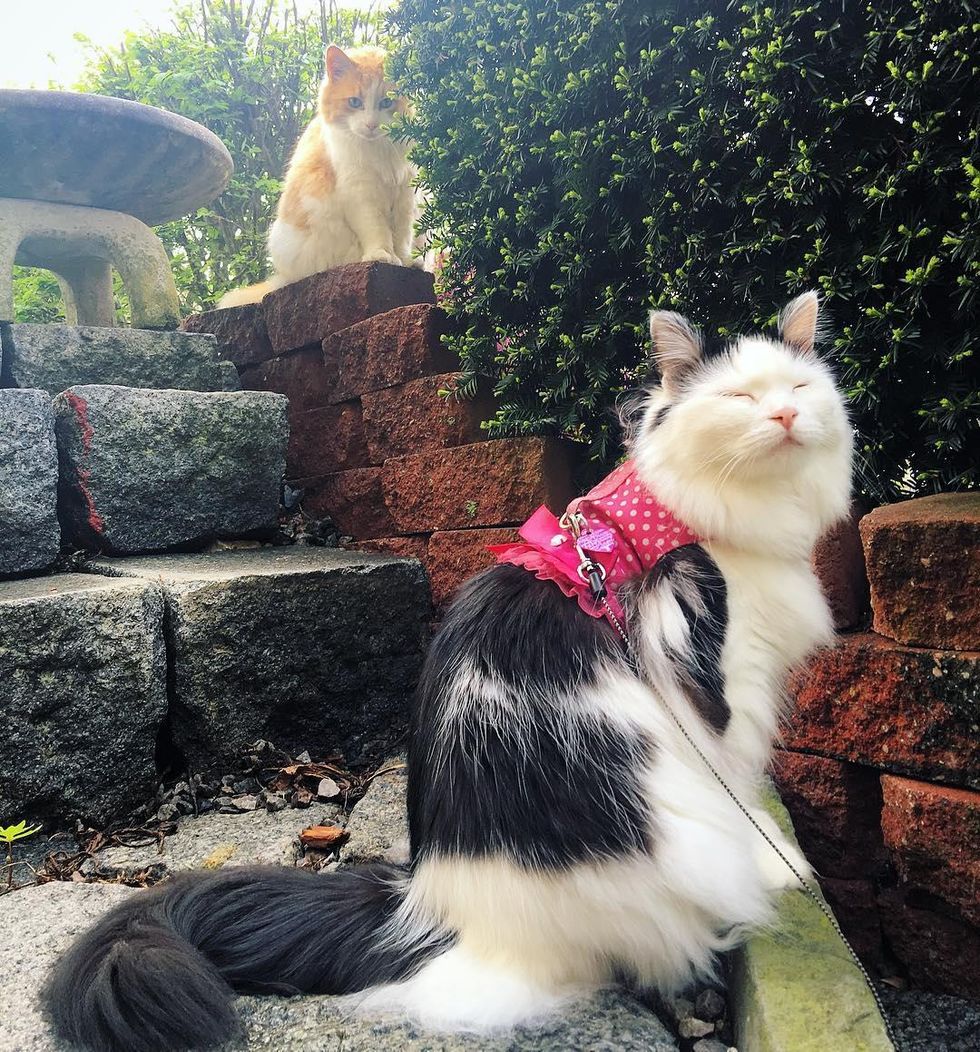 "Sophie was too busy for him... but soon he became bolder and would sit closer like he was waiting for an invite to join in. Sophie didn't seem to mind he was there as long as she didn't have to pay attention to him much."

After a few weeks, Scottie mustered enough courage to introduce himself to the girl of his dreams. 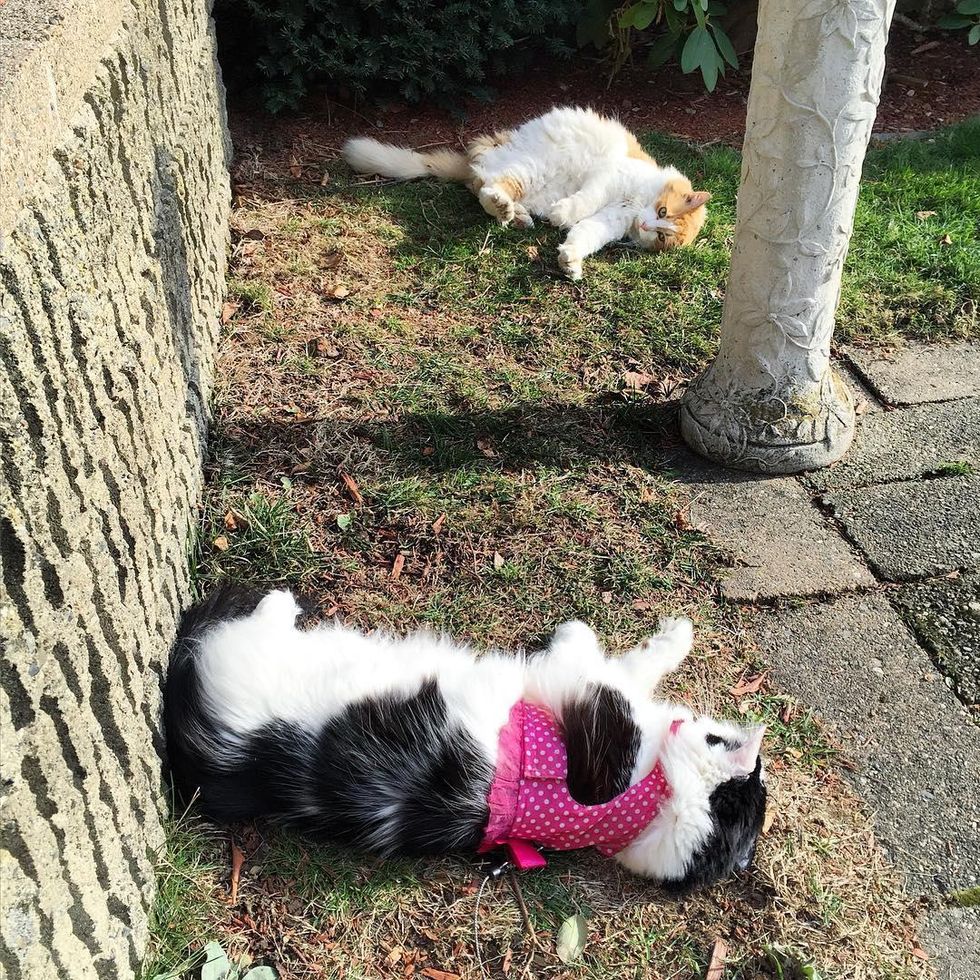 "His persistence started paying off and soon Sophie came to expect him on her adventures and allowed him to sit with her," she told Love Meow.

Since then whenever Sophie is out for a walk, almost immediately the ginger boy comes running. 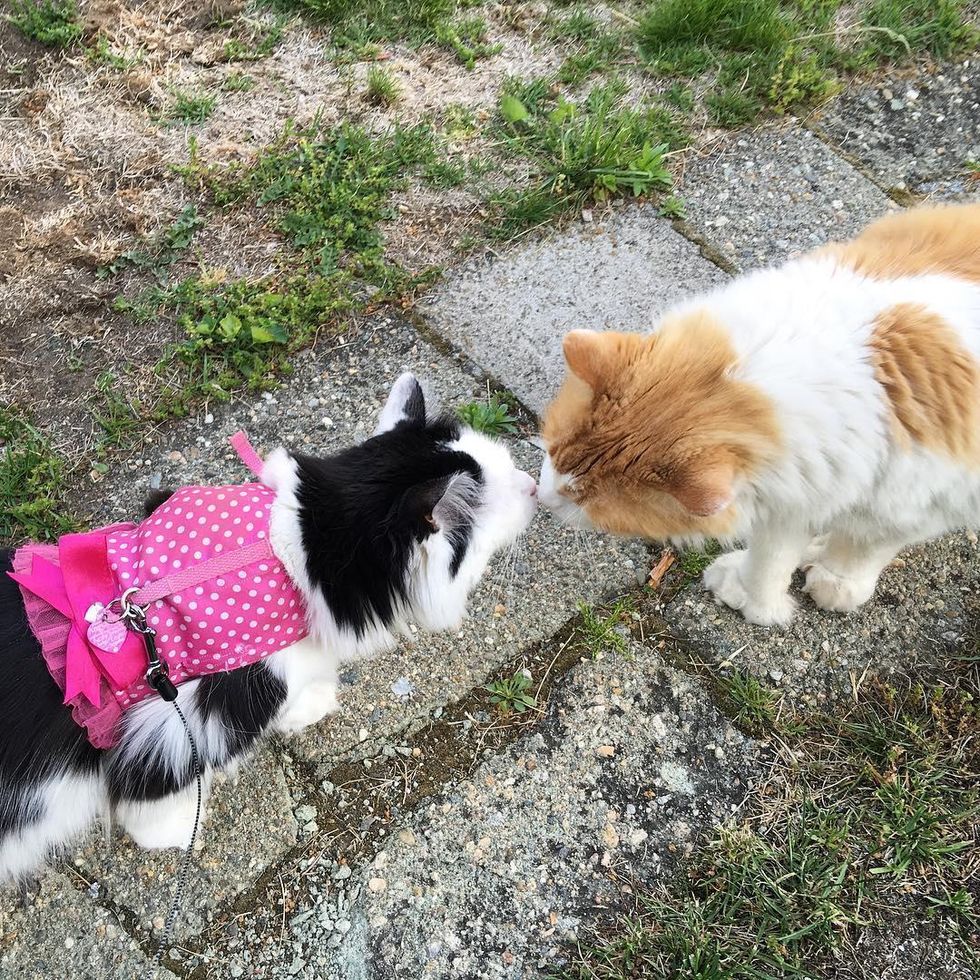 "The first thing I do when I get up in the morning is open the porch door so Sophie can look outside. Many mornings Scottie is sitting on his driveway looking up and they watch each other.

"If Scottie sees us sitting on the porch from his lawn he walks over, politely uses the sidewalk, and waits hoping for her to come down." 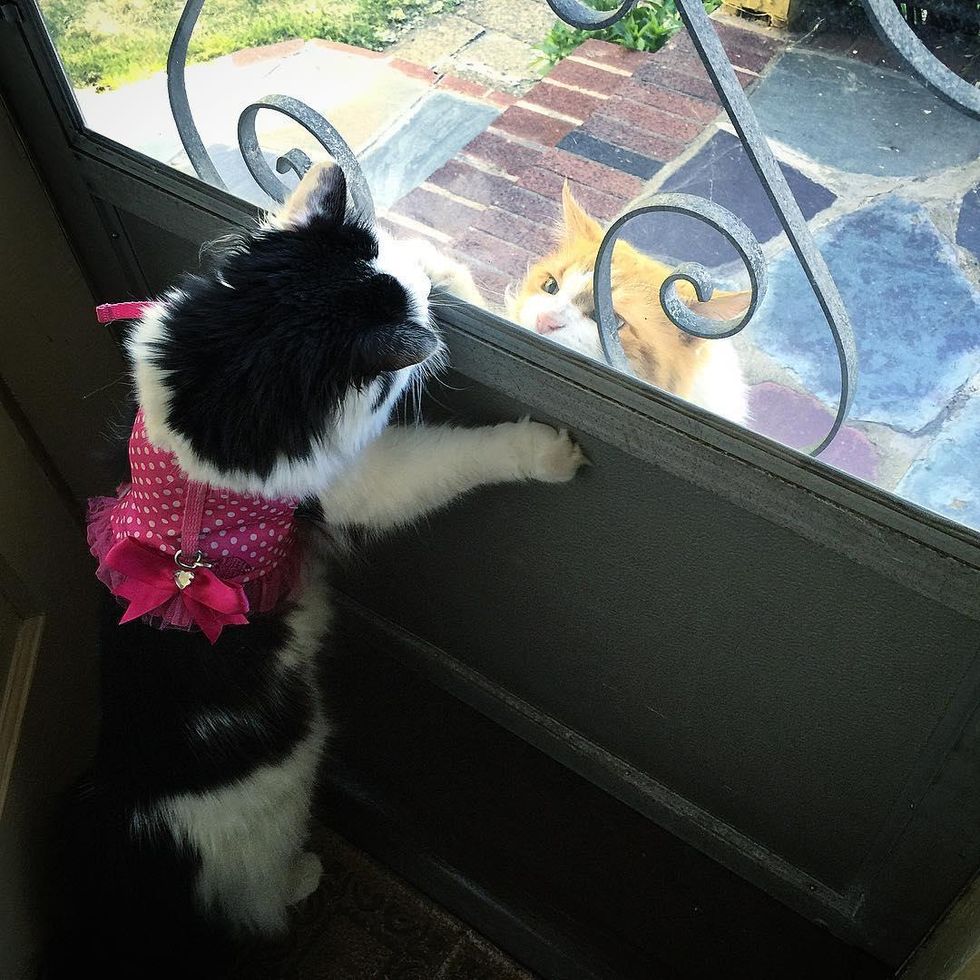 "They are so cute together. Whatever Sophie does, he does too," she told Love Meow.

"If Sophie is monitoring the bird bath, so is Scottie. He follows whatever she is doing from the time we are outside until we go in." 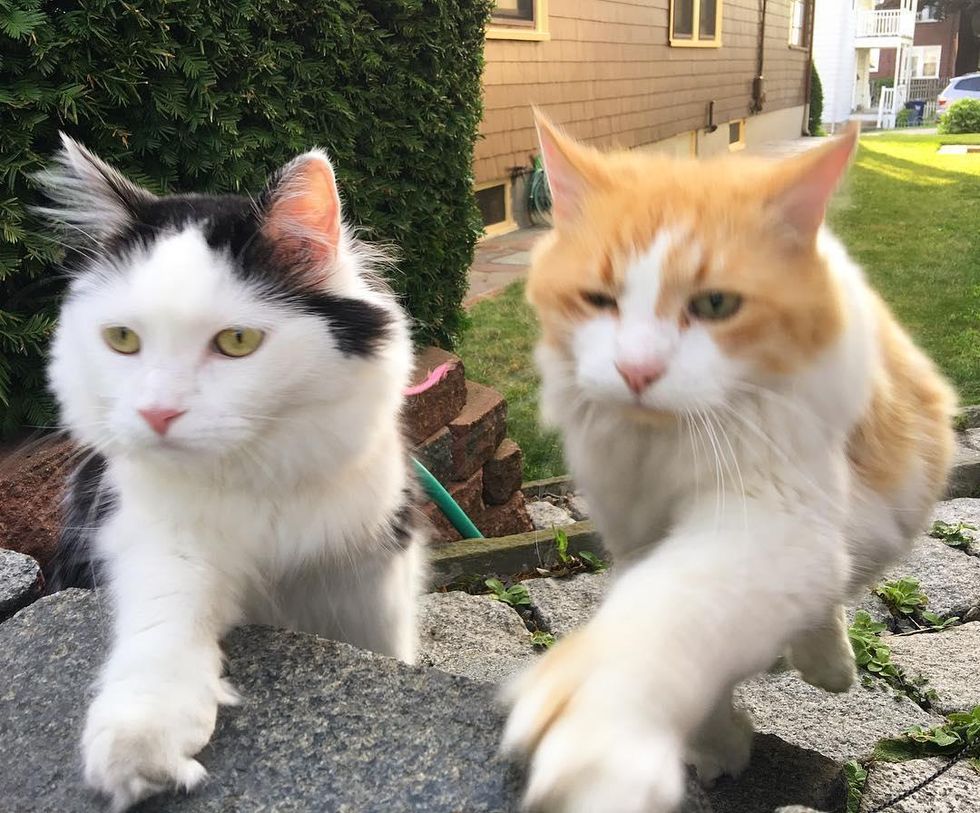 "Eventually they started watching the hedge together each night, then cruising the yard together."

"If you see Sophie out, chances are Scottie is a few steps behind." 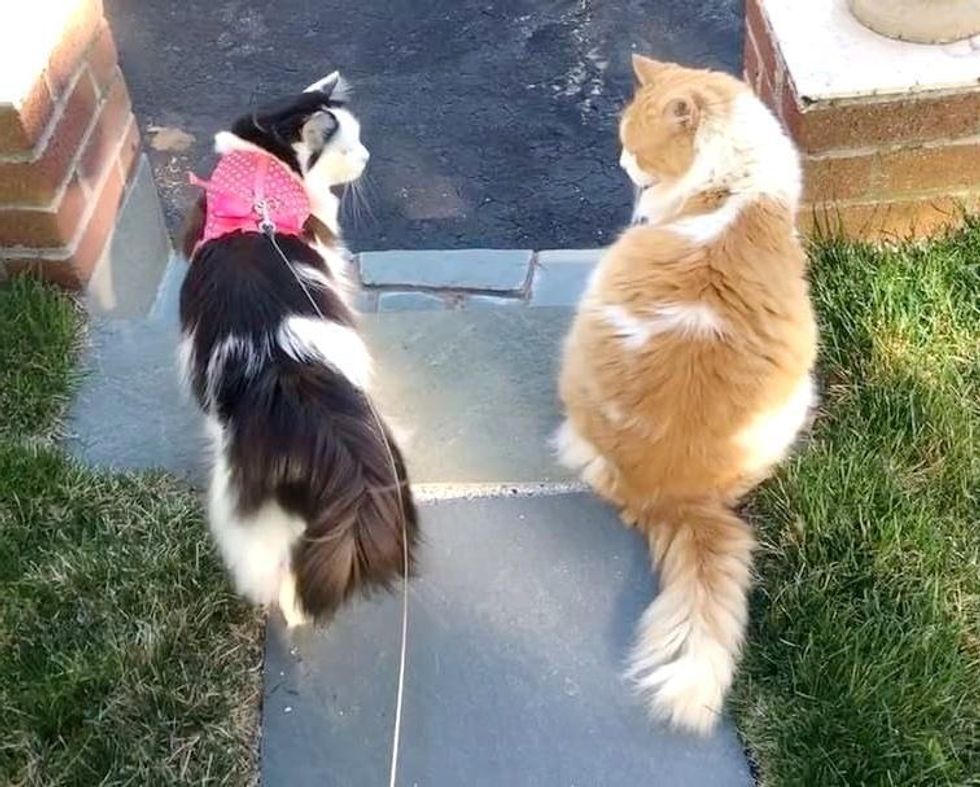 "Scottie really is the cutest 'boy next door' neighbor. All he ever really wanted was to join in and be pals....Well...and maybe a quick kiss."

Scottie comes back for Sophie!

Related story: Couple Mourning Their Cat Find a Note from a Stranger Whose Life was Touched by Their Cat…