A street cat walked into a family's home to have kittens. Her life was changed forever. 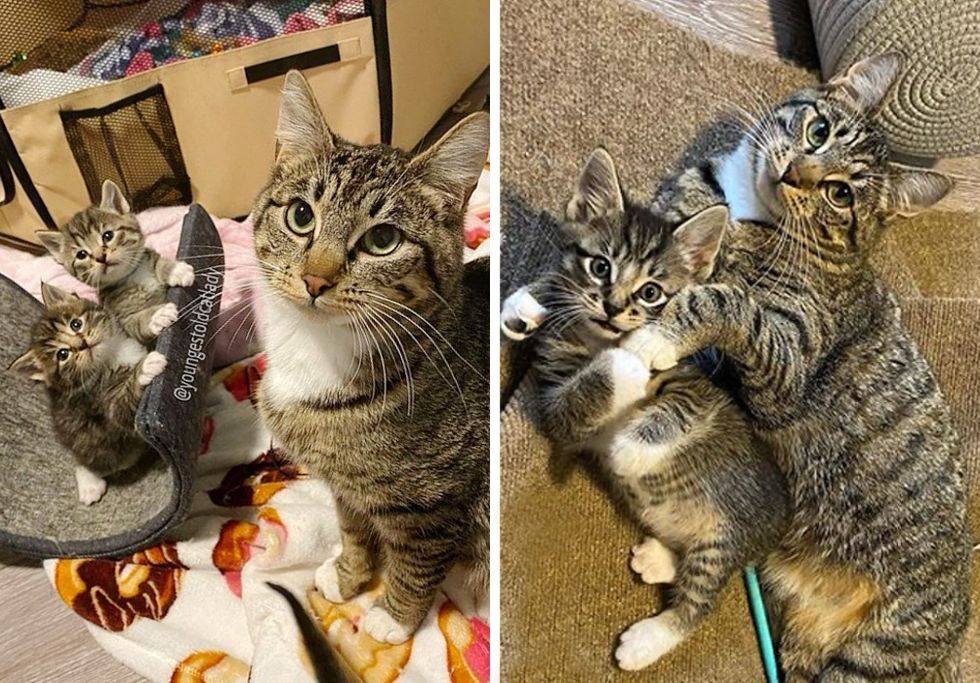 A tabby cat had been seen wandering around an apartment complex in Seattle, Washington early this year. Over time, she became acquainted with one of the families. One evening she decided to enter their apartment and look for a spot to settle in.

About an hour later, the family was surprised to find a litter of newborn kittens under their table. They reached out to the rescue community in hopes of getting this feline family the help they needed.

Ashley Morrison, an animal rescuer based in Seattle, stepped up to help. "When we got home, Moira (the cat mom) was panicked. She didn't know me and wasn't used to human interaction. She was climbing the walls and she was so scared of me," Ashley told Love Meow. 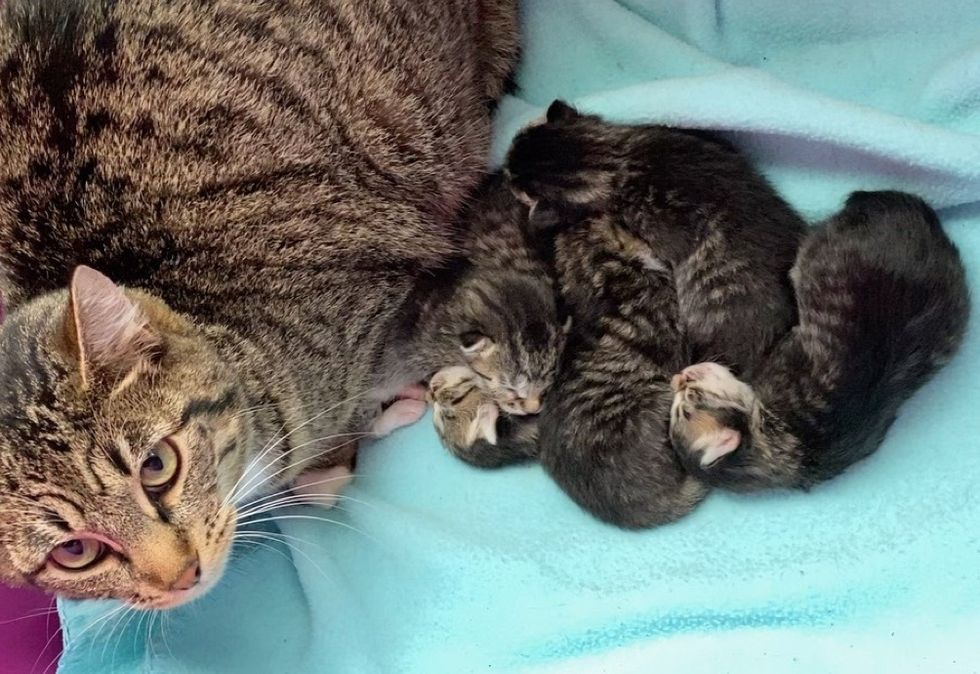 The mother cat was very frightened and used every ounce of energy, trying to escape. It took a few days for Ashley to get her permission to sit in the same room. But once her guard started to come down, beneath the fearful fasade, Moira just wanted to be loved.

Over the next few weeks, the tabby cat slowly came out of her shell. She grew to enjoy head scratches and pets, and would knead up a storm every time she was given a freshly cleaned blanket.

The first time she walked out of her nest (her safe spot) to seek pets and attention, she made it all the way to Ashley's lap. 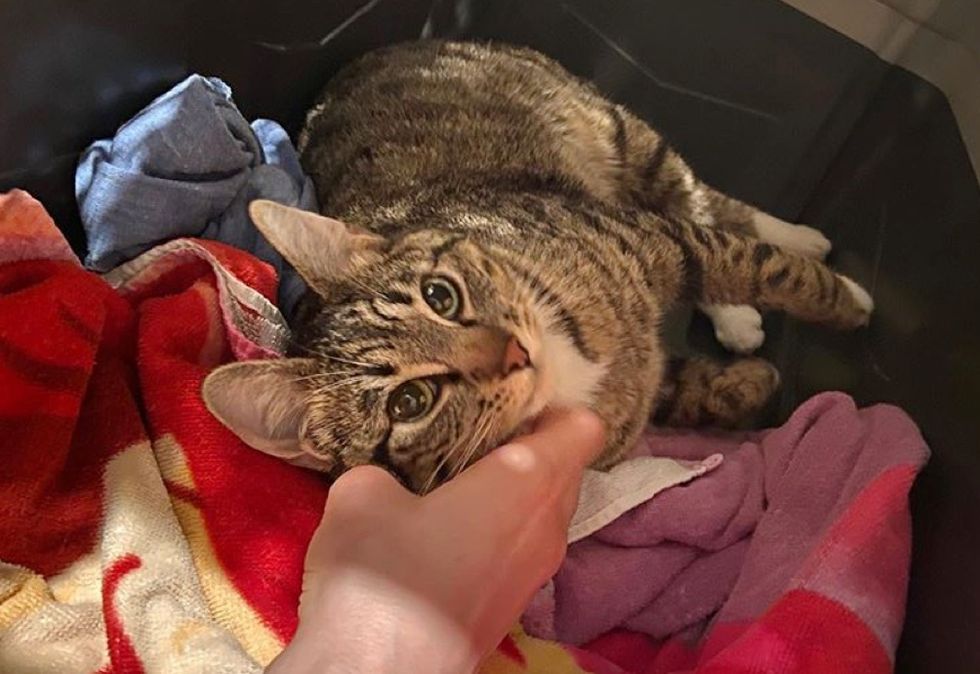 "Moira never stops making biscuits. (Before she had her kittens), she was living outside, sleeping under an apartment complex and living off food left outside for the cats," Ashley said.

"She really stuck up for herself when she walked into the apartment and refused to leave while she had her babies." 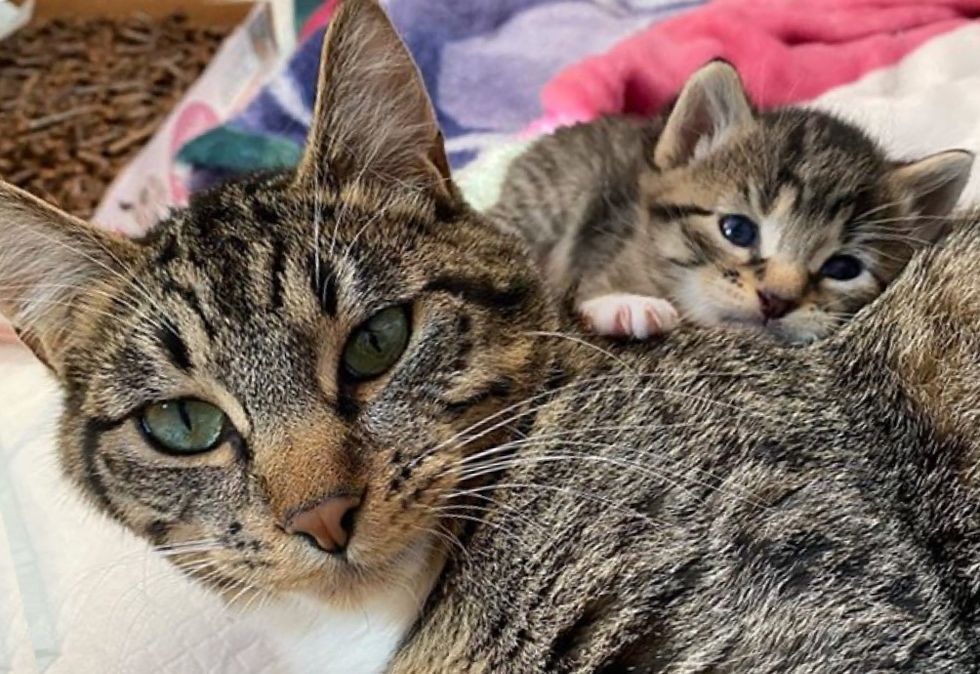 With a lot of patience, Moira was finally coming around and learning to enjoy little things in life, such as a new cat bed or a toy. She became so content that she would stretch her toes and purr.

"There is nothing I love more than seeing a former outdoor cat start to enjoy indoor cat luxuries." 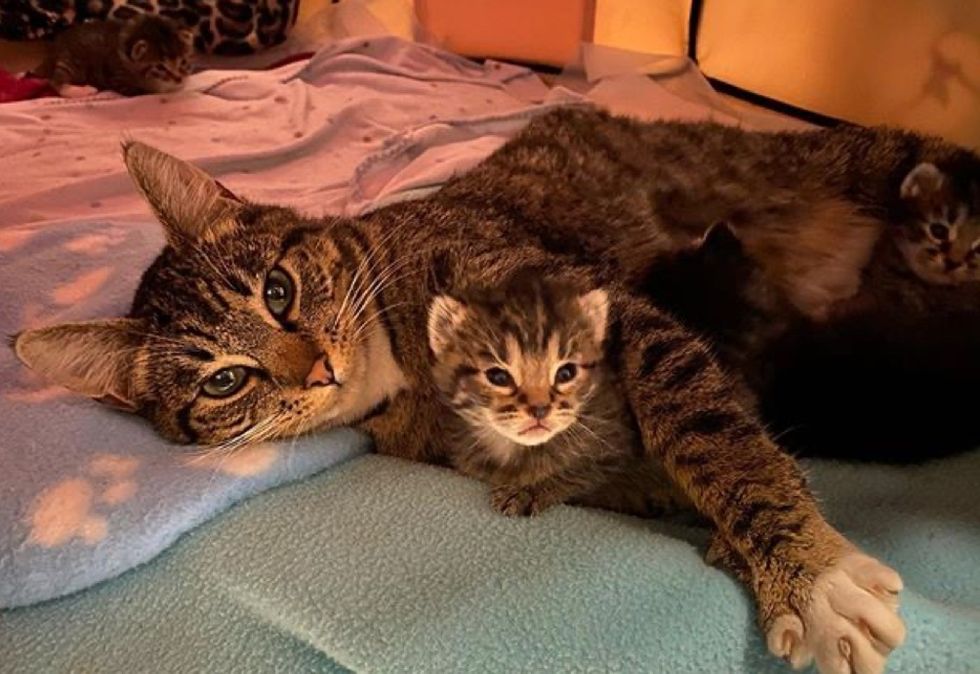 Her tabby kittens grew by leaps and bounds. They became demanding, mischievous little kitties who quickly learned to enjoy lap time with their humans.

They followed in their mom's paw-steps and tried to intimidate everything she did. 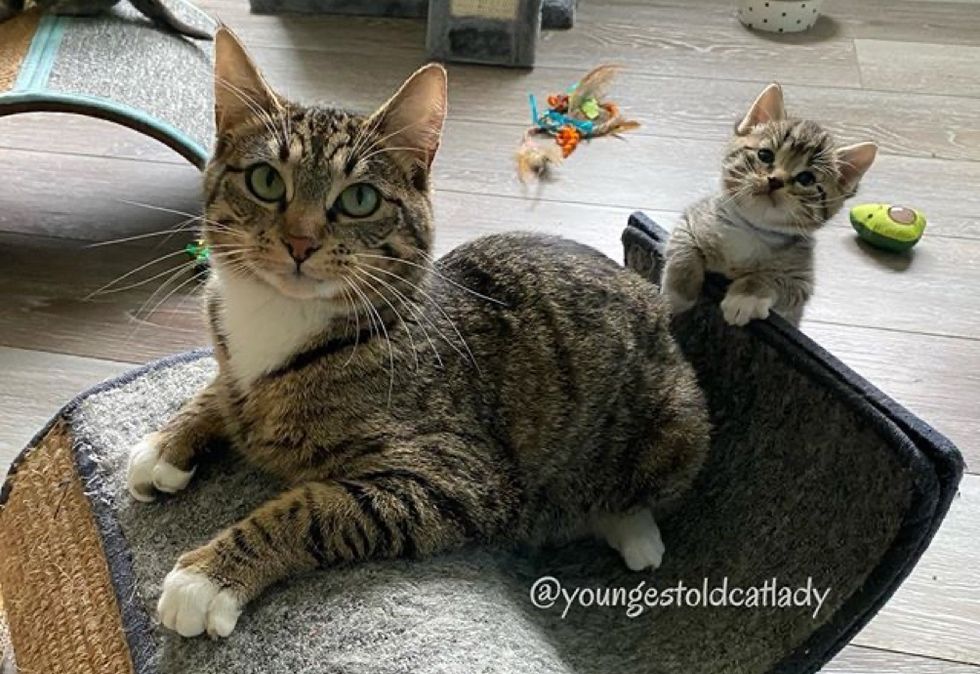 The tabby babies have blossomed into playful, rambunctious young cats.

"Moira is such a good example of why it is so important to spay and neuter not only your personal cats, but cats you see outside. 75% of kittens born outside don't make it to six months old," Ashley said.

"Moira and her kittens are the lucky ones. They are inside, warm, loved and thriving. And Moira will never live outside again." 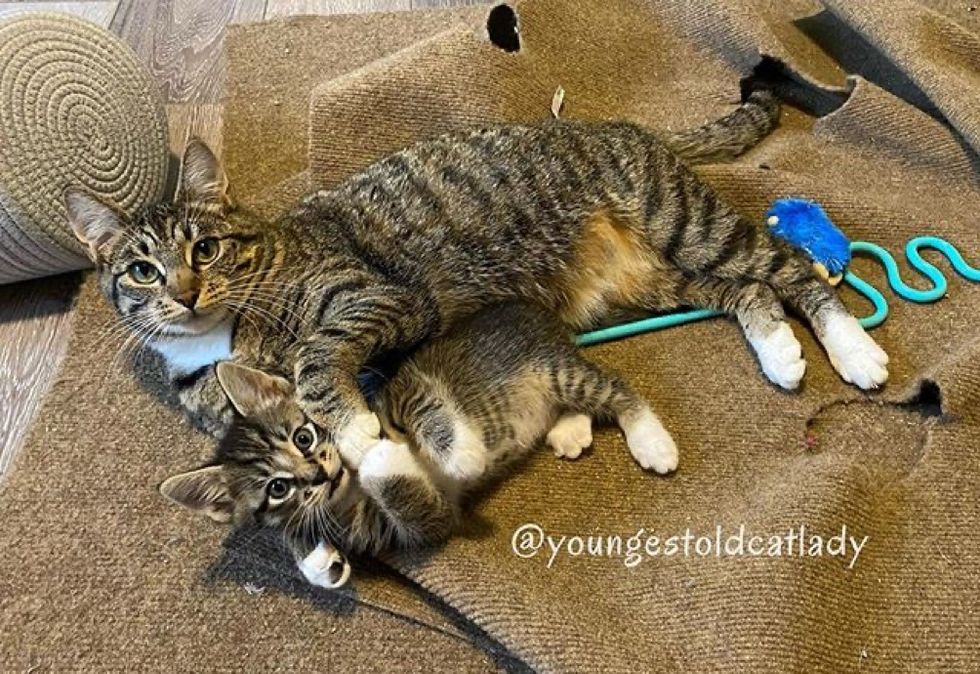 When the little family was ready for adoption, Ashley knew she wanted to find Moira a nice quiet home where she could feel safe, happy as an indoor cat.

Two months after Mama Moira was rescued, she had her dream come true. 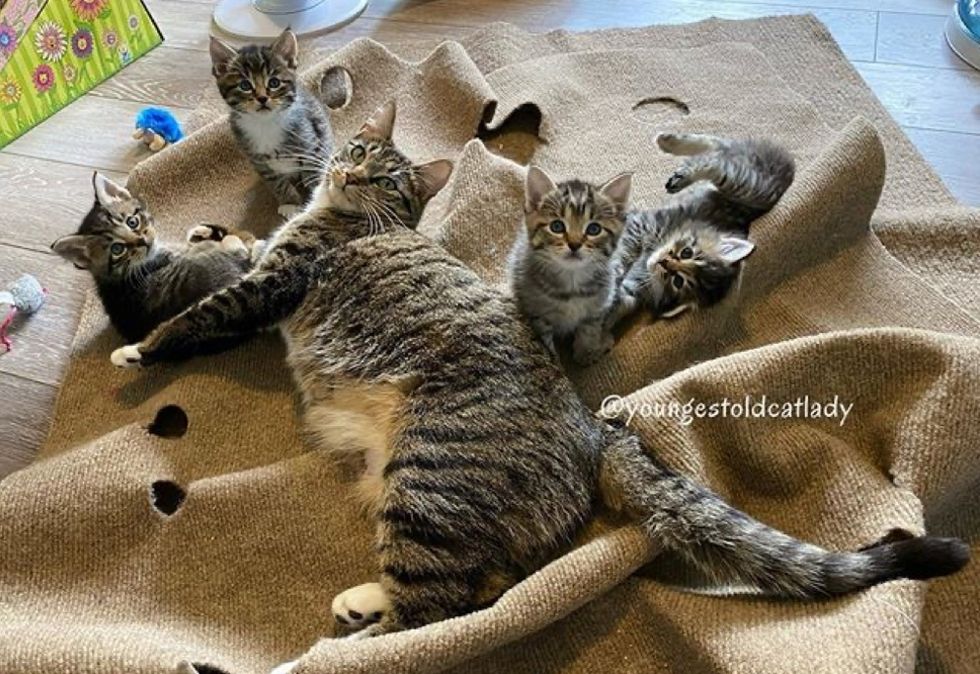 The sweet tabby has moved into her forever loving home. On the first day with her new family, she was already purring and putting her paw on her new mom's hand. 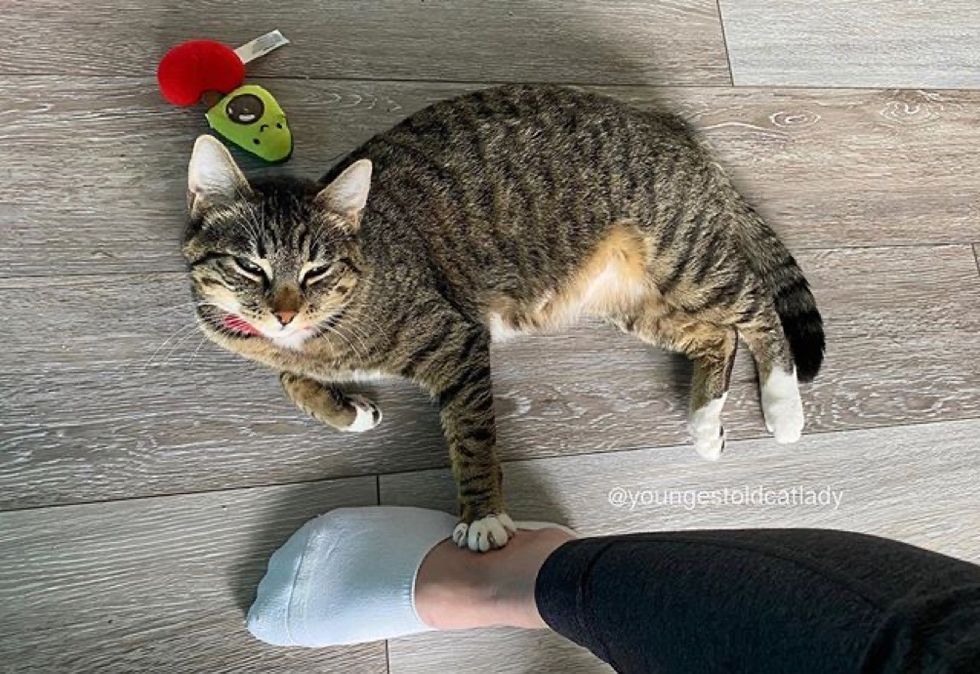 This is sweet Moira at her forever home! Her kittens have also found their loving homes.

Related story: Stray Cat Befriends a Couple and Decides to Bring Her Kitten to Them