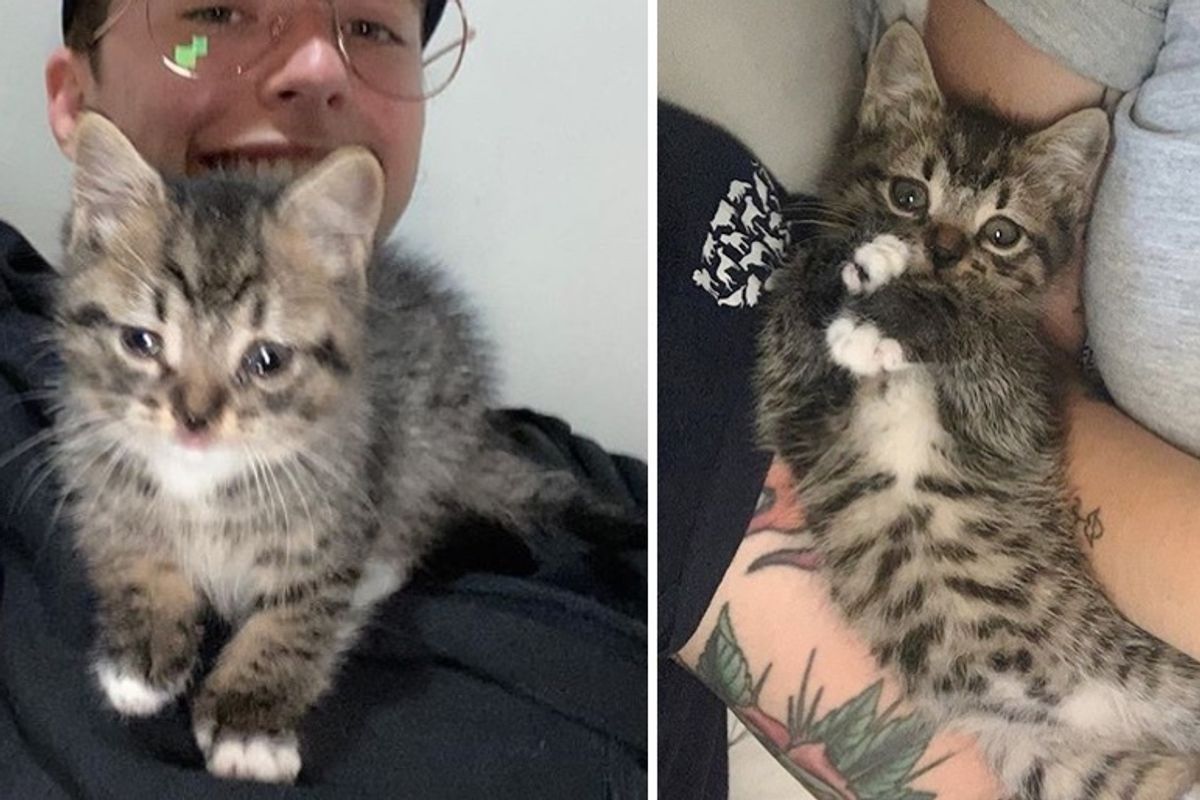 Stray Kitten Walks into Woman’s Home and Insists on Staying

A stray kitten came running into an apartment and decided to stay. 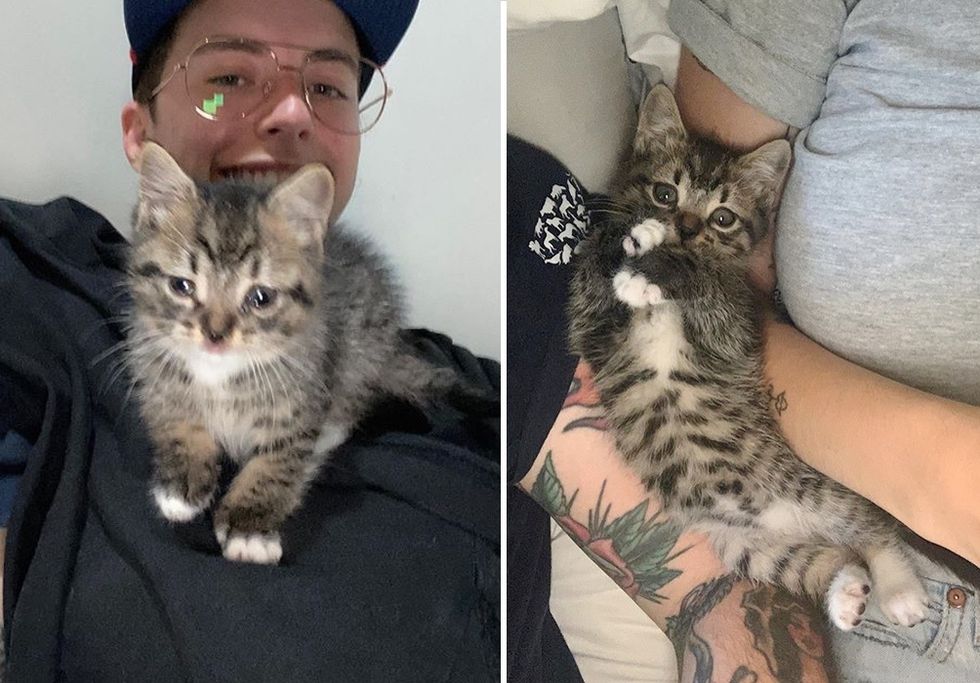 A tiny kitten gave a tenant quite a surprise when she walked into her apartment and decided to stay. Caleigh Farragher from New York spotted a little ball of fur in the hallway and realized it was a kitten.

She called out to him and the tiny tabby came running through the door and into her apartment. The maintenance door on their floor was open that day, and they believe that's how the kitten found her way into the building. After asking around their neighbors and looking for a mother cat, they confirmed that the kitten was alone and didn't have a home.

They brought him inside, cleaned him up and set up a makeshift bed for the little guy. "It was pouring rain, and we couldn't put him back out," Caleigh told Love Meow. "Once he got inside he was climbing and exploring." 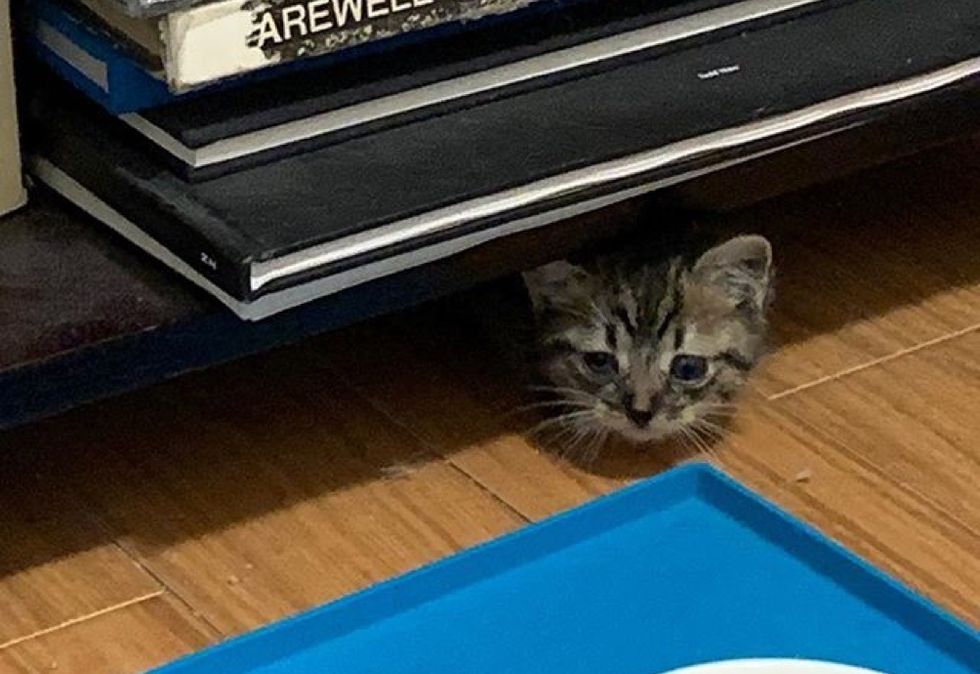 The sweet kitten was so happy to have friends that he started following them around, demanding attention and cuddles. He refused to be alone and insisted on staying close to them. Caleigh didn't have the heart to say no, knowing deep down that it was meant to be.

She named the kitty Patty after her late grandmother who adored cats. "My grandma was the biggest cat lover. It feels like she's come back to us through the kitten."

When they later found out that the kitten is a boy, the name Patty stayed. "He has a clean bill of health and a new home." 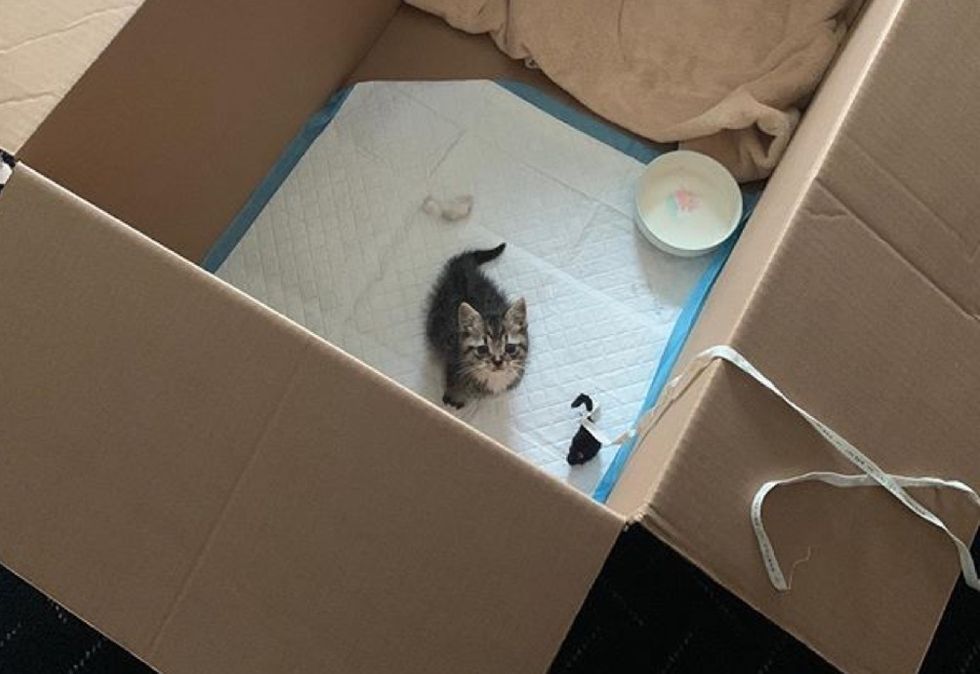 The kitten quickly claimed the apartment as his own and became his humans closest confidant. He doesn't understand the concept of privacy and if he wants something, he won't take no for an answer.

Patty was tiny but had a mighty personality. He was always on the lookout for mischief. 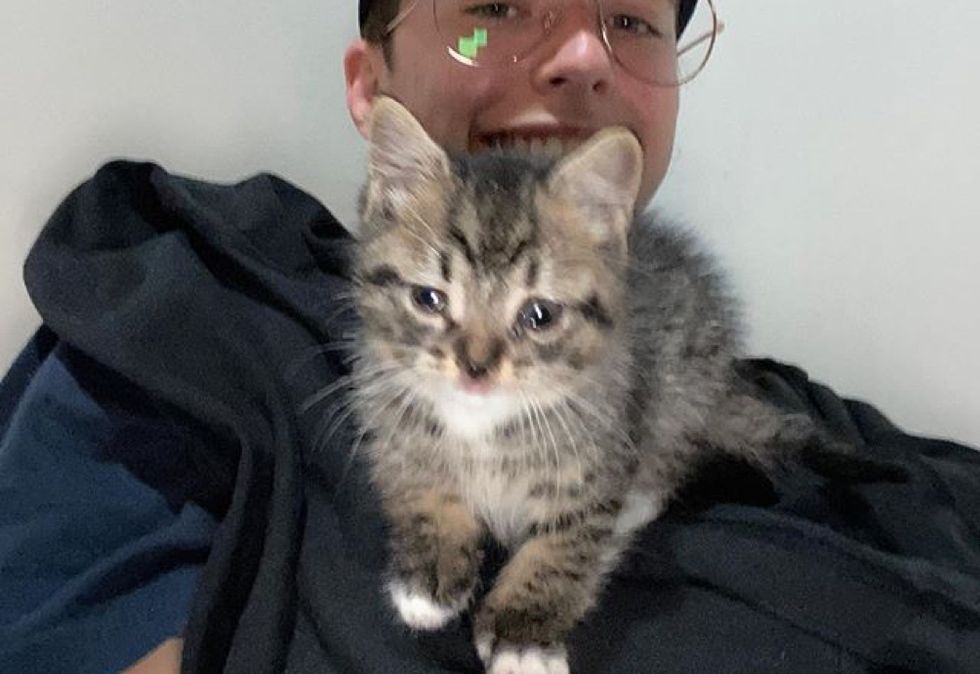 He would tag along with his humans everywhere around the house, wrestling with their feet and cuddling on their heads or in the crook of their necks.

Caleigh bottle fed him until he was ready to wean. The little guy loved his food and was thriving in his new home. 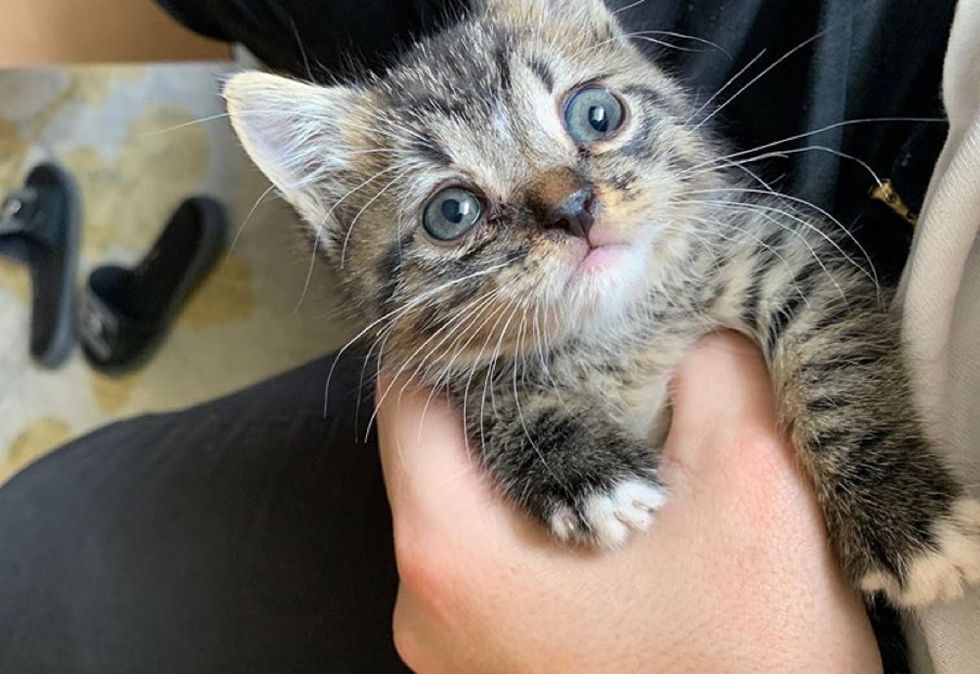 The fearless kitty has discovered his own reflection in a mirror and can turn anything he likes into cat toys.

He is so playful and active that he will try to catch anything that moves, and pounce on it. As soon as his humans sit down on the couch, the kitten hops right on and starts to cuddle. He wants to be in the midst of the action at all times. 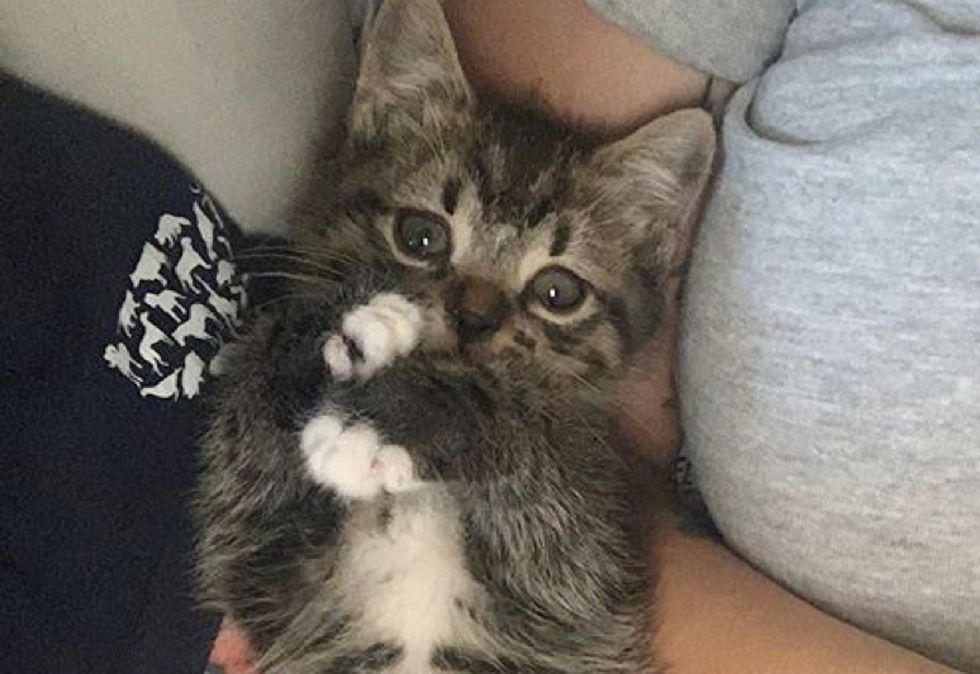 The little guy will offer a "helping" paw whenever he gets a chance. He will leisurely walk on their computer or crash a workout session to announce his presence.

Watch the little kitten in this cute video:

The rambunctious mischief-maker keeps his people entertained with his daily antics. He is packed with energy and runs the house like a boss. 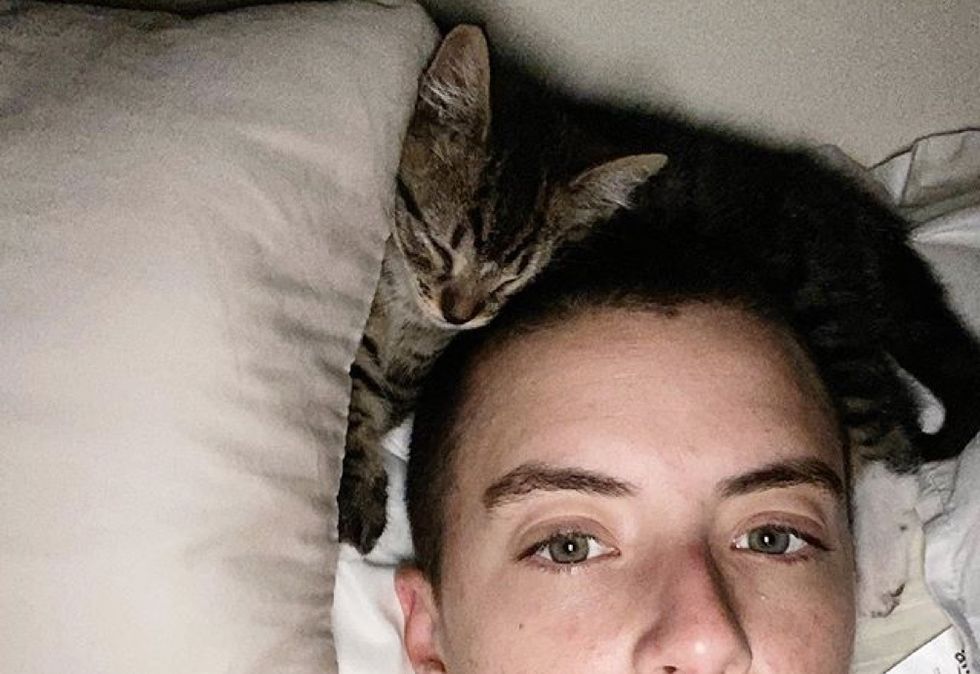 Patty has grown by leaps and bounds since the day he showed up at the apartment.

He enjoys being the center of attention and wants to know what his humans are doing all the time. The little former stray has turned into a professional supervisor. 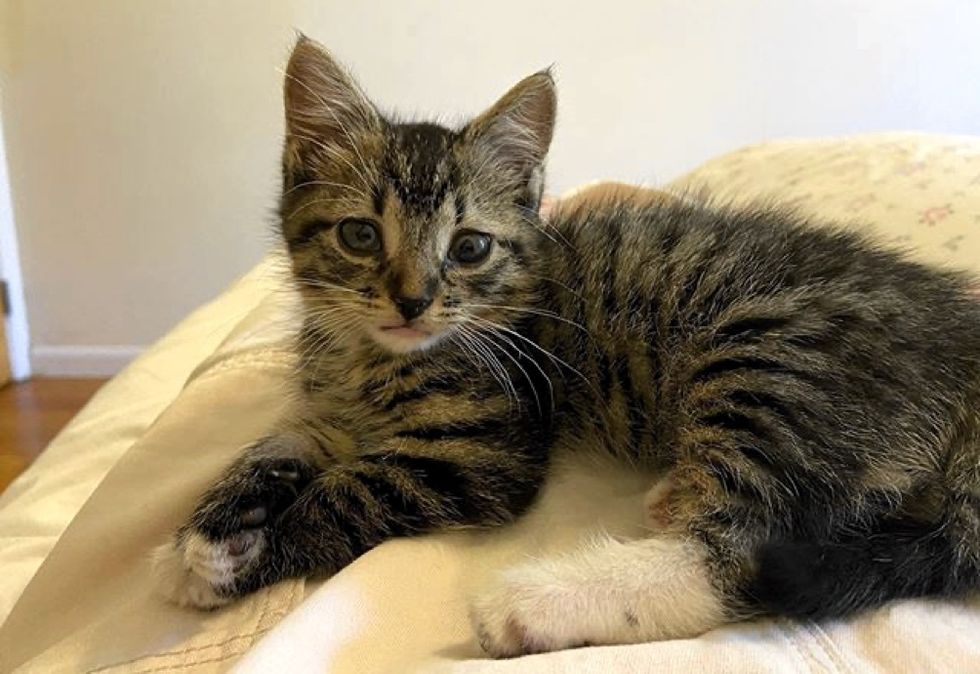 Caleigh never thought a cat would come into her home and forever change her life.

The little tabby has blossomed into a young cat. He continues to nap in his people's arms every day, and his personality is shining through. 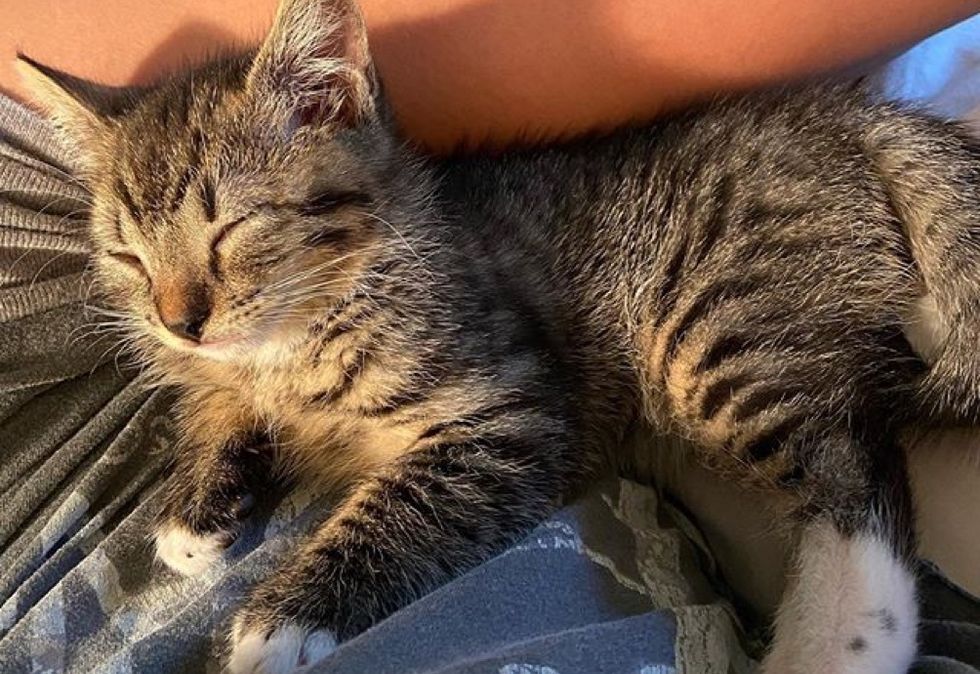